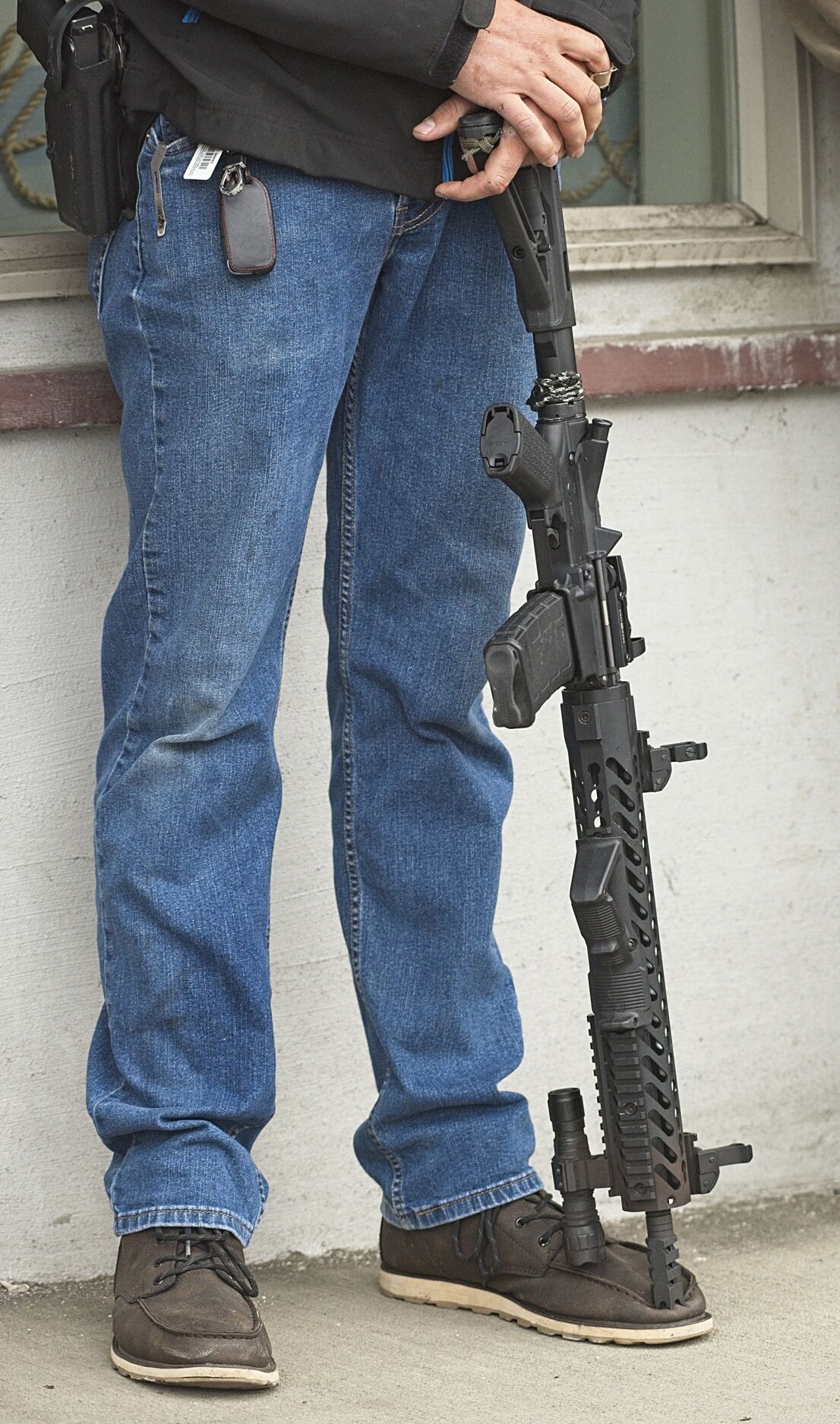 About three dozen people on the opposite side of Main Street were there to assist the police if any violence broke out. Some brought their assault rifles, and other firearms. 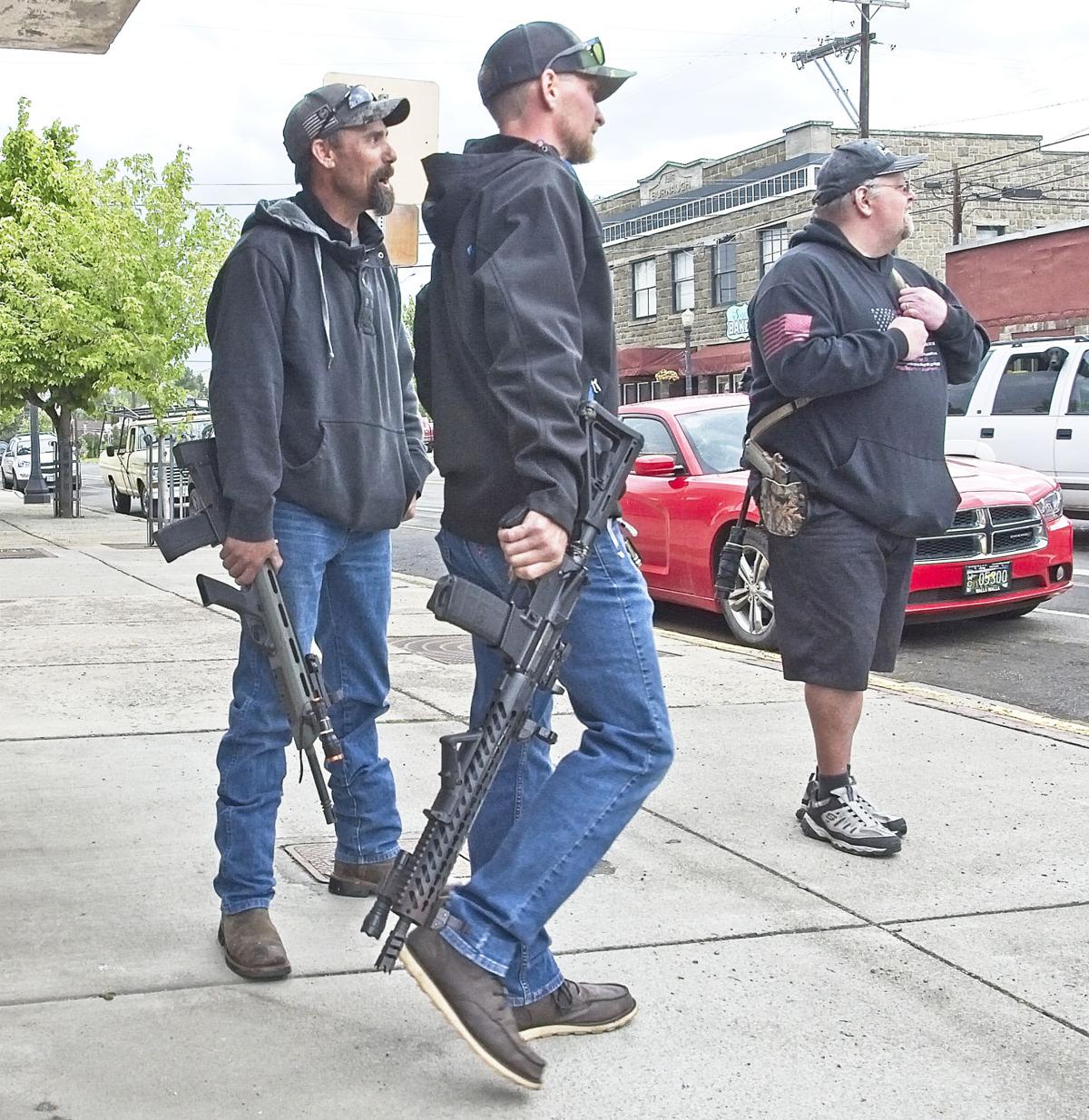 About three dozen people on the opposite side of Main Street were there to assist the police if any violence broke out. Some brought their assault rifles, and other firearms.

Posts on social media deemed to be threatening gave a number of would-be Black Lives Matter protesters pause about attending the June 5 event at the Wallowa County Courthouse.

“I was going to take my kids, but after reading Facebook posts and talking with people, decided to leave the kids at home, but go myself,” said one protester, speaking on conditions of anonymity. “My kids had expressed interest in attending but received numerous warnings prior to the demonstration that it would be unsafe to do because men were coming with guns and had warned people that Antifa was here,” said another.

Maxville Heritage Interpretive Center founder Gwen Trice, who is black and grew up in La Grande, said that she thought about going to the protest, but after reading what she called “the rhetoric on Facebook pages,” decided against attending. “It just brought back everything that has happened to me since I was eight years old,” she said. “ In the back of my mind I even thought people might be coming to kill us.” Trice thanked Chief Fish for bringing in more law enforcement and ensuring that everyone was safe.

The armed contingent showed up because outside agitators including Antifa were said to be coming to disrupt the event, and create chaos.

“BLM AND ANTIFA have been spotted in town. If anyone wants to join myself David and others lets meet at 5pm Friday on Main street.” noted a Facebook post by Wallowa County resident Mariesa Hess.

Joe Whittle remarked on the local Black Lives Matter Facebook pages “…our Black relatives were too unnerved to attend largely because of the armed white counter protest presence expected there.”

Some online posts made on Thursday were deleted from Facebook by Friday afternoon. Protester Jacqueline Espinoza said that some messages were posted on Wallowa Valley Online, but then deleted.

“The Black Lives Matter protesters were subject to numerous, often detailed online threats during the days leading up to the event,” Jessica Espinoza said. “These threats included ‘stomp them to death,’ ‘kick their knees in’ and ‘get your guns and shoot them.’ They were threatened with getting shot in a multitude of ways.”

Despite the police presence, some protesters felt and were threatened during the protest. Espinoza said that “during the 8:46 minutes of silence, a man stumbled through the crowd slurring obscenities … while a gun swung from his hip into the faces of some protesters.”

Many community members made the choice to stay home because of the threats, and spoke on condition of anonymity.

Wallowa County Sheriff Steve Rogers said he thought the protest was peaceful and the armed contingent on the north side of Main Street remained respectful and even supportive of the protest.

Commissioner John Hillock told an armed man to get down off the roof of the Duhtli building, after Sheriff Steve Rogers had asked two to leave the roof earlier.

“We don’t need that sort of thing here,” Hillock said.

Some post-protest comments on Facebook also were fraught with suspicion. “These are the same groups that took over Seattle, I thought they are peaceful?” one poster said on the Chieftain Facebook site.

In other communities, including Klamath Falls, Medford, Grants Pass, Coquille and La Grande, Black Lives Matter protests were faced with similar armed groups that showed up to guard against busloads of Antifa and outside agitators rumored on social media posts who would create chaos and destroy buildings and business. In Klamath Falls, armed men were arrested for alcohol-related reasons and disorderly conduct. In La Grande, a man who was carrying a long rifle was arrested after scuffling with protestors, and in Medford a man who waved a gun at protestors was arrested and charged with menacing and disorderly conduct, according to The Oregonian.

In Enterprise, the protestors and the armed contingent found 22 law enforcement officers present to keep order.

“If the guys with guns were truly sympathetic to our cause,” said one protester, “why didn’t they just leave their guns somewhere and come across the street and join us?”