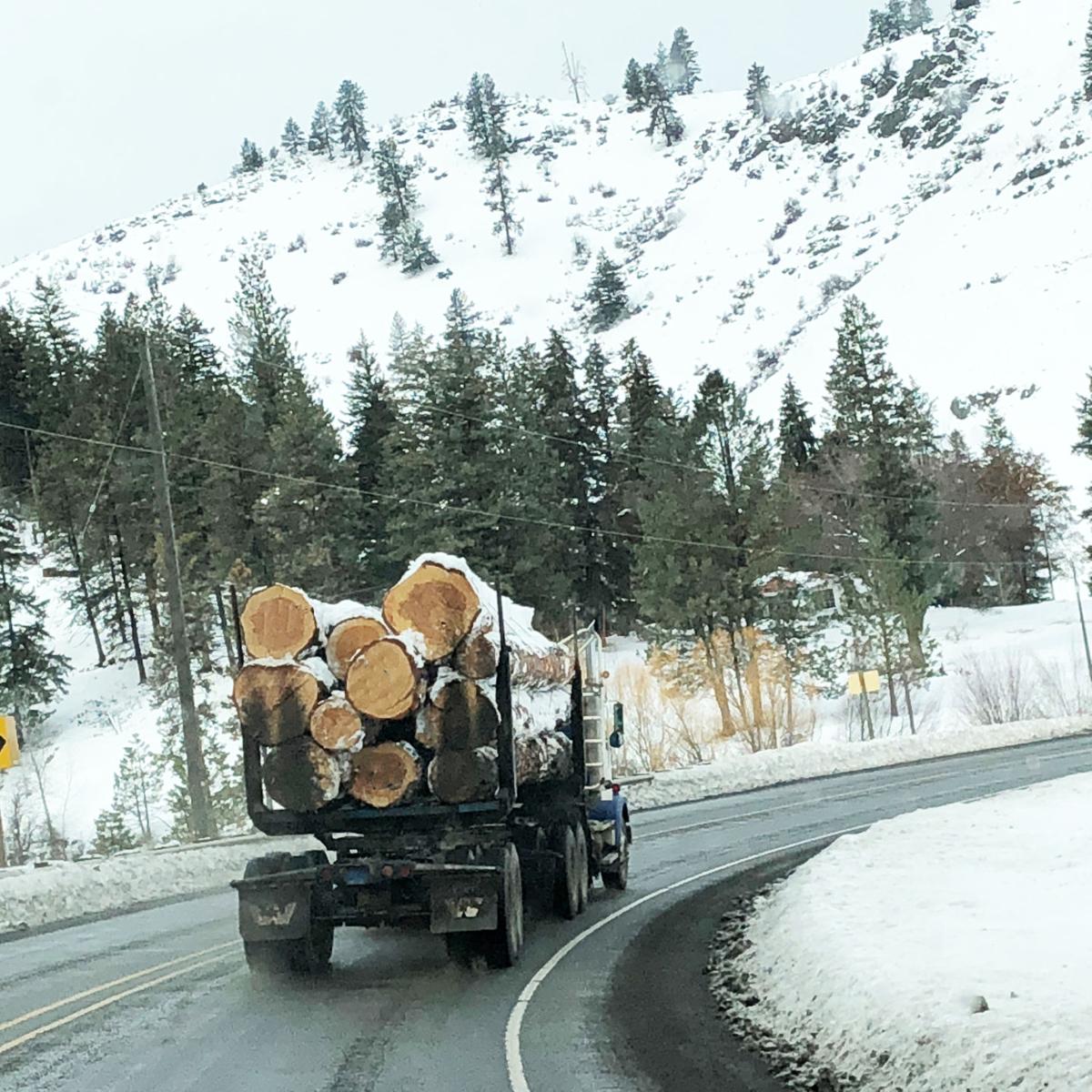 A late-winter/early spring load of logs heads for the mill along Ore. Highway 82. 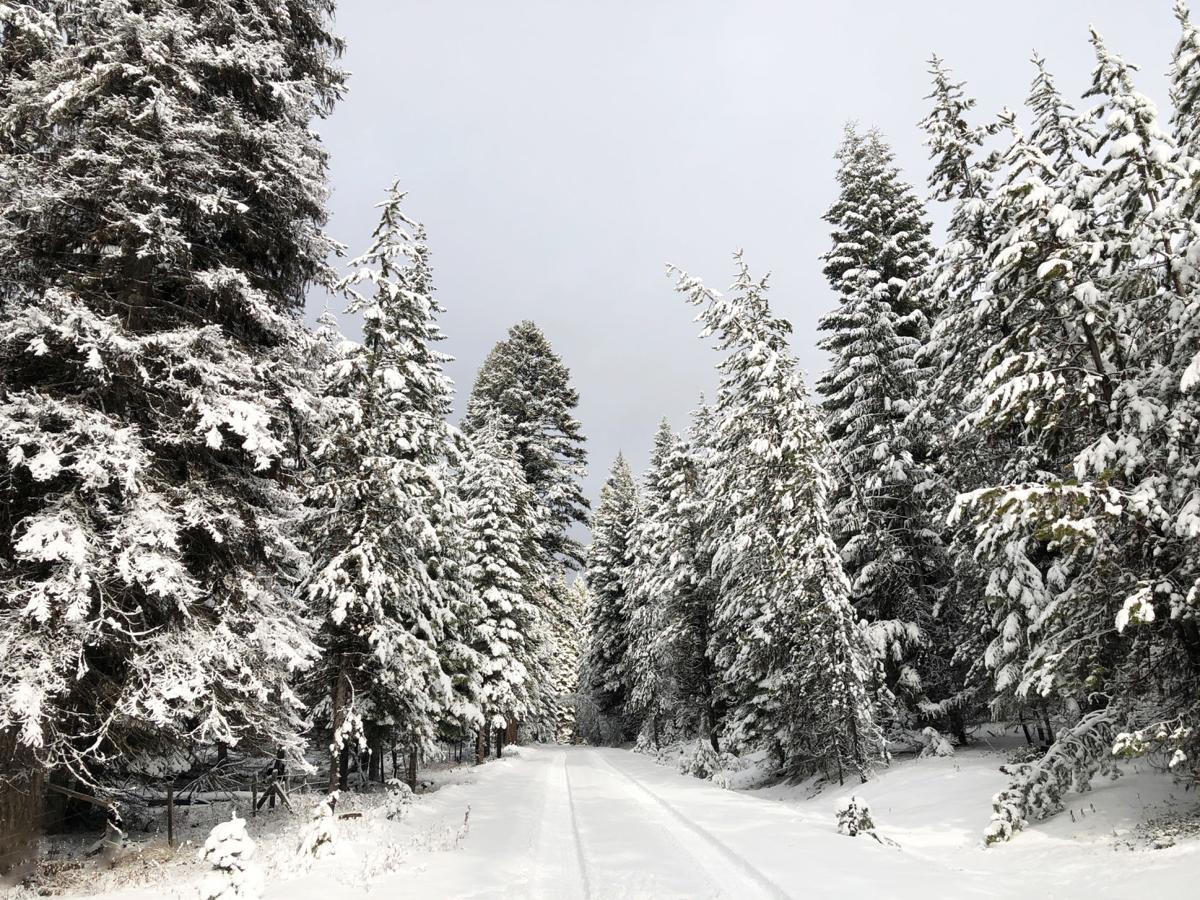 A late-winter/early spring load of logs heads for the mill along Ore. Highway 82.

It’s easy to think of logging as mostly a fair-weather practice relegated to the more balmy weather. But winter logging can offer a better option for protection of ground-cover and reduced soil compaction, among other benefits.

Clint Foster, the U.S. Forest Service silviculturist for the Eagle Cap Ranger District, noted one logging project on U.S. Forest Service land currently underway is the Cold Canal sale, on the Sheep Ridge Divide off of the USFS 39 road. Integrated Biomass Resources of Wallowa purchased the 877-acre sale that includes 2.7 mbf. Mbf is 1,000 times a 1-foot length of a board, 1 foot wide and 1 inch thick.

Foster said that ground conditions are the main reason that a few projects are stipulated for wintertime.

“Usually when we do wintertime logging, it’s to protect soil resources,” he said. “If, during the planning or the NEPA (National Environmental Policy Act) phase of a project, if it’s determined that the detrimental soil conditions are expected to be greater than 20%, then winter logging is one mitigation factor we use.”

He added that three or four units of the Cold Canal sale required winter logging because of impacted soils.

Foster also mentioned botanical resources as a reason for required winter logging. For example, he mentioned that the 275-acre Lostine Corridor Public Safety Project, which will allow for about 4.6 mbf of timber removal has a certain amount of wintertime logging because of the presence of the Moonwort plant.

Although they are not federally listed species, the plant is on the Region 6 sensitive species list, and identified as an outstanding remarkable botanical value in the 1993 Lostine Wild and Scenic River Plan. Also, logging in the popular tourist area is restricted during the recreational season to avoid potentially hazardous conflicts between log trucks and other vehicles.

Some timber sales that involve Detrimental Soil Conditions soil offer the purchaser or logger the opportunity to choose between at least two options:

“They have the option to winter log, or if they decide to log during the dry season, then they have to sub-soil rip X-amount of acres of skid trails and landings,” he said.

Foster added an additional option is to de-compact historic roads closed in past decisions.

“There’s a lot of trucks coming down, and there’s a lot of users of the corridor in the summer,” he said. “We felt it would be better to go winter logging.”

The parcels from the Lower Joseph Creek Restoration Project will most likely see some wintertime logging opportunities although the only timber sale offered thus far received no bids.

Over on the Umatilla National Forest, they don’t see much winter logging in the Wallowa County portion of the forest. Mike Rassbach is the USFS district ranger of the area.

“At this time, we don’t have any active sales in Wallowa County that will be logged this winter,” he said.

The ranger said that some wintertime logging occurred on a salvage sale two years ago in the area, but it’s a rarity.

“That country up there, the snow gets so deep, it can be pretty expensive to haul through the winter, but they did, surprisingly,” he said.

Rassbach said one timber sale is coming up on the Wallowa County portion of the forest, but noted it doesn’t have wintertime restrictions, so it was unlikely to get logged in winter.

Mike Witherrite, a local logger owns his own logging company, Mr. Timber. His crew just finished the Cold Canal project mentioned at the beginning of the article, said wintertime logging is a staple of his business.

“Depending on where we’re at, we’ll log into the middle of February and sometimes into March,” he said. He is currently logging on some private ground on Upper Prairie Creek. Soon, it will become too muddy to log and it won’t dry up enough for serious logging for some time, possibly as late as late May.

Like Foster, he said some units of the Cold Canal sale had wintertime stipulations.

“You had to have a foot of snow or four inches of frost to work up there on some of those units,” he said.

Surprisingly, perhaps, Witherrite said that wintertime logging generally isn’t much different than fair-weather logging. He said some of it requires waiting for roads to freeze up to access certain areas.

“Typically, it’s been by the first of January before it gets enough wintertime conditions for us to go up there the past couple of winters,” he said.

Witherrite noted that as long as the snow doesn’t accumulate to 4- or 5-foot depths, he’s fine with winter logging.

“When it gets to 4 feet, you spend all your time dealing with snow,” he said. “Your skid rigs won’t get around in it, so it’s time to go home when you get four foot of snow,” he said.