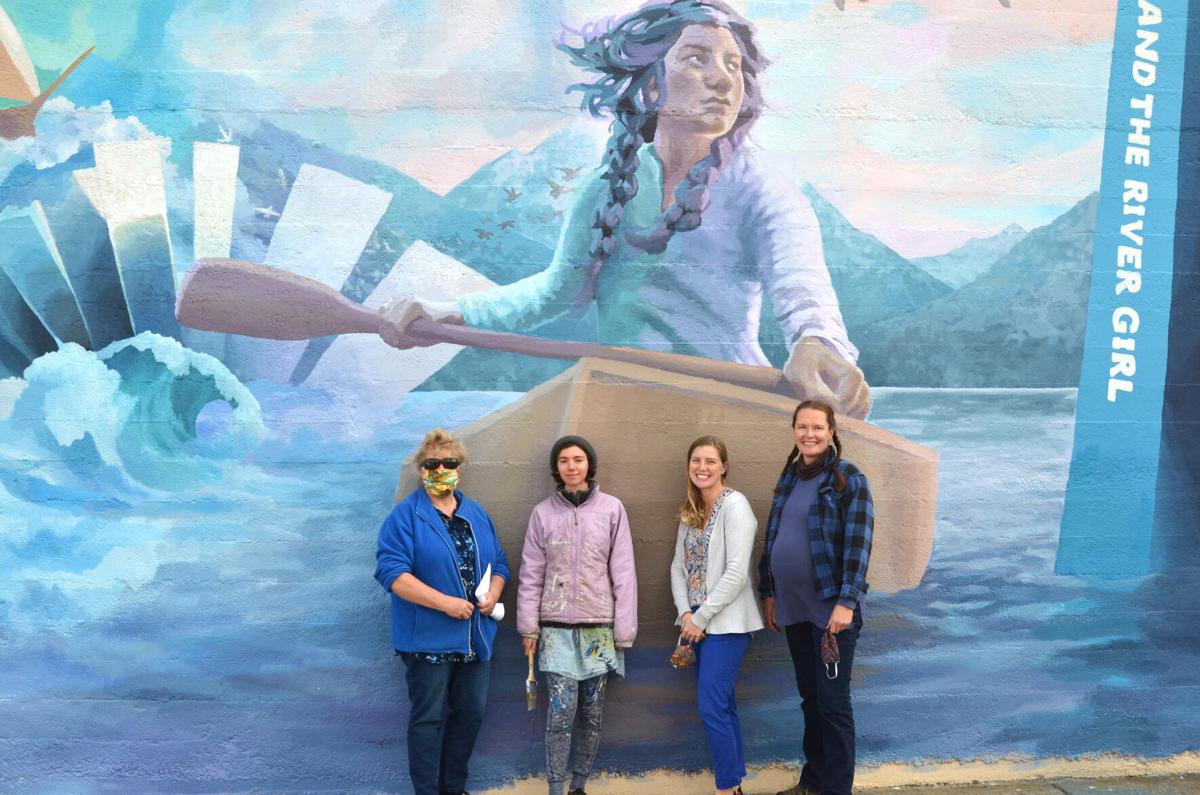 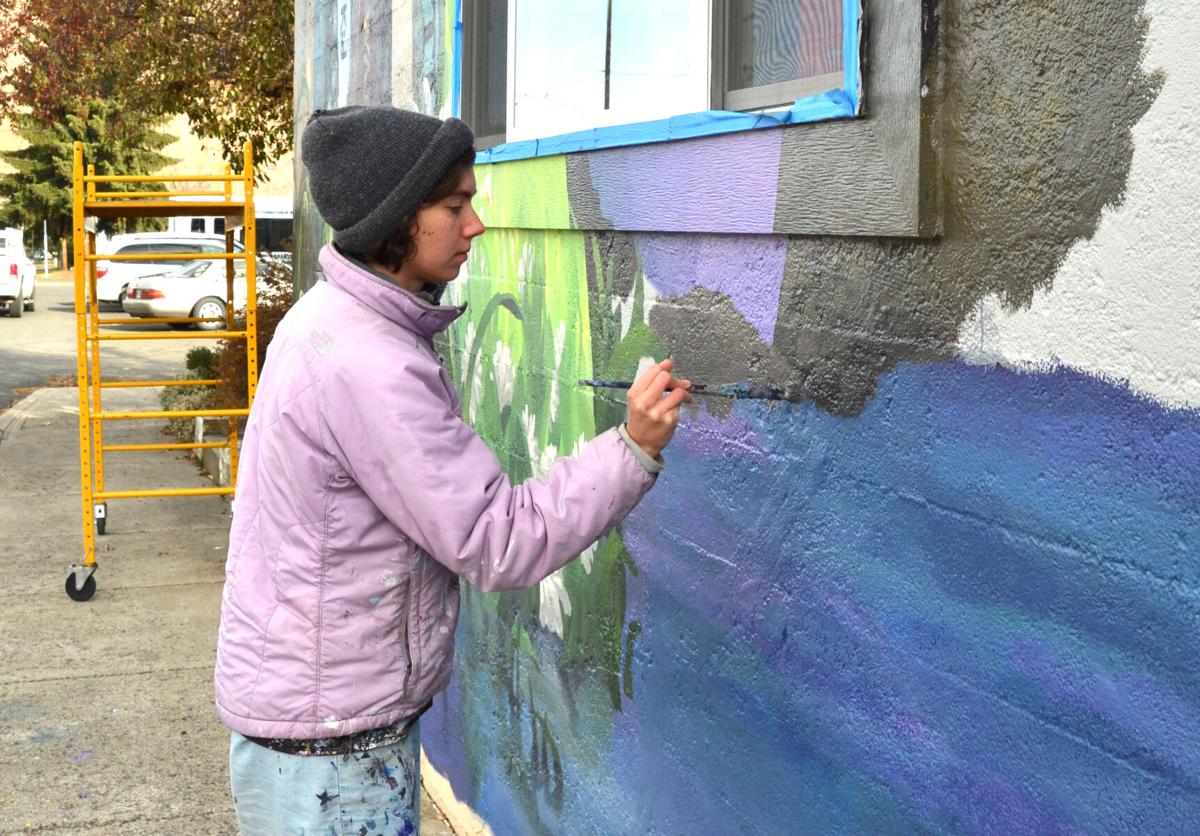 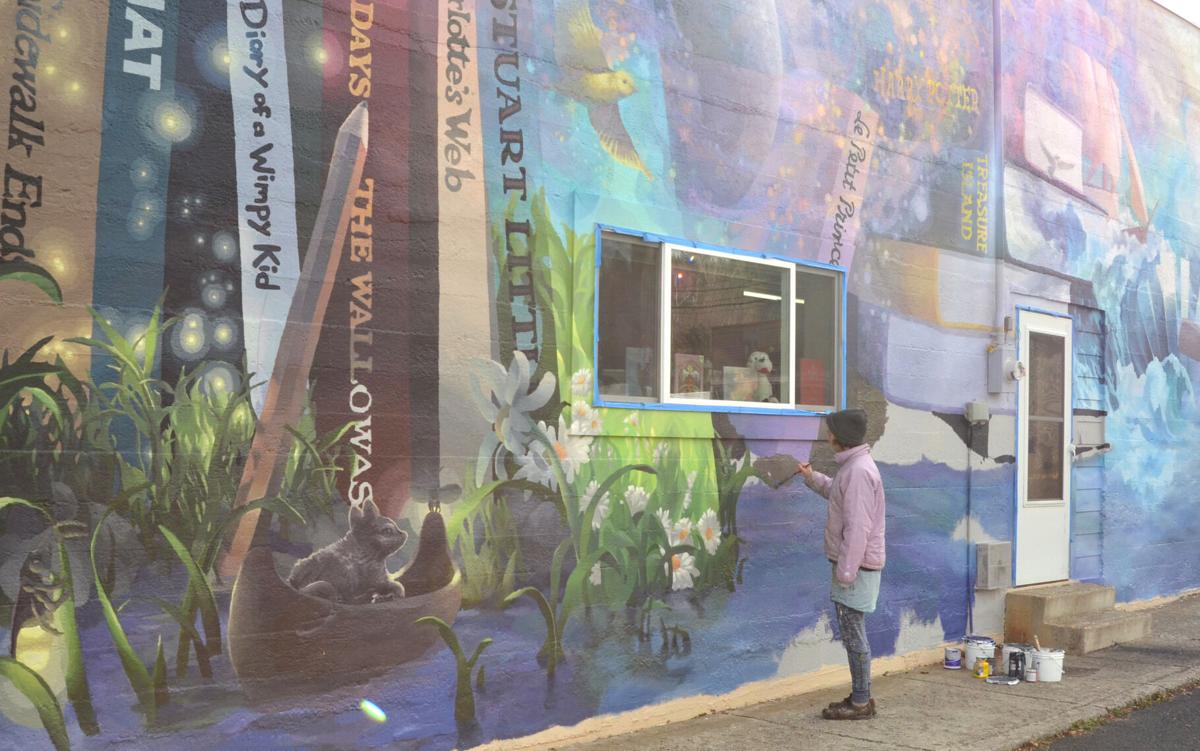 WALLOWA — Local muralist Anna Vogel was putting the finishing touches on a new $7,000-plus mural adorning the west-facing wall of the Wallowa Public Library on Friday, Oct. 30, that has been underway since June.

Last week’s work is the culmination of years of planning and effort.

Janet Goebel, chairwoman of the Friends of the Wallowa Public Library, said that last year, the library received a grant from the Wildhorse Foundation to complete the long-desired work.

“This has been a dream for several years,” Goebel said. “It’s exciting this has happened so well.”

Vogel, of Enterprise, said that last year, Friends member Mary Hawkins connected her with the library board and urged her to submit a bid. She did and it was accepted. Hawkins wrote the grant application.

Goebel said the bid covered the cost of supplies and Vogel’s labor to do the mural, as well as another $1,500 bid for refurbishing and maintenance over the next 15 years.

Vogel said she also plans to do a new sign for the front of the library.

The building, at the corner of Pine Street and Highway 82, was donated to the city by Georgia Wilson in 1991. According to a press release, it has long been a goal to repaint the building and add a mural.

The painting cost more than $12,000, Goebel said Friday. It originally included a mural by the recently deceased artist Gene Hayes that had been a local icon since 1994. The mural was restored in 2007, but with the building in need of a new paint job, the mural couldn’t be restored and Hayes was in his 90s and no longer felt up to climbing ladders and scaffolding to do the job.

First, repairs to the building were done by Dan Scott’s Wallowa Mountain Contracting, of Lostine. Then came the overall paint job by Fred and Cathy Schoellig’s Schoellig Painting, of Elgin in 2019.

Then they started thinking about the mural. A Friends committee offered ideas on what it should include. Friends member David Weaver suggested the spines of books on a shelf, to which fellow members agreed, according to the release. Vogel took that theme and ran with it, as well as giving a nod to the Nez Perce Tribe’s connection to the area with a depiction of “Kaya the River Girl” included.

The weather and the COVID-19 pandemic delayed the mural from its original deadline of June, which was extended to August and then to the end of October, Goebel said.

“The mural is more than a picture,” the release stated. “It tells a story.”