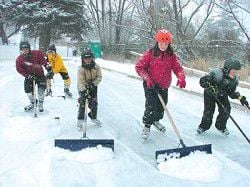 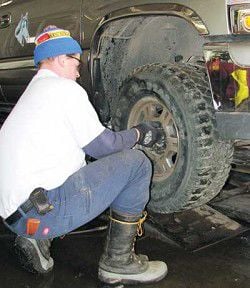 While piling snow and frigid temperatures created chaos throughout Oregon, Wallowa County residents took the series of powerful winter storms in stride the past week, enjoying the opening of the ice rink, buying sleds to slide down hills and getting ready for a white Christmas.

Not surprisingly, the first wintery weather of the year during the past week-and-a-half - which included subzero temperatures - has given local plumbers some extra business.

"We've had frozen pipes all over the county," said Kannon Miller of Miller Plumbing in Enterprise, who said all three of its plumbers have been sidetracked from regular work to deal with the cold weather problems. She estimated that there have been 30 frozen pipe calls since winter really set in, but added, "that's not as many as expected."

To avoid frozen pipes when the temperatures dip really low, one recommendation is to keep a faucet running in the house. The city of Joseph, which doesn't monitor water use during the winter, has a sign pasted to the door of city hall giving this advice for residents who have had frozen pipe problems in the past. "Just let us know, and we'll give some credit on water bills in the spring," said city recorder Noma McDaniel.

Preparations for the snow travel began early in Wallowa Valley, according to Enterprise Les Schwab manager Mike Falk. "People in this county start putting their snow tires on in November," he reported.

There is always a rush after the first snow, Falk said, and the week of Dec. 7-13 he estimated the tire store sold 100 new snow tires in addition to switching out summer tires for last year's winter tires innumerable times.

The biggest concern Falk had was that closures on I-84 would keep supply trucks from brining tires into Enterprise.

Wallowa Valley residents apparently prepare far in advance for winter heating. Wood dealers reported they were busy throughout the summer, with Community Smallwoods Solutions reporting that people were bringing in dumptrucks to load full of wood.

Wallowa Wood dealer Ed Sparks said that although he was really busy, lower oil prices had taken some of the pressure off folks trying to decide between oil and wood heat.

"When fuel oil was up I was selling wood all summer," he said. "The orders never slowed down until recently. But, business is slower than last year. Wood was the cheapest heating source when oil prices were high, but now, with the price down, the two fuels are comparable."

Now, it appears, many Wallowa County residents are prepared for winter heating - in some cases having both oil or propane heaters and a wood stove.

Wood, Sparks said, was by far the best choice for keeping the house warm - not to mention heating and cooking if the power failed.

"At a cord a month we keep our house warm, a nice 70 degrees, clear into the back bedrooms," he said. "We were working to keep the bedrooms at 60 degrees on 55 gals of oil a month before we got this wood stove."

Some people are happy to see the arrival of winter, including winter sports enthusiasts. The community ice rink at the Enterprise City Park opened last week, and Ferguson Ski Ridge opened for the season Sunday. Fergi, which has a new Web site at www.skifergi.com is scheduled to remain open all the way through the holiday school break until Jan. 4 (closed Christmas Day).

Sharon and Larry Nall of rural Joseph dusted off their cross-country skies and skied up to the wilderness trailhead on Hurricane Creek Road last week. However, Sharon said the snow isn't quite deep enough for good back country skiing yet.

The storms, meanwhile, forced the closure of Interstate 84 between Portland and Hood River on Saturday, forced Alaska Airlines to cancel more than 50 flights in Oregon and Washington, caused numerous traffic accidents on major highways, including several fatals, and closed schools in the Willamette Valley and North Coast.

Pacific Power sent crews from Bend, Klamath Falls, Coos Bay, Medford and Roseburg to the Portland and Salem areas to help with scattered power outages. Most of the 6,600 power outages were in the Dallas, Stayton, Independence and Fall City areas. Some outages lasted more than two days.

Interstate 84 was closed over the weekend and early Monday after ice, snow and strong winds caused numerous accidents.

ODOT also had problems keeping I-84 open between La Grande and Pendleton at Cabbage Hill. The highway was closed multiple times in the past week.

A big rig took out an OSP patrol vehicle Wednesday, Dec. 17. Trooper Trampas Mcfrae was at the scene of a jack-knifed truck westbound on I-84 at the bottom of Cabbage Hill when another out-of-control truck driven by Sabino Luna, 44, of West Valley, Utah, crashed into the guardrail and then crashed into the parked OSP Ford Expedition. No one was injured. The freeway was closed for two hours.

An Eagle, Idaho, man died Saturday morning, Dec. 20, when his pickup left I-84 10 miles east of La Grande and crashed into an unoccupied tow truck that responded to an earlier accident. John A. Sears, 44, died at the scene, OSP troopers said.

Can you persuade people to get a vaccine with marketing? The Casper health department is taking a jab at it.