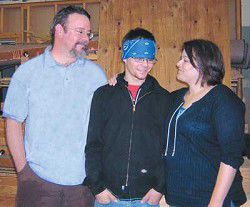 <I>Patty Mantia/Chieftain</I><BR>Archie and Beckey Buck shower smiles on their son, Isaiah, who is recovering from injuries after an accident off Dug Bar Road that killed popular youth leader Jeff Gaertner. Isaiah was in a coma after the accident and has made remarkable and steady progress. 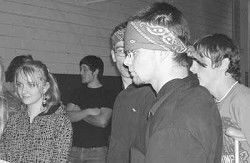 <I>Patty Mantia/Chieftain</I><BR>Archie and Beckey Buck shower smiles on their son, Isaiah, who is recovering from injuries after an accident off Dug Bar Road that killed popular youth leader Jeff Gaertner. Isaiah was in a coma after the accident and has made remarkable and steady progress.

Isaiah Buck, 17, stood shyly among his friends Saturday at a welcome home party in Lostine.

That he is alive is no small matter.

A neurosurgeon predicted he likely would not wake up from a coma that lasted about two weeks after a March 31 vehicle accident off Dug Bar Road. The accident in rugged terrain killed youth group leader Jeff Gaertner and injured six boys.

"It's crazy. I think it's crazy that I'm alive. It's a miracle. Give glory to God," Isaiah said.

He received many hugs and good wishes Saturday at the gathering at Providence Academy, where he is a student. A young, admiring child even handed him a chocolate Hershey bar, which he quickly pocketed.

Isaiah wants to chop wood. He wants to get his driver's license. He is frustrated that he missed a trimester of school, and he will have to catch up with his studies.

These are modest aspirations for a former wrestler, but more daunting now to a boy who suffered collapsed lungs, severe brain trauma and needed a ventilator for awhile to live-- a boy who wiggled his fingers slightly while comatose and gave his parents hope he would pull through the ordeal.

Now, he faces challenges relating to fatigue, stamina, vision and memory. However, daily he progresses.

"I don't remember the accident," Isaiah said, nor the camping trip along the Snake River the group had just completed. His long-term memory is more intact.

The brain is a mysterious and complex organ, and Isaiah's doctors and physical/occupational therapists are amazed at his progress, his parents Archie and Beckey Buck said.

"His neurosurgeon told us that, most likely, him waking up wasn't going to happen...that he wasn't going to wake up because of the type of trauma, the head injury he suffered," Beckey Buck said.

"We just kept praying and the Lord saw it differently," she added.

Archie Buck recalls, "The original prognosis was he would be in a vegetative state the rest of his life." Isaiah suffered a "diffuse axonal brain injury," one of the most devastating of brain traumas.

Entries in the CaringBridge website journal detail his struggle to live.

April 1: Isaiah is unconscious. "The doctors feel that he is strong and he is fighting."

April 3: "Isaiah has shown some very positive movement. He tried to open his eyes and move his mouth and some movement in his arms."

April 4: Troubling news from the neurosurgeon about the MRI...suffering from 'diffuse brain shake"...We need to continue to pray for Isaiah."

April 7: "Isaiah's condition has deteriorated a bit." However, later that evening, "The nurses confirmed some positive eye movements."

April 13: Isaiah was rubbing his eye and acting as if he was trying to wake up. Later, "He has opened his eyes and kept them open...Beckey asked him to give her a thumbs up if he understood her. He gave her a thumbs up. "

Again, the same day, the entry reads, "Brian, his brother, came in...Isaiah heard his voice and looked at him...Isaiah then reached out his hand to Brian."

In the two month since that time, Isaiah improved steadily.

Isaiah's attitude and spirit are terrific, his father said. He will receive physical, occupational and speech therapy in La Grande three times a week throughout the summer.

Through a tragic accident, the boy's struggle to live brought a community together. Lostine residents and others prayed for him. They raised money for his medical bills at a dessert auction hosted by the Lostine Tavern.

"The community of Lostine has shown its generosity. At the bake sale, we earned $10,000. We were selling pies for an average of $300 a piece. It was amazing...They should be commended for rallying together," said Terry Tollefson, pastor at Christ Covenant Church in Lostine and a friend of the Buck family.

Local musicians are planning another money-raising event Aug. 8 in Joseph City Park for the families whose children were injured in the March 31 accident.

Daily, well-wisher are following Isaiah's progress on his CaringBridge website which has had more than 10,000 hits at (http://www.caringbridge.org/visit/isaiahbuck).

Isaiah was the only young person critically injured in the accident, which occurred on a muddy shortcut road, following the camping trip. Gaertner, of Wyoming and formerly of Wallowa County, was driving.

An airlift team took Isaiah to a hospital in Lewiston, and then he later transferred to another facility.

After spending some time in a Boise, Idaho, rehabilitation center, he finally returned to Lostine last week. He said he ordered a steak before beginning the ride home.

While weather forced the family to cancel a full barbecue Saturday to celebrate Isaiah's homecoming, many well-wishers came to Providence Academy, nevertheless, to wish him well.

They ignored a lengthy thunderstorm, complete with lightning and a torrential downpour that hit the area.

Isaiah, wearing a blue bandana across his forehead, stood among his friends in the academy quietly talking, or simply being quiet.

He wants to thank all who prayed and offered their support.

"It's great. People have really been helping and asking me how I am," Isaiah said.

His father noted, "The community support has been outstanding and hard to comprehend, so much love being poured out for our family and Isaiah."

The teenager said he is doing one thing differently than he did before the accident.

"I'm reading my Bible every day," he said.