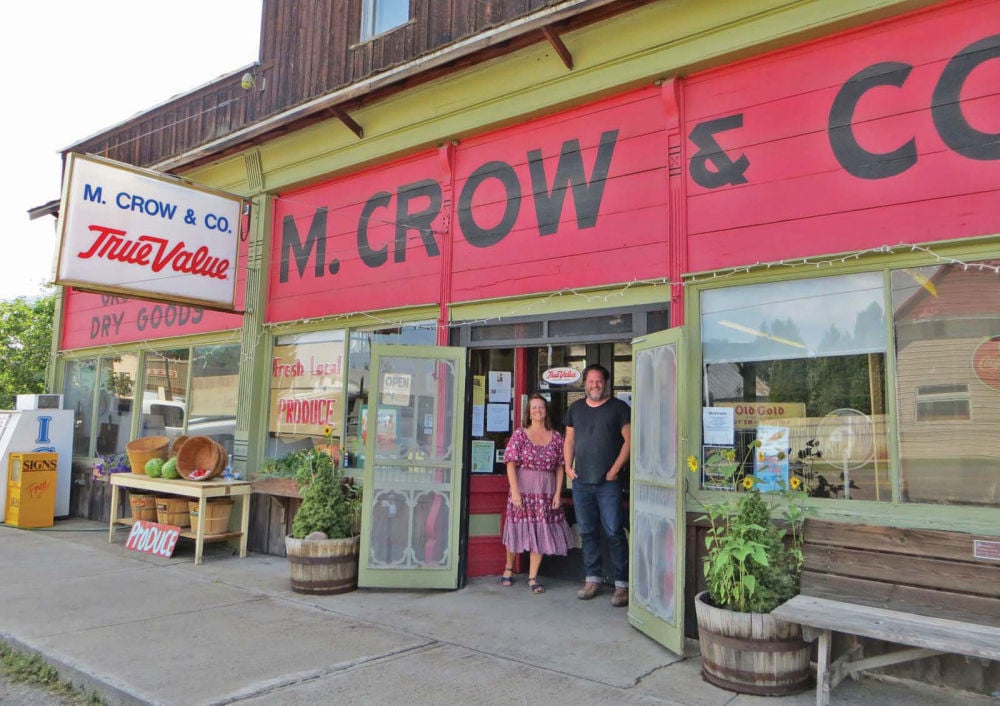 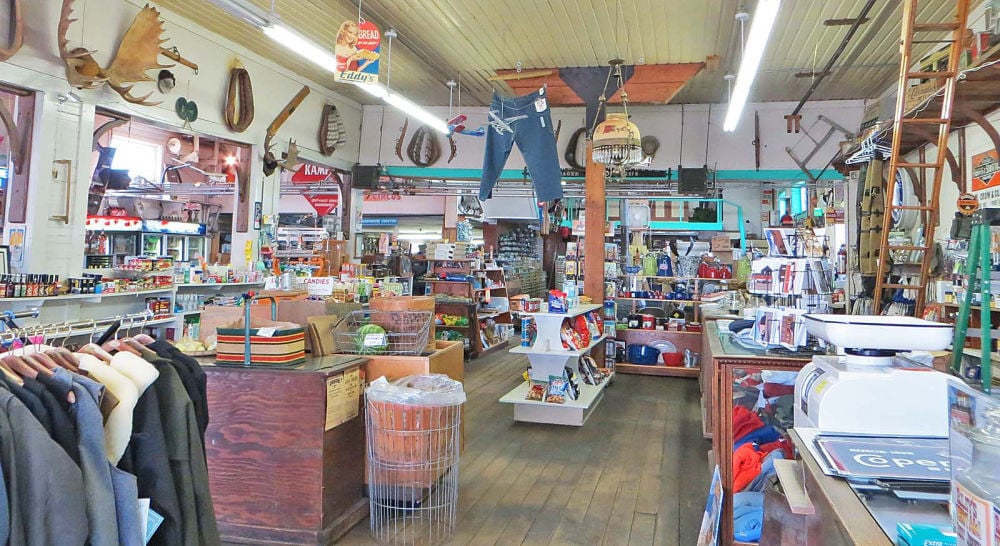 <p>Despite the ownership change, M. Crow and Co. will retain its name and identity as an old-fashioned mercantile business that sells everything from groceries to hardware. The woodburning stove near the back of the store will remain a gathering place.</p> 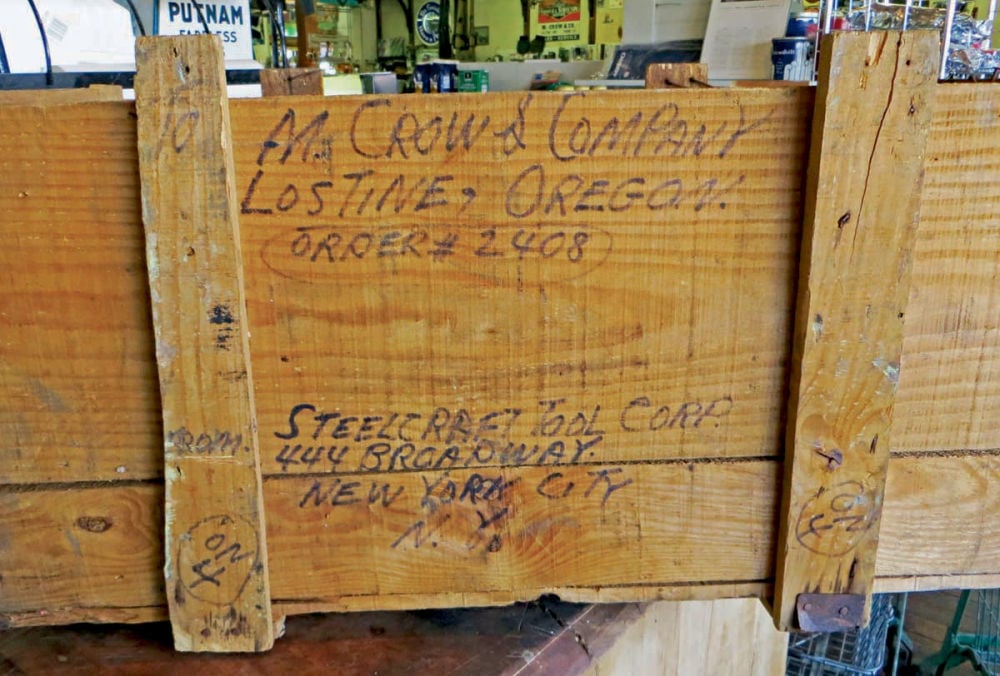 <p>This old shipping box to M. Crow & Co. has a return address that is only one number off from the apartment building where Tyler Hays lives when he is in New York.</p>

<p>Despite the ownership change, M. Crow and Co. will retain its name and identity as an old-fashioned mercantile business that sells everything from groceries to hardware. The woodburning stove near the back of the store will remain a gathering place.</p>

<p>This old shipping box to M. Crow & Co. has a return address that is only one number off from the apartment building where Tyler Hays lives when he is in New York.</p>

LOSTINE  The historic M. Crow and Company mercantile store, Wallowa Countys oldest retail business  which celebrated its 100th birthday in 2007  will live on into the future.

After 106 years under the ownership and management of the Crow family, Lostines store has been purchased by Wallowa County native Tyler Hays, who wants to preserve the heritage M. Crow and Co. represents.

My great-grandparents shopped at that store, said Hays, who promised that the business will retain its historic name and character.

Jane Harshman, a childhood friend of Hays and former owner of Ruby Peak health food store in Enterprise, is now M. Crows manager, after training with Doug Crow in the store for two months.

Im excited, she said of her new position, saying shes learned a lot about Lostine during her internship, including how much the community loves and supports the business. Its always busy. The residents here really use it, she said, adding the challenge will be to attract new customers.

M. Crow not only sells groceries, hardware, clothing, sporting goods and a lot more, it serves as the social hub and soul of the small but tight-knit Lostine community.

M. Crow came close to closing down after the Crow family  including Doug and Melanie Crow and Keith and Jan Bird, who were running the store  decided for a variety of reasons that it was time to let go of the business. They put it on the market in May of 2010. We had a goal of keeping it going for 100 years and we did that, Doug Crow said. The hope was that another family would want to buy and operate it.

A few months later in 2010, the Crow family was facing the possibility of selling off the merchandise and closing the business when no viable purchaser had stepped forward. However, usually strong summer sales, coupled with an outpouring of community support that made them realize how much they were appreciated, made the family decide to keep the store running with renewed hopes of landing a buyer.

Enter Tyler Hays, who was keeping track of the M. Crow store challenge from afar. He spends summers at Wallowa Lake where his parents, Ted and Sharon Hays live. Tyler Hays resides most of the year in New York City, where he designs and makes furniture in his BDDW business.

When I heard Crows was going to close, I was praying that someone would buy it and keep it going, Hays said. Finally, I felt compelled to step forward.

Hays said he feels the Crow family are the real heroes to keep the business running as long as they did. Now Im honored to become part of that heritage.

Hays said that people in Wallowa County already know that it is one of the most amazing places on earth and he hopes to move back permanently in the future.

While the ownership change has been pending for a number of months, it became official around the end of the June. Doug Crow spent his last day behind the counter on Saturday, Aug. 3, ending his familys long and tight tie to M. Crow and Co.

It was never closed, said Harshman of the smooth transition.

A new family is now involved with the store, with Hays brother Brett and mother Sharon both helping staff the store, along with Lostine residents Debbie Yarborough and Dodi Yaccarino.

Hays notes that people are mostly concerned with what he plans to do with the store. We want to keep it as it is, and add a few things, he said.

For example, the new owner has already added a small stock of quality outdoor clothing and will offer some small items from his Lostine design business, which includes cutting boards already on display. Harshman said a Produce Friday featuring fresh local and regional produce has already been initiated.

The store will be holding a big yard sale of old merchandise  such as old-fashioned galoshes  duplicate signs and other things during store hours Saturday, Aug. 17, and everyone is invited to stop by. Hours for M. Crow are the same as in the past, 8 a.m. to 6 p.m. Monday through Friday, 9 to 5 Saturday and closed on Sunday.

One huge coincidence  some people might even consider it an omen  occurred recently when Hays mother unearthed an old wooden shipping box while helping clean out the store room. It was addressed to M. Crow & Company, Lostine, Oregon, from Steelcraft Tool Corp., New York City, N.Y. The tool companys street address was 444 Broadway, and it just so happens that Tyler Hays lives in an apartment building at 442 Broadway.

His father, Ted, put a picture of the box on his Facebook page, describing the find as kind of a woo woo moment for the old store and Tyler.