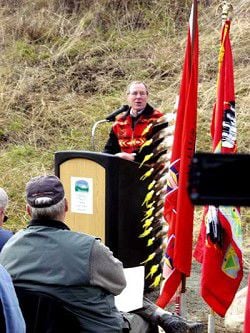 Wearing an Indian-motif vest, Gov. Ted Kulongoski tells Joseph crowd that Iwetemlaykin is his new state park for 2009. Under his administration, Oregon has opened a new park or heritage area annually since 2004.?Before that, the state hadn't established a state park for 32 years. 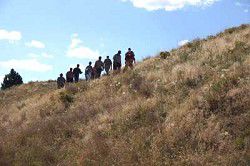 Wearing an Indian-motif vest, Gov. Ted Kulongoski tells Joseph crowd that Iwetemlaykin is his new state park for 2009. Under his administration, Oregon has opened a new park or heritage area annually since 2004.?Before that, the state hadn't established a state park for 32 years.

The spirits of the ancestors of today's Nez Perce were invoked as tribal leaders and local and state officials dedicated Oregon's newest state park, the Iwetemlaykin State Heritage Site in Joseph.

Several hundred, including numerous Nez Perce, observed the ceremonies on a brisk Saturday morning, Oct. 10, and many were visibly moved. The dedication represented the culmination of a years-long struggle to save the Nez Perce sacred site from threatened development.

Several speakers mentioned the Nez Perce who are buried on the land in unmarked graves. Their presence was a major reason regional tribes, the state and the Oregon State Parks Trust worked to purchase the 61 acres on Highway 82, formerly the Marr Ranch.

"We are here to honor this piece of land," said Brooklyn Baptiste, vice chairman of the Nez Perce. "The Nez Perce are still tied to the land. The land will always be more important than us, and we have to take care of it."

The name, translated as "at the edge of the lake," symbolizes the 62-acre park's location on Wallowa Lake, adjoining the burial site of Old Chief Joseph, who is revered by the Nez Perce.

Antone Minthorn, chairman of the trustees of the Umatilla Indian Reservation, recalled that concerned local residents contacted him because of the development plans, and Nez Perce attended public hearings.

Armand Minthorn, a religious leader of the Umatilla tribes, led a native welcome song and a tribal blessing in Nez Perce and English.

"We are making history today," he said, "and you are part of it."