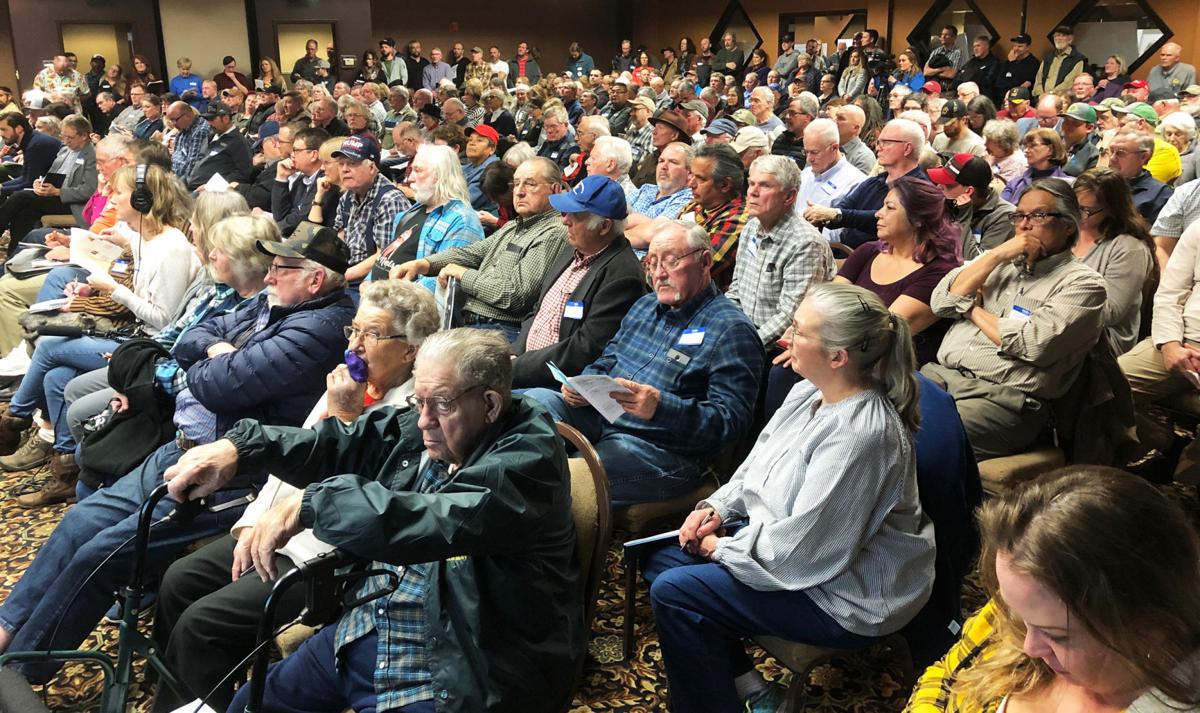 More than 300 people of all ages, occupations, and concerns attended a presentation of the Governor’s Stakeholder report on the four Lower Snake River Dams in Clarkston, Wash. Jan. 8.

A panel of women and men representing stakeholders groups discussed the question of “How do we move forward to resolve the issues surrounding the four Lower Snake River dams?” at a meeting in Clarkston, Wash. on Jan. 8.

More than 300 people of all ages, occupations, and concerns attended a presentation of the Governor’s Stakeholder report on the four Lower Snake River Dams in Clarkston, Wash. Jan. 8.

A panel of women and men representing stakeholders groups discussed the question of “How do we move forward to resolve the issues surrounding the four Lower Snake River dams?” at a meeting in Clarkston, Wash. on Jan. 8.

On Jan. 8 a crowd of more than 300 people attended a presentation on the State of Washington’s new report on the Lower Snake River dams. The two-hour event in Clarkston, Wash. included a summary of the report followed by a panel discussion of what actions might come next. The eight panelists represented the variety of regional interests, including Nez Perce Tribal Fisheries, coastal fishermen, agriculture, barging and transportation, and energy.

The 107-page report, Lower Snake River Dams Stakeholder Engagement Report, summarizes the positions of both dam opponents and dam advocates. Topics include salmon recovery, relevance to orcas in the Salish Sea, importance of the dams to agriculture, transportation options, and economic effects on regional communities.

At the Clarkston meeting, moderator Jim Kramer summarized the report and then sorted through a thick pile of papers bearing questions from the audience for the eight panelists. He condensed the multitude of questions into, essentially, “What must we do to move forward?”

Panelist’s consensus: there had to be more direct discussions by all interests.

Some panelists proposed more specific solutions, or pointed out unresolved problems. Sam Mace of the Save Our Wild Salmon Coalition said, “We need one-on-one informal conversations. We need to get to know one-another. Solutions can’t just happen in a vacuum. We need politicians and elected leaders to help make those conversations happen.” She specifically praised Idaho Sen. Mike Simpson and Washington Gov. Jay Inslee for their efforts to start meaningful discussions.

River outfitter Dustin Aherin, who has guided on the Salmon, Snake, and Owyhee Rivers for more than 25 years, noted that in 1962 there were 23,000 Chinook salmon redds in the Middle Fork, Salmon River. In 2019 there were only 161. “We need to start working on infrastructure improvements,” he said. “That should include updated rail and highways. We haven’t spent any money on infrastructure, to improve these, since the dams were built.” Such improvements, he noted, would benefit timber and all other industries, and keep young people here.

Panelist David Johnson, manager of the Nez Perce Fisheries Program, said “Although my department put hundreds of thousands of young salmon into the river, our ability to have any positive effect on the numbers of fish returning is very limited.” Johnson also noted that tribal treaty rights to harvest fish in perpetuity had not been upheld.

“Salmon recovery is the most important thing,” David Konz of Tidewater Transportation and Terminals said. “We need to start with that. If your concerns just start with the (Lower) Snake River dams, we’ll just spin our wheels and stay were we are.” Konz also said that looking at what kinds of projects would provide the “best benefit for money spent” would be a good idea.

Alex McGregor, representing his company and the Washington Business Rural Economic Vitality Task Force, emphasized the need to follow “sound science” and that agriculture is Washington’s #1 industry, “It is the only industry in Washington to be dominated by families,” he said. He noted that existing maritime rail lines are already fully engaged, and that beaching the dams with its consequent loss of barging might take 90,000 acres out of production.

The Jan. 7 Clarkston meeting that summarized stakeholder positions on the Lower Snake River dams was followed by similar panels in Tri Cities on Jan. 9 and Vancouver, Wash. Jan. 11. Comments including opinions about the Lower Snake River dams may be submitted to the Washington Gov. office until Jan. 24. The report and comment form are found at isrdstakeholderprocess.org

The forum in Clarkston followed closely on the heels of another economic study released in late December by the Pacific Northwest Waterways Assoc. The study, National Transportation Impacts & Regional Economic Impacts Caused by Breaching Lower Snake River Dams, was conducted by the FCS Group consultants, and relied upon interviews with farmers, river transportation companies, shippers and agricultural trade groups. It used existing data from prior BPA and other studies.

That study concluded that costs of impacts to transportation would be more than $2.3 billion, and that $1.6 billion worth of new infrastructure would be required to meet transportation needs. Interviewees for this report also commented that the upcoming EIS report assumes that the “existing” rail and grain elevator networks includes short line tracks that have been abandoned, and grain elevators no longer in use. Other costs this study summarizes include an additional $1.2 to $2.0 billion to keep freight moving efficiently and safely in the Pacific Northwest, an additional transportation cost of $0.20/bushel for grain, more than $7 million/year in economic and social costs of increased emissions, and $5.9 million for injuries and fatalities. This report may be found at: https://www.pnwa.net/wp-content/uploads/LSR-Dam-Breach-Impact-Report-FCS-v3.pdf