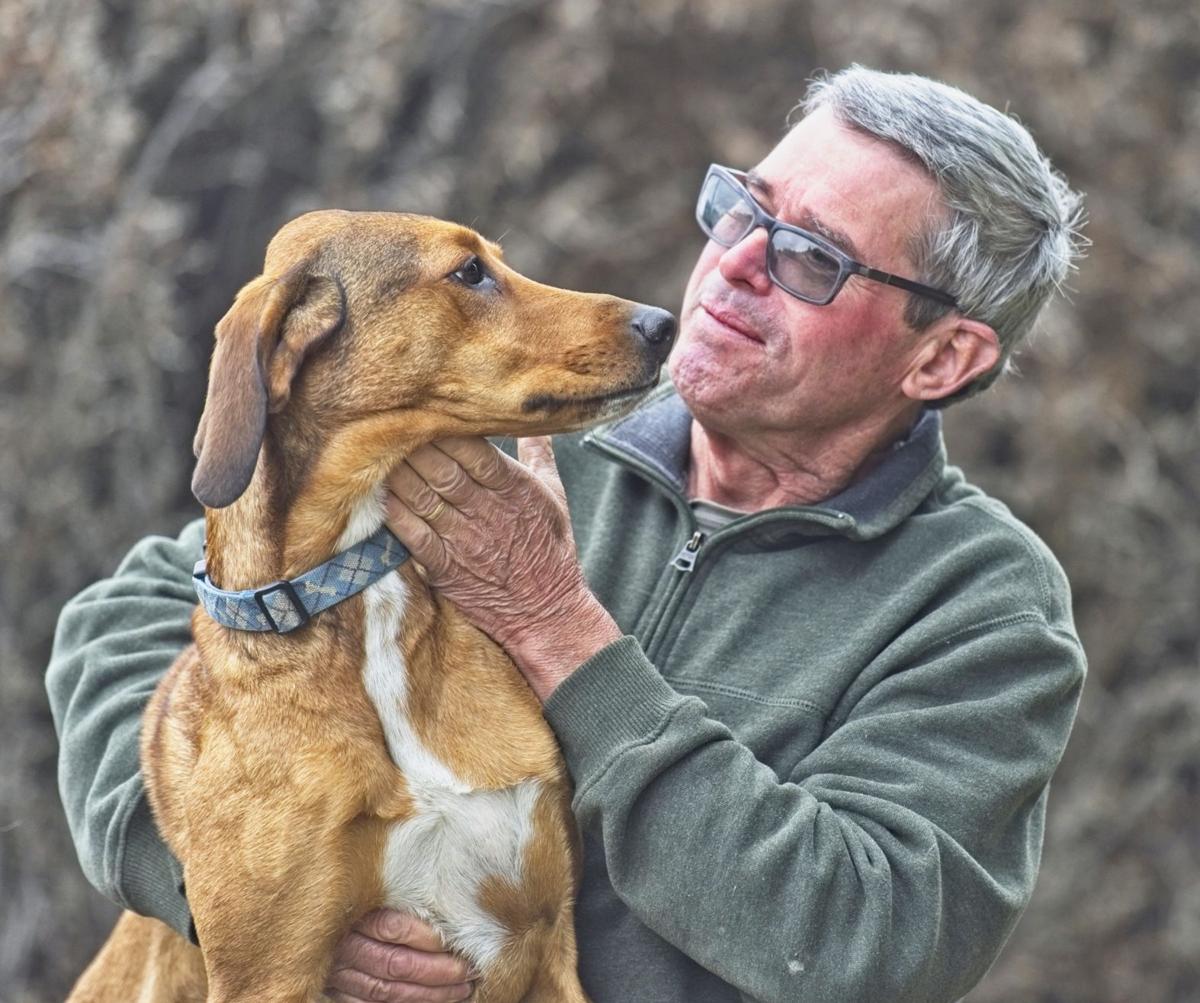 Photographer and wildlife biologist John Marshall and his dog Obie. Marshall has become known for his documentation of fire-prone landscapes, fires, the aftermath of fires. He (and Obie) has focused on rephotographing the Osborne panoramas for several years. 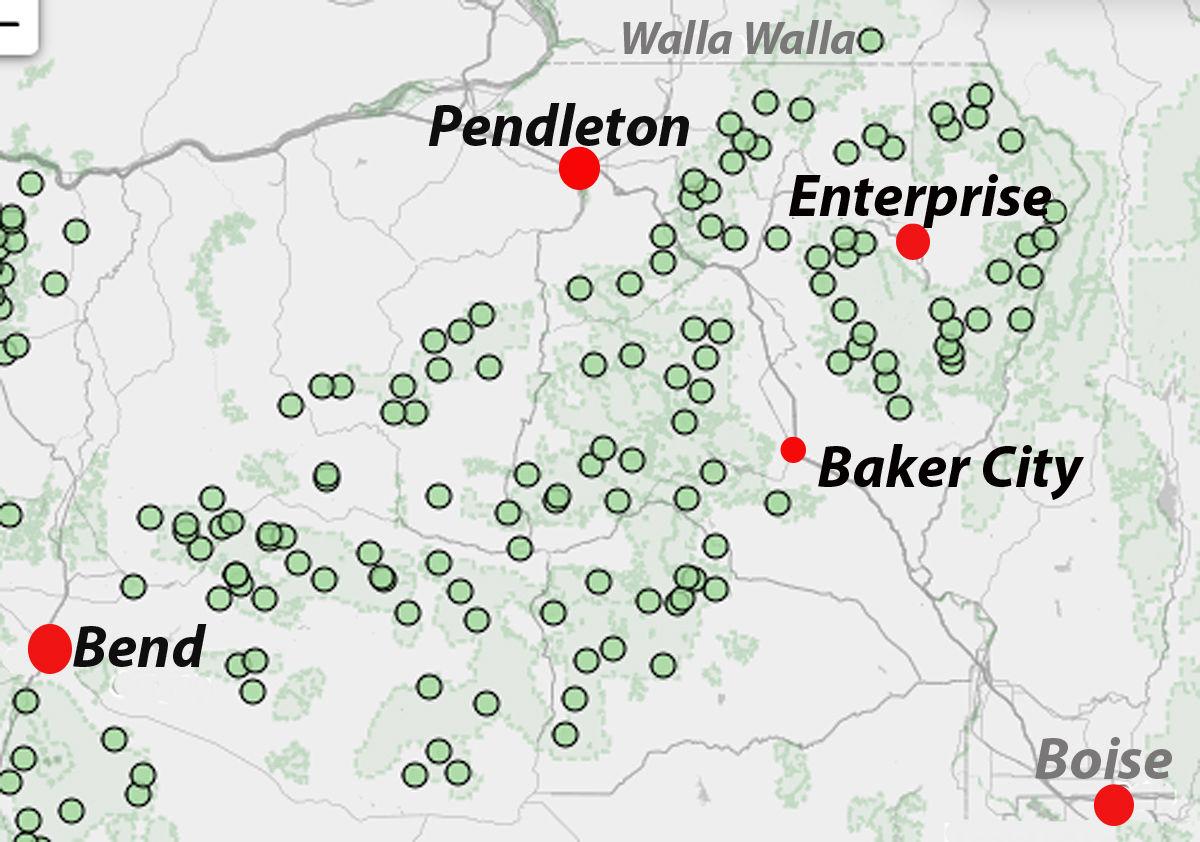 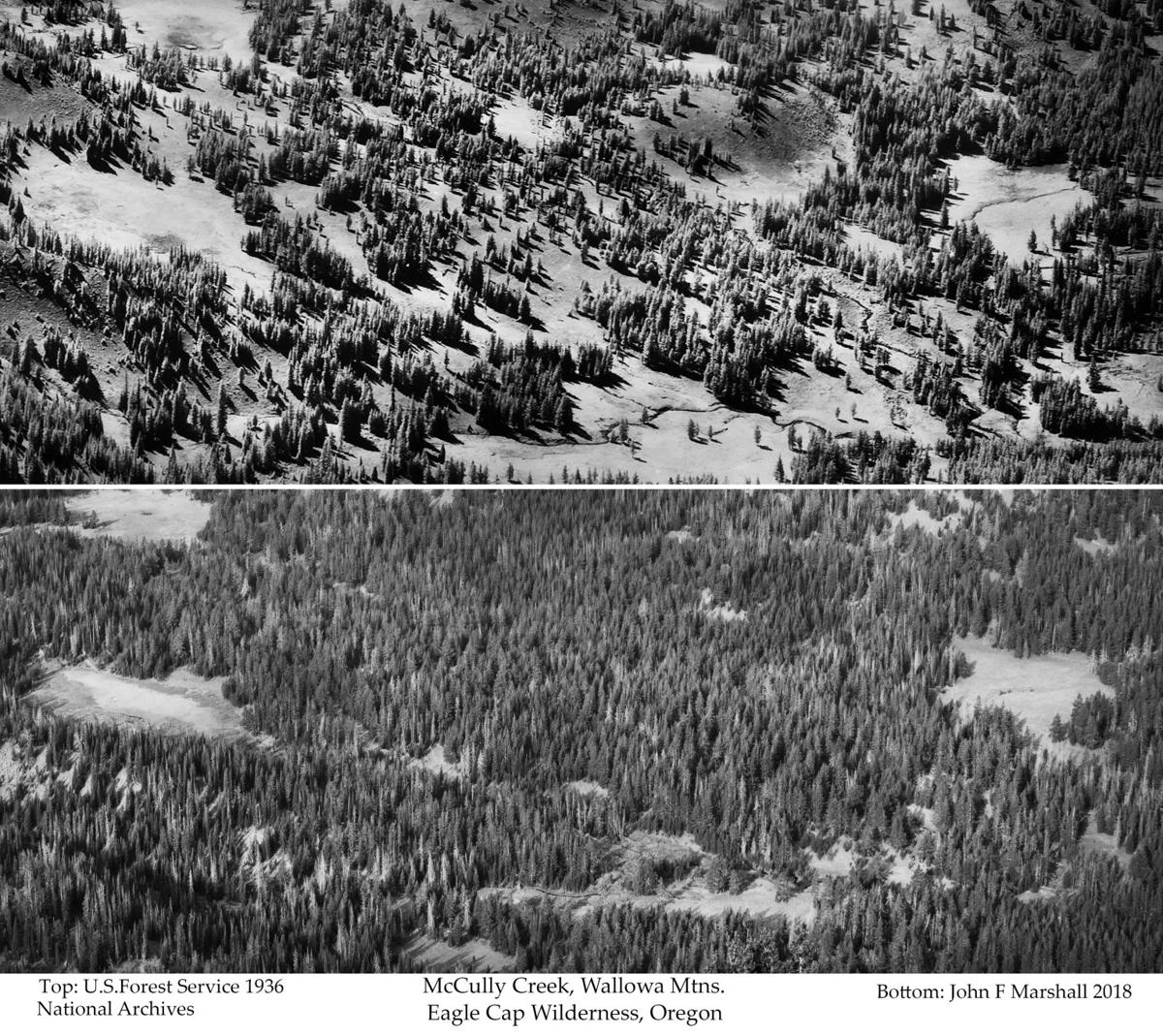 Historic Photo Comparison showing McCully Basin in the Eagle Cap Wilderness of the Wallowa Mountains. The historic image is cropped from the Red Mtn Osborne Panorama from 1936, obtained at the National Archives and Records Administration, Seattle, Wash. The 2018 photo is also cropped from a larger image. 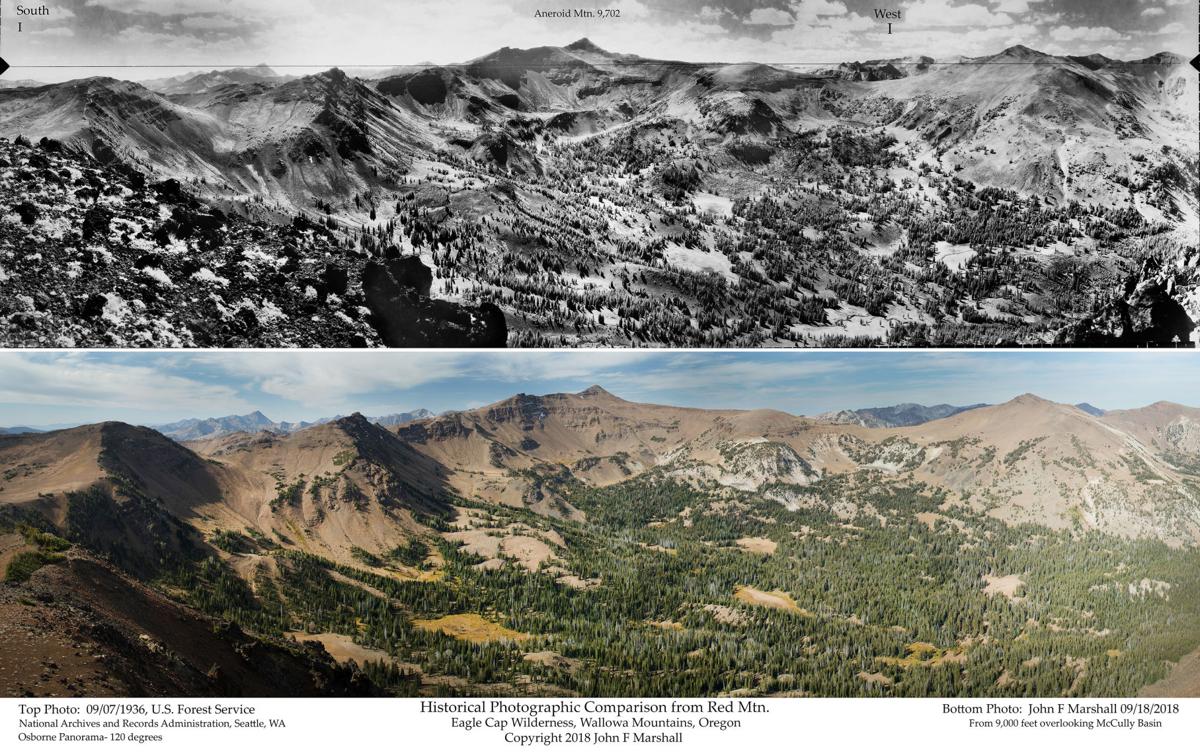 McCully Basin from what was called the Red Mountain Lookout site. Top: Osborne photograph, which shows open meadows and steam courses on Sept. 7, 1936. Bottom: John Marshal's re-take of the same image in 2018 with a much denser forest and smaller to vanished meadow on Sept. 18, 2018.

Photographer and wildlife biologist John Marshall and his dog Obie. Marshall has become known for his documentation of fire-prone landscapes, fires, the aftermath of fires. He (and Obie) has focused on rephotographing the Osborne panoramas for several years.

Historic Photo Comparison showing McCully Basin in the Eagle Cap Wilderness of the Wallowa Mountains. The historic image is cropped from the Red Mtn Osborne Panorama from 1936, obtained at the National Archives and Records Administration, Seattle, Wash. The 2018 photo is also cropped from a larger image.

McCully Basin from what was called the Red Mountain Lookout site. Top: Osborne photograph, which shows open meadows and steam courses on Sept. 7, 1936. Bottom: John Marshal's re-take of the same image in 2018 with a much denser forest and smaller to vanished meadow on Sept. 18, 2018.

Today’s forests aren’t what they used to be. A century of fire exclusion has changed landscape patterns and ecosystems across the Wallowa and Blue Mountains. Now, photographs from 80 years ago have revealed that Wallowa County and eastern Oregon forests were open patchworks of trees, meadows, and shrub-lands. Only about 50% of the forest area was trees. If we restore this past patchwork character, fire size and severity will change, too, according to USFS Research Landscape Ecologist Dr. Paul Hessburg and photographer/biologist John Marshall.

In the 1930’s the U.S. Forest Service used a unique camera to record panoramic views from more than 800 fire lookout sites in the Pacific Northwest. Known as the Osborne Recording Transit, the camera was intended to determine if all of the landscape in an area could be seen from the lookout. The images also allowed the lookout and dispatchers to describe the specific location and features where a fire was located. But the Osborne camera did much more than that. Its high-resolution black and white images also recorded the character of the 1930’s, pre-suppression forests for posterity.

By comparing the Osborne images of past landscapes with images shot today from the same places, photographer John Marshall has documented a dramatic expansion of trees and loss of open spaces in the Wallowa Mountains and elsewhere. This change, said Marshall, who is also a wildlife biologist, is largely due to the exclusion of fire. “It has upended the ecology of eastern Oregon,” he said.

Marshall’s work includes re-photographing the views from existing and defunct lookouts. A few, Harl Butte, Hat Point, and Buckhorn, for example, are still in place. But many, including Cold Spring, Fairchild, and Red Hill, were abandoned and have either collapsed or were dismantled. Others, like Granny Point and Grassy Knoll, never had a permanent structure and were relatively informal lookout sites. Some, like Red Mountain, just east of McCully Basin, were never used as lookouts, but still had critical Osborne images shot there.

Of all the locations he has photographed, two in the Wallowas stand out: McCully Basin and Huckleberry Mountain.

“I came across the Osborne photo of McCully Basin and thought ‘I’ve gotta retake this picture’,” Marshall said. The 1935 image showed an open array of meadows and streams dotted with bunches of trees. “It was an amazing landscape,” he said. “McCully Basin today is much more closed in. The meadows are mostly gone.”

“That place has radially changed, too,” Marshall said. “In the Osborne photo there’s a lot of shrub-land and meadows. It’s a patchwork. Today, it’s all knitted up into mature forest. Elk forage is hugely diminished. What it comes down to is that we have tampered with the Eagle Cap Wilderness. We’ve kept fires out for a half-century or more. And in doing that, we’ve made it into something that it wasn’t before.”

Similar changes are evident across eastern Oregon and southeast Washington “In virtually all the comparisons with the landscapes of the 1930’s, today there are fewer meadows, fewer openings, fewer shrub fields and lots more forest cover,” Marshall said. “And the forest cover is denser. We have altered the habitats of this wild place.”

Dr. Paul Hessburg, a Research Landscape Ecologist with the USDA-FS, Pacific Northwest Research Station in Wenatchee, Wash. has collaborated with Marshall for the past 25 years and researched the fire-prone Western landscape for the past 36 years.

With the help of the Osborne images and Marshall’s work, Hessburg determined that prior to the 1930’s nearly half of the Blue Mountains’ and Wallowas’ forested area was similar to McCully Basin in 1930: a patchwork of meadows, shrub-land and other open spaces, even though most of it was forest capable. Fires maintained the relatively open character. Today, Hessburg noted, there are 10 to 100 times more trees than before we began to control fire. Open spaces, as Marshall’s images show, are vanishing.

“The patchwork produced a grassland fuel that cured out early, Hessburg said. “It was perfect for producing fast-moving fires with short flame lengths and low likelihood of crown fires.”

“A lot of people have noticed that wildfires are getting bigger, hotter, and more destructive.” Hessburg said. And according to current research, that’s true.

“We have a warming climate, increased forest density and expanded forested area,” he said. “That’s a hot combo. So we are seeing more very large fires. And when too many high-intensity fires affect the same area over a short period of time, it is difficult for forest trees to recolonize an area. Some of our favorite forests won’t be forests in the future.”

The remedy, Hessburg says, is to restore the fire-adapted patchwork. “We need to put the right kind of fire back into the system again,” he said. That will allow us to restore a patchwork landscape, and reduce the severity of many of our future fires.” The tools to do this include prescribed burning, mechanical thinning, and the use of managed wildfires, Hessburg noted.

“It’s a social problem, more than an ecological one. We have to realize that there is no future without lots of fire and smoke,” he said in a 2017 TED talk. “Until we, the owners of public lands, make it our high priority to do something about the current situation, we’re going to experience continued losses.”

Marshall’s work is supported by the USFS, The Nature Conservancy, and locally by Wallowa Resources. The Osborne photos, Marshall’s retakes and one of the few remaining Osborne Photo Recording Transits will be a featured exhibit at Whitman College, opening on January 21, with a reception on January 31, and at the Josephy Center in the future. You can view Hessburg’s TED talk on the TED global site at: https://www.ted.com/talks/paul_hessburg_why_wildfires_have_gotten_worse_and_what_we_can_do_about_it

In the early 1930’s, forest fires plagued the western landscape. They were big and they were…