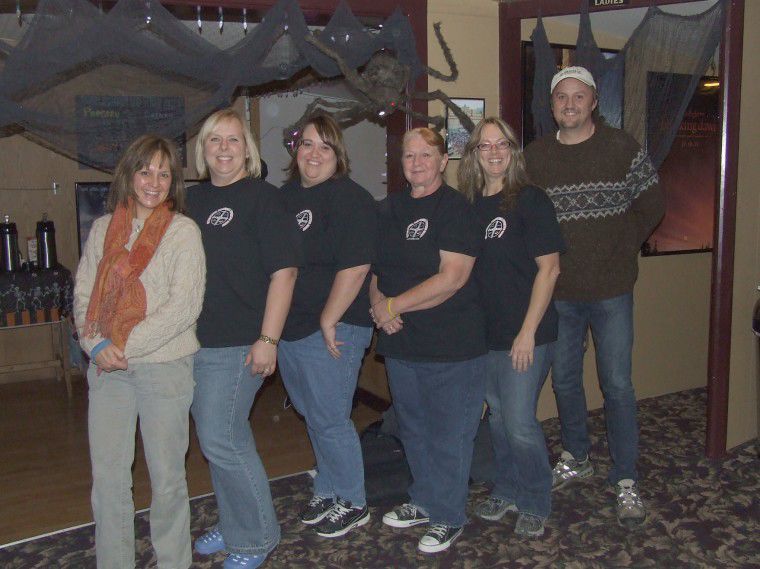 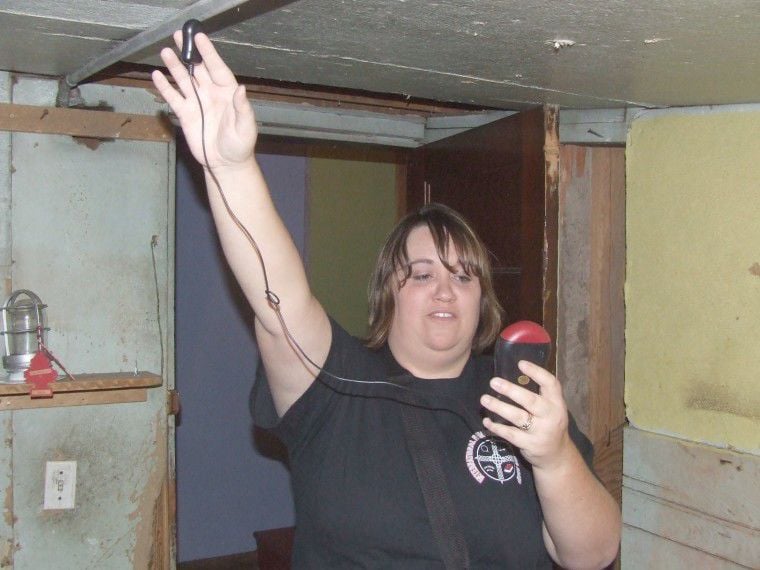 <p>Tracie Kennedy takes an electromagnetic reading with her cell sensor.</p> 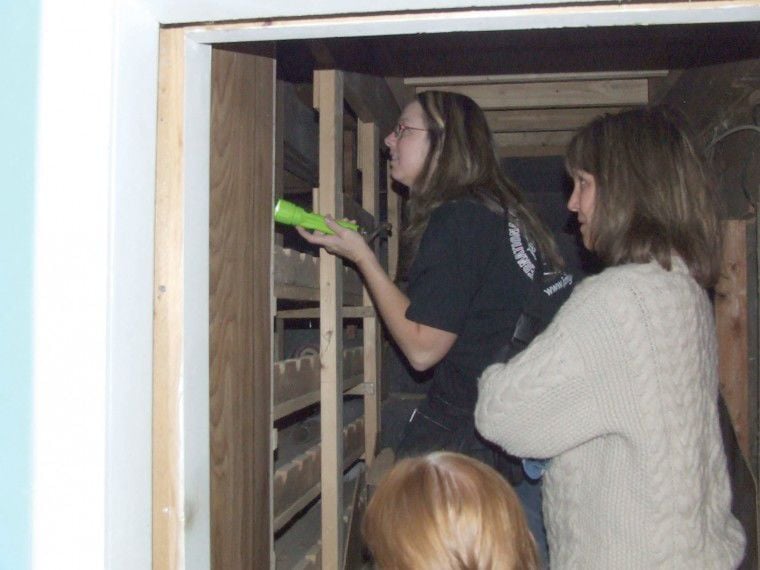 <p>Tracie Kennedy takes an electromagnetic reading with her cell sensor.</p>

ENTERPRISE - Call it an early start to Halloween, if you'd like, but a group of ghost-hunters has been poking around inside every room of the OK Theatre, trying to gather evidence either supporting or helping to debunk any notion that the venue houses supernatural guests.

Just to be clear: Bill and Melisa Bush, current owners of the 93-year-old theater, never sought the services of the International Paranormal Reporting Group. When IPRG's Eastern Oregon team recently emailed the Bushes to propose an investigation, however, the owners were intrigued. The Bushes, who say they have heard and seen things at the theater that they haven't been able to explain, approved the investigation, which carries no cost to the Bushes as clients.

So on Saturday night, Oct. 15, four IPRG investigators - two Boardman residents and two from Arlington - came to Enterprise equipped with digital voice recorders, digital cameras, an electromagnetic sensor and ample patience. After the last of the night's movie-goers had exited the theater around 9:30 p.m., the team - Valerie Robbins, Kathy Covey, Tracie Kennedy and Amie O'Brien - began its field work.

Initial orders of business included having the night's other attendees, five in all, sign liability release forms, and then briefly explaining the evening's simple ground rules and the investigating team's guiding philosophy.

Members say they don't all believe in a world plentiful in ghosts, and skeptical interpretations should prevail until displaced by strong evidence.

"We don't go into an investigation expecting to find a ghost," said Covey, the evening's team leader. She said the objective instead is "to find out why" there may be reports of paranormal phenomena.

In the case of the OK Theatre, such reports have apparently been rather few - according, at least, to several local people who either owned or were employed there in generations past.

"I've never heard those stories, actually," Russell Ford, the theater's owner from 1982 to 2001, told the Chieftain in an Oct. 14 interview. "I'm a bit skeptical of that sort of thing," he added.

Bonnie Stockdale, who worked at the theater intermittently during the approximately three decades it was owned by the parents of her ex-husband, Oyd, beginning in 1933, said she, too, had no knowledge of any unexplainable events at the venue. She said she never liked going into its basement, however. "I just couldn't stay in there by myself," she said, explaining that the basement always gave her "a real odd feeling." Other than that, though, "I really don't recall anything" strange about the theater, she said.

The newspaper also contacted Carolyn Strohm, whose great-grandfather Amel Hackbarth owned the theater sometime before 1933 and who was later employed there. "I didn't know there was ever any ghosts in there," she said. Like others interviewed for this article, though, she wasn't fond of the basement. "That basement was eerie," she said.

Strohm mentioned that the theater's history includes at least one tragic event. "I believe they had a boxing match there and there was a fighter there that was killed or died after the fight," she said.

Indeed, the newspaper's archives include accounts of an April 30, 1930, match that killed 21-year-old boxer Henry Ramsey. (See sidebar, Page A2.)

Current co-owner Bill Bush said he was personally unaware of that historical event when, one day early this summer, he was inside the theater's office and heard what sounded like a punching bag workout in progress near the stage. The sound, which seemed muffled by the intervening walls, abruptly stopped when Bush opened a door to the auditorium. He said he returned to the office, the sound resumed after a few minutes, and it again stopped the moment he thrust open the auditorium door.

Melisa Bush said she hasn't heard the punching bag sound, but she has twice seen what appeared to be young children crossing in front of the stage in the dark during a movie screening, and then seemingly evaporate from her view before she could reach them.

IPRG's Robbins, assistant director on the OK investigation, said the group's preliminary research of candidate sites in Enterprise led them to select the theater over other locations. The Bushes' experiences weren't part of that background information.

The first part of Saturday night's field work included a slow tour of the theater. While investigator Kennedy used a handheld cell sensor to pinpoint stronger electromagnetic fields, other team members checked for any moist areas. Robbins, who has a degree in psychology, explained that mold and electrical fields both can cause people to experience anxiety and in some instances hallucinate.

Following the tour, the team proceeded with posing questions in darkened rooms. Although none of the members claimed to possess spiritual medium abilities, they directed their inquiries nonetheless to any non-corporeal entities that might be present. According to the team, digital voice recorders are capable of picking up sounds not audible at the time they are made. Investigators later don headphones to listen to their recordings, and that's when the team is most apt to hear anything of interest.

Before the lights went off and the questions began, the team asked the five non-members to refrain from whispering. Also, no one was to wander away during a dark-room investigation.

Team members' digital camera shutters and flashes frequently broke the quiet and darkness as the investigators sought to capture any visual evidence. Earlier in the evening, Robbins had explained that the team had chosen not to bring a digital video recorder because that device has wires. "Especially when you don't know a location, it sets up a lot of trip hazards," she said.

Investigators' questions and other statements to possible entities unknown ran the gamut from guessing at personal profiles - asking assumed presences if they were stage performers or movie buffs, for example - to conveying investigators' non-threatening intent. Repeatedly they invited anything paranormal to knock on a structural surface or unharmfully touch an investigator.

The team's work in the dark consumed more than two hours. Early on, in a downstairs room near the front of the building, theater employee Phil Caldwell announced that something had touched his ear in the dark. He said he couldn't be sure that it wasn't a bug, however.

Nearly two hours later, the group had its other interesting moment when it was inside a long storage area adjoining the theater's old coal furnace room below the main floor. Kennedy said she heard a man's voice faintly say, "Hello."

It wasn't until the room-by-room inquiry was completed, however, and everyone had gathered in the theater's lobby to compare notes that the night's bombshell dropped. "Someone grabbed my arm when I was on the stage," Robbins said. More specifically, she said, she had felt a man's fingers brush along her hand, in which she was holding her tape recorder.

She said the touching occurred right after another team member invited a response from the unknown. She said she had decided against immediately telling the group because she didn't want to influence the remainder of the proceeding.

Robbins said the group would soon examine sound and photo records from the evening and report results to the Bushes in exactly seven days - on Saturday, Oct. 22. Despite the touching sensation she had personally reported, she said further investigation of the OK would only be warranted if the electronic record supported it.