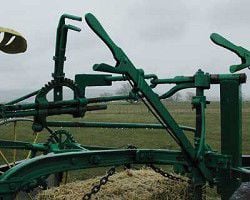 <I>Kathleen Ellyn/Chieftain</I><BR>Farm equipment dripped rain and did little else at the Plowing Bee this year. 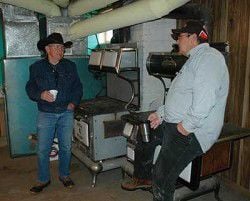 <I>Kathleen Ellyn/Chieftain</I><BR>Del Stanley and Tip Proctor reminisce around the cookstove. Most teamsters checked the weather before making the trip and some opted for other adventures, but other folk came for the fellowship and talk.

<I>Kathleen Ellyn/Chieftain</I><BR>Farm equipment dripped rain and did little else at the Plowing Bee this year.

<I>Kathleen Ellyn/Chieftain</I><BR>Del Stanley and Tip Proctor reminisce around the cookstove. Most teamsters checked the weather before making the trip and some opted for other adventures, but other folk came for the fellowship and talk.

The Lee Scott Memorial Plowing Bee, held near Joseph each spring, was celebrated indoors this year. It poured rain the entire weekend, making the ground too heavy and sticky to plow.

Mules munched on alfalfa in the drizzle, perfectly happy to give it a miss.

The teamsters, for their part, retired to the Liberty Grange to eat good homemade food and shoot the bull. "When we can't plow we eat, drink coffee and BS," laughed Del Stanley of Joseph.

Nine teamsters had been expected, but most had looked out their window and called off the project.

Some teamsters still came; Carolyn Witty of Enterprise left the mules home but came for the fellowship. Cowboys Tip Proctor and Dick Hammond who came to watch, got roped into hauling in the pies for the feast.

"If I'd known you were going to make a stew, I'd have brought a ground hog," Tip teased the cooks.

Others took a motoring tour to Imnaha in the rain and returned to the Grange later in the day.

Giving way to Nature is, well, natural to a farmer said Stanley. "You can't find a bigger environmentalist than me," he said.

Tip and Dick had brought a photo album featuring horses and the cowboys who rode them and the group soon got down to swapping tales.

Stanley, a former horse logger talked about the good old days and bragged about how he could take timber off the river bank and never harm the riparion zone.

"You couldn't tell I'd even been in there," he said.

Stanley reckoned as how horse logging might come back as environmentalists realized the value and mechanical loggers could no longer make a buck.

Things had changed, Stanley allowed - or maybe the old ways of horse-logging and mule plowing had always been environmentally sound.