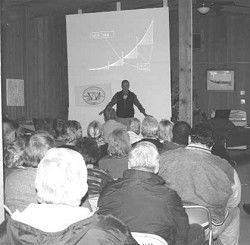 <I>Photo by Corey Wicks/Chieftain</I><BR>Michael Greason, a forestry advisor in New York State, spoke about the need to find more markets for various timber products, such as small-diameter Ponderosa pines.

<I>Photo by Corey Wicks/Chieftain</I><BR>Michael Greason, a forestry advisor in New York State, spoke about the need to find more markets for various timber products, such as small-diameter Ponderosa pines.

With a team of experts sequestered in Lear's Banquet Room over the weekend, slavishly hunkered down in front of their laptop computers, paper easels and notepads, the Rural Design Assistance Team (RDAT) perhaps vaguely resembled the economic equivalent of the Manhattan Project - the team of science wizards that built the atom bomb.

After a whirlwind tour of the county last week, and various meetings with community members, the 10-member team of economic wizards put their heads together to brainstorm ways of improving the local economy. On Tuesday morning, the team gave its final presentation to a literal standing-room-only crowd at Lear's.

"We really can appreciate your values," said Jane Willeboordse, of Baltimore, Maryland, during a PowerPoint presentation of the group's findings. "You're tied to the land. You have a history of this and it came through very clearly."

"You have this incredible vibrant history. This is the wealth that you have," Willeboordse said.

Willeboordse presented a list of recommended action items that will be included in the group's final published report. The first item the group recommended was the building of a "Business Value Added Center."

Wilson Orr, of the RDAT Team, said that the Business Value Added Center would be intended "...to strengthen the connections among all of Wallowa County's economic sectors."

"This is where you bring a synergy together. Artists don't normally talk to loggers but that conversation needs to happen," Orr said.

The wood carving at the Toma's Conference Room is an example of the type of thing that can happen when disparate groups pool their ideas, he said.

"Agriculture needs to be important to more than just farmers," said Jane Mt. Pleasant, of the RDAT team. The county needs to work to educate members of the general public, "to draw in more sectors of the community to care about agriculture," Mt. Pleasant said.

Secondly, in the first phase of the RDAT process, Willeboordse said that the county should launch an education council. Thirdly, the county must deal with the Mount Howard Fire Hazard.

"You could set yourself back 50 years with a major fire there," she said.

Next, Willeboordse said, the county needed to draft an ordinance ensuring that places in the county would be set aside for workforce housing.

In the second phase, over the next 90 days, the county needs to draw up a Wallowa brand logo that could be placed on local products, she said. The "Hands on Lands" project should then be implemented, involving various projects on U.S. Forest Service lands, clearing trails and so forth, she said.

The county should begin working on grant proposals and start a review of the fees it is charging for various services and permits, Willeboordse said.

Many members commented on the sheer beauty of the county.

"It's stunning. It's incredibly remote. It's the pristine landscape that a lot of us dream about that we don't often see on the East Coast," Willeboordse said last Thursday at an informal gathering at the Joseph Community Center.

"It's obviously stunningly beautiful," said Kara Norman, of Frederick, Maryland. She is the director of downtown Frederick Partnership, a Main Street Program.

"It's been great to see how many people care about this community ... it's great to see that spirit," Norman said.

"The landscape is amazing," said Will Anderson, of the Maryland Business Roundtable. "I'm really struck by the boldness of the community to take a good hard look at the problems ... I think it's a really good foundation."

In his final presentation, Anderson said that the county needed to create a "Wallowa Campus" concept where all the school districts of the county would pool their resources to go after grant funding. There needed to be better integration between the schools in the county, he said. The county should get a person to spearhead the Wallowa Campus project, create a council, write a master plan, and begin an integration project immediately, he said. The money would then be used to develop various projects to improve local schools, including having local people teach their areas of expertise to others.

The RDAT team met with area students to get a sense of what their concerns were for the future.

"It's a great energy from the kids I've met," Anderson said Thursday.

One of those students, Kodi LeViner, a senior at Joseph High School, said that she thought it was nice to be involved in the RDAT process.

"It was really quite interesting to hear what they want to do," LeViner said.

The RDAT team in the coming days will print up about 1,000 copies of its final report and make a portion of them available to the public to review.

"You guys have been awesome hosts," Willeboordse said.