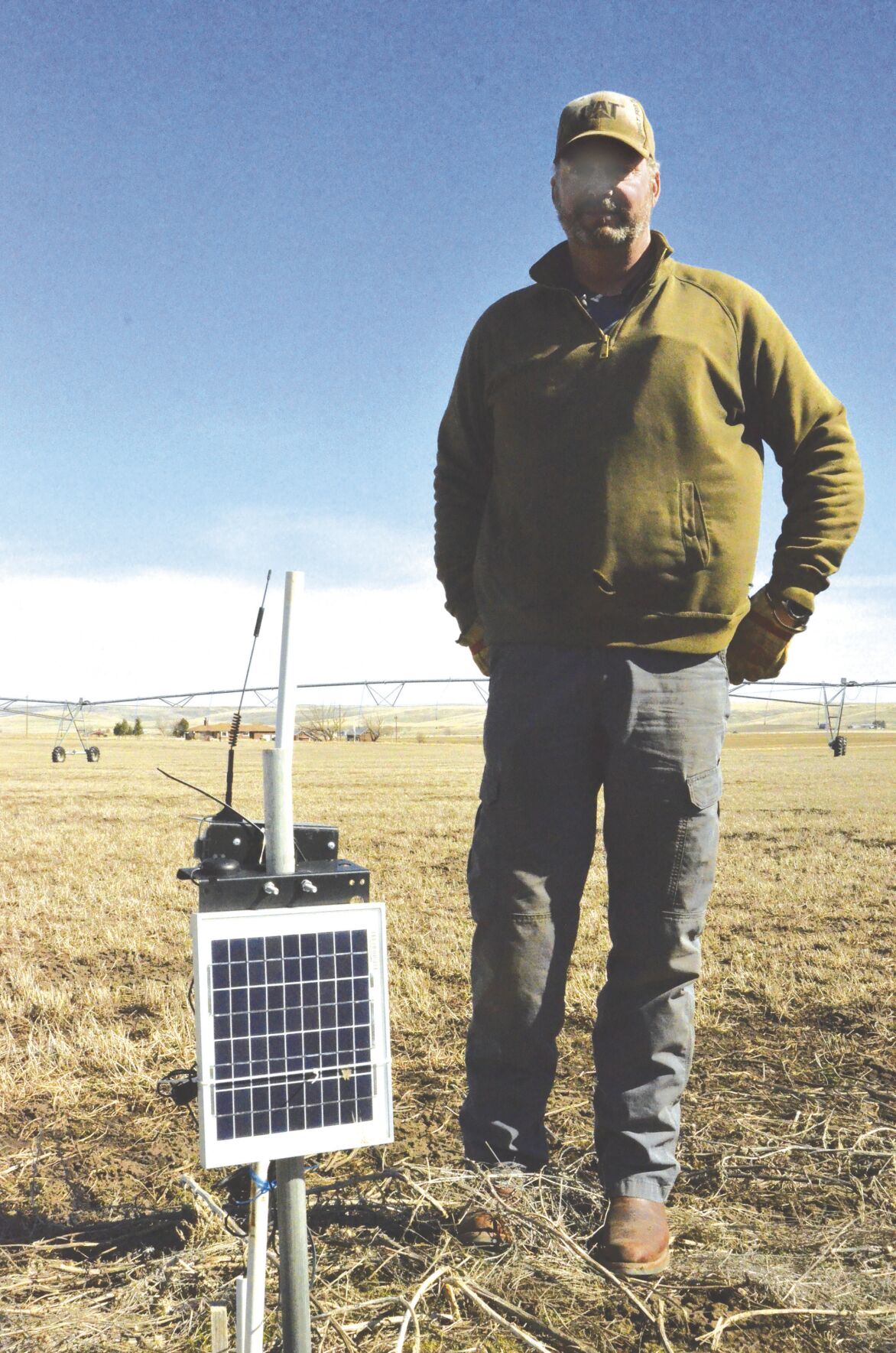 Mark Butterfield stands by a soil moisture monitor on land he farms east of Joseph on Thursday, April 1, 2021. He said the monitor indicates the moisture is looking good for the upcoming planting season. 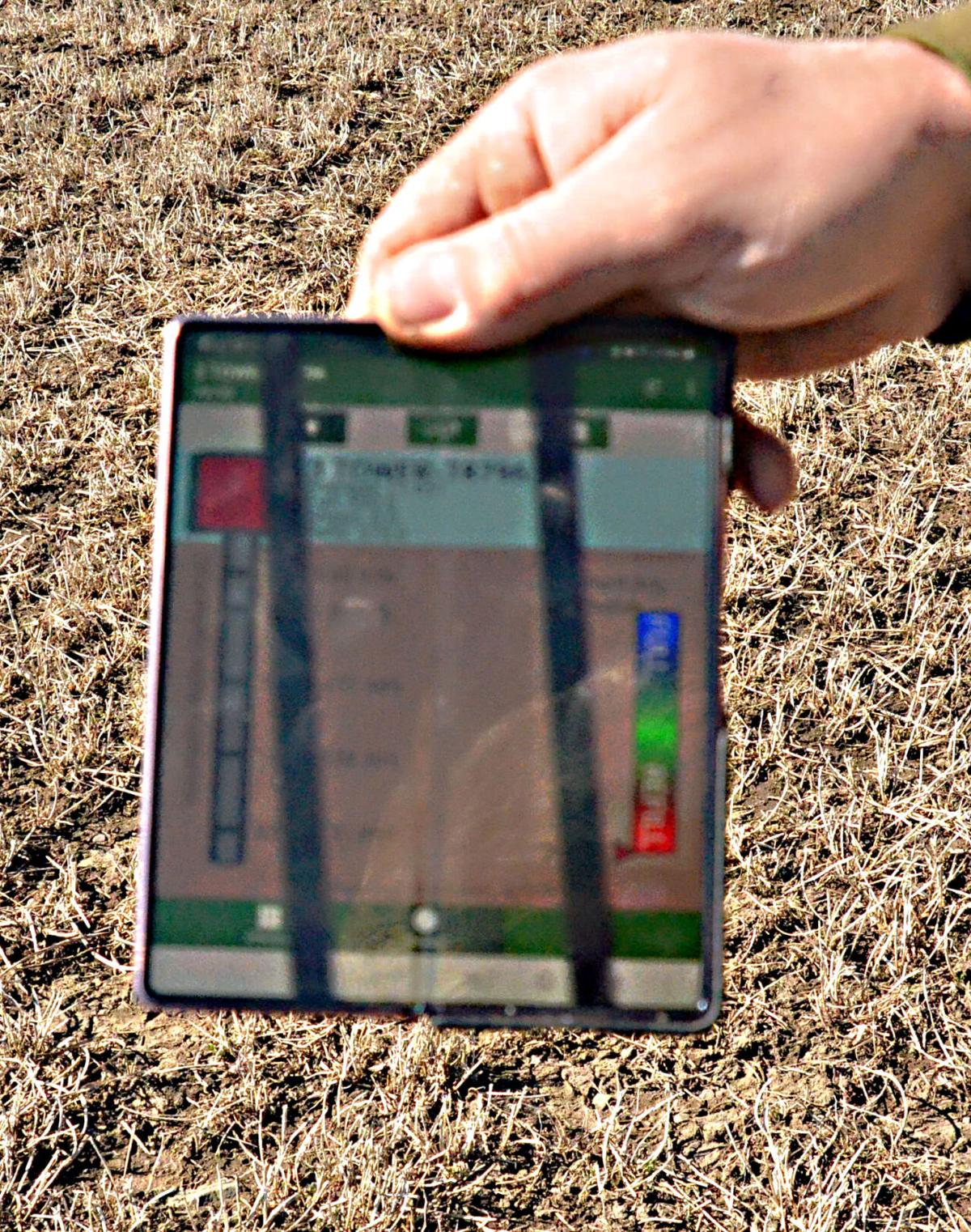 Mark Butterfield shows the app on his cellphone on which he receives the information sent by a soil moisture monitor in one of the fields he farms east of Joseph. He said Thursday, April 1, 2021, the moisture content was looking good for the upcoming planting season.

Mark Butterfield stands by a soil moisture monitor on land he farms east of Joseph on Thursday, April 1, 2021. He said the monitor indicates the moisture is looking good for the upcoming planting season.

Mark Butterfield shows the app on his cellphone on which he receives the information sent by a soil moisture monitor in one of the fields he farms east of Joseph. He said Thursday, April 1, 2021, the moisture content was looking good for the upcoming planting season.

WALLOWA COUNTY — A few weeks ago, Wallowa County farmers gearing up for spring planting were worried the snowpack wouldn’t be sufficient once irrigation season arrived.

Then came March — and repeated snow and rainstorms.

In mid-February, Tim Melville, of Cornerstone Farms, was particularly concerned that soil moisture on the floor of the Wallowa Valley was seriously down. He noted that on Wednesday, Feb. 10, according to Oregon SNOTEL, the snow-water equivalent was only at 62% of normal at the SNOTEL site at Mount Howard. But by Thursday, April 1, it was up to 88% of normal.

“I can be a bit more optimistic, but what really counts is where that’s at about the first of May,” he said last week. “100% back in November doesn’t mean much, but 100% the first of May, and you’re in pretty good shape.”

Dan Butterfield, of Butterfield Farms east of Joseph, said his high-elevation farm off Liberty Road has gotten plenty of moisture. On Friday, March 26, he said he’d received about 6 inches of snow there.

“I kind of wish it would dry up,” he said, adding that the level of Wallowa Lake is coming up satisfactorily. “I usually don’t get too worried about it. I feel like we’re in pretty good shape.”

In fact, growers are counting on more precipitation in April and May. The head gates for the Wallowa Lake Irrigation District open May 1.

Kurt Melville, a partner in Cornerstone Farms with his dad, Tim, and brother, Kevin, also is optimistic on local soil moisture.

“A lot of it depends on how frozen the ground was and how well the moisture soaked in,” he said. “That differs with every field and soil type.”

“Most of our soils around here have soil-holding capacity of about 2 inches per foot,” Kurt said.

But that varies throughout the county.

“Every single soil’s different depending how much clay, sand, rock there is,” he said.

“Most of our soils around here are fairly shallow,” he added. “We’re really relying on some April, May and June rains.”

He said areas such as the Palouse in Idaho and Washington have deeper topsoil with a greater moisture-holding capacity per foot.

“They can get away with more wintertime moisture storing for the following year,” Kurt said.

“Going into spring, I feel fairly good about where we’re at. It’s really important to get more rain for dryland (nonirrigated) ground.”

Patrick Thiel, of the all-organic Prairie Creek Farms, also isn’t worried about the soil moisture. He’s confident the mountain structure around the valley adds considerably to the moisture needs of farmers.

“Because of the mountain structure, we’re really consistent in getting that moisture storage,” he said. “But that could really change in summer if it gets warmer. … I usually need to irrigate in September and October where most don’t.”

Unlike most farmers in the valley, Thiel’s farm is almost entirely row crops — different varieties of potatoes, beets, carrots and quinoa on three plots of land near Joseph, on the East Moraine and near Lostine.

Unlike grain and hay growers, many of whom will start field work in a week or two, Thiel’s prime planting season is May and June.

“I’ve only got a certain number of growing days,” he said. “I tend to be later.”

But he’s been watching the weather and getting prepared, both as a farmer and as a volunteer firefighter. What he’s seen has his optimism up.

While many farmers rely on Oregon SNOTEL or other soil moisture reports, some have testing equipment on their farms. Mark Butterfield, who farms 2,200 acres of hay, wheat and cover crops his cattle graze east of Joseph, is one of those.

His solar-powered soil moisture monitor showed the moisture at about 70% Thursday, April 1.

The monitor, which is located right near a pivot line that irrigates from ditches drawing water from the irrigation district, provides information via an app he reads on his cellphone. He said when the moisture gets too dry, he can turn on the pivot line — after May 1.

“You can read it from anywhere — heck, I could go to Jamaica, though I wouldn’t advise that,” he joked.