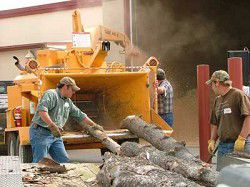 <I>Elane Dickenson/Chieftain</I><BR>Volunteers demonstrate a chipper at work during the recent biomass project grand opening. Problems with the normal supply of fuel have plagued the plant since then. 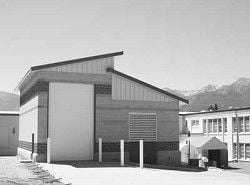 <I>Elane Dickenson/Chieftain</I><BR>Volunteers demonstrate a chipper at work during the recent biomass project grand opening. Problems with the normal supply of fuel have plagued the plant since then.

Enterprise School District's history-making biomass plant project hit a snag recently - literally. Maintenance manager Kent Kunkle reported to the school board at the Nov. 3 meeting that the auger system that picks up the wood chip fuel and feeds it into the boiler had repeatedly choked on thatch-like material in the fuel, causing the boiler to automatically shut down.

"It takes me an hour to chip that stuff out of the auger," he reported. "At this time the situation is very unsatisfactory. The fuel and the feed system are incompatible."

In addition, Kunkle said, Western Sprinkler of La Grande informed him that the sprinkler system in the plant was not operational and had not been properly inspected. Because of the report and the difficulties with the fuel, the boiler was shut down and has remained down for more than a week.

The cavalry, however, is already on the way.

On Nov. 6, the design firm McKinstry, which created the system, sent their business development manager, Cam Hamilton and project director Trey Skivone to meet with Kunkle and others to discuss the problem. The first finding of the group was the sprinkler system was properly operational for testing purposes and the boiler could be fired up again. Other adjustments to the sprinkler system, including an automatic dial-up of emergency services in case of fire, will be added in the future.

Other members of the discussion group included School Board Chairman Nils Christoffersen and David Schmidt forest products director for Upstream 21, the company that now owns fuel supplier Community Smallwood Solutions (CSS) of Wallowa. CSS was originally a Wallowa Resources project before it was sold to Upstream 21.

CSS is the company of choice for the fuel contract because of a desire by all parties to use the biomass project to stimulate the economy of the valley. The company actually sells the fuel to the district for $3 less per ton than it can get on the open market, said Christoffersen. "It's really a community benefit," he said. "The company could actually sell all of their fuel, as is, to Boise Cascade."

Nevertheless, the company has been working with the district to address problems as they come up.

So far, those problems have consisted of stones and dirt scooped into the fuel by loaders, too much moisture content and fuel of improper consistency for the system (thatchy). The problem of rocks in the mix has already been addressed and CSS plans to add a hammer mill to their conveyer system as soon as possible to break the wood chips down further. Once the biomass boiler is feeding properly, engineers expect the heat generated by the unit to dry the fuel to the proper moisture content as it is conveyed to the boiler.

For now, McKinstry plans to run a drier, finer fuel through the system and station a man to monitor the feed and collect further information - at their expense.

In the meantime, superintendent Brad Royse has been putting off tours of the plant requested by numerous other school districts.

"They're champing at the bit to come and inspect Enterprise biomass plant," Royse reported.

Those districts are watching with interest as Enterprise works out the bugs in the system. The biomass project is the first to be installed in an Oregon school district in over 50 years.

The project was projected to save the district at least $76,000 per year in energy costs in addition to boosting the local economy by using readily available renewable fuels.