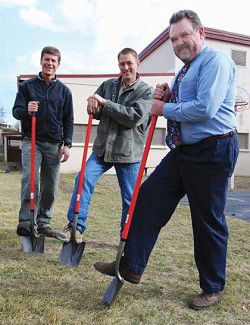 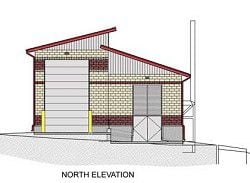 This is an artists rendering of the north elevation of the building that will house Enterprise new biomass furnace boiler, plus fuel, near the Enterprise High School griculure shop building.

This is an artists rendering of the north elevation of the building that will house Enterprise new biomass furnace boiler, plus fuel, near the Enterprise High School griculure shop building.

Local officials broke ground Nov.15 on the Main Street side of the Enterprise School District campus for the construction of the new biomass fuel heating system.

Called the brainchild of Nils Christoffersen by Enterprise School Superintendent Brad Royse, the biomass heating plant is the first constructed at a public school in Oregon, Royse said. Christoffersen is both a school board member and executive director of Wallowa Resources, which was instrumental in making the idea for using a renewable energy source a reality.

Officials project savings exceeding $80,000 each year, based on diesel fuel costing $2.55 per gallon. The latest purchase of diesel fuel for the schools current heating system cost $3.15 per gallon, indicating the savings could be substantially more.

One advantage to using biomass technology will be the ability to use wood waste currently being either burned, or put into landfills, to heat the entire campus, Christoffersen said.

Royse estimated the new system would consume 650 tons of ground wood chips in a year, costing approximately $32 per ton. A principal supplier will be the Community Smallwood Solutions post and pole plant in Wallowa, he said.

Construction begins this week by Joseph contractor Louis Perry, who was hired to erect the building to house the boiler for the new system. The cinder block building will be built on the north side of the high school on top of an old basketball court. The district plans to build a new court nearby.

Included in the project are plans to upgrade the school's outdoor lighting system, Royse said. Old PCB ballasts will be removed and new energy-efficient bulbs will be installed, he said.

Officials estimate the entire project to cost $1.9 million. Quality Zone Academy Bonds, a provision of the U.S. tax code that provides a source of funding that may be used for renovating school buildings, will finance the project, Royse said.

The district contracted McKinstry Essention, Inc., of Seattle, to study, design, and build the system and then measure its effectiveness. Construction manager Craig Johnson said he hopes to have a ribbon cutting ceremony in mid-April.

An additional financial bonus for building the new heating system comes in the form of $448,000 in business tax credits the district can sell to Oregon businesses at 70 cents on the dollar, potentially netting the district an additional $313,600 which will be applied toward paying off the loan, Christoffersen said.

Wallowa Resources contracted a study in 2004 with the Biomass Energy Resource Center in Vermont to evaluate using low-grade biomass to heat schools in Wallowa County, Christoffersen said. The study determined the Enterprise school was an excellent site for a fully automated wood chip heating system, he said.

One of his tasks is to help find additional sources of supply so the whole thing doesn't go up in smoke," Christoffersen said.

The Wallowa School District is also trying to switch to biomass fuel to heat its schools, Christoffersen said.

The Oregon Department of Energy defines biomass energy as solar energy stored in organic matter and considers it a renewable energy source, since growing new trees and plants replenishes the supply.

The department says biomass fuels supply 3 percent of all energy used in the United States, and in 2002 provided 47 percent of all renewable energy consumed in the nation. Biomass supplied almost six times the energy of geothermal, solar and wind energy sources combined.

Globally, biomass meets about 14 percent of the world's energy needs, the department said.

Gov. Little moves Idaho back to Stage 3 of reopening, does not issue mask mandate