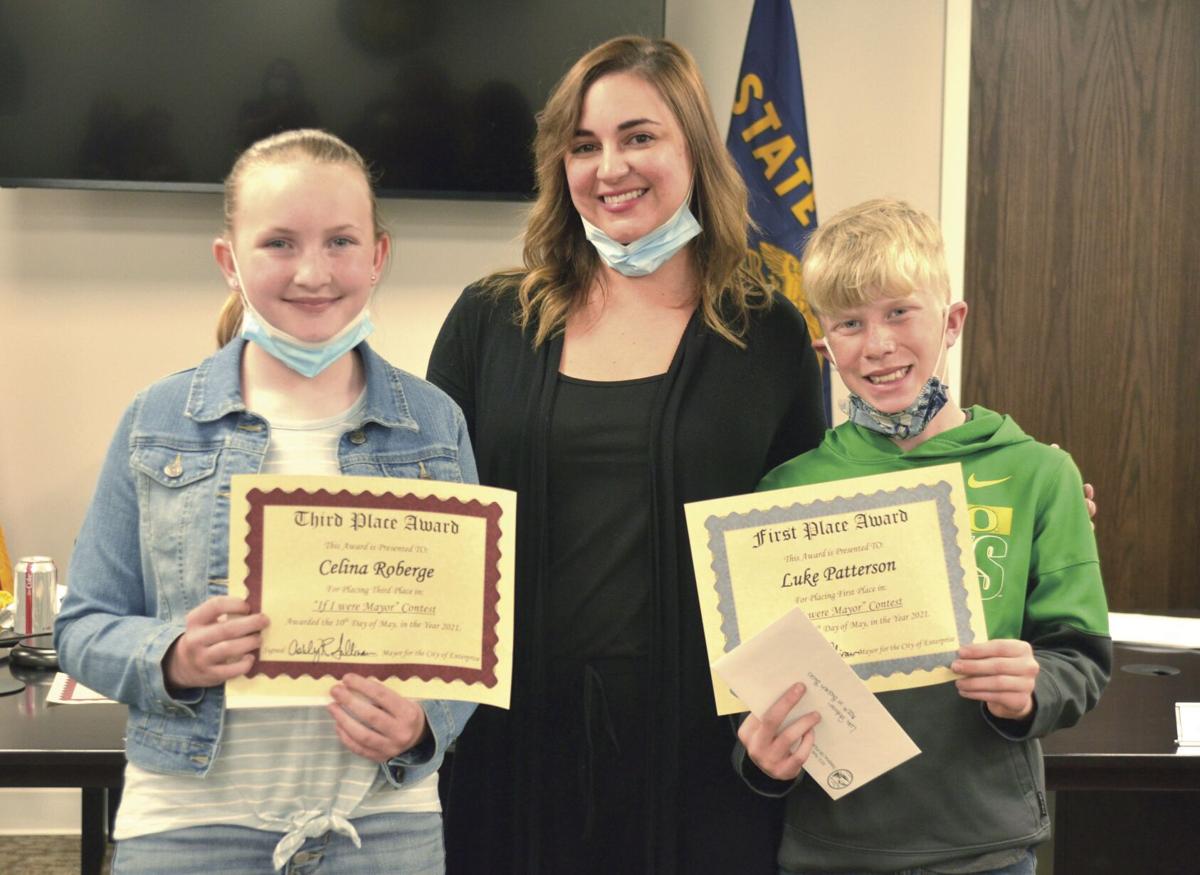 Enterprise Mayor Ashley Sullivan stands with two of the three winners in the recent “If I Were Mayor” contest at the Monday, May 10, 2021, City Council meeting. At left is Celina Roberge, who won third place. At right is Luke Patterson, who won first. Tyson Herold, who won second, was unable to attend the meeting. 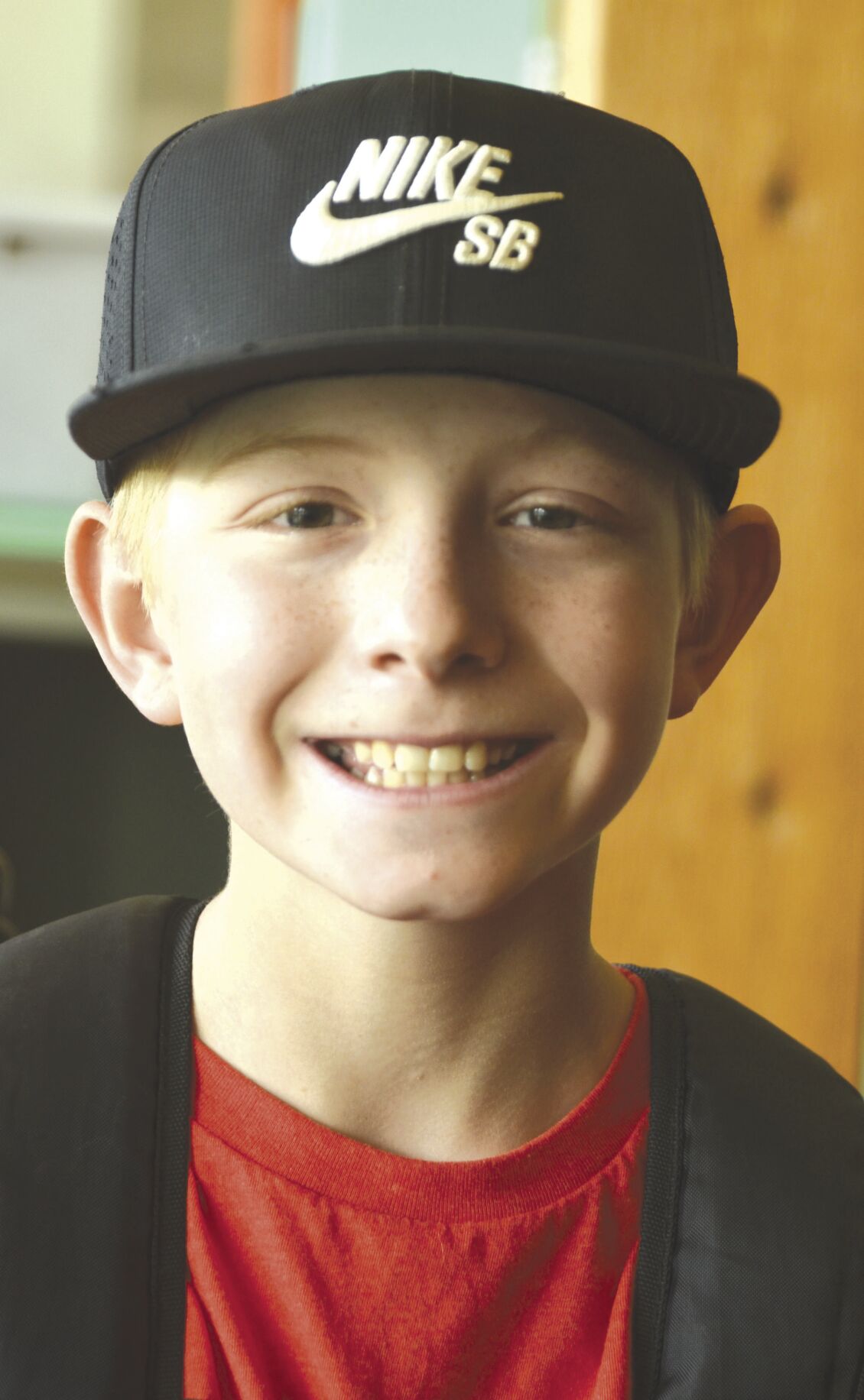 Enterprise Mayor Ashley Sullivan stands with two of the three winners in the recent “If I Were Mayor” contest at the Monday, May 10, 2021, City Council meeting. At left is Celina Roberge, who won third place. At right is Luke Patterson, who won first. Tyson Herold, who won second, was unable to attend the meeting.

ENTERPRISE — What may be the next generation of political leaders in Enterprise was honored Monday, May 10, as the City Council recognized the winners of the “If I Were Mayor” contest during the regular council meeting.

“Things would be different around here,” wrote Luke Patterson, the first-place winner in his entry. “I would make sure that we had a better way to get your opinion heard.”

He recommended a suggestion box with a person designated to read the suggestions.

“People need to be heard,” the 12-year-old Luke wrote.

Luke, the son of Patrick and Amy Patterson, was recognized along with second-place winner Tyson Herold, 11, son of Justin Herold and Eva Barnes, and third-place winner Celina Roberge, daughter of Adam and Donna Roberge.

All three are in Donna Yost’s sixth grade class at Enterprise Middle School. As first-place winner, Luke will compete in the state competition. Each of the kids won “Buckskin Bucks” redeemable at businesses in Wallowa County. Luke won $100, Tyson got $50 and Celina received $25.

The state contest is sponsored by the Oregon Mayors Association and accepts entries from three grade-level categories. Yost’s class was the only local one to participate this year.

First-place statewide winners in each of the three categories will win a gift valued at $500, according to the OMA website. These students will receive their prizes at an awards luncheon held during the OMA Summer Conference in North Bend July 29-31

“We haven’t actually asked the Enterprise School District to participate in the ‘If I Were Mayor’ contest for some time,” city Administrator Lacey McQuead told the council April 12. “This year, I was contacted by the Oregon Mayors Association and asked if the city of Enterprise would like to participate again.”

Yost was proud of her students’ achievements.

“I was impressed with some of their ideas for improving things in our city, some of the improvements that could be made. They were really insightful,” Yost said last week. “It was one of those things for kids in the sixth grade where they could enter writing contests and it was good for them. They were able to show patriotism and have the freedom to express themselves.”

“I’d say Luke had me feeling like he could teach me a thing or two,” she said last week. “It’s neat that these kids know what they want for their future and can put it all into words with such conviction. They’ll be great leaders one day.”

Although the kids will have to wait until they’re 18 to run for mayor, Sullivan looks forward to their contributions.

Tyson had some thoughts on private property and animals.

“I would make sure to say ‘no trespassing’ on anyone’s property unless you have their authority,” he wrote. “I would also make sure that there are no deer or animal killings in town, making most exotic animals illegal.”

“I have tripped on them thousands of times,” she wrote.

The kids all recommended improvements to the city park and support of small businesses. They weren’t unmindful that city government can’t just wave a wand and order things to happen — that most things cost money. One suggestion offered was fundraisers that would donate to businesses.

Celina wants to see the public pool brought back at the park, having been told of its former existence by her mom.

Tyson wants to see more support for sports and funding for any needed sports equipment.

Other ideas also were put forward, such as encouraging local Boy and Girl Scout troops, encouraging the wearing of face masks amid the coronavirus pandemic — but not forcing anyone to — a local movie theater, a bowling alley, a game store and supporting the police.

As for a future in politics, Luke and Tyson both would consider it, but Celina wasn’t so sure.

“Probably not,” she said. “That comes with a lot of responsibility that I don’t really want to deal with.”

Although the mayor doesn’t have jurisdiction beyond city limits, all three kids were mindful of the beautiful area Enterprise is located in.

Luke, in particular, said taking care of the environment is part of being a “good person.”

He recommended harsh punishment on litterers.