Director Tyler Soares talks to his cast during a rehearsal. 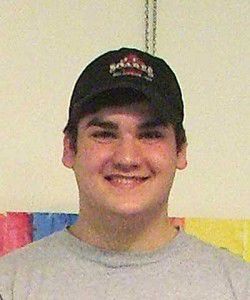 Director Tyler Soares talks to his cast during a rehearsal.

Directing a play was the closest thing to his career goal Wallowa High School senior Tyler Soares could come up with for his senior project. "My career choice is film directing," he said.

Soares made his directorial debut last week with a one-act comedy titled "Life O' the Party" at the Beth Johnson Room in Wallowa Elementary School. Curtains went up on the three performances Thursday through Saturday, Feb. 26-28.

The play met with an enthusiastic response, attracting a modest audience of 35 the first night, double that number the second night and 50 for the finale.

The play will be produced one more time - during 7th period (about 2:45 p.m.) at Wallowa High School for WHS and Providence Academy students Thursday, March 5.

Tyler Soares is a talented senior who has performed in many local productions in the past, including four MidValley Theatre Co. plays, as well as high school and Missoula Children Theatre's plays.

He enjoys visual art, and has won top awards at the Wallowa County Junior Art Show with his drawings. He also likes music, and plays the guitar. As a sideline, he is working on local history documentaries with a video camera.

" It's a combination of things I like to do," Soares said about his career goal. He has already been accepted at Montana State University where he plans to major in film studies.

Directing a play for his senior project was a suggestion that came from Kate Loftus, director of MidValley Theatre. "She's my mentor," Soares said. He read a number of scripts from her collection, and "Life O' the Party," by Donald Payton, stuck in his mind. Not only did he enjoy the plot, but it had about the right number of characters, an even dozen.

The play centers around Courtney Maxwell (played by Angela Burns), who is throwing a party, and her discontented younger brother, Lucas (Tyler Gockley) who manages to throw a monkey wrench into the festivities.

"It's hilarious," he said of the comedy.

"The audience had a great time and was very impressed," said one of Soares' biggest fans, his mother Marilyn.

She said she felt that Kate Loftus' professional influence had rubbed off on her son and was also noticeable with the many cast members who'd performed already in her productions.