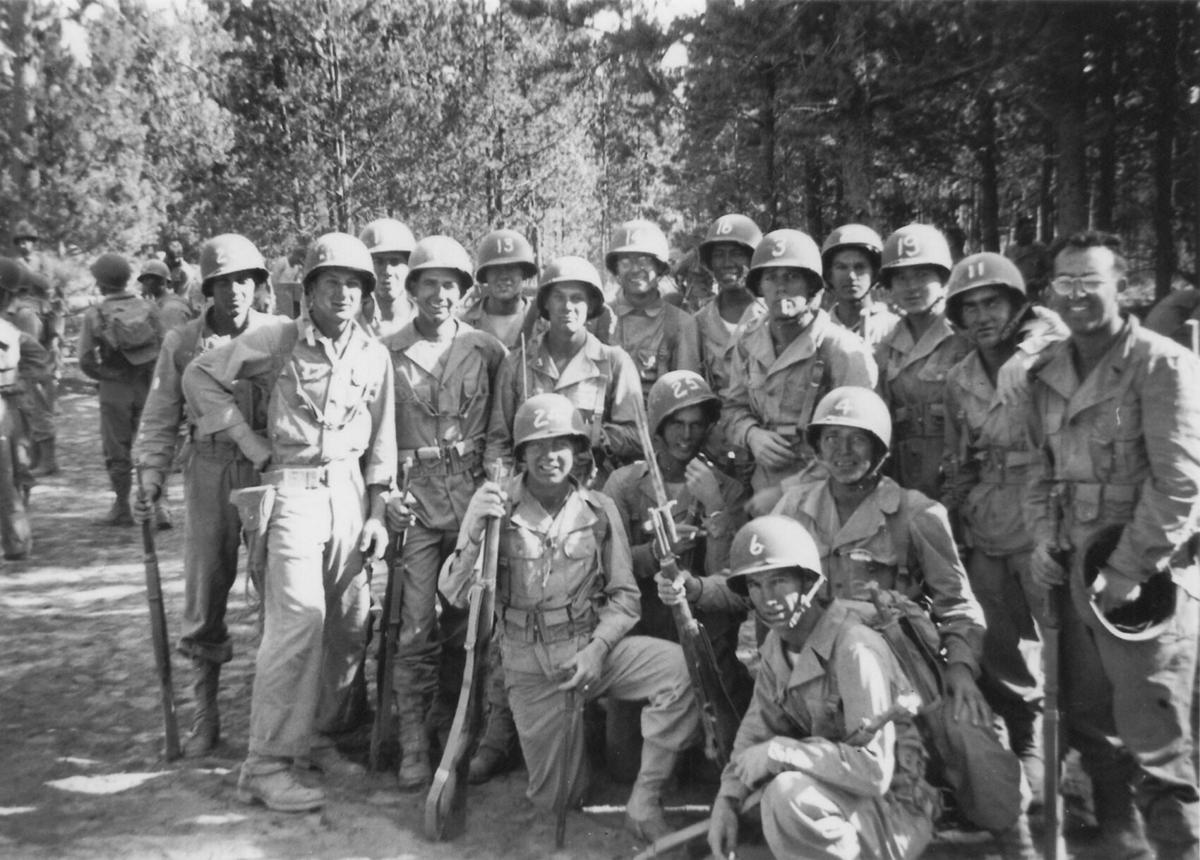 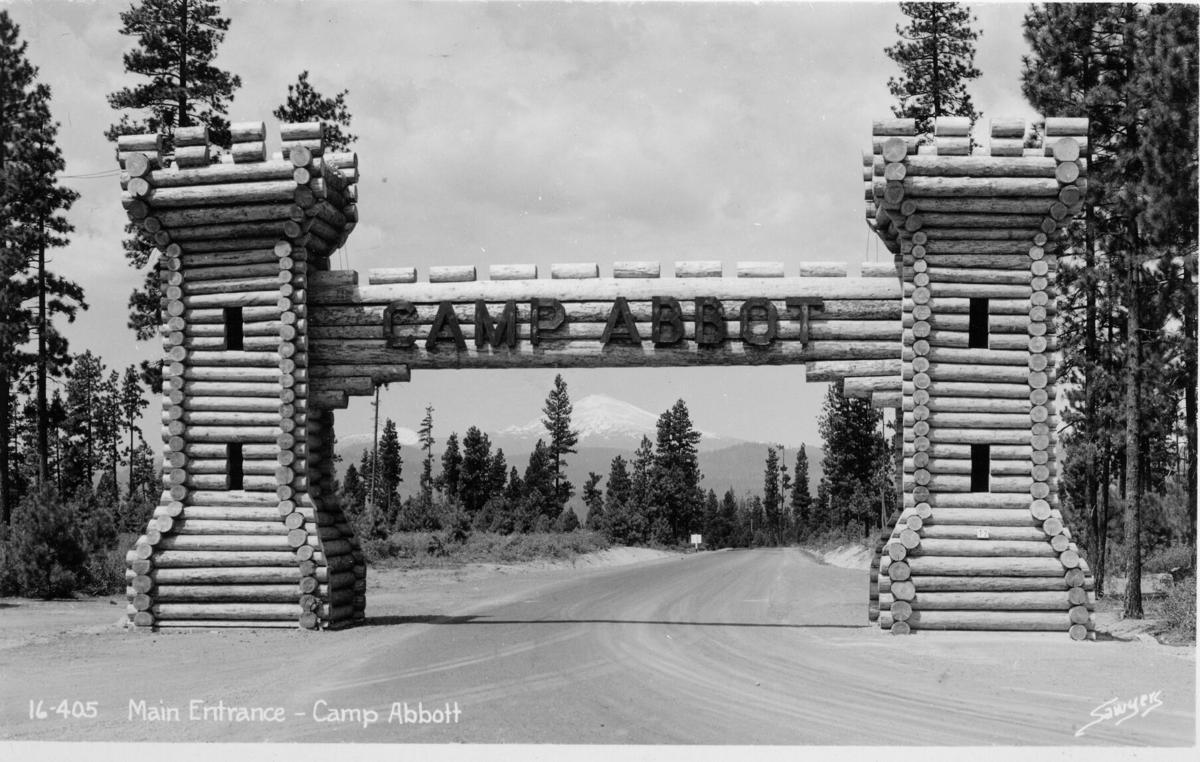 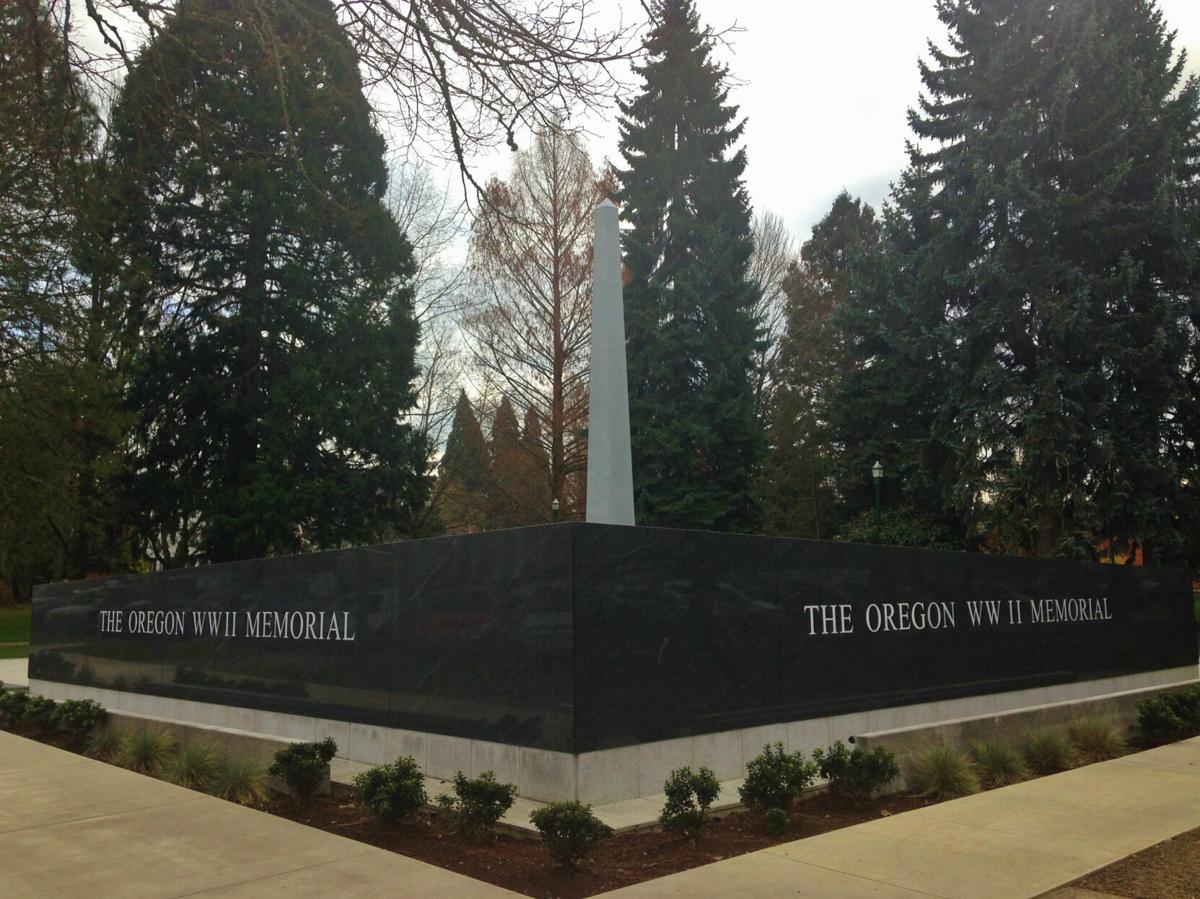 The Oregon WWII Memorial is located near the State Capitol in Salem. It bears the names of 3,771 Oregonians who were killed in action during the war, between 1941 and 1945. 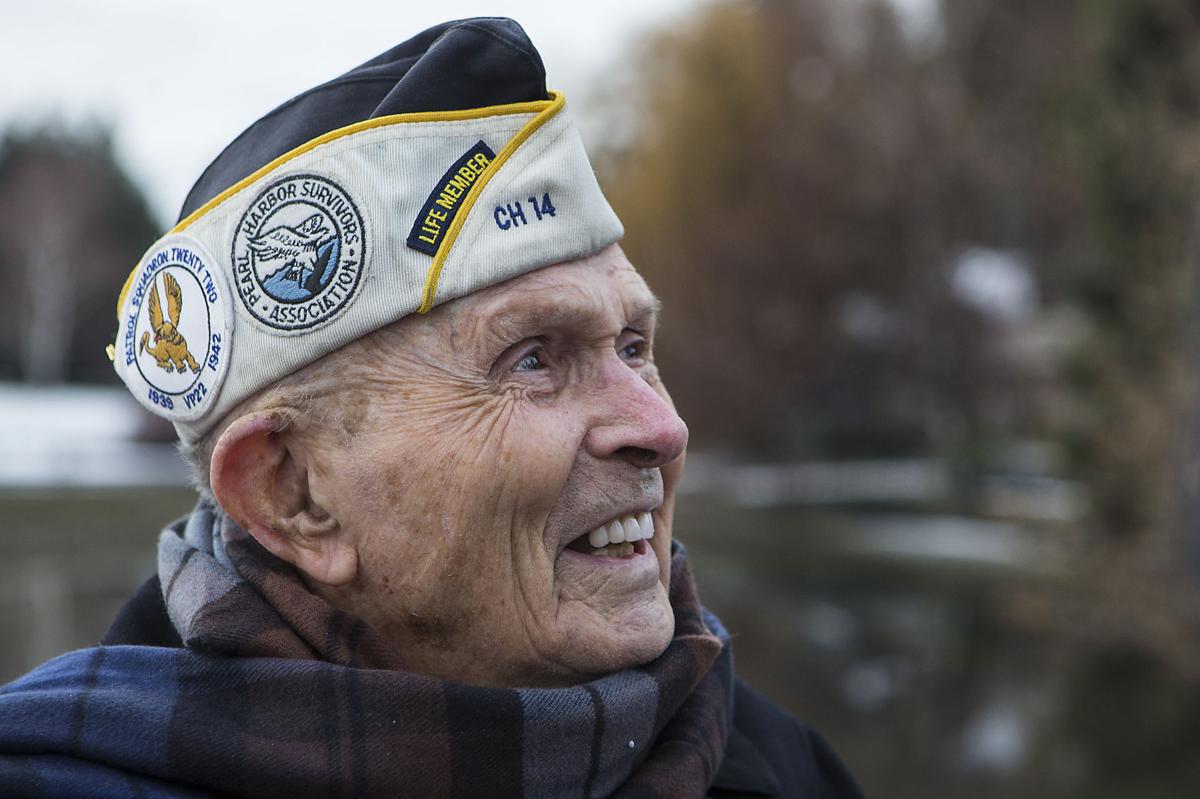 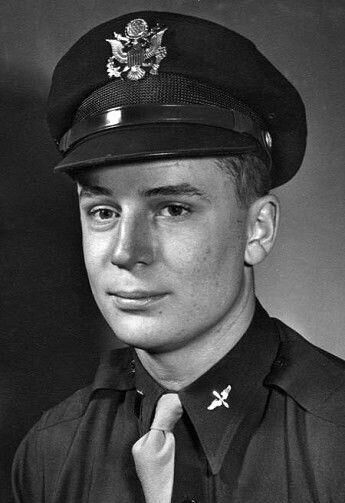 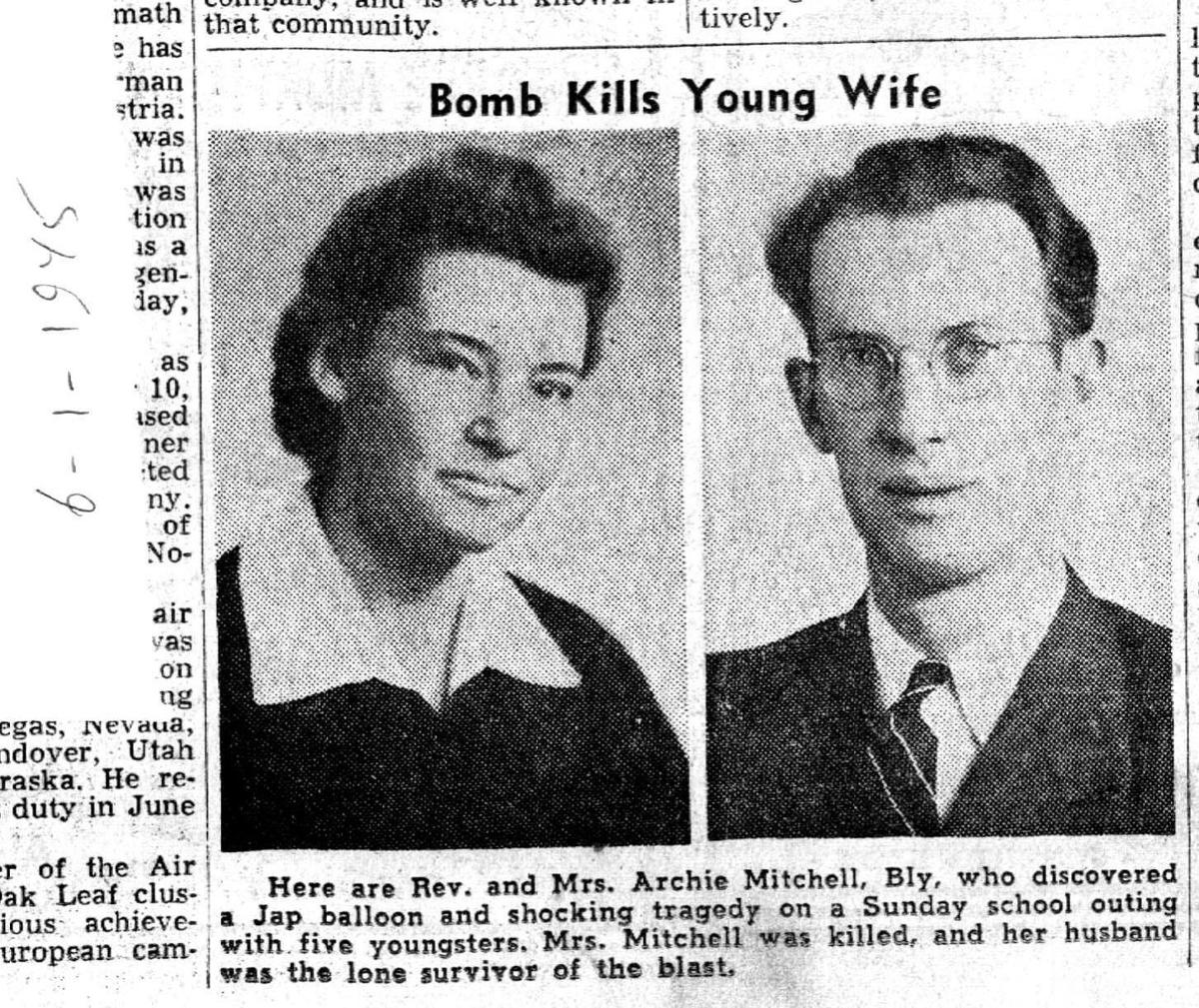 A newspaper clipping from June 1, 1945 shows Rev. Archie Mitchell and his wife, Elsie Mitchell, who was killed May 5, 1945, when she and five Sunday school students found a Japanese balloon bomb that exploded.

This wartime photo is a shot-down Japanese fire balloon that was reinflated and photographed. A balloon like this landed near Bly, Ore., and killed Elsie Mitchell, 26, and five children aged 11 to 14. 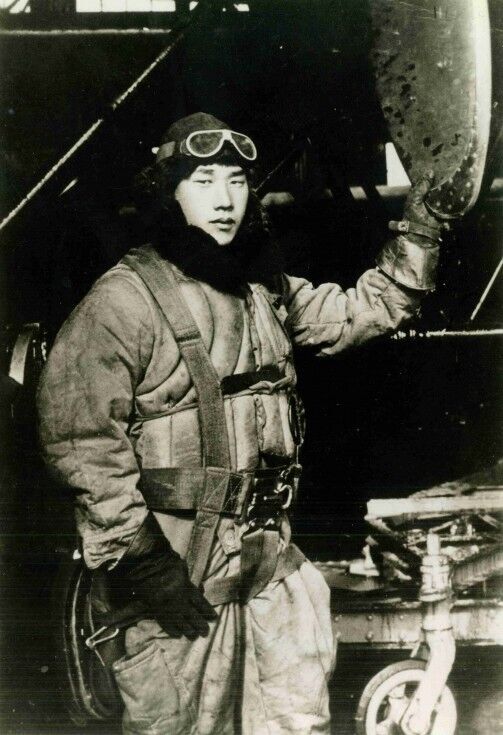 Imperial Navy Flying Warrant Officer Nobuo Fujita, was the pilot of an attack near Brookings in September 1942. It was the only bombing of the U.S. mainland in World War II. 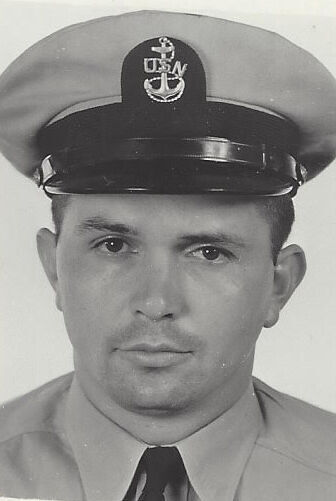 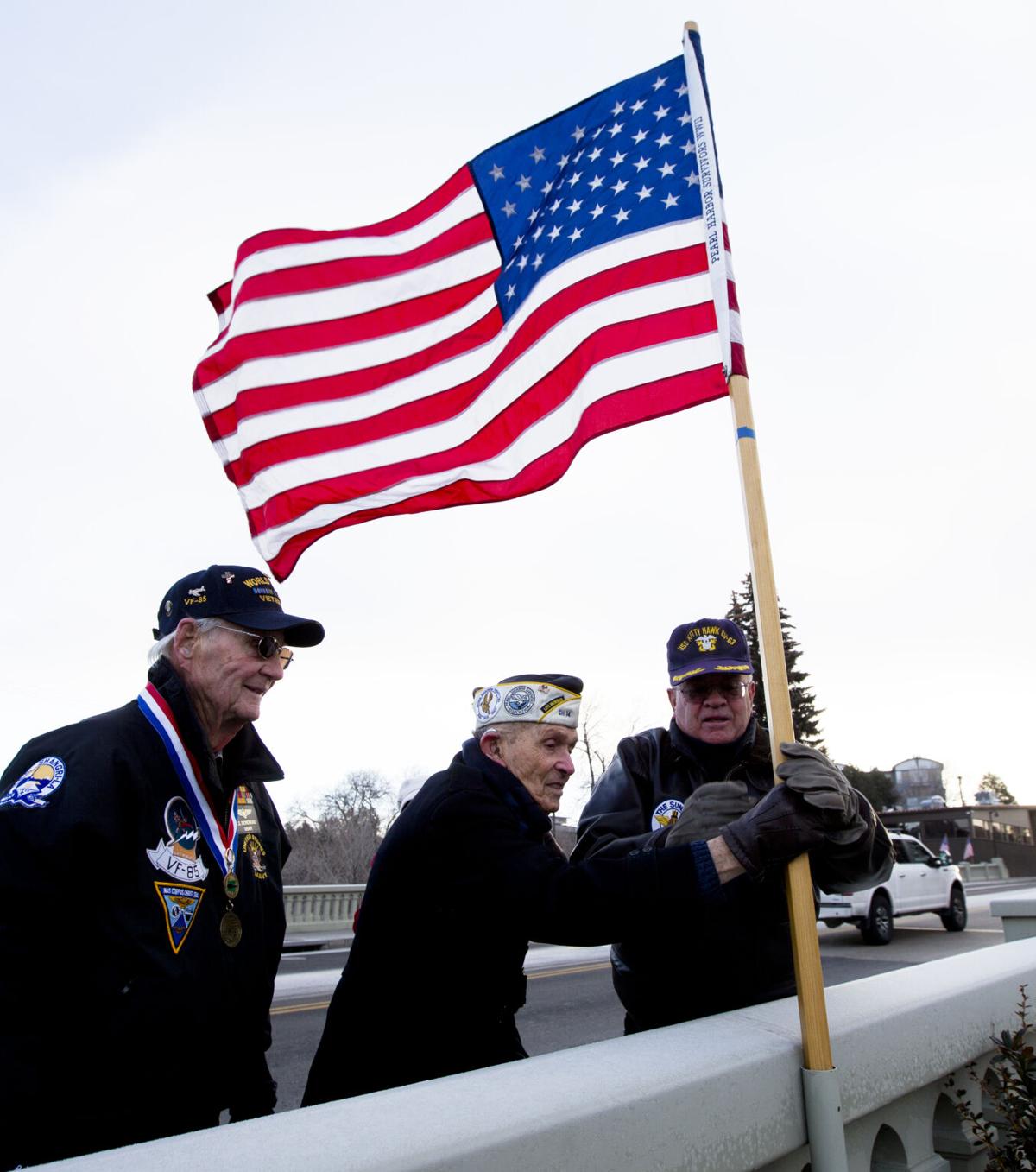 During the 77th anniversary of the Japanese attack on  Pearl Harbor, Dick Higgins the only known Pearl Harbor Survivor living in Bend, posts a U.S. flag on the Veteran's Memorial Bridge in Bend on Dec. 7, 2018. Standing on either side of Dick Higgins are WWII Navy veterans, Leon Devereaux, left, and Les Joslin. 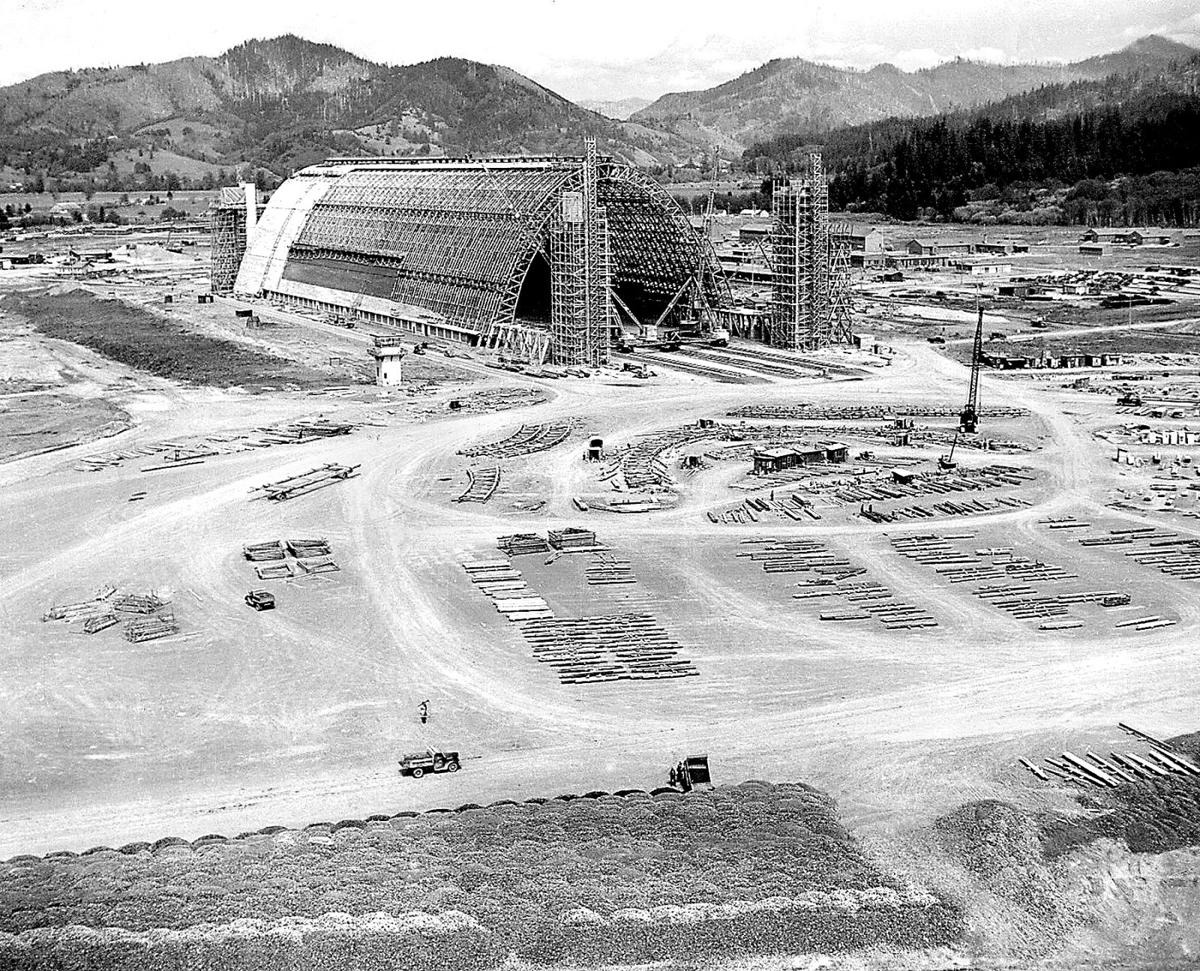 Tillamook Naval Air Station Dirigible Hangar B as seen from the air while it was under construction, in the summer of 1943.

American flags line the entryway for visitors to the USS Missouri, now a national historic site and the ship on which Japanese officials signed surrender documents on Sept. 2, 1945, officially ending WWII.

The Oregon WWII Memorial is located near the State Capitol in Salem. It bears the names of 3,771 Oregonians who were killed in action during the war, between 1941 and 1945.

This wartime photo is a shot-down Japanese fire balloon that was reinflated and photographed. A balloon like this landed near Bly, Ore., and killed Elsie Mitchell, 26, and five children aged 11 to 14.

BEND — In July 1945, Leon Devereaux was a Navy ensign flying a 4JU Corsair fighter, shooting down a Mitsubishi "Betty" bomber off the coast of Japan.

Less than two months later, Devereaux was again on a mission above Japan, flying over a battleship in Tokyo Bay. His Corsair was part of the air armada above the USS Missouri, where Japan was signing the documents of surrender.

"That was fast — we weren't expecting the war to be over yet," Devereaux said. "We knew there was a hard-nosed bunch in Tokyo wanted to keep fighting."

It had been just that spring that Germany had surrendered. Still, there was one more enemy to go. The path to victory over Japan was clear — but the cost of D-Day-style invasions would be long and bloody. President Harry Truman would say after the war that "Operation Downfall" would have lasted well into 1946 and cost up to a half-million American lives — an overestimation, according to some post-war military historians.

Then two flashes changed the timetable. The atomic bombing of Hiroshima and Nagasaki in early August 1945 incinerated two major Japanese cities, killing at least 110,000. Higher estimates are double the number. It would cause Emperor Hirohito to overrule military hardliners and capitulate to the Allies.

Devereaux, 97, who would go on to serve as Bend's mayor, is among the rapidly dwindling number of Americans for whom service in World War II isn’t something in history book, but part of their life’s memories.

Of the estimated 16 milion who served in World War II, less than 300,000 remain, down from more than 935,000 in just the past five years. In Oregon, just 7,300 veterans remain. Each day more than 200 veterans of the war die across the nation. Obituaries tell the toll.

“After graduation from Astoria High School in 1943, he enlisted in the Navy and served his country in the Pacific Theater during World War II,” reported the Astorian on the April death of Donald Bryce Hoyer, 94, of Seaside.

It’s a daily fact of life.

Bob Stangier was fairly certain he would have added to those casualty numbers if the fighting had continued. World War II had taken him from Pendleton to Corsica, then Italy, flying 70 missions as a pilot of B-25 Mitchell bomber. His plane was badly damaged on a raid and limped home to its base in Allied-occupied Italy on one engine. When the end of the war came, Stangier was a first lieutenant at Santa Ana Army Air Base in California, on his way to the Pacific.

"I had been in combat and was apprehensive about going back," Stangier said. "I was in the Army. They told you where to go and what to do, so I was in the pipeline to the Pacific."

"Gen. MacArthur said we could take Japan with just a few thousands of losses, but another general said we could lose a million or more," Stangier said. "I had no confidence in MacArthur's math."

That even MacArthur's estimate was wildly high only because of the atomic bomb, Stangier said.

"I believe I am alive because of the atomic bombs," Stangier said. "These idiots who are against it should have been in the Army in 1945."

For a state of just over 1 million people at the time, Oregon played a leading role in the history of World War II.

Yōsuke Matsuoka, Japan's foreign minister who negotiated the 1940 alliance with Nazi Germany and fascist Italy, once lived in Portland and was a 1900 graduate of the University of Oregon Law School. Charged with war crimes, he died of tuberculosis in a Tokyo prison in 1946 before the end of his trial.

Fort Stevens at the mouth of the Columbia River was the only military base on the continental United States to be attacked. The Japanese submarine I-25 surfaced at night in June 1942 and fired 17 shells from its deck gun, blowing up the fort’s baseball field backstop but little else.

Brookings was the scene of the only enemy bombing of the war, when the same submarine launched a seaplane armed with incendiary bombs meant to set off a forest fire that would draw troops away from military missions. A small area was scorched, but no blaze erupted. Nubuo Fujita, the pilot, would return after the war to apologize to the resident of Brookings, give the town his family's samurai sword and plant a peace tree where the bombs fell.

Klamath County was the site of the only American casualties of an enemy attack in the United States. Japan launched 9,000 balloon bombs late in the war, designed to float across the Pacific Ocean with the hope, again, of igniting forest fires.

A memorial was erected in 1950, with Gov. Douglas McKay saying those killed were casualties of World War II “just as surely as if they had been in uniform.”

Camps were built to train American servicemen — Camp Abbott on the Deschutes River south of Bend and Camp Adair north of Corvallis trained thousands of soldiers. The Umatilla Army Depot near Hermiston stored massive amounts of munitions in underground silos and bunkers.

The most impressive military project was the two hangars built at Tillamook Naval Air Station. Among the largest wood-frame buildings in the world, they housed blimps patrolling the coast to look for enemy ships and submarines.

Nearly 200,000 people moved to Oregon during the war to work in defense industries. Henry Kaiser's shipyard straddled both sides of the Columbia River, where 100,000 workers — most new to the state — built "Liberty Ship" transports and smaller escort aircraft carriers. Drawn by defense industry jobs, Oregon's Black population in Portland grew from about 2,500 in 1940 to 25,000 in 1944. The Portland Housing Authority put out statements that "while we do not discriminate, we do segregate." Most Black people had to live in the new Vanport development built by Kaiser. The city was destroyed in a 1948 flood.

More than 3,500 captured German military personnel were sent to six camps in Jackson, Benton, Marion and Polk counties, with two in Malheur County. They were paid 80 cents per day to work, mostly in agriculture. Conscientious objectors to the war were paid nothing while working at Civilian Public Service Camp No. 56 near Waldport. While laboring on government construction projects during the day, they would write in the evening, leading to two books of stories and poetry.

Worries of a possible Japanese invasion of the mainland United States led to President Franklin Roosevelt issuing Executive Order 9066 on Feb. 12, 1942 ordering the relocation of Japanese immigrants and Japanese-Americans away from the West Coast. In Oregon, the Army declared all areas west of U.S. Highway 97 as Military Area 1 and ordered the relocation of those covered by the president's order. Most were sent to an internment camp in Minidoka, Idaho. Only a small community in the Oregon portion of Treasure Valley in the far southeast of the state did not have to move.

Over 120,000 Japanese-Americans from Oregon, Washington and California endured relocation.

Oregon welcomed one of the first Navy ships returning from Japan, the cruiser USS Amsterdam.

“We boarded our ship and headed for Okinawa to pick up wounded and dead Marines and moved them to Astoria, Oregon, which threw a festive welcome,” recalled Anthony Galli, a Navy veteran from Pennington, N.J., in a recent essay for CentralJersey.com.

Dick Higgins of Bend doesn't remember much about how he was celebrating the Victory Over Japan while training sailors in Florida. It had been a long war for him — he had been there from the minute it began for the United States: Sunday morning, Dec. 7, 1941 when bombs started raining down around him on Ford Island at Pearl Harbor.

Higgins recalled he looked up in the sky and saw unfamiliar planes with "meatballs" painted on their wings — the red rising sun of the Japanese planes.

A radioman on a Navy PBY flying boat, he would go on to fight his way across the Dutch East Indies and other spots.

Higgins was eventually sent stateside to use his combat experience to train the thousands of sailors being were being rushed to the fight on both sides of the war.

Though he has plenty of memories of World War II, Higgins says he isn't quite done. He's regularly gone back to Pearl Harbor to mark the sacrifice of the soldiers, sailors and Marines he knew. He's even met with Japanese veterans of the attack, who came in a spirit of reconciliation between the people of the two nations.

Next year will be the 80th anniversary of the Pearl Harbor attack.

World War II was the largest and deadliest conflict in history. The war was fought on every continent except Antarctica. Up to 60 million people died.

There were two main alliances:

The war is traditionally given the September 1939-September 1945 timeframe, but China and Japan were fighting as early as 1931. The U.S. did not enter the war until December 1941.

A wide swing in estimates is due to the large number of civilian casualties in areas such as Eastern Europe and China, where post-war records are considered undercounts.

More than 20 million military members died around the world.

Oregonians became prisoners of war. By war’s end, 598 had returnedto Allied forces and 172 died in captivity.

Oregon service members from World War II listed as missing in action and presumed dead. They include Army Pvt. Elmer E. Fryar, 29, of Portland, a Medal of Honor recipient.

service members from Oregon were buried overseas in American Battle Monuments Commission cemeteries overseas. Together with the 887 MIAs, they represent almost half of Oregon’s total war dead.