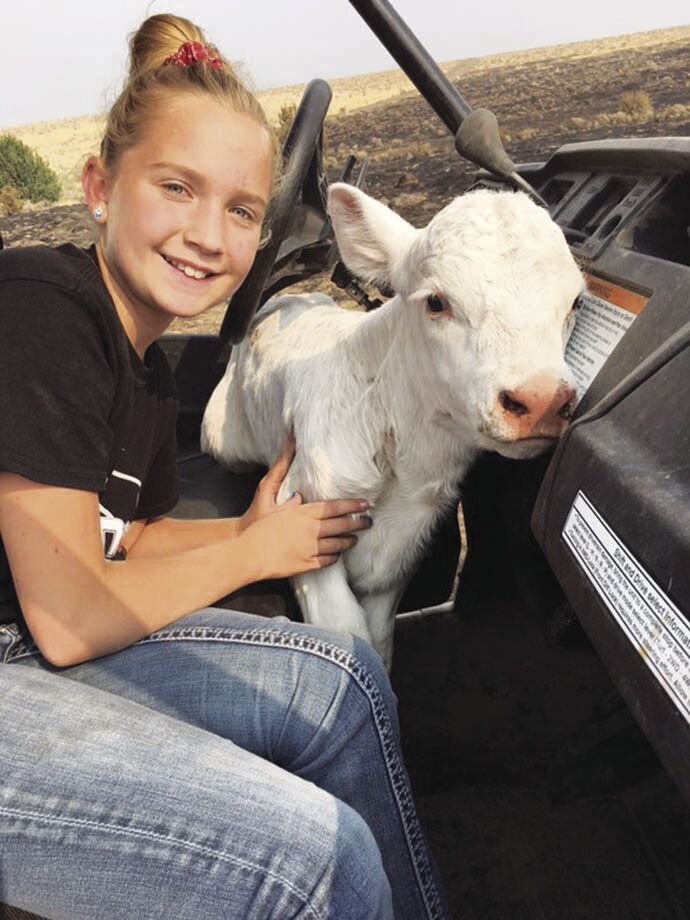 Mollie Romans with the calf from her family's Charolais herd that was rescued from the Indian Creek fire in Malheur County. 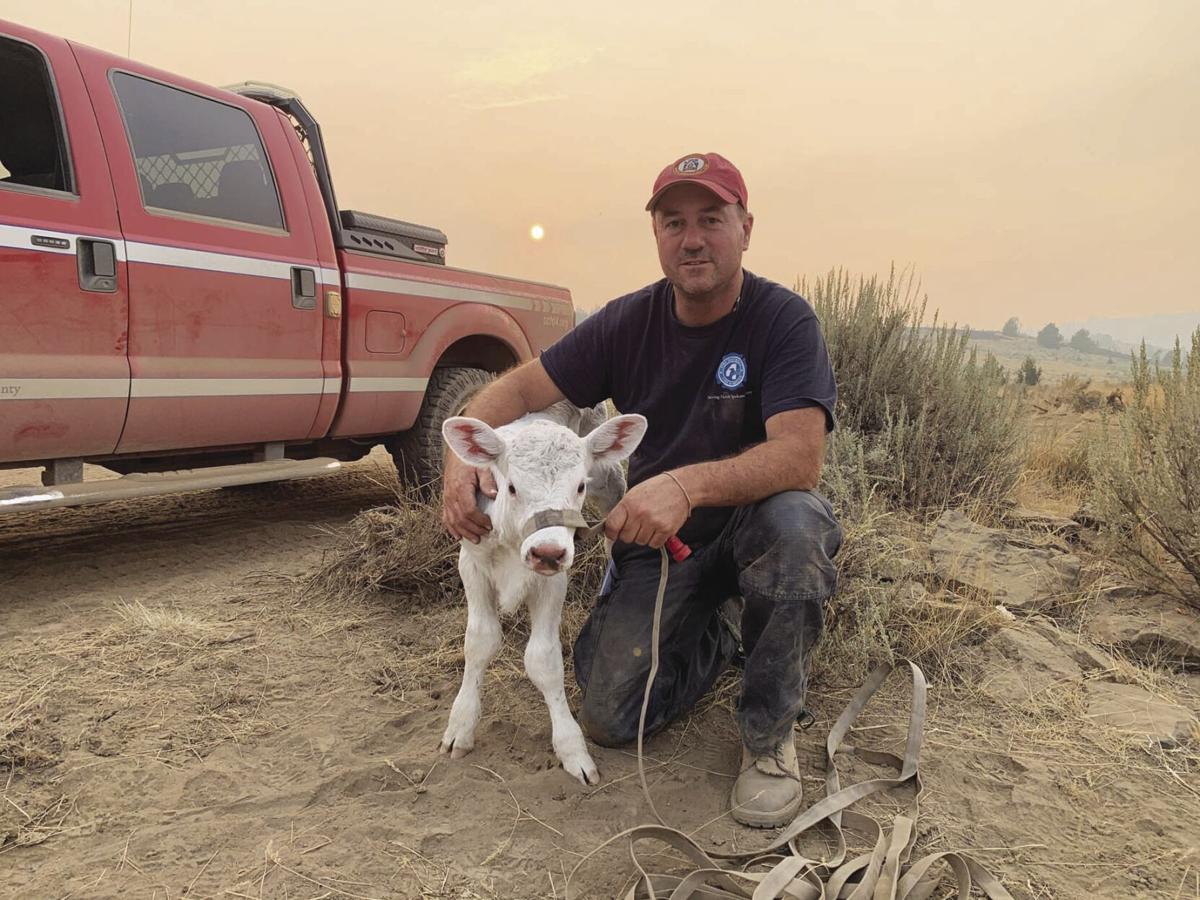 Firefighters rescued a newborn calf stranded inside the Indian Creek fire in Malheur County on Saturday. Firefighter Russell Hamilton, above, delivered the Charolais calf to the Romans family. 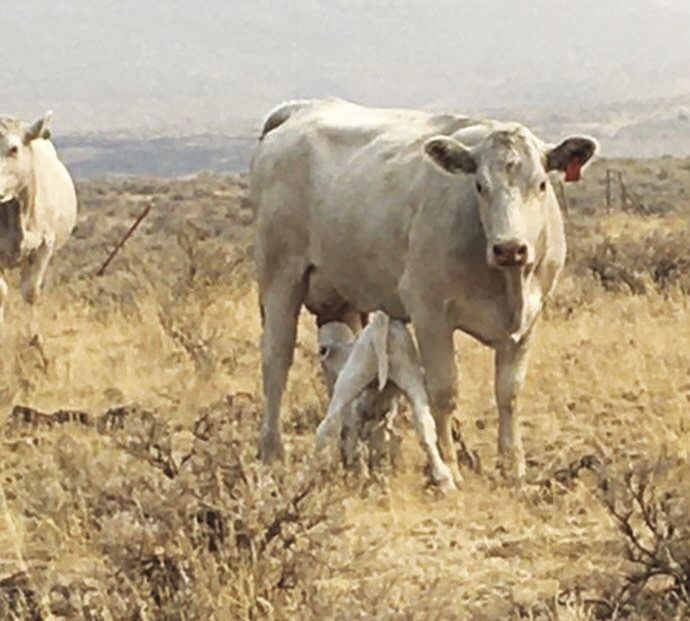 The calf was reunited with its mother on Sunday. 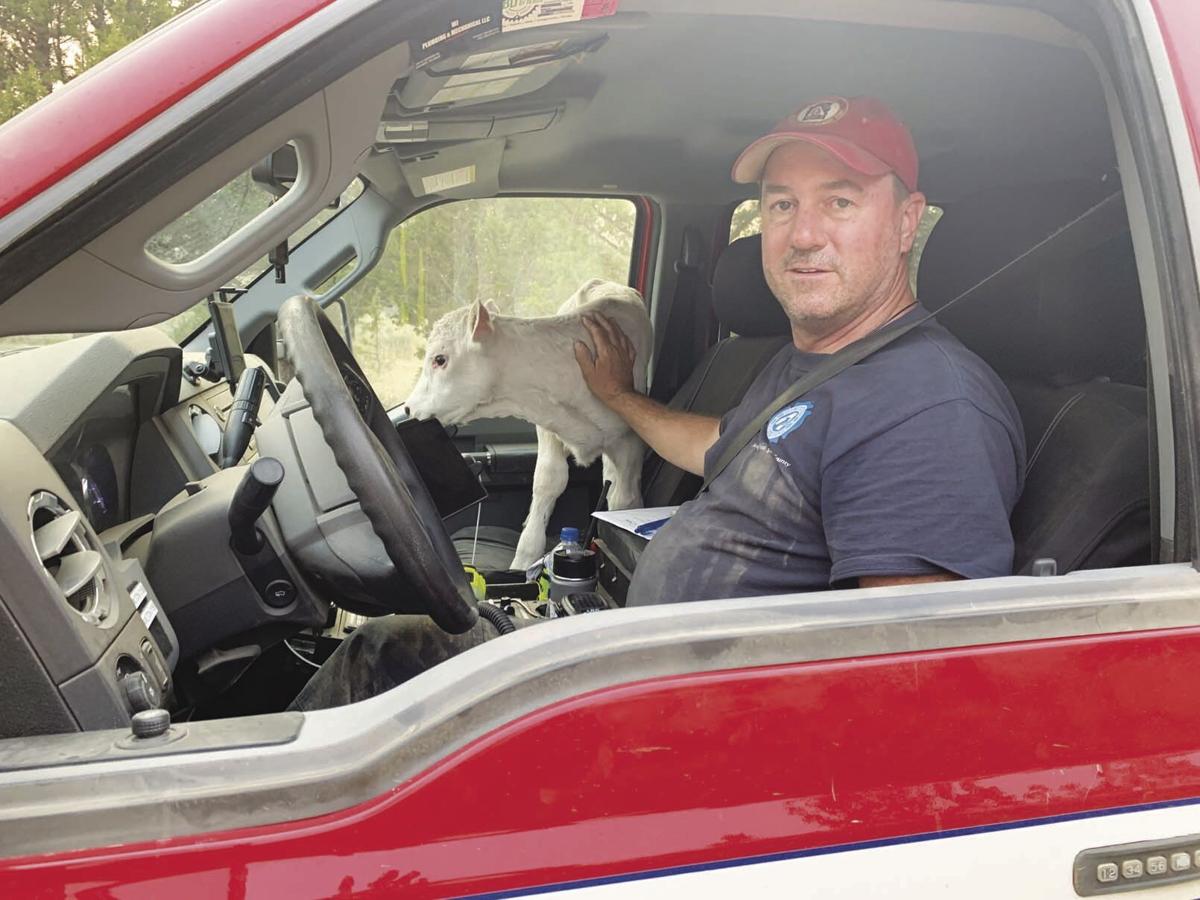 Russell Hamilton, a fire operations trainee from Spokane, Wash., delivered a newborn Charolais calf to its owners from the Romans Ranch on Sunday.

Mollie Romans with the calf from her family's Charolais herd that was rescued from the Indian Creek fire in Malheur County.

Firefighters rescued a newborn calf stranded inside the Indian Creek fire in Malheur County on Saturday. Firefighter Russell Hamilton, above, delivered the Charolais calf to the Romans family.

The calf was reunited with its mother on Sunday.

Russell Hamilton, a fire operations trainee from Spokane, Wash., delivered a newborn Charolais calf to its owners from the Romans Ranch on Sunday.

BAKER CITY — The Indian Creek Fire scorched grass that would have fattened the Charolais cattle that Jeff Romans’ family owns, but Romans was still thankful about one aspect of the blaze.

Had the fire started not on Sunday, Aug. 16, but a week or so later, Romans, whose family’s ranch is at Westfall, about 50 air miles south of Baker City, would have had a much bigger problem.

More than a hundred newborn calves likely would have been in the path of the fire, Romans said, and possibly unable to flee the flames.

Some of the Romans family’s purebred Charolais deliver their calves in late winter and early spring, as is typical in the region, but part of the herd is bred to calve in late summer.

And that’s the part of the herd — about 175 cows — that was grazing on a Bureau of Land Management allotment when the Indian Creek Fire started late on the morning of Aug. 16 just north of Highway 20 between Juntura and Vale. That’s about 30 miles southwest of the Romans Ranch.

Westfall is an unincorporated town about 10 miles north of Harper, which is near Highway 20 about 22 miles west of Vale.

Romans said he was home on Aug. 16 when he saw smoke billowing.

He said he drove to the area that evening and by then the fire, the cause of which is still under investigation, had burned onto part of the allotment where his family’s cattle were grazing.

Romans said the cattle usually use that allotment from July 1 through Nov. 1.

He said he wasn’t overly concerned, in part because the cattle were in a pasture with lots of rocky areas, but not much heavy fuel to sustain a fast-moving fire that could threaten the animals.

Romans said he and other family members spent much of the first half of that week, Aug. 17 to 19, helping to fight the fire to try to protect unburned parts of the allotment.

Romans said he and other relatives were busy on Aug. 20 trying to protect private land that’s part of the Becker Ranch.

Finally on Aug. 21, he started tracking down his family’s Charolais, knowing they would start dropping calves soon and that the newborns would be less able to flee should the fire start spreading rapidly.

That day he found about 40 cows congregated at a reservoir, with the fire burning all around them.

Fortunately, the fuel was scanty, and a helicopter dropped a bucket of water on the hottest spot to protect the cattle, Romans said.

He drove the cows into a nearby canyon away from the fire, but with one exception.

At that point only one cow had given birth, and the female calf wasn’t old enough to go with the rest of the herd, Romans said.

The next day, Aug. 22, Romans said he returned to the canyon and found all the cows — including the one that had the calf.

But the calf wasn’t there.

“Typically, when a cow leaves a calf she’ll go back and grab it,” Romans said.

He notified fire officials that the calf was missing.

A day later, firefighters from the BLM’s Snake River Valley crew No. 7, based in Vale, found the calf near the reservoir where the herd had gathered two days before.

The firefighters coaxed the calf and brought her to Russell Hamilton, an incident fire operations trainee from Spokane, Wash., who is part of the multiagency team that’s managing the 48,000-acre Indian Creek fire. The blaze was 40% contained as of Wednesday morning, Aug. 26. Investigators concluded the fire was human-caused, but they have not identified a suspect.

Hamilton hefted the calf into the front seat of his pickup truck and brought the animal back to the herd.

His father, Bill Romans, and daughter, Mollie, later found that the cow and calf had been reunited.

Jeff Romans said he actually had met Hamilton a few days before, while helping to build a firebreak.

Romans said he had a great appreciation for fire crews even before they rescued his family’s calf.

“We as ranchers in the Westfall Valley are thankful for our local BLM firefighters and the way they look out for our livelihood,” he said. “Not everyone would have cared about that one calf.”