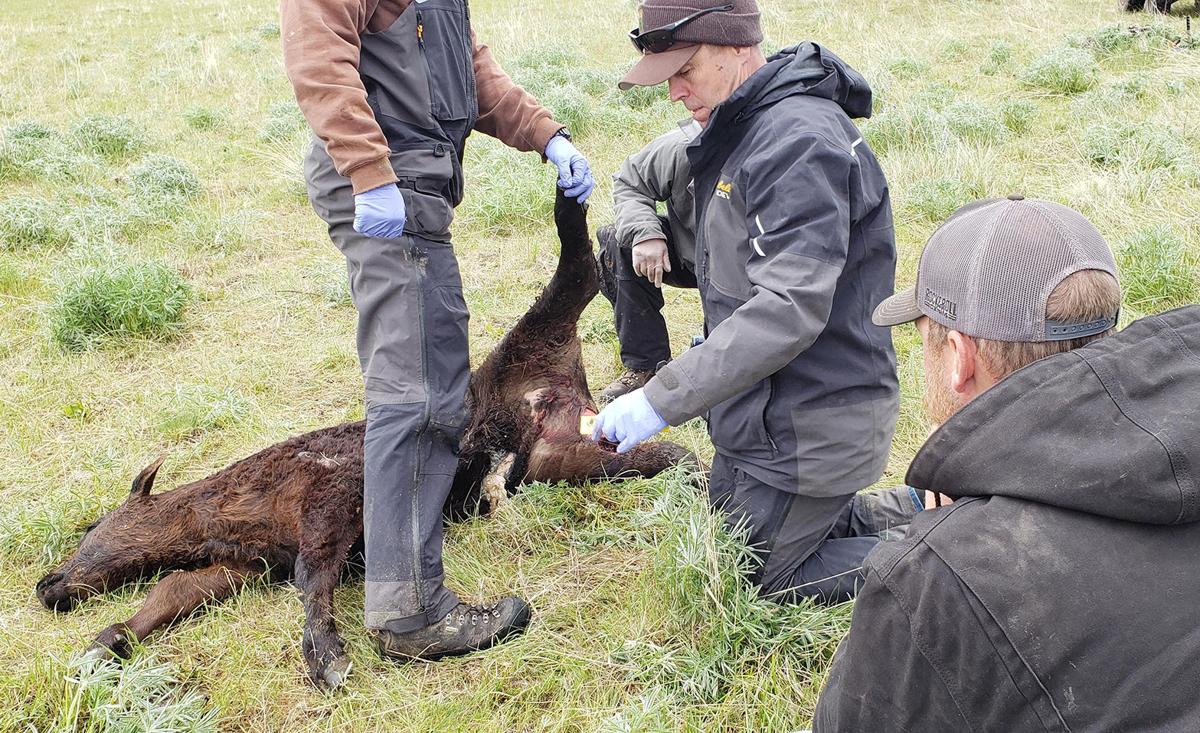 District biologists for the Oregon Department of Fish and Wildlife in Pendleton investigated whether this calf was killed by wolves May 13 on tribal land in the Blue Mountains. The incident was later confirmed. 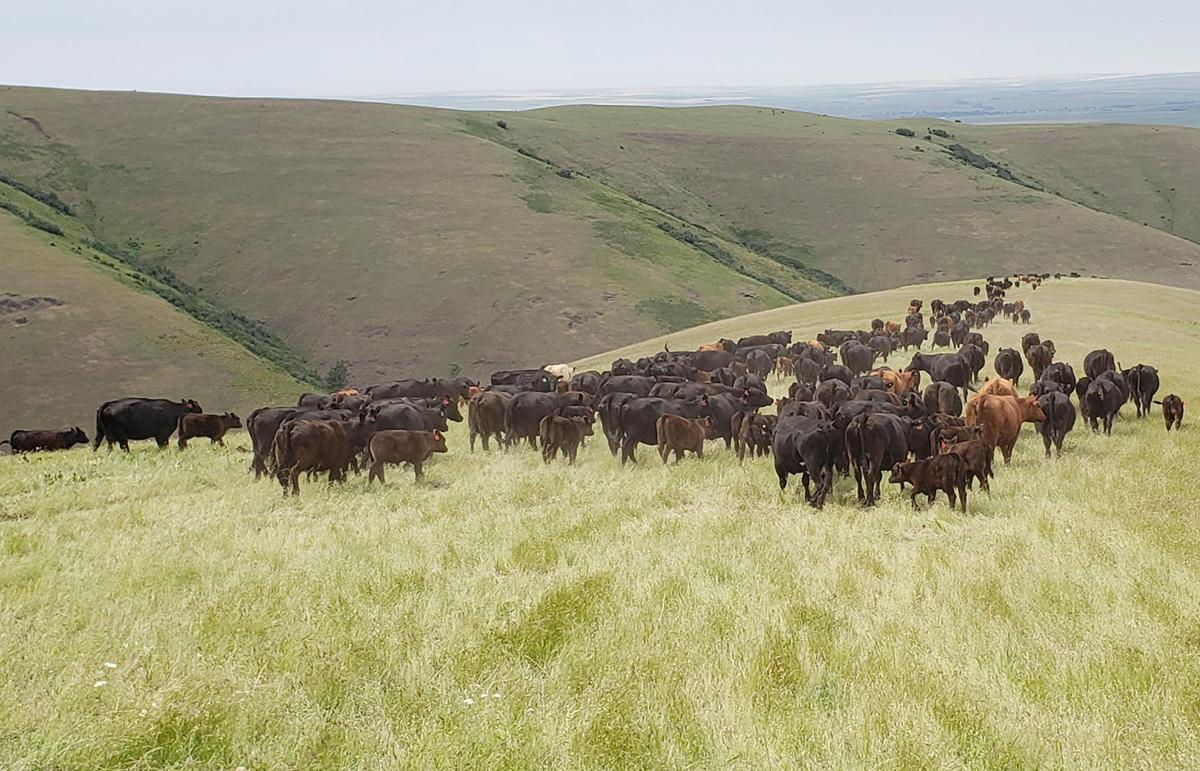 Ranchers Cassie Miller and John Petersen graze several hundred cows on a spring allotment in the Blue Mountains east of Pendleton, owned by the Confederated Tribes of the Umatilla Indian Reservation.

District biologists for the Oregon Department of Fish and Wildlife in Pendleton investigated whether this calf was killed by wolves May 13 on tribal land in the Blue Mountains. The incident was later confirmed.

Ranchers Cassie Miller and John Petersen graze several hundred cows on a spring allotment in the Blue Mountains east of Pendleton, owned by the Confederated Tribes of the Umatilla Indian Reservation.

PENDLETON — A ranching couple in Northeast Oregon says they are frustrated and heartbroken after struggling to protect their cattle from wolves earlier this spring.

Cassie Miller and her husband, John Petersen, graze several hundred mother cows and their calves on roughly 10,000 acres of spring pasture owned by the Confederated Tribes of the Umatilla Indian Reservation in the Blue Mountains east of Pendleton.

Most of Oregon’s 158 documented wolves live in the state’s northeast corner, including the Umatilla Indian Reservation.

Despite camping out with the herd at night, hiring a range rider during the day and maintaining a human presence around the clock, Miller said they are 19 calves short after moving the livestock over to their summer range July 1.

Miller, a fifth-generation rancher from Union, said they have only been able to find six dead calves on the large allotment — a mix of grassy meadows and timber stringers. The Oregon Department of Fish and Wildlife investigated each case, but could only confirm one of the calves was killed by wolves from the nearby Mount Emily pack on May 13.

Two others were ruled “probable” wolf attacks, and three were “possible/unknown,” since most of the remains had already been eaten by scavengers.

While biologists did find evidence of wolves in the area — such as tracks, scat and coordinates for at least one wolf fitted with a GPS collar in February — they cannot know for sure what killed the livestock unless there is enough of the carcass left intact, leaving ranchers like Miller in a difficult position.

“Definitely, we should have had more confirmed depredations,” she said. “That is why producers are getting so upset.”

Miller said she does not blame local wildlife biologists or tribal land managers, but rather the criteria they must follow for confirming wolf kills.

“They’re following the protocol lined out for them,” Miller said. “They were empathetic. They said we definitely have a problem here.”

Greg Rimbach, the district wildlife biologist for ODFW in Pendleton, said he sympathizes with ranchers who must spend more time and money hazing wolves, but believes the agency is doing the best it can with timely, evidence-based investigations.

“We go where the evidence leads us,” Rimbach said. “That has caused some concern or anguish with livestock producers. I don’t blame them at all.”

Except for one confirmed depredation, Rimbach said there was so little left of these calves they could not identify pre-mortem injuries. The Blue Mountains are ripe with predators and scavengers, from birds to bears and cougars. It does not take long before a carcass is mostly, if not entirely, consumed.

In 2017, Miller and Petersen received a five-year grazing permit from the tribes. Their allotment is divided into two sections on either side of a steep canyon, where the cows are rotated on an annual basis. The east side of the permit, which runs up to an area known as Telephone Ride, is where the couple has run into trouble.

Two years ago, they came out 23 calves short. Miller said they did not realize the extent of the situation until it was already too late. This spring, they found their first two dead calves on back-to-back days, April 30 and May 1, and immediately got to work.

For three weeks straight, Miller said they camped out an average of five nights a week with the herd, firing gun blasts to scare away wolves. The tribes also hired a range rider to help patrol the ridge.

Yet Miller said despite their best efforts, the deaths did not stop. The couple found more dead calves on May 12, 13, 24 and 26. Miller said they may never find the other missing animals.

Gordy Schumacher, the range, agriculture and forestry program manager for the tribes, acknowledged they need to come up with a better plan to mitigate wolf attacks on Telephone Ridge. He pondered additional non-lethal deterrents, such as fladry and flashing lights, though any proposal would need to be approved by the tribes’ Fish and Wildlife Commission.

Oregon does allow for killing wolves that prey on livestock at least two times in nine months, defined as “chronic depredation.” But Schumacher questioned whether killing wolves would only encourage other packs to move into the area, potentially making the situation worse.

“You’ve got to be real careful with how you do this,” Schumacher said. “Once you have a group of coyotes or wolves you can live with, you leave them alone.”

Around the same time, Rimbach said OR-85, a male wolf collared by ODFW in February, abruptly left the area and wandered south near the John Day River.

“All of a sudden, we got no more indications from the livestock producer or the tribes that wolves were still there,” he said.

Finding a solution is critical for Miller, who said the deaths of calves impact them both financially and emotionally.

“If you talk to ranchers, they’re all going to tell you the absolute most horrific part of this is the feeling your animals have been put in this situation,” she said. “They’re important to us.”

Northeast Oregon ranchers Cassie Miller and John Petersen found six dead calves this spring on their tribal grazing allotment in the Blue Mountains east of Pendleton. The Oregon Department of Fish and Wildlife investigated each case for possible wolf depredation, and made the following rulings: