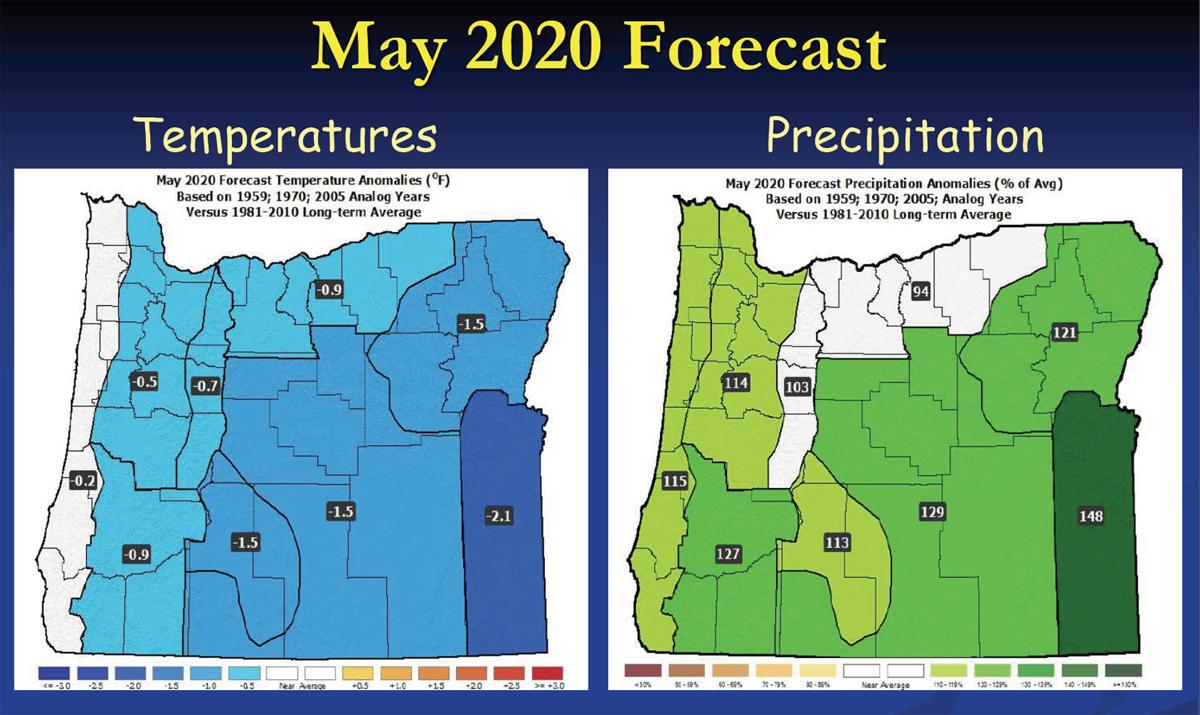 The Oregon Dept. of Agriculture forecast for May suggests cool temperatures and 121% of normal precipitation for Wallowa, Union, and Baker Counties. 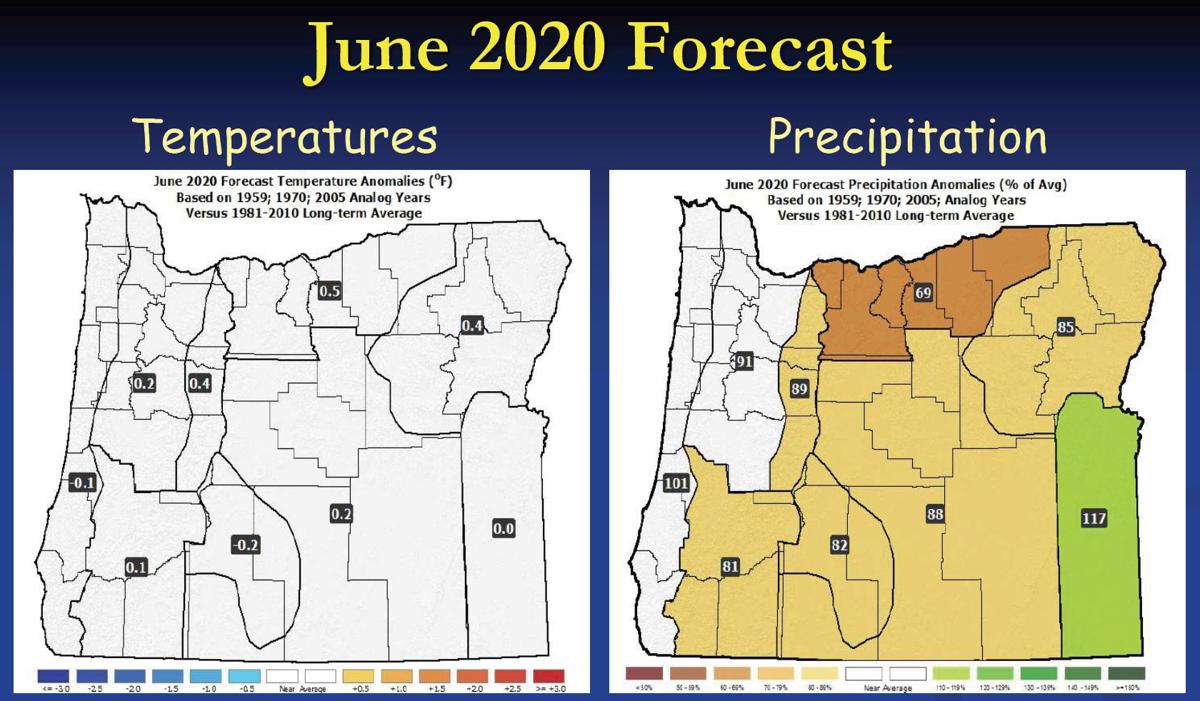 The Oregon Dept. of Agriculture forecast for June suggests normal temperatures and slightly below normal precipitation for Wallowa, Union, and Baker Counties. 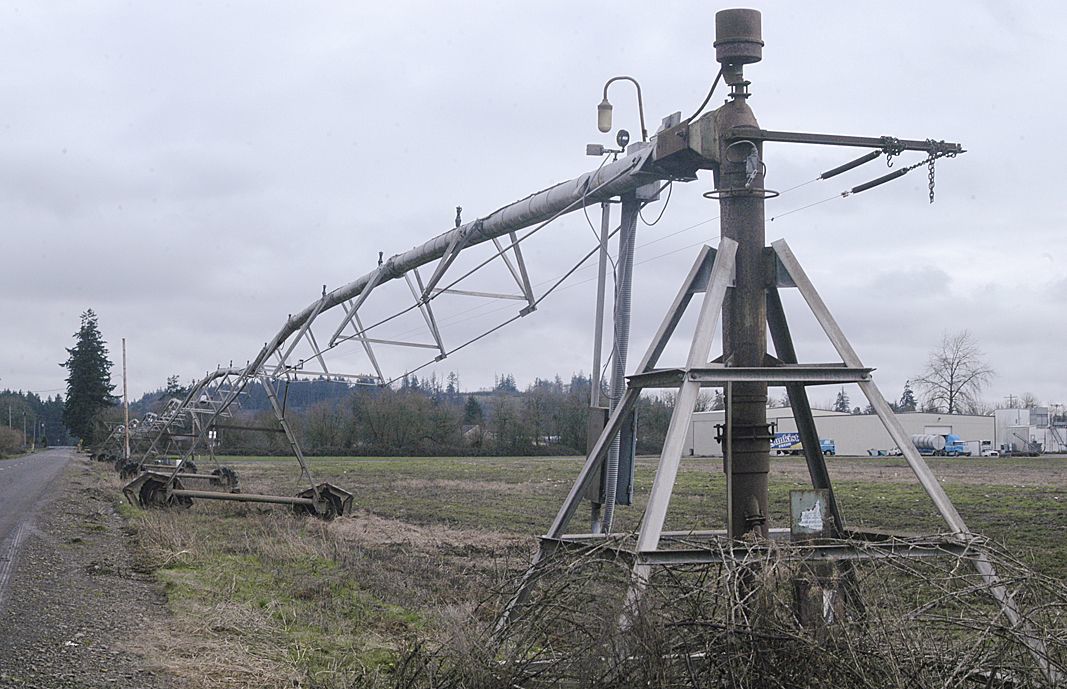 Oregon's snowpack has rebounded this spring but how fast it melts will impact the amount of water available for irrigation this summer.

The Oregon Dept. of Agriculture forecast for May suggests cool temperatures and 121% of normal precipitation for Wallowa, Union, and Baker Counties.

The Oregon Dept. of Agriculture forecast for June suggests normal temperatures and slightly below normal precipitation for Wallowa, Union, and Baker Counties.

Oregon's snowpack has rebounded this spring but how fast it melts will impact the amount of water available for irrigation this summer.

PORTLAND — An erratic winter for Oregon's mountain snowpack appears to be ending on a high note.

Recent snowstorms have lifted the state's overall average snowpack to 109% of normal as of April 8, compared to 91% of normal at the beginning of March, according to the USDA Natural Resources Conservation Service.

Scott Oviatt, snow survey supervisor for NRCS Oregon, said snowpack typically peaks in April and May across the state. "The key," he said, "is going to be how quickly or rapidly that snowmelt runs off."

"We don't want it to come out in a sudden flush, with warm temperatures or rain on snow," Oviatt said.

That sudden flush was felt especially hard earlier this year, when warmer weather and rain-on-snow contributed to massive flooding on the Umatilla and Walla Walla rivers in northeast Oregon and southeast Washington, damaging farms and homes.

With so much snow at higher elevations in the region, if the remaining snowmelt happens more slowly and gradually, it could be a boon for irrigators.

Meanwhile, Oregon Dept. of Agriculture long term forecasts by meteorologist Pete Parsons call for a cool wet May in the Snake, Powder, Imanha and Burnt River basis, with 121% of precipitation and temperatures 1.5 degrees F below normal. Conditions should return to more normal and possibly drier early summer weather in June, with 85% of normal precipitation and temperatures 0.4 degrees warmer than normal across the same region according to Parson's prognostication.

Despite relatively strong snowpack, the optimism is tempered by lower-than-normal total precipitation, Oviatt said, which remains at 80% statewide.

The driest areas are in southwest Oregon, where the Rogue and Umpqua basins are at 69% of average precipitation and the Klamath Basin is at 68%. Gov. Kate Brown has already declared a drought emergency in Klamath County.

Stream flows are expected to range between 42% to 90% in the region, and average to above-average in basins farther north.

Reservoir storage, meanwhile, is a mixed bag around the state. As of April 1, Clear Lake in the Hood, Sandy and Lower Deschutes basins was storing less than half the normal amount of water for this time of year. Reservoirs in the Rogue and Umpqua were also filling well behind schedule at 71% of average.

Elsewhere, reservoirs range between 80% and 116% of normal, and up to 121% at Lake Owyhee in southeast Oregon.

There is still time for areas facing water shortages to recover, with a cooler spring and timely rains, Oviatt said.