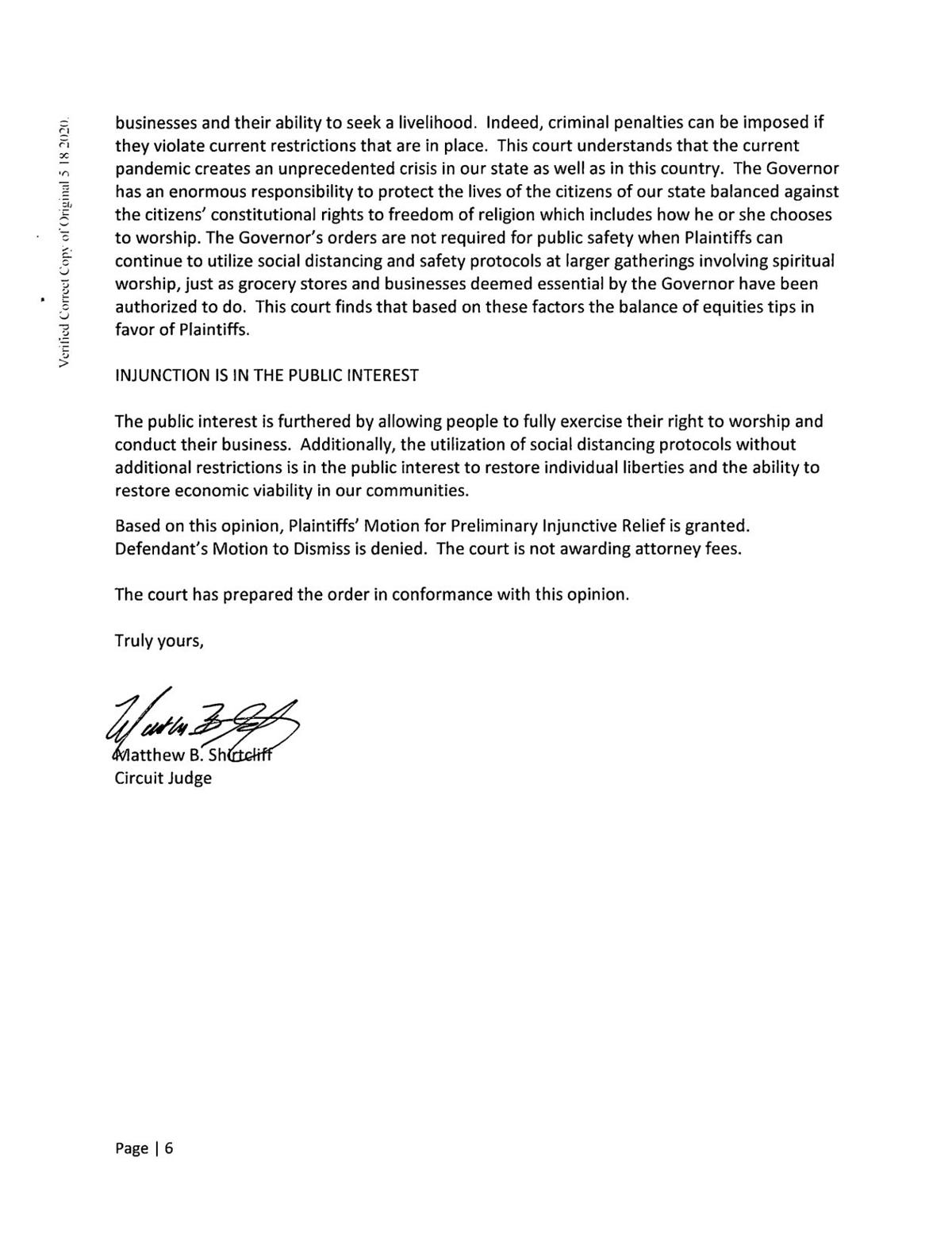 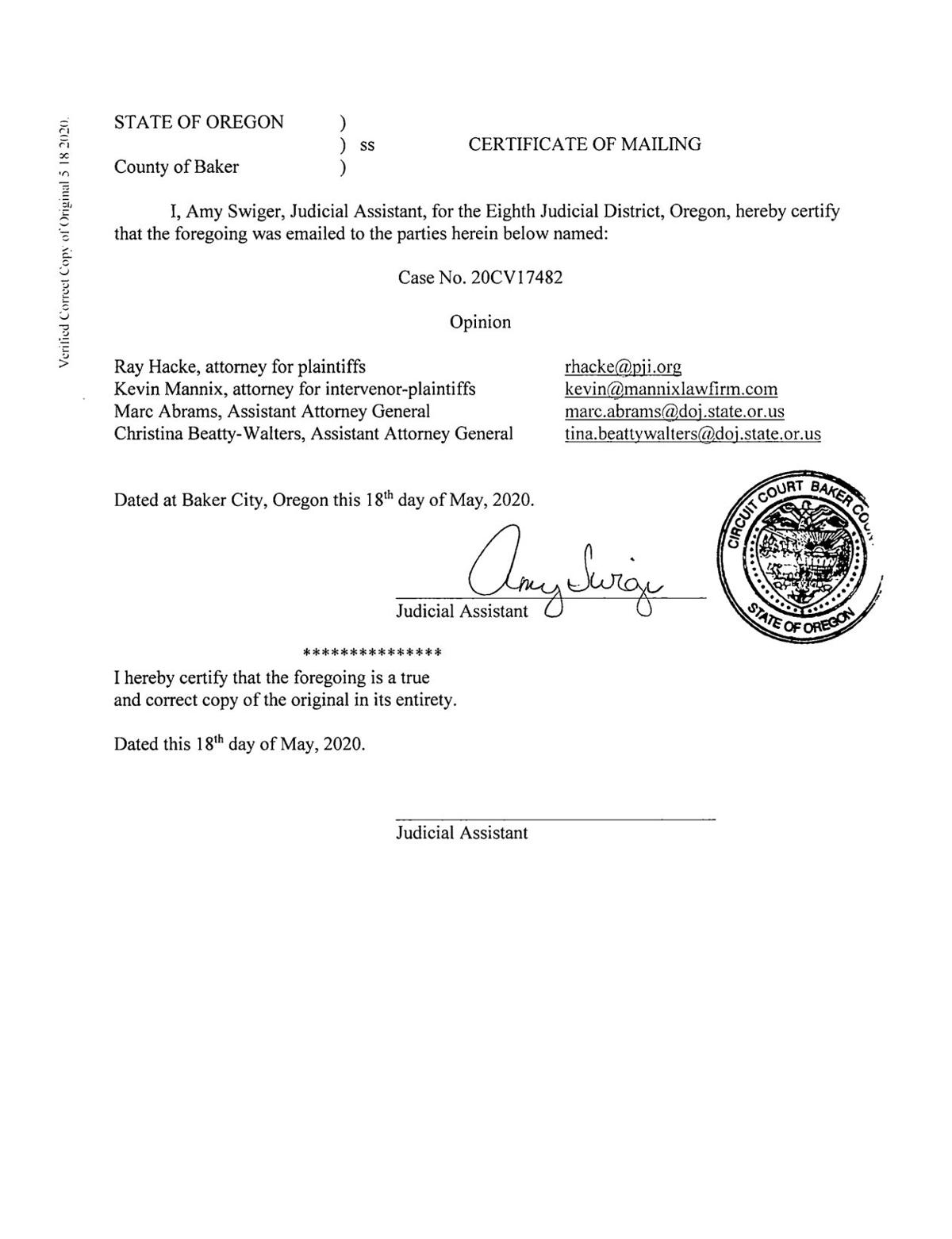 The Oregon Supreme Court ruled late Monday that Gov. Kate Brown’s executive orders regarding the coronavirus pandemic will stand statewide until the court hears arguments in the case following a Baker County judge’s ruling earlier Monday that the orders were “null and void.”

“Following swift action by the Oregon Supreme Court, my emergency orders to protect the health and safety of Oregonians will remain in effect statewide while the court hears arguments in this lawsuit,” Brown said in a statement Monday night about the court’s emergency ruling.

Baker County Circuit Court Judge Matthew B. Shirtcliff had earlier in the day ruled Brown had exceeded her authority by restricting activities, including church services and businesses, for longer than the 28 days the governor is authorized under a state law.

He declared all executive orders that Oregon Gov. Kate Brown has issued related to the coronavirus pandemic as “null and void.”

Brown had exceeded her authority by restricting activities, including church services and businesses, for longer than the 28 days the governor is authorized under a state law related to public health emergencies he said.

Judge Shirtcliff granted a preliminary injunction blocking enforcement each of the more than 10 executive orders the governor has issued since March 8.

Shirtcliff’s decision applies to the entire state. He ruled on the motions because the lawsuit challenging the duration of the governor’s legal authority was filed May 6 in Baker County Circuit Court.

Elkhorn Baptist Church of Baker City is the lead plaintiff in the lawsuit, which was filed by Salem attorney Ray Hacke of the Pacific Justice Institute, a nonprofit that defends religious liberty.

Bill Harvey, chairman of the Baker County Board of Commissioners, filed as an intervenor-plaintiff in the case as an individual rather than in his capacity as an elected official.

Harvey, who attended a 20-minute hearing Monday morning at the Baker County Courthouse during which Shirtcliff announced his decision, said after the hearing that “this is what we were seeking.”

“Our emphasis was that she (Brown) overstepped her bounds,” Harvey said.

Two attorneys from the Oregon Department of Justice who are representing Brown asked Shirtcliff to either issue a stay, meaning the preliminary injunction wouldn’t take effect immediately, or to wait 48 hours before entering his decision into the record, which would have the same effect.

Shirtcliff denied both requests, saying he would enter his decision immediately.

The governor’s lawyers, Marc Abrams and Christina Beatty-Walters, sought an immediate review of Shirtcliff’s decision by the Oregon Supreme Court, with a goal of overturning his ruling.

Abrams said there is evidence that measures in the governor’s executive orders have been effective at curbing the spread of the coronavirus, and that Shirtcliff should delay the injunction as a result.

But Hacke countered that the “issue is not whether it’s working. It’s whether she has exceeded the limits of her authority.”

Since Shirtcliff has agreed that Brown has exceeded that authority, Hacke argued, delaying the injunction would in effect render the injunction moot.

In his written decision, the judge compared grocery stores and other businesses that have remained open, with social distancing guidelines, to churches, writing that churches can use the same precautions during worship services that involve more than 25 people, which has been the limit under the governor’s executive orders.

“Today’s ruling from the Baker County Circuit Court will be appealed to the Oregon Supreme Court within hours to keep my emergency orders in effect,” Brown said in a press release. “This will ensure we can continue to safeguard the health of all Oregonians … while the legal process moves forward.”

Rosenblum said: “With all respect, I believe the trial court’s grant of a preliminary injunction is legally incorrect. We will argue that the judge erred in his construction of the relevant statutes and that he abused his discretion in issuing the preliminary injunction. We will also be asking for an immediate stay of his order.”

In granting the plaintiffs’ motion for a preliminary injunction, Shirtcliff concluded that Brown, by citing a certain state law in some of her executive orders since her original emergency declaration March 8, in effect placed a 28-day limit on the state’s enforcement of those orders.

The law gives the governor a variety of powers, including the authority to “control or limit entry into, exit from, movement within and the occupancy of premises in any public area...”

Although Brown invoked a different law — ORS 401.165 — when she initially declared an emergency, Shirtcliff wrote that 401.165 “does not grant the Governor power directly over the movement of citizens and gatherings.”

ORS 401.165 also does not include any time limits on the duration of the emergency. Brown has subsequently extended the emergency declaration through July 6.

The crux of the legal dispute involves the relationship between the two laws the governor has invoked — 401.165 and 433.441.

Brown’s attorneys agued in a May 14 hearing that because the governor cited 401.165 in the emergency declaration, that law, which has no time limits, is the controlling statute.

But Hacke argued — and Shirtcliff agreed — that the governor, by repeatedly citing ORS 433.441 in her executive orders, made those orders subject to the 28-day time limit allowed under that law for public health emergencies.

Moreover, Shirtcliff wrote in his decision that Brown, in order to issue executive orders that restrict residents’ movements and the size of their gatherings, had to involve 433.441 because 401.165 doesn’t give her that authority.

“This court finds that when the Governor utilized the provisions of ORS 433.441 in her executive order, she triggered all the provisions of ORS 433.441 including the time restrictions,” the judge wrote. “By doing so, the executive order became null and void beyond the maximum 28-day time period allowed by the statute. Moreover, by not complying with (the) timelines, the Governor’s subsequent Executive Orders 20-05 through 20-25 are also null and void.”

In addressing the potential conflict between the two laws — one with no time limit and one with a 28-day limit — Shirtcliff wrote that “the statutes are to be read to work together with the more specific statute governing.”

Shirtcliff concluded that ORS 433.441 — the public health emergency law with the 28-day limit — prevails because it is more specific in that it deals with a particular type of emergency (public health), because it gives the governor specific authority, in this case the ability to control citizens’ movements and gatherings, and because it includes a time limit.

In their lawsuit the plaintiffs also cited an amendment to the Oregon Constitution — Article X-A — that Oregon voters added in a ballot measure in November 2012.

That section allows the governor to declare a “catastrophic disaster,” including in the event of a pandemic, and it sets a 30-day limit on the declaration unless the Legislature agrees to extend it.

Shirtcliff agreed with the governor’s lawyers that Article X-A doesn’t apply in this case because Brown has not cited that article in her emergency declaration or subsequent executive orders.