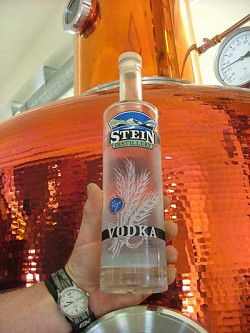 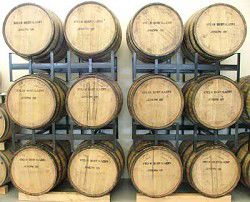 <I>Elane Dickenson/Chieftain</I><BR>About 30 barrels full of fine whiskey and bourbon ages at Stein Distillery, and won't be ready for consumption for at least two years.

<I>Elane Dickenson/Chieftain</I><BR>About 30 barrels full of fine whiskey and bourbon ages at Stein Distillery, and won't be ready for consumption for at least two years.

A bright coppery red still - with a patina that changes color with heat just like bronze sculptures - is now producing high quality liquor in the new Stein Distillery on the north end of Main Street in Joseph.

Ground was broken on the 6,000-square foot building that houses the distillery two yezars ago, but delays in equipment delivery and endless paperwork with state and federal agencies postponed the planned startup by at least six months.

But the waiting is over, now, and long-time contractor and current on-site manager Dan Stein is pleased with the system.

"The still is not only considered the Cadillac of stills, but it's a work of art too," Stein said. The eye-catching 165-gallon copper fermenting system was manufactured in Germany.

The business is owned by Stein's son and daughter-in-law, Austin and Heather. Although the couple lives in the Portland area, where both work at computer-related jobs to help finance the business, they hope to move back to Wallowa County to live in a few years.

For now, they commute about once a month to engage in hands-on work in the distillery.

So far the only other on-site employee is Doyle Connall, but the distillery plans to hire at least one more this summer.

The Steins are already promoting their first liquor on the market - top-shelf rye vodka - at tastings in liquor stores in the western part of the state. Locally, Stein Distillery vodka is available at Anton's in Joseph and the Enterprise Liquor Store.

Vodka came out first because vodka doesn't require aging like other liquors the distillery is also making. It will be at least two years before Stein's rye whiskey and bourbon are ready.

The whiskey is stored in white oak barrels, about 30 so far, which are charred on the inside to flavor and mellow the alcohol.

Starting in early May, the distillery will open its tasting room and visitors can belly up to the 30-foot long bar to sample two free 1/4-ounce tastes of Stein rye vodka or several types of vodka cordials, including raspberry, blackberry and huckleberry.

The raspberries were raised by Tom and Treva Crooks on the edge of Joseph, the blackberries come mainly from the Willamette Valley and the huckleberries from both Mt. Adams and wild patches in Wallowa County.

The Steins are still waiting for a cordial label to be approved by federal Alcohol and Tobacco Trade and Tax Bureau (TTB) before its cordials hit the liquor store shelves.

Testing is done mainly by smell, and any tasting is in very small samples. Word coming back from both local and state-wide customers is very positive so far.

"A lot of people are really liking it," Dan Stein said, noting that because of the small batches and personal attention, their hand-crafted vodka is top quality and higher priced than most brands, in the $30 a fifth range.

The younger Steins say that when they hold a tasting event, the Stein Distillery vodka supply on hand always sells out.

According to the Steins, the distillery is unique in a number of ways. "It's completely family-owned and operated, and we grow our own grain. Everything is done by hand," Austin Stein said. "It's the only distillery in Eastern Oregon." He said that most distilleries in the state are housed in old warehouse buildings, while theirs was custom built by the family for the purpose of being a distillery.

Water is provided by a new well on the distillery property.

Originally, the Steins had hoped to start producing by the end of the summer in 2008, but every step along the way took more time than they'd anticipated, including the shipment of the still from Germany.

The distillery was finally fired up for testing at the end of August 2009, with commercial vodka production started in October.

"It's finally coming together," Dan Stein said. "It took us a little longer to get running, because we wanted to do it right," Heather Stein added.