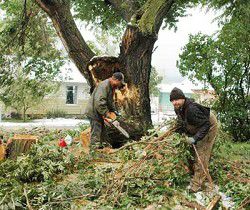 <I>Kathleen Ellyn/Chieftain</I><BR>The sound of chain saws could be heard Sunday morning in Joseph and Enterprise as homeowners cleared fallen branches. Here, Chad Savage (with saw) and Joshua Shoffner, both of Enterprise, helped clear a huge downed limb at a home in Enterprise after the storm abated. 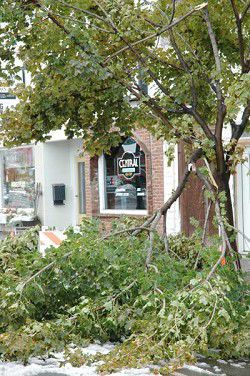 <I>Kathleen Ellyn/Chieftain</I><BR>The sound of chain saws could be heard Sunday morning in Joseph and Enterprise as homeowners cleared fallen branches. Here, Chad Savage (with saw) and Joshua Shoffner, both of Enterprise, helped clear a huge downed limb at a home in Enterprise after the storm abated.

Police dispatch phones began ringing just after 5 p.m. Saturday, Oct. 3 as the first snowstorm of the season hit Wallowa County: powerlines down, trees in the road, slick conditions and concerns about overdue fishermen and hikers. Overnight, the storm dumped four to six inches of wet snow in Enterprise and Joseph and the Imnaha Highway lived up to its nasty-driving reputation. Snowfall peaked at 20 inches on Mt. Howard on Oct. 5 according to the SNOTEL website.

There were several power outages, cable TV service was interrupted and trees still in full foliage caught the heavy snow on their leaves and branches snapped.

"We had a lot of crushed trees, smashed trees, just a lot of them," said Wallowa County Undersheriff Steve Rogers.

Hunters reportedly came back from day hunts to find their tents torn and collapsed under the weight of snow. Some spent the evening hunkered in campers playing pinochle or attempted to four-wheel out for a day of desultory shopping in Joseph as they waited for better hunting weather.

Some of the attempts to get out of camp failed as hunters bucked 14 inches of snow on the 39 Road.

"We had people stuck in the ditch, off the road, stuck up on Salt Creek Summit," Rogers said. "We closed the 39 Road for a few hours while we got all those vehicles unstuck."

"It was the worst snow I've seen in my life and I've lived here 44 years," said Marty Thompson of Enterprise who had gone up the 39 Road with her fiancé Saturday to get wood. "It took us all day to get a load of wood down," she said. "It was horrible."

Some reports put the depth of the snow at Lick Creek at 19 inches.

Snow melted fast and Oregon State Police predicted that most roads would be passable with four-wheel drive by Tuesday morning.

The US Forest service did an emergency plow on the 39 Road. "It's not typical for us to do that this soon," said District Ranger Ken Gebhardt, "but we heard all those people were stuck up there and made the decision."

Two motorcyclists from San Diego and Grants Pass who had wheeled into Enterprise in lovely fall weather found themselves suddenly stranded and learned about Wallowa County hospitality. TW Bronze owner Tim Parks, who ran into the motorcyclists Sunday morning while breakfasting at Lear's Main Street Pub in Enterprise, helped them get in touch with D.J. Jannuzzi for a U-Haul truck. Jannuzzi met them on a Sunday after hours and Parks helped the motorcylists secure their motorcycles and saw them on their way.

The Enterprise City Hall and Fire Hall roof miraculously withstood the snow, but the ceiling at Cloud Nine Bakery and Café on SE First Street in Enterprise didn't. As the snow melted, leaks in the roof soaked the ceiling and when owners Christina and Jeremiah Moffit came home from hunting camp at about 3 p.m. Sunday, they found themselves wading through water inside their business.

"I opened the door and when I stepped in there was a big splash," recalled Christina. "Part of the ceiling had fallen down. I went back into the kitchen and I was splashing all the way through. Water was dripping down the walls and all over."

The Moffits got their insurance company up for an estimate on damages, but inspection of the roof is still ongoing. The failure of the waterproofing came as a shock, Christina said. "We had no warning. They're thinking that the heavy hail (on Aug. 29) may have started damage and the heavy snow finished it."

In any case, as Moffit Brothers and Wellens & Farwell Construction crews carry out sodden ceiling, no donuts are being fried.

No donuts for weeks.

"It'll be a while," said Christina.

Most damage across the county was minor, according to insurance agents.

Ava Bridges of Les Bridges Agency, Farmers Insurance, said the insurance agency had "a couple of big claims and some personal line claims for auto and tree damage."

Wheatland Insurance reported "not too many claims" because of the snowfall, mostly homeowner claims for tree damage.