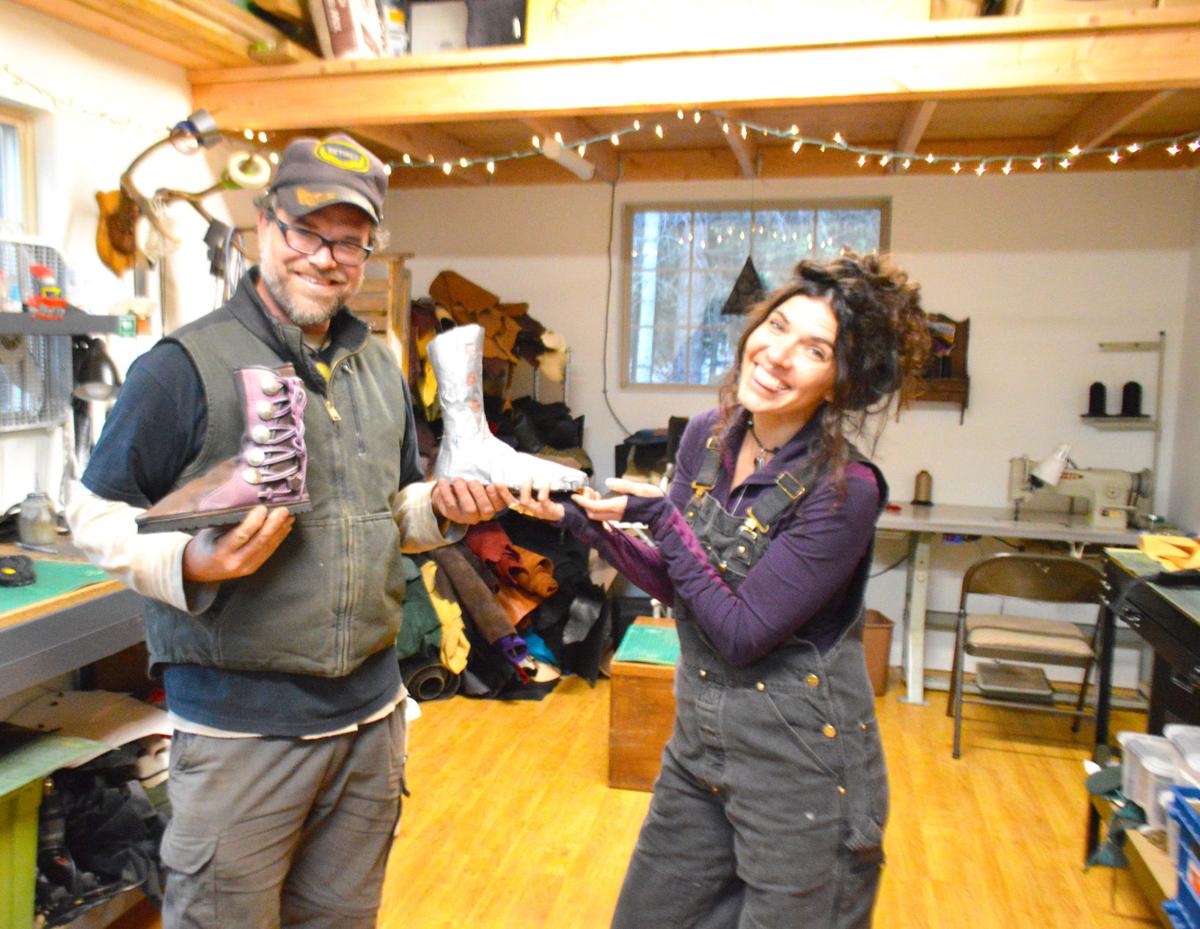 Moccasin/shoemakers Dustin Lyons and Tera Ptacek hold up one of their custom footwear items and a mold. The couple make a living producing footwear from a shop on their property. 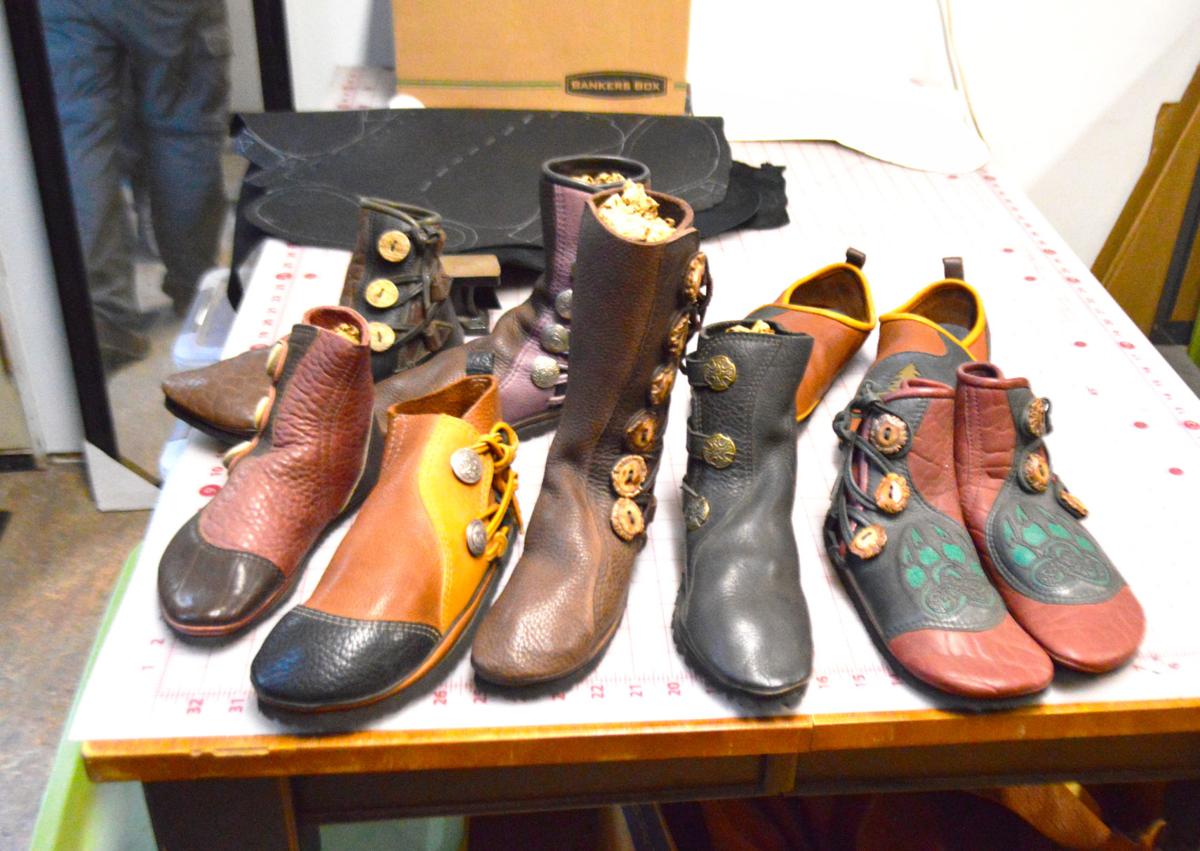 Just a few of the models of moccasins/footwear made by Alkahest Moccasins and Leathercrafts. The business is owned by Dustin Lyons and Tera Ptacek of Joseph. 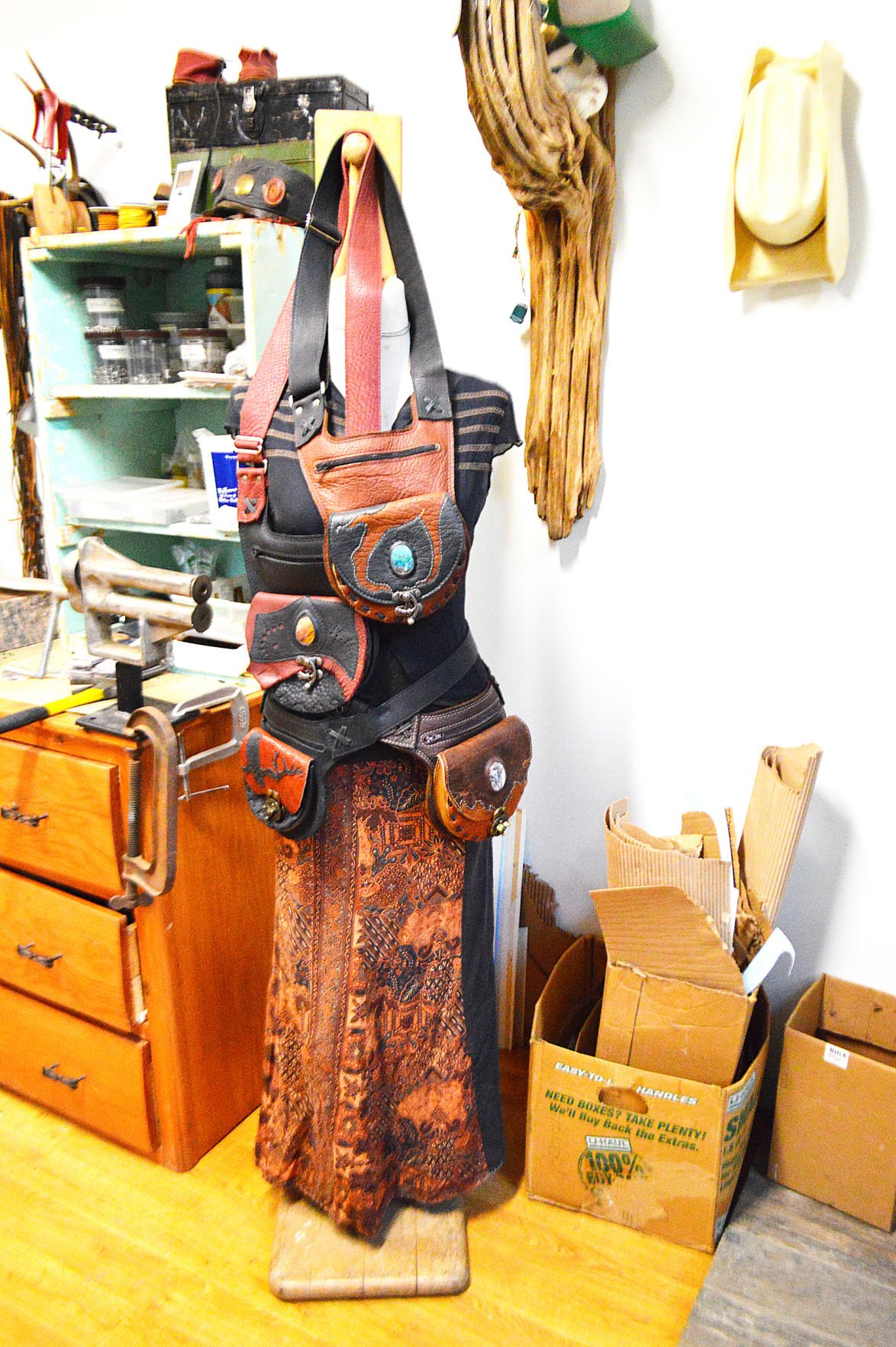 Just a few of the shoulder and hip bags produced by Alkahest Moccasins and Leathercrafts. The enterprise is owned Dustin Lyons and Tera Ptacek of Joseph.

Moccasin/shoemakers Dustin Lyons and Tera Ptacek hold up one of their custom footwear items and a mold. The couple make a living producing footwear from a shop on their property.

Just a few of the models of moccasins/footwear made by Alkahest Moccasins and Leathercrafts. The business is owned by Dustin Lyons and Tera Ptacek of Joseph.

Just a few of the shoulder and hip bags produced by Alkahest Moccasins and Leathercrafts. The enterprise is owned Dustin Lyons and Tera Ptacek of Joseph.

Although cowboy boots appear to be the favorite footwear for most of Wallowa County, Alkahest Moccasins and Leathercrafts may change that. The business, owned by Dustin Lyons and Tera Ptacek, recently moved to Wallowa County to ply their craft in their workshop on the west side of Wallowa Lake. Alkahest is an alchemy term for a universal solvent.

“We tend to joke that our shoes are going to solve all your problems,” Ptacek said. “I also like to think of it as taking something raw and turning it into gold.”

The couple moved to the Wallowa Valley about a year ago from southwestern Oregon.

The two were big travelers before starting their business. They worked in Alaska during the summer and traveled in the winter. After one of their return trips to Alaska, they saw shoes similar to the ones they make now, but couldn’t afford them. The shoes made an impression, though. Two years later, when the couple thought of settling down, the shoe subject came up again and the couple moved to Ashland where a master bootmaker lived and the couple started taking classes at William Shanor and Julie Bonney’s school of shoemaking and design.

“Dustin and I had never sewn before, but after we made our first pair of shoes and from there, we said, ‘OK, let’s make this our business,’” Ptacek said. “That’s been eight years we’ve been doing this.”

The moccasins look entirely original and Ptacek said that one man originated the style in the late 1960s and it spread to four other makers who eventually passed the skill on to others.

Product is made from leather with a combination of machine and hand sewing. They generally work five days a week and six to eight hours a day. If demand is heavy, it’s seven days a week. The couple splits the shop time. “Being a couple, you have to make time to have your space,” Ptacek said. “I get mornings and he gets afternoons, but if it’s right before a show, we’re both in the shop.”

The couple doesn’t just work off of patterns, they relish doing custom work on the moccasins as well as their hip belts and purses. The design elements sported by their product is one of the most attractive things about them. The couple does many of the designs from their imaginations, such as their tree root motif. Nearly all of the designs are taken from nature.

“We’re willing to work with people,” Ptacek said. “What’s fun sometimes is when you come in the shop and there’s no timeline and you start cutting out leather pieces and putting them together and letting your creative mind take over. Things just start appearing.”

“Every pair of shoes is entirely customized,” Dustin said. “We make specific patterns for every single pair of shoes, so they’re going to fit you like a glove,” Lyons said. “You get to choose all your colors, your button design, the type of soles,” Ptacek added. The business offers a variety of soles, whether leather, or hard-core Vibram, and all the shoes are resoleable. “They can last a long time,” Tera said. The couple said that customers often show up with 30-year-old boots made by their mentor and still in good condition.

Ptacek showed her seven-year-old boots that she uses for hiking that look like they have years of wear left on them.

Because most of their wares are sold at craft shows, and the business is expanding, Lyons said the couple travels upwards of 15,000 miles per year. When the couple lived in Ashland, their territory included northern California and west of the Cascades up into Washington.

“Now we’ve expanded into Idaho, some Utah shows — we just did our first Nevada show and we still do California, Washington and Oregon,” he said. The couple attends 10-15 shows per year.

She added it was a joy to make custom shoes for people with foot issues who can’t find shoes that properly fit. “These will accommodate any foot issue,” Ptacek said. “We’ve even done shoes for diabetic people with partial feet,” Lyons added. “We can make two completely different left and right shoes.”

Some who come into the shop think the couple makes only “costume” style shoes, but the business is more versatile than that. The couple can make a shoe a teacher can wear in the classroom or even an end-of-the-world party shoe depending on what the customer wants. The business does not make cowboy boots because they are “lasted” footwear.

Lyons explained the difference between Alkahest footwear and off-the-shelf shoes.

“Common shoes are built on a last and in a generic form, which creates a cavity your foot will slide into,” he said. “Your foot has to conform to the generic cavity. Ours is more of a “second-skin” experience where the leather stretches and molds to and grabs your foot.”

The bags are available online, but the footwear is custom.

“We do need a foot-in-hand to do the casting,” Lyons said. He added that the couple crafts 60-80 shoes per year.

“We can’t do any more than that,” Lyons said. Shop hours on a shoe can vary from eight to 30 hours depending on the complexity and design. Knee-high boots are 30-hour projects, for example. The wait list is four months to a year depending on the time of year the product is ordered.

Lyons said his favorite article to make is boots, but both he and Ptacek’s favorite thing to do is helping people realize an individual design that means something personal to the customer. Both said that they love it when people contact them and make an appointment to come to the shop and get a casting done and talk about the products, which is the fulfillment of the couple’s dream.

“If you have a dream, it’s worth going for,” Ptacek said. “It’s something we had seen and had a passion for, and we tried and found out we can do it, and we’ve made a life out of it.”

The couple is happy living their nomadic lifestyle and making their custom products. In fact, they can’t see themselves ever doing anything else.

“We can’t imagine ever working for anyone else,” Ptacek said. “We feel utterly unemployable at this point,” Lyons added.

Alkahest Moccasins and Leathercraft can be contacted by phone: 509-240-0603, their Facebook page and by email: alkahestleather@yahoo.com