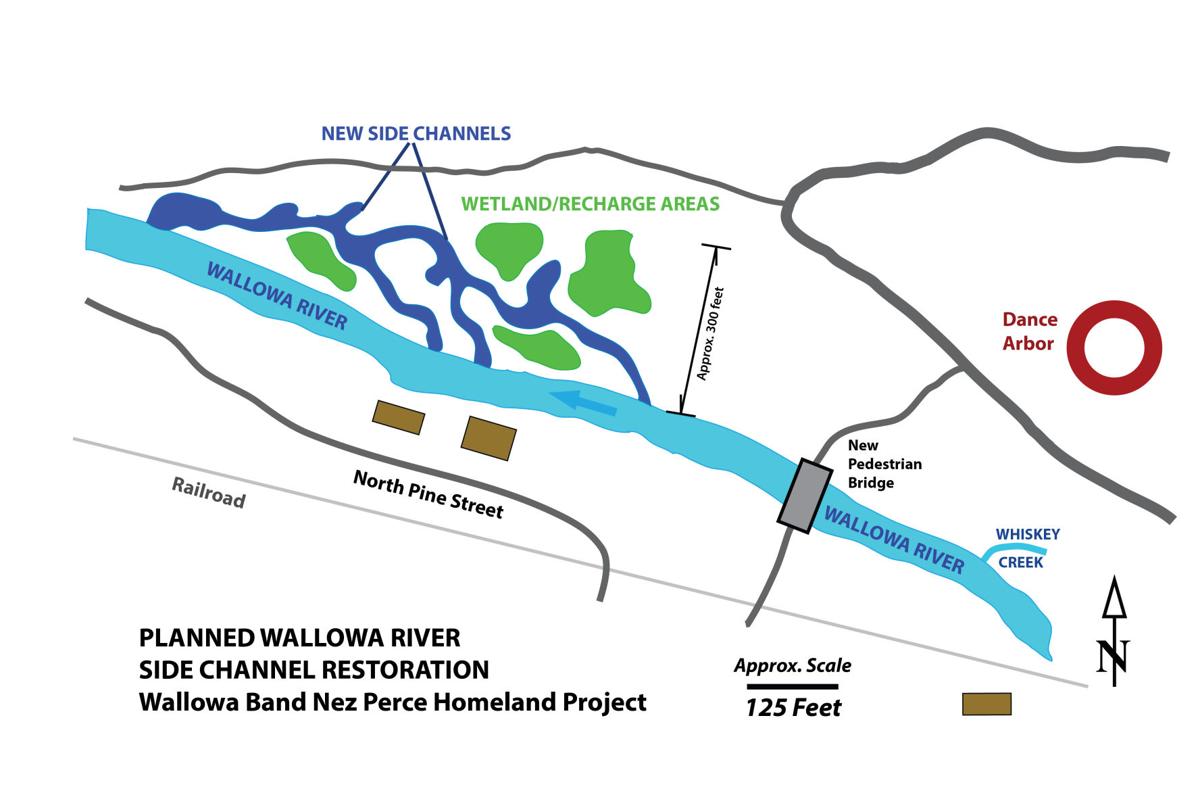 The long-planned Wallowa River Restoration at the Wallowa Band Nez Perce Homeland Project in Wallowa will include multiple small channels to allow juvenile fish to rear and overwinter, as well as restoration of wetland areas. The project is located near the west end of the property, and will not affect the dance arbor, longhouse, or roadways. Construction will begin this fall. 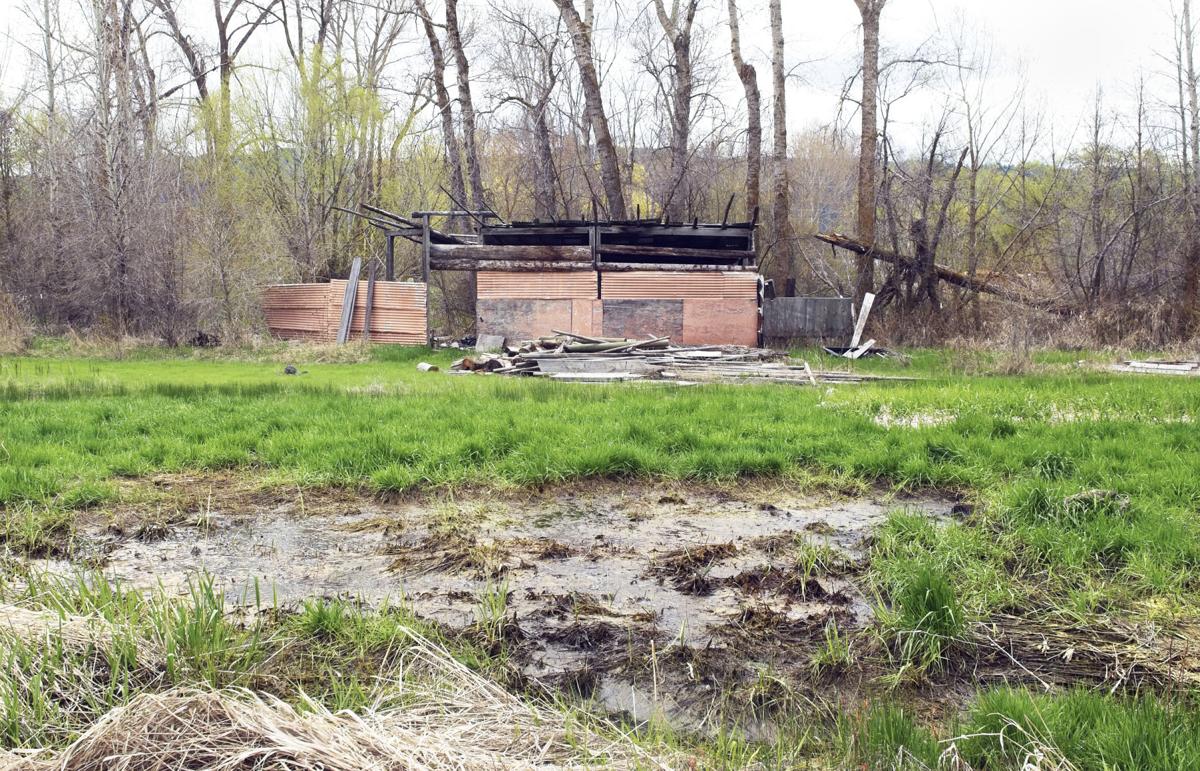 The new side channels will be constructed on the western end of the Tamkaliks property. Much of the ground is wet, and former wetland. The sweat lodge, seen here, will be relocated by Nez Perce volunteers who live on the Yakama Reservation.

The long-planned Wallowa River Restoration at the Wallowa Band Nez Perce Homeland Project in Wallowa will include multiple small channels to allow juvenile fish to rear and overwinter, as well as restoration of wetland areas. The project is located near the west end of the property, and will not affect the dance arbor, longhouse, or roadways. Construction will begin this fall.

The new side channels will be constructed on the western end of the Tamkaliks property. Much of the ground is wet, and former wetland. The sweat lodge, seen here, will be relocated by Nez Perce volunteers who live on the Yakama Reservation.

Work to transform the Wallowa River’s channel through a portion of the Wallowa Band Nez Perce Homeland Project into a haven for steelhead and Chinook salmon should finally begin late this fall, thanks to a grant from the Oregon Watershed Enhancement Board and other funders, including the Bonneville Power Administration. “This project is part of a long-term vision for river restoration,” said Coby Menton, Grande Ronde Model Watershed Project Coordinator for Wallowa County.

The project will improve spawning habitat for Chinook and steelhead in a 1,300-foot stretch of the Wallowa River adjacent to the Homeland Project’s 320 acres. Importantly, it will provide multiple small, cool water channels to shelter juvenile fish, and also restore native vegetation on former wetland areas north and west of the Tamkaliks dance arbor.

“We are really happy to be able to begin this project,” said Mary Hawkins, Director of the Wallowa Band Nez Perce Homeland Center in Wallowa. “It’s been a goal for a long time that started with Joe McCormack’s vision.”

The idea of a river restoration project began about a decade ago. The first concept was to reconstruct meanders in the main channel. But that would have impacted neighboring properties. So the Homeland Project considered a side channel that entered the property above what is now the Storie Street foot-bridge. But that location was too shallow to bedrock to create a suitable channel.

The new design, crafted by BPA, will create several small channels, all on the Homeland Project property, beginning about 400 feet downstream from the foot-bridge to the Homeland Project. They will carry water from the river, and return that flow to the river, producing relatively deep, narrow aquatic habitat for juvenile fish.

The multiple channels will create some characteristics of a braided stream. They include 12 pools that will be 3 — 5 feet deep to provide first class rearing and over-wintering habitat for juvenile Chinook salmon. This is important because juvenile Chinook overwinter here in the upper part of the Wallowa/Grande Ronde River basin. Those fish arrive at Snake River and Columbia River dams later in the year than fish that over-winter lower in the system. Some years these late Wallowa County arrivals have much better survival rates. So overwintering here is am important migration and survival strategy for Chinook. Providing habitat for these fish is important. The critical deep pools in small channels have become scarce because rivers were channelized in the past, and wetland areas with small channels were often filled in to provide agricultural fields.

“There are three things that juvenile fish need for a good survival rate,” said Menton. “First, multiple small channels with deep pools. Second, lots of woody debris in the them. And finally, quiet pools extended off the small channels for young fish to collect and rest.” The details of channel and pool design include these factors as well as prescriptions for the size and types of rocks in the channel bottom.

Restoration of riparian and wetland habitat and plants will be part of the project as well. “Plants will include willows, sedges, and small fruit bulrush,” said Katie Frenyea, fisheries biologist and Northeast Oregon Project Leader for Nez Perce Tribe’s Department of Fisheries and Resource Management in Joseph. “These three plants together may be able to out-compete reed canarygrass.”

Reed canarygrass is a tall, aggressive, perennial and highly invasive ornamental grass that diminishes wetland and riparian habitat for birds and mammals. It has a considerable foothold on some portions of the Homeland Project’s land. The wetland restoration plan includes several other strategies to control, and perhaps vanquish it, including placement of a cover of fine clays in areas where the reed canarygrass is well-established. “We’ve found that it can’t sprout through a fine-grained clay substrate,” Frenyea said. “We think that between the clays and the combined bull rush, sedge, and willow plantings, we’ll have it more under control.”

The native willows for the plantings will be gleaned for areas along the railroad tracks close to the Tamkaliks property. “The railroad is happy for us to collect the plants,” Frenya said. “It saves them from having to constantly trim them to keep their tracks clear.” Tules, a Nez Perce essential for many uses, will also be planted in the newly refurbished wetland areas.

The project is scheduled to begin this fall to winter, between October 2019 and February 2020 with the construction of the side channels. The river will be connected with its new side-channel system sometime in July or August, 2020, according to Menton. Finally, planting and seeding of native vegetation should occur in the Fall of 2020.

This project is part of the vision of both the Nez Perce Tribe and Grande Ronde Model Watershed for long-term, comprehensive river restoration “We work together on these projects,” Menton said. “Every year we do a project or two.We’re making progress, one small stretch of river at a time.”