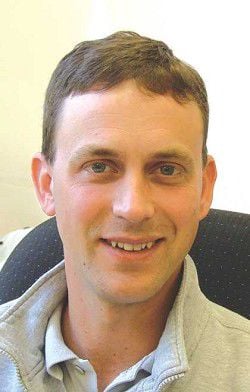 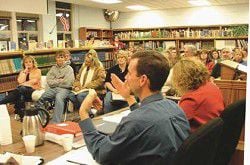 <I>Elane Dickenson/Chieftain</I><BR>Parents, teachers and district staff members came to the Dec. 10 Wallowa School Board meeting to show their support for superintendent Marc Thielman.

<I>Elane Dickenson/Chieftain</I><BR>Parents, teachers and district staff members came to the Dec. 10 Wallowa School Board meeting to show their support for superintendent Marc Thielman.

Wallowa School District superintendent Marc Thielman said he was totally unprepared when he received a standing ovation from supporters at a Wallowa School Board meeting.

"I was overwhelmed. I am speechless," Thielman said after the Dec. 10 meeting, when many of the 40-some persons stopped to shake his hand or hug him before leaving the school library. "It's nice to know that people recognize and appreciate your efforts."

The ovation followed a short speech by David Lattin, who said he was the father of two daughters in the school district and praised Thielman as a superintendent who is "young, energetic ... and an excellent role model for our kids."

Lattin was joined by two teachers, Lisa Lindsey and Marilyn Soares, in speaking on behalf of the second-year superintendent, who has been under fire and scrutiny in recent months. Lattin said after the meeting that he felt Thielman was being "harangued by a terribly small but vocal representation of the Wallowa district," with all issues stemming from the decision not to hire back football coach Greg Oveson last spring. He called Thielman "as good as they get" as an educator.

During the meeting, Lattin said that if Thielman has made mistakes in the past, "who hasn't?" The father said that the important thing is how Thielman interacts with the students. "He's learned, he's growing, he's capable," he said, urging district patrons to look to the future. "We can't look back if we want our school district to move forward," Lattin said, urging those critical of Thielman to channel their energy positively. "We are talking about our kids," he said.

Lindsey said that she felt that Thielman had done a wonderful job in creating a positive, safe environment at the school. "It's time to put our egos aside. ... I'm so sorry he's been put through the wringer."

Soares said that he is a friend to all the students, and "his decisions are not based on selfishness and impulsiveness. The children are the most important to him." She added, "We want him and his seven beautiful children to stay."

The only person to speak during the public comment portion of the short board meeting was Eva Oveson, who questioned the wisdom of the board's recent decision to invest in a biofuel heating system. "The biomass project is a huge chunk of our budget. ... It scares me. It might be better to invest in programs in the school." She questioned both the cost estimate and the funding of the project.

"Our goal is to get funding that won't affect our school," said school board member Ed Millar after the meeting, adding that the district could see as much as $60,000 a year savings in energy costs.

The district recently became the first in the nation to receive a $275,000 United States Department of Agriculture grant to build a biomass boiler, similar to the one being installed at the Enterprise High School District. The total cost was estimated at about $600,000.