<I>Photo submitted</I><BR>Arnold Schaeffer, left, treated his grandson and new grand daughter-in-law, Travis and Angie, to a sentimental speech on their wedding day about the history of marriage in the Schaeffer family. 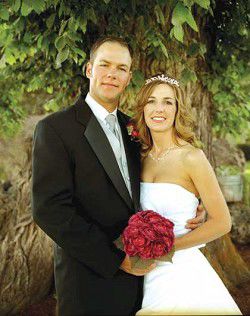 <I>Photo submitted</I><BR>The newly married couple, Travis and Angie Schaeffer, got married in the same place his great great grand parents did 133 years ago.

<I>Photo submitted</I><BR>Arnold Schaeffer, left, treated his grandson and new grand daughter-in-law, Travis and Angie, to a sentimental speech on their wedding day about the history of marriage in the Schaeffer family.

<I>Photo submitted</I><BR>The newly married couple, Travis and Angie Schaeffer, got married in the same place his great great grand parents did 133 years ago.

A special flavor of the old west comes alive again at the old Powers homestead in the Lower Valley of Wallowa County.

June 17 was a pleasant day in the Lower Valley. All of the Schaeffer family members were inspired with eager anticipation for the scheduled auspicious occasion.

I was concerned because it seemed to me that guests were quite slow at arriving. However, soon a heavy line of cars and pickups started to roll in. The minister, Ron Thies, and his friend Rob DeSpain came bubbling in on their Harley Davidsons. It was an inspiring moment. When my grandparents were married on this same property 133 years ago the minister was imported from Summerville. In lieu of the fact that there was no road in this territory at that time, the minister arrived on horseback.

The marriage ceremony took place under the old elm tree in Riek and Coras' yard. A good meal was served in the hay shed where tables and chairs were set up. The hay shed was decorated with christmas lights. Also near the hay shed was a ring of rocks for a fire. It was estimated that at least 200 people attended. Travis and Angie spent a pleasant honeymoon in Mexico.

Arnold Schaeffer dedicated a wedding speech to his grandson and his new bride and it follows as such:

Wedding speechThis is a bright spot in Lower Valley today. There have been a great many important historical events that take place on this Lower Valley Ranch property, where we are gathered today. Several firsts.

In the year of 1872 my great grandfather Winslow Powers homesteaded this property. The Powers family was the first white family to settle in Wallowa Valley.

In 1873 my grandfather Henry Schaeffer and grandmother Viola Powers were the first white couple to be married in the Wallowa Valley. That event was 133 years ago.

In 1874 my great uncle Loren Powers (Elwyn Powers dad) was born on this Lower Valley Ranch. He was the first white boy born in the Wallowa Valley.

In 1916 Elwyn Powers brother Lyle was born in the green house that I live in. When Lyle spent the night with us he slept in the room where he was born.

I recall Lyle telling me that he remembered when his dad Loren Powers planted an elm tree.

It had been 133 years since his great great grand parents were married on the same property.

I want to thank everyone for listening to me. Now I will turn myself off and say happy happy trails to you all until we meet again.