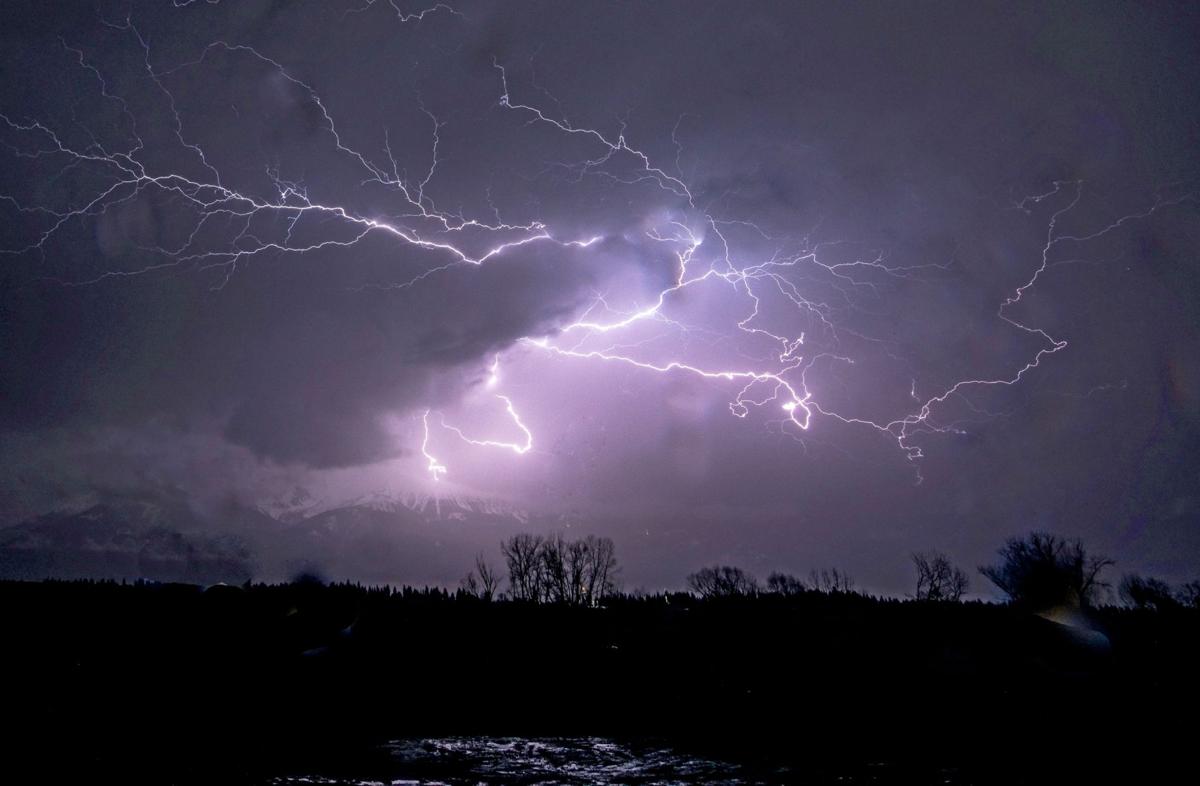 An influx of cooler, wetter marine air triggered thunderstorms that were unusually severe Friday night. Here, lightning appears to strike the north slope of Ruby Peak. More April showers -- without the pyrotechnics-- are forecast for Thursday and Friday this week. 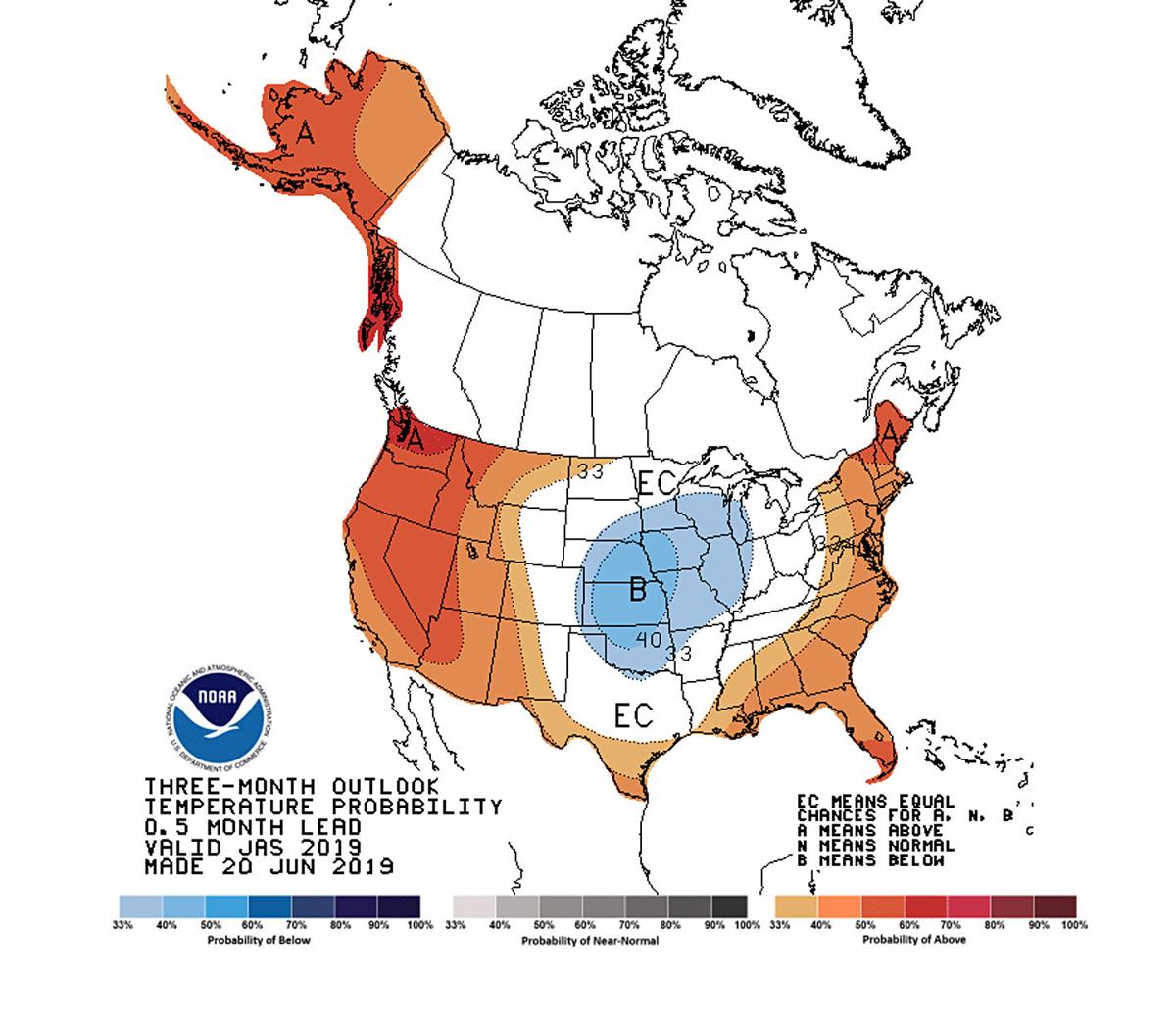 NOAA’s prédictions for summer temperatures indicate a 50-60 percent chance of above normal temperatures for the inland Pacific Northwest. 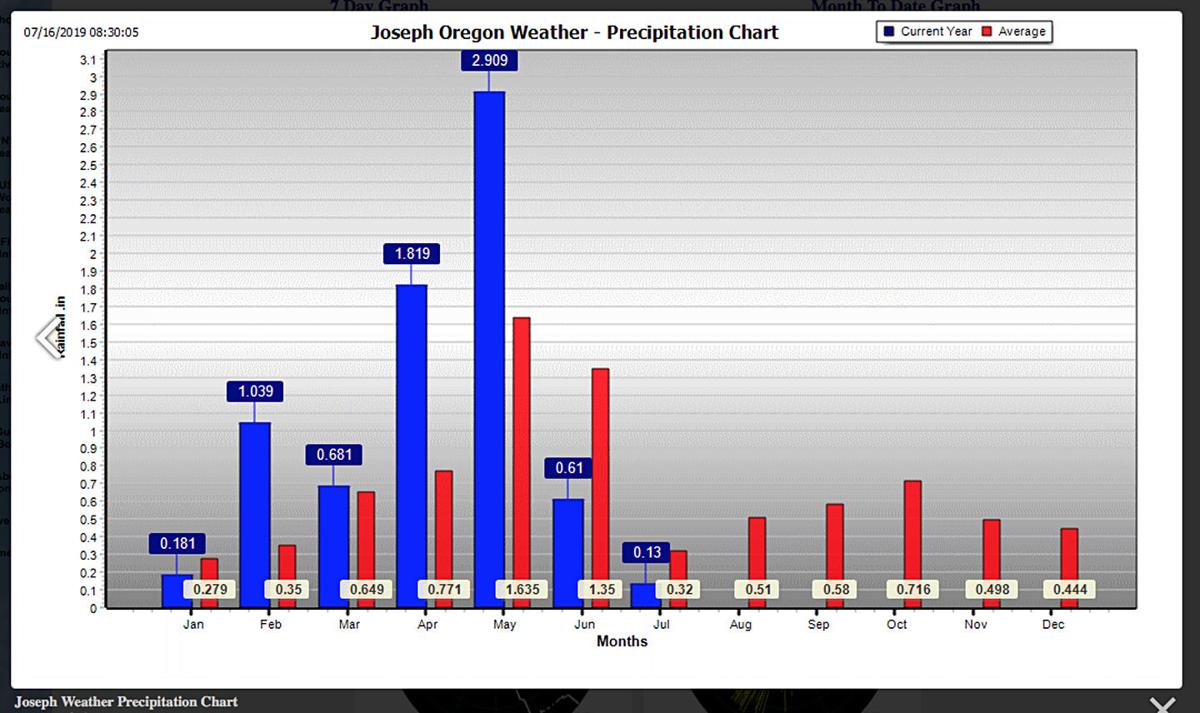 Joseph's precipitation for April and May, 2019 was almost double the amounts received in 2018. Graphic : josephoregonweather.com

An influx of cooler, wetter marine air triggered thunderstorms that were unusually severe Friday night. Here, lightning appears to strike the north slope of Ruby Peak. More April showers -- without the pyrotechnics-- are forecast for Thursday and Friday this week.

NOAA’s prédictions for summer temperatures indicate a 50-60 percent chance of above normal temperatures for the inland Pacific Northwest.

Joseph's precipitation for April and May, 2019 was almost double the amounts received in 2018. Graphic : josephoregonweather.com

A whole lot of us have endured what seems a chilly, wet spring and a July that so far has felt all-too-little like summer. That first cutting of hay was dismal and difficult, held hostage by drizzly and unpredicted rains. While that first cutting is always a challenge to put up, this year vacillated between frustrating and heartbreaking. Long-time stockman Mack Birkmaier bemoaned June weather. “We just can’t get the hay in,” he said. “I don’t quite remember it ever being this bad.”

You don’t have to be a rancher or farmer to have been stricken with depression over the balky arrival of summer. Eighty degrees—the gold standard for summer temperatures to many here — seemed unattainable. Hikers donned—and then shed — rain gear at a record pace. On some days it seemed you got wetter sitting on the beach at Wallowa Lake than you did if you actually went into the water. April and May were especially generous with precipitation, uncorking nearly twice the rainfall of 2018, according to our very own josephoregonweather.com. Temperatures may have seemed cool amid all this dripiness, but in fact, they hovered around the 30-year average for most of the spring and early summer.

But as summer rounds the first turn and heads into Chief Joseph Days, things are changing. This past weekend saw the first lightning-besotted thunderstorms of the summer—with the exception of the raging early-bird storm in April. Their more than 100 strikes, total for the weekend’s celestial fireworks, sparked small fires near Lostine and Flora. They abolished the Chieftain’s access to the Internet for an entire day. And they are the harbingers of things likely to come.

The weather for the coming week is forecast to be warm, venturing into the high 80s by Monday and Tuesday. No rain. A pattern typical of summer. The high eighty’s in fact are a pretty normal to cool temperature for Joseph in late July. Back in 1949 temperatures reached into the high 90’s and flirted with 100 during Chief Joseph Days. As then-court-member Marian Birkmaier remembered—“It was just so hot during the day that sometimes you almost couldn’t breathe.” Fact is The National Weather Service’s three month forecast predicts a 50 to 60 percent chance of warmer than normal temperatures across the northwest, with below normal precipitation for July, August, and September. Below normal precipitation here is not very much.

We all know that as temperatures climb and forests and grasslands dry out, the threat of wildfire increases expotentially. The National Interagency Fire Center (NIFC) has issued a tempered warning for the inland northwest, including Wallowa County:

“The above average precipitation expected over the Rocky Mountains and Great Basin may extend into eastern Oregon and Washington. West of the Cascades, especially in Washington, the most likely scenario favors less summer rain than usual.

At the end of June, fire danger indices have not stayed at levels capable of supporting large fires in timber. With warmer than average temperatures expected in July, fire danger will rise and will likely quickly achieve values required for large costly fires during the first 10 days of the month. Instances of large fires will likely depend on concentration of lightning storms.”

We might also add ‘and on the caution or fecklessness of humans in the back-country.” We can’t control either of those factors, unfortunately.

And so it’s time to take a deep seat in the saddle and hold tight to the lead rope. Nature is about to open the arena chute’s gate to summer. We have many forested areas that are over-stocked and highly flammable, some of which, including the Lostine Corridor and the forests above Alder Slope, are chock full of grand fir that are dying from the higher spikes in summer temperatures during the past century, according to OSU Extension Forester John Punches.

Let’s hope that this summer, the Wallowas remain a clearly visible part of our landscape, rather than a range obscured by smoke. And let’s also ensure we avoid being culpable for ignition, whether it’s care with campfires and hot exhaust pipes or thinning whatever portion of the woods we might oversee.

The lightning, however, is something we just have to watch in awe, and with crossed fingers.