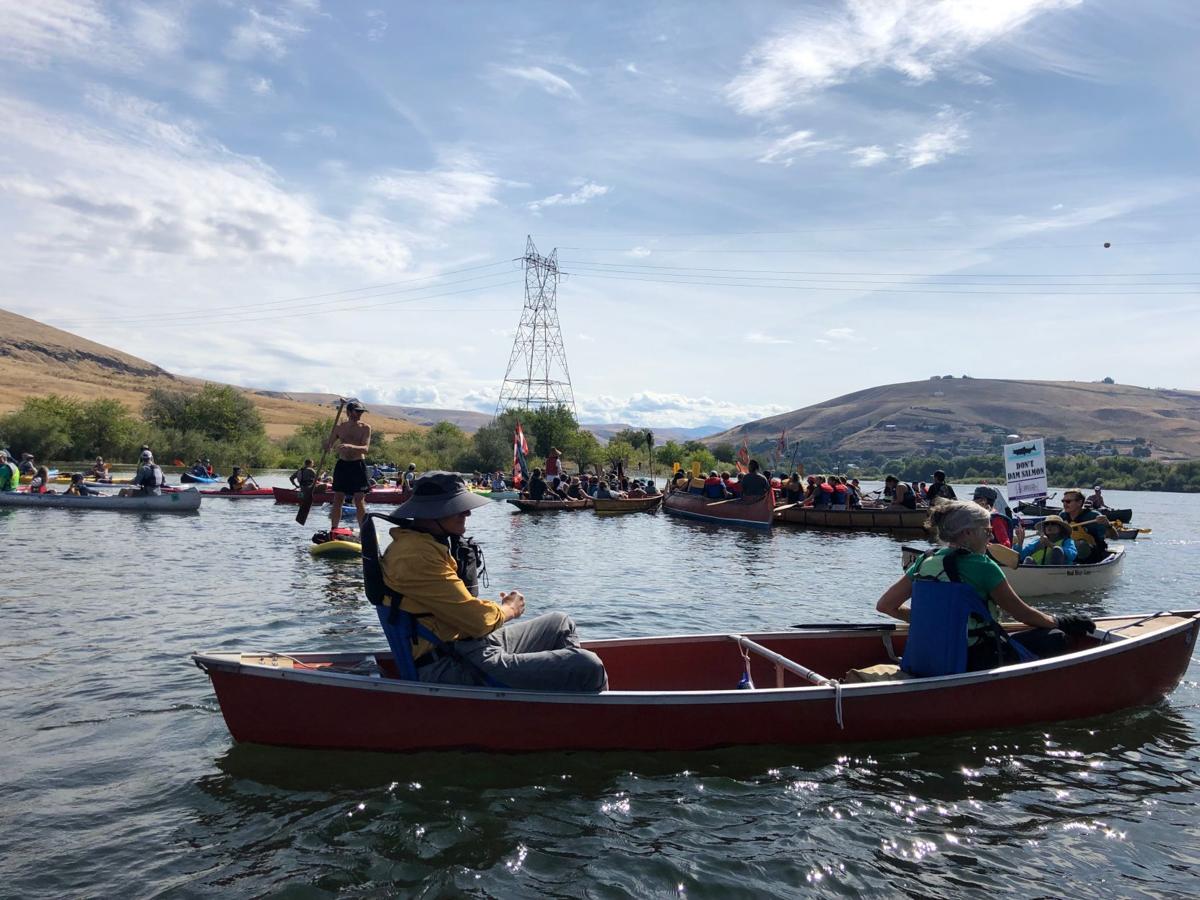 People from across Oregon and Washington, including Wallowa and Union Counties, attended the rally for removal of the lower four Snake River dams. 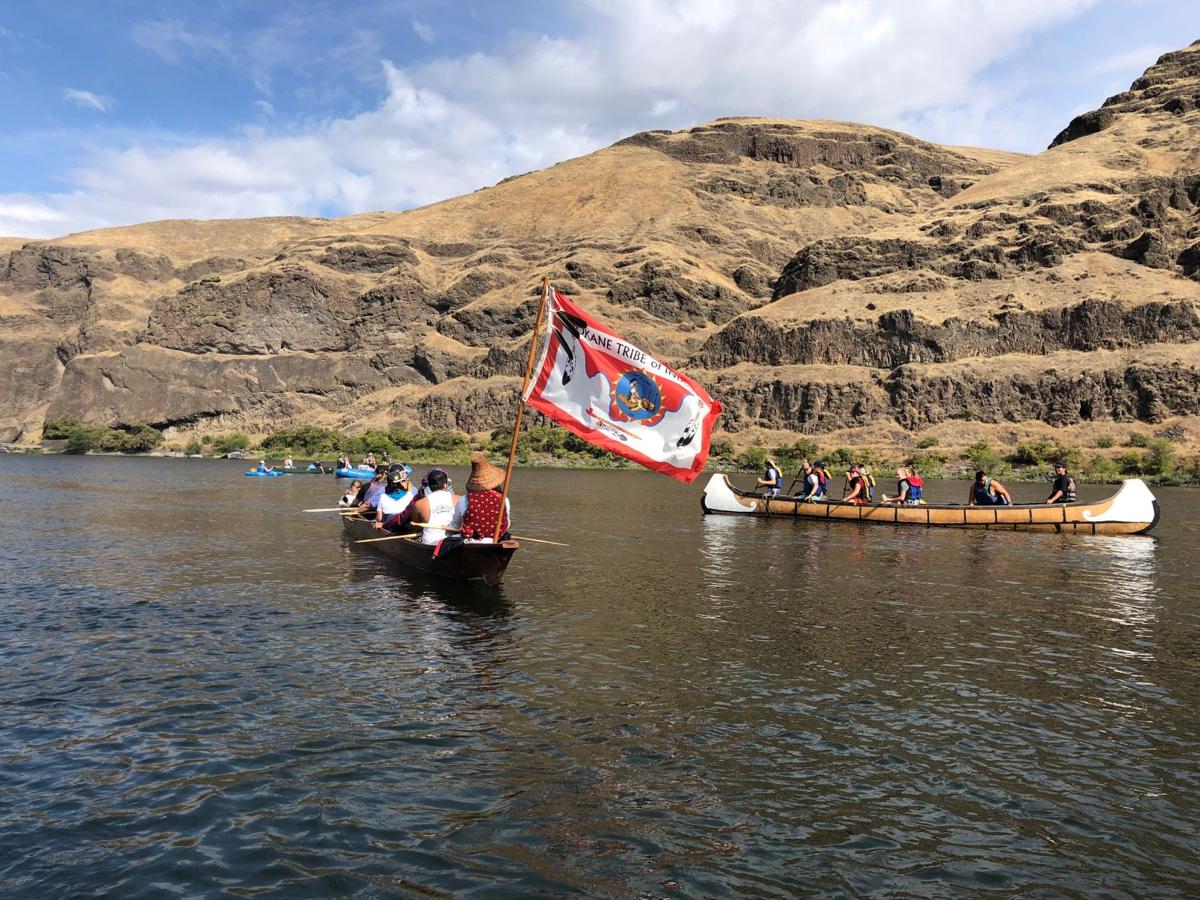 Canoes from many Pacific Northwest tribes, including the Nez Perce, Spokane, and many others participated in the rally for removal of the four lower Snake River dams.

People from across Oregon and Washington, including Wallowa and Union Counties, attended the rally for removal of the lower four Snake River dams.

Canoes from many Pacific Northwest tribes, including the Nez Perce, Spokane, and many others participated in the rally for removal of the four lower Snake River dams.

It’s all connected: that was the takeaway theme from this year’s Nimiipuu River Rendezvous, the fifth annual paddle rally on behalf of breaching the four lower Snake River dams. “From the mountaintops to the ocean, it’s the same water,” said Nez Perce Tribal member Gary Dorr, whose lineage is Wallowa band, and who was paddle master of the event. “We want you to go home with a lot of relationship to this water,” he told gathered attendees at Hells Gate State Park on September 20th, 2019, as he and others welcomed them to the Rendezvous.

The three-day event included film screenings; dancing; two nights of shared food including elk and salmon (Alaskan salmon, ironically—this year’s Snake River Chinook returns have been very low); talks and stories by Tribal elders, economists, scientists, and fish and orca advocates remembering the river before the lower Snake dams went in and making the case for their removal; and a paddle that brought hundreds of people out onto the reservoir to show support for a free-flowing river.

A small contingent had made the trek from Union and Wallowa counties to the event at Hells Gate State Park. Why did these Oregonians come? What do they imagine will happen in their upstream homes if these four dams (Ice Harbor, Lower Granite, Lower Monumental and Little Goose) are breached? Each had their own reasons, but all echoed the same theme: connection.

“If we took these dams out,” said Garik Asplund of Joseph, “there’d be a stronger link between our inland mountains and the ocean. Salmon are a huge source of marine nutrients for our trees, for our rivers, for the lake, for people—why would you cut off a self-sustaining influx of nutrients when you need it?”

David Moyal of La Grande said he’d brought his ten-year-old son to the rally to help him understand the interconnectedness of all the life that depends on the Northwest’s great river systems. David was once a river guide and he remembers trips on the Snake before the dams went in: “Beaches the size of five football fields, endless beaches, and the trees and animals down by the water were just amazing. Being on the river now is great,” he said, “but it tears my heart out, too, because the riparian corridor is decimated. There’s no sediment”—it gets caught behind the dams and has to be dredged every couple of years, at taxpayer expense—“so the beaches and backwaters are gone or disappearing; there are no nooks and crannies being created anymore for the bottom-of-the-foodchain critters that sustain abundance. Fish decline is just the most obvious decline. It’s all connected.”

Gary Dorr, the Wallowa Band Tribal member, is also a former Chairman of the Nez Perce Tribe and a member of the recently convened Idaho Governor’s Salmon Workgroup. Over the course of the rally, Gary spoke about salmon and the struggling Puget Sound orcas, which depend on abundant Chinook runs. But he too emphasized the less charismatic animals. “This year 21 lamprey make it through the dams,” he said, for example. “There used to be millions. Lamprey swim awkwardly. They latch onto salmon to get around more easily. People think that’s a bad thing, an ugly thing. But lamprey are buffer prey. The predator birds and fish feed on lamprey and so the juvenile salmon make it through. It’s a trade-off. This year, 21 of these fish made it up here to our waters. In our lifetimes, something could go extinct. This year, for all we know. Our food supply is upside down.”

Pip Redding of Enterprise agreed. Breaching the dams “could strengthen local food systems,” he said. “There’s inherent value to being able to get your food from the place where you are.”

Throughout the rendezvous, as they watched films and discussed economic transformations, attendees at the rally worked to keep in mind the connections between small abundant species and large endangered ones, between mountains and oceans, snowpack and late-season water, water temperatures and fish survival, irrigators and predators, economics and natural systems. While these relationships are complex, one connection is very straightforward, and it infused the whole gathering: what happens on the lower Snake River matters to everyone upstream and down. As Nez Perce elder Allen Pinkham Senior put it, whether you’re Tribal or non-tribal, a top-of-the-foodchain human being or a lamprey, a headwaters hiker or an ocean fisherman, “what we all have in common is water.”