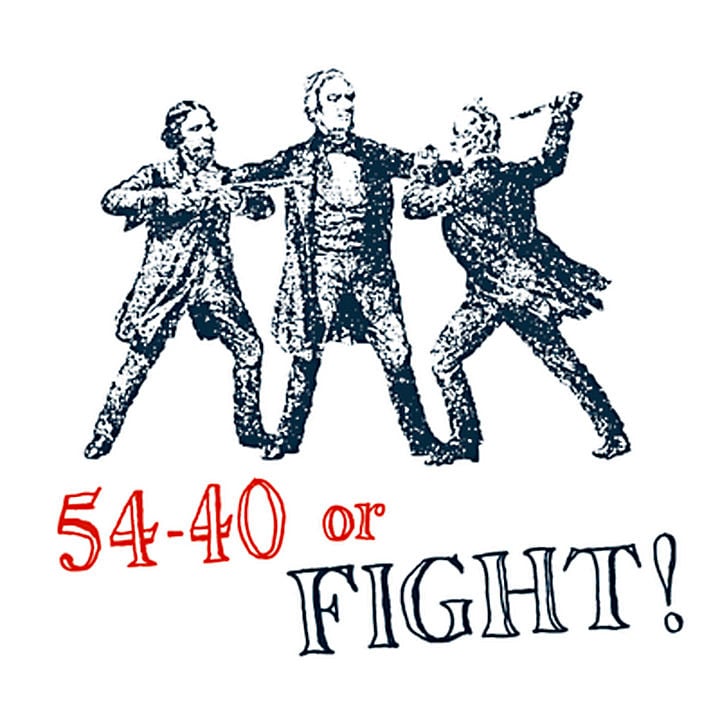 Feelings about acquiring the British rights to Oregon ran high in 1844. 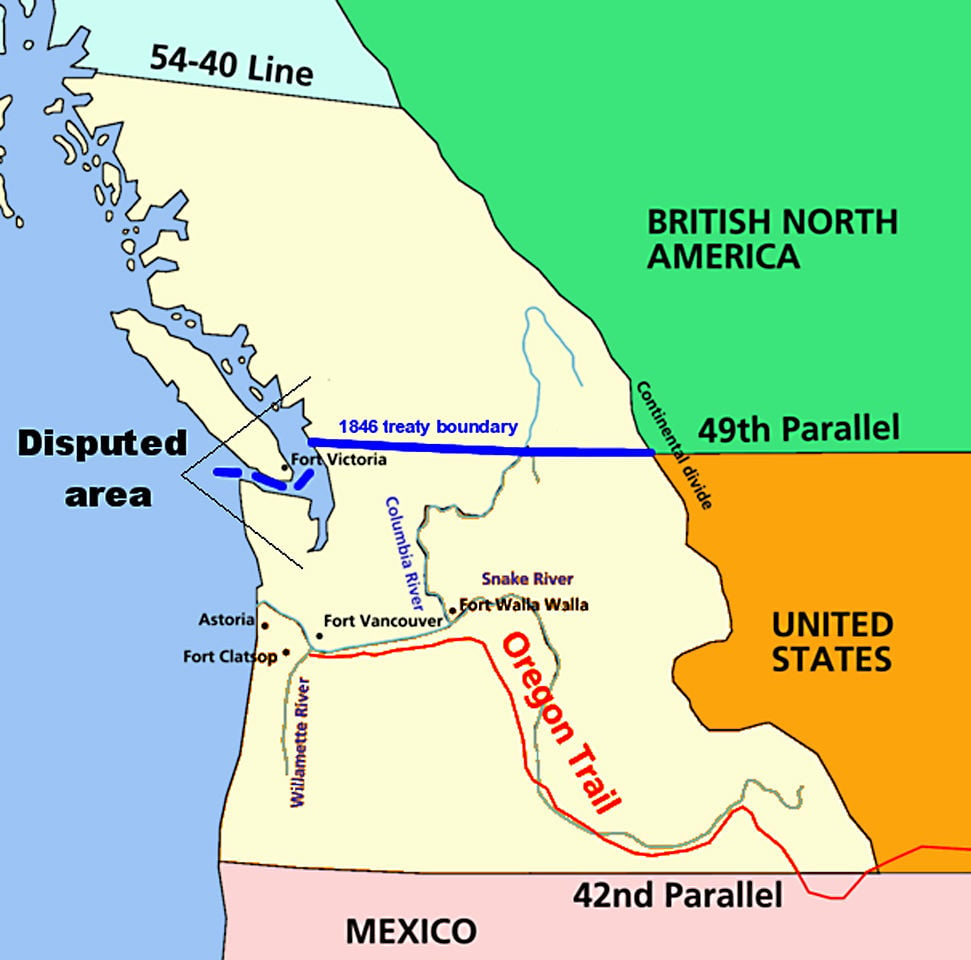 If a dispute over something this big can be resolved to everyone's eventual satisfaction, surely we can figure out a way to talk about climate and sequestering carbon.

Feelings about acquiring the British rights to Oregon ran high in 1844.

If a dispute over something this big can be resolved to everyone's eventual satisfaction, surely we can figure out a way to talk about climate and sequestering carbon.

Back in the day—in 1844 to be more precise—James Polk’s famous campaign slogan was “54-40 or Fight.” It referred to the line of latitude that served as the northern border of Oregon at 54 degrees 40 minutes. That, of course was in the days when Oregon extended north to the Canadian border, the Canadian border was 300 miles north of where it is today, and Washington State had not yet been conceived. James Polk knew that the American public wanted the entire territory of Oregon for the U.S. alone. (At the time we co-managed it with the British and it was unclear exactly how this would work out in the long run.) Polk ran his Presidential campaign with the slogan "Fifty-four Forty or Fight!" to claim Oregon for the U.S. or go to war with the British. The British came to the table and over a lengthy negotiating process, agreed to withdraw, with the caveat that the border would not at 54-40, but at the 49th parallel, about 300 miles south of where Polk wanted it. Everybody got something out of the deal.

Some 175 years later,  a pugilistic attitude seems to have settled back into our state. Instead of 54-40 or Fight, we now have 1530 and flight. And the consequences have the potential to be much more dire than in 1844, when politicians growled, bellowed and rattled sabers, but ultimately sat down  and talked the problems out.

1530 is the spiffy new slimmed-down (120 pages distilled to 94) cap and trade bill that has been roundly castigated by State Senate and House Republicans, and is so vilified that once again they have taken leave of Salem and presumably their senses as well, and fled. They seem terrified of conversations, discussions and civil ways of resolving problems. Instead, they have reverted to the behavior of petulant three-year-olds rather than responsible adults. Worse, they have abandoned legislative responsibilities that include aid to the stricken, flood ravaged communities in Umatilla County and elsewhere in eastern Oregon.

If they had been charged with settling the 54-40 dispute, we might be part of Canada today rather than the U.S.

SB 1530, all 94 pages of it, is not perfect. But it is a slightly improved and necessary step toward reduced greenhouse gasses and some hope to minimize climate change. Importantly for Oregon, it offers a potentially profitable way for ranchers and timber managers to augment the long-term productivity of their land, and get paid for doing so: carbon sequestration.

Senate and House Republicans who have participated in the walkout do have valid objections to this bill, including the Democrats' hope to rapidly pass a long, complex piece of legislation during an abbreviated session, concerns about fuel prices, and an anathema to the overblown bureaucracy that 1530 (and 2020 before it) seemed destined to nurture. And as humans, especially conservative rural ones, we are easily scared by things that we don’t fully comprehend, don’t have time to mull over, and probably will have very little control over.  We tend to run away from them.

But running away from a problem never solved the issue. And the problem of climate change needs solving. SB 1530, like its predecessor HB 2020, contains many positive provisions for rural communities,

So how about we make a deal. Republicans return to Salem, behave like adults and pass the bills their constituents in Umatilla County and elsewhere need. In return, Democrats agree to include Republicans in their climate bill-writing process, or at least invite them to the table, and as much as possible, avoid reinventing multiple agencies and adding layers to bureaucracy. Even this won’t be easy. But maybe we could start with smaller (in both concept and length) baby-steps bills: A bill that regulates (or re-regulates) methane emissions in large landfills. A bill that changes allowable ethanol in gasoline. A bill with the incentives and a market for carbon sequestration.

Delta airlines announced this week that it was going to be carbon neutral within ten years. How will they accomplish this? As Forbes reported, it’s not by flying electric powered aeroplanes, but by buying carbon offsets. A lot of them. A billion dollars of them. Carbon sequestration in forests and grasslands? Delta is just one of many companies looking to do the same. It’s a real thing and a real market and it's something that we, with grasslands and forests that can do the job, should not let pass us by.

The way James Polk got the British to hand over Oregon (and Washington) was not through force, but by negotiation that was aided by a threat. OK Republicans. You’ve threatened the Umatilla flood victims and the rest of us enough. It’s time to do your jobs. And it's time to get serious about the climate—even if it's just one cautious baby step at a time.