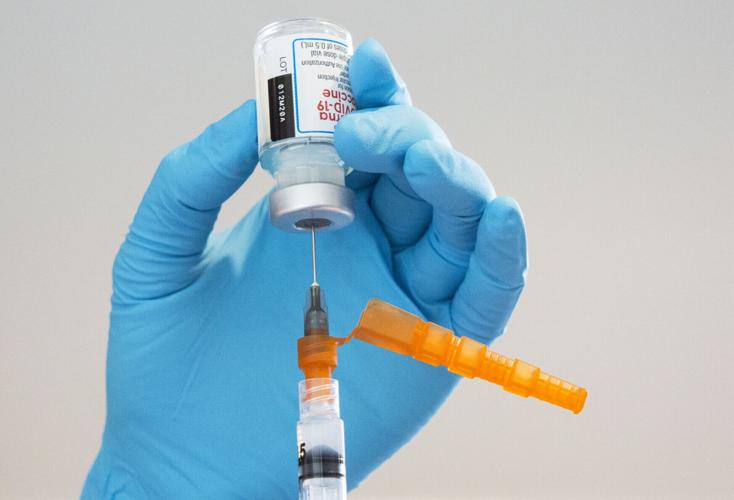 A syringe is filled with the Moderna vaccine during a COVID-19 vaccination clinic at Bethlehem Inn in Bend on Friday, Feb. 19, 2021. 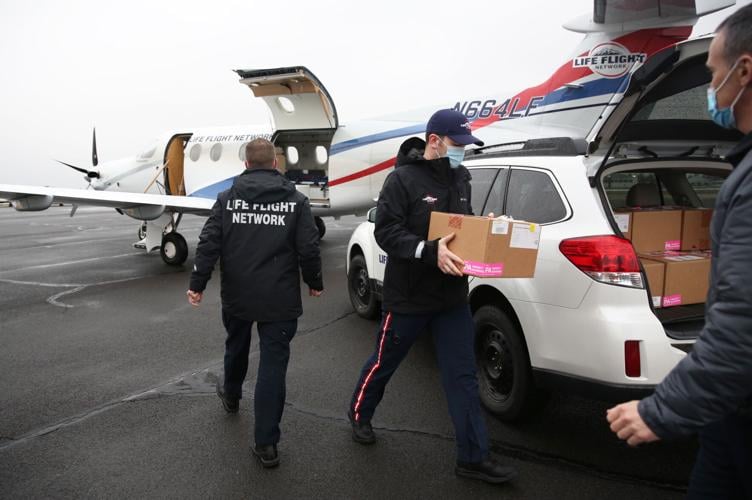 Life Flight Network personnel transport COVID-19 vaccine Thursday that was flown in from Portland to be used at the vaccine clinic in Redmond. Separately, the Veterans Administration flew in vaccine for use at the clinic in Bend. 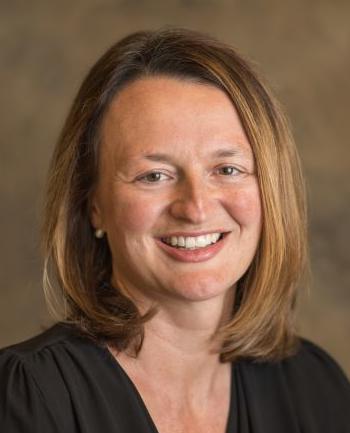 A syringe is filled with the Moderna vaccine during a COVID-19 vaccination clinic at Bethlehem Inn in Bend on Friday, Feb. 19, 2021.

Life Flight Network personnel transport COVID-19 vaccine Thursday that was flown in from Portland to be used at the vaccine clinic in Redmond. Separately, the Veterans Administration flew in vaccine for use at the clinic in Bend.

On a chilly Thursday morning in December, hope arrived in a box.

At 10:25 a.m., a FedEx truck special delivered its only cargo — a single temperature-controlled box of 975 doses of the Pfizer-BioNtech COVID-19 vaccine — to the St. Charles Bend loading dock where Debra Carlson, an inventory coordinator for the hospital’s inpatient pharmacy, officially received it.

“The eagle has landed!” said Carlson, her cell phone in her hand and on speaker with St. Charles’ security team.

“It’s such a symbol of hope and a next step forward for us,” she said. That day, St. Charles Bend had 50 COVID-positive patients, some of whom were in the Intensive Care Unit and on ventilators. “So, we’re very excited.”

Against the backdrop of a global pandemic that has claimed a staggering two million lives and counting, it was a historic moment. In the same year that COVID-19 abruptly landed on the doorsteps of the United States, the scientific community delivered a vaccine.

But in the months that would follow, getting that vaccine into the arms of as many Central Oregonians as quickly as possible would prove to be yet another challenge.

The distribution process is complicated.

It starts with the federal government, which decides how many vaccines each state will receive weekly. From there, the Oregon Health Authority decides how many vaccines to send to the approved distribution sites throughout the state. Those sites include county health departments, hospitals, primary care clinics, pharmacies and other health care providers who have gone through a state application process.

Then there’s the enormous logistical, financial and staffing lift to create the clinical infrastructure for administering the shots.

In short order, the organization set up a caregiver vaccination clinic that included everything from the notification and registration process to the physical layout of the clinic (which had to provide a safe route for caregivers to check in, receive their vaccine and wait in a respite area for observation), to the precisely timed process for thawing and diluting the vaccine in preparation for administering it.

“It is no small feat to set up a precision vaccination program so quickly,” said Dr. Fran McCabe, an emergency room physician who was among the first six health care providers in Central Oregon to receive the shot at the Bend hospital. She was joined by a certified nursing assistant, a respiratory therapist, an environmental services caregiver, a registered nurse and a phlebotomist.

“While it’s very exciting, I realize that it is just a first step in a long journey and we will all need to remain vigilant,” she said.

While establishing the caregiver clinic proved to be a large and complex process, the hard work that went into designing it laid some of the groundwork for what would come next: a large-scale vaccination clinic at the Deschutes County Fair & Expo Center in Redmond that, at full capacity, can vaccinate up to 3,000 people a day.

By Feb. 18, almost three months to the day after the arrival of the first shipment of vaccine, St. Charles, Deschutes County and the Oregon National Guard had partially or fully vaccinated some 18,000 people in Crook, Deschutes and Jefferson counties at the fairgrounds site. That accounts for about half of the 36,000 people in Central Oregon who had received one or both shots by that time, according to Oregon Health Authority data.

Just as remarkable as the high-throughput design of the clinic was the outpouring of offers from volunteers to help run it. More than 1,000 people generously volunteered their time through Deschutes County’s Public Health Reserve Corps program, so many, in fact, that recruitment had to be out on hold, said Trevor Janeck, a talent acquisition manager at St. Charles.

“The response from the community on this has been incredible,” he said. “Everyone who has volunteered has been so kind and so willing to do whatever it takes to make this place work as smoothly and efficiently as possible.”

Volunteers at the clinic help ferry people from the parking lot to the door, greet people as they enter, register patients and help guide them through the process, among other jobs. Their efforts have been a vital part of the operation so far, Janeck said — and inspiring.

“Almost every one of them says more or less the same thing: ‘It’s just so important that we get this vaccine to people, and I want to help however I can,’” he said.

That attitude has shaped the experience of many eligible people who have had the opportunity to get their vaccine, such as Art Smith and his wife Barbara Ryerson-Smith, who celebrated their 60th wedding anniversary on Feb. 18 by getting their COVID-19 vaccine shots together.

The couple, who both turn 82 this year, met in high school in Seattle and married a few years later. In 2005, they moved to Redmond, where they’ve made more good friends than they ever had in Washington, Art said.

For a year they were unable to spend quality time with those friends. They missed going out to dinner and attending church and regular visits from their granddaughter, who works for St. Charles. They didn’t see their son at all for a year.

“You get tired of being on lockdown, you know?” Art said. “We’ve been trying to follow the rules, but at the same time, it makes you lonesome. So you’d like to get to a point where you can be protected enough that you can go ahead and start having real relationships again, rather than over the telephone.”

Barbara said she has a couple of friends who are skeptical about getting the vaccine and were waiting to hear about her experience. But she wasn’t skeptical. In fact, when her opportunity came along, she pounced.

“I have absolutely no qualms at all about getting it,” she said, her hand clutching Art’s hand. “I’m ready to go back to some sort of normal.”

While the success of the vaccine clinic is undoubtedly something for Central Oregon to celebrate, it will likely be many months before everyone who wants a vaccine is able to get one based on the nation’s vaccine supply.

There will invariably be other unforeseen problems, too, like the one Deschutes County was dealing with on the same day the Smiths celebrated their diamond anniversary by getting inoculated.

In the days leading up to Feb. 18, frigid temperatures, snow and ice devastated parts of the country, stalling shipments of vaccines, including the one Deschutes County was expecting for clinics scheduled to occur later that week. With its Moderna shipment stuck in Memphis, Tennessee, the county lit up phones until it was able to get help — 1,700 doses — from Legacy Health in Portland, which sent the vaccine via a Life Flight plane.

“Every day brings something different,” said Molly Wells-Darling, deputy incident commander for Deschutes County’s Incident Management Team. “But we are committed to vaccinating every person in our community who wants it and will do our very best to make that happen.”

Get up-to-the-minute news sent straight to your device.

Submitting this form below will send a message to your email with a link to change your password.

An email message containing instructions on how to reset your password has been sent to the e-mail address listed on your account.