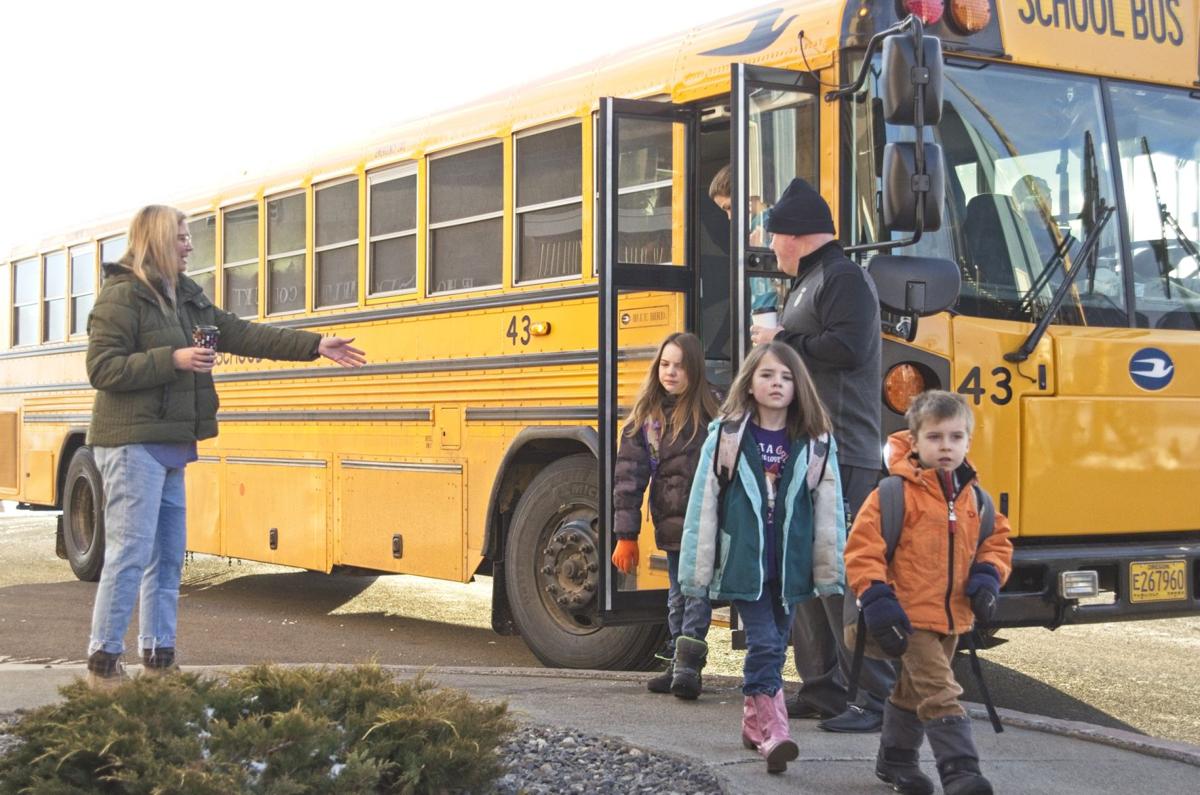 Students disembark their bus while teachers and staff direct them on which way to go Monday, Feb. 10, 2020, at Joseph Charter School. A month later school would close again due to COVID-19. Rural districts want to open classroom learning again this fall. 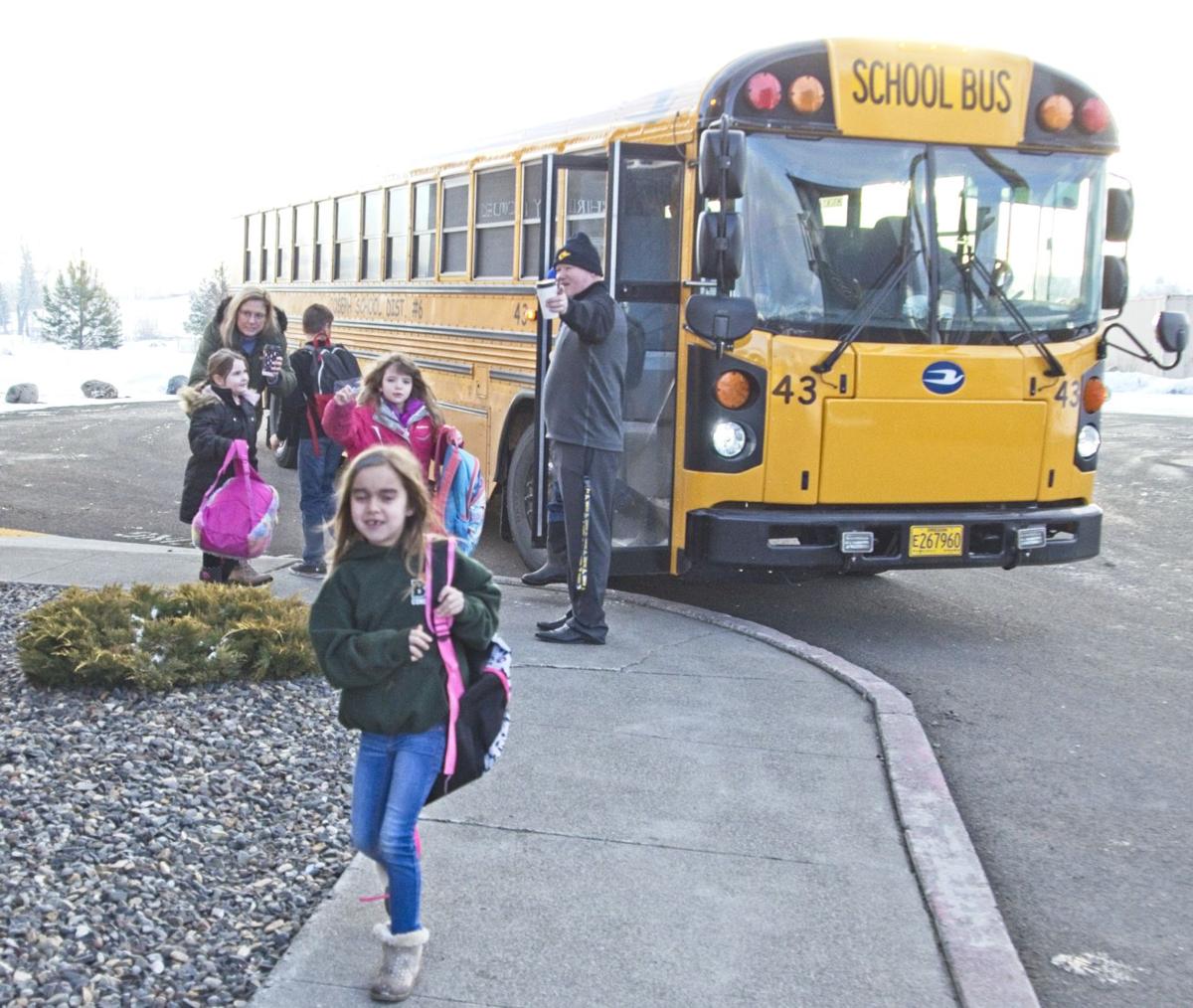 Students disembark their bus while teachers and staff direct them on which way to go Monday, Feb. 10, 2020, at Joseph Charter School. They were banned from classes due to COVID-19 only a month later. Rural schools want their students to return to classrooms this fall.

Students disembark their bus while teachers and staff direct them on which way to go Monday, Feb. 10, 2020, at Joseph Charter School. A month later school would close again due to COVID-19. Rural districts want to open classroom learning again this fall.

Students disembark their bus while teachers and staff direct them on which way to go Monday, Feb. 10, 2020, at Joseph Charter School. They were banned from classes due to COVID-19 only a month later. Rural schools want their students to return to classrooms this fall.

ENTERPRISE — Rural school districts in Wallowa County and across Eastern Oregon are a step closer to putting students back in classrooms this fall.

Brown announced Wednesday, July 29, that only one rural school district in Oregon — Wheeler County — met the Oregon Health Authority criteria to hold classes in school buildings this year. The following day, superintendents of 25 rural school districts met to draft a letter requesting that rural districts be allowed to put students back in classrooms this fall.

“This is part of an effort in the Eastern Oregon region to take a harder look at those metrics that the governor established,” said Wallowa County Education Service District’s Karen Patton. “We see those as not necessarily matching our risks in our counties.”

Patton participated in the July 31 meeting.

“The outcome of the call (July 31) was that the governor was supportive of, and would allow a task force to be formed to look at those metrics,” she said.

That task force would include representatives of local public health, the state superintendent, school superintendents, and teachers all coming together for rural counties. Several rural districts and counties in Southern Oregon also have participated in the talks, she said.

“We’re looking for a path forward so we can actually have school,” Roberts said. “The metrics that they have overlaid on the entire state are unattainable by any rural county. We asked that rural counties be able to write a metric that makes sense so that we can have school back in classrooms for students who want to go back to class.”

Roberts pointed out that the state has emphasized that rural areas are not immune to COVID-19.

“We know that, and we are prepared to handle it. We want to use a metric that makes sense,” she said.

“We would like to be back in the school this fall,” Joseph Charter School Superintendent Lance Homan said. “We would work with our local health care providers, and would follow their input locally.”

In Enterprise, Superintendent Erika Pinkerton said the district’s plan has been to offer a hybrid online-classroom program, with schools opening on Sept. 8. But that may change, depending upon the outcome of efforts to make opening guidelines more realistic for rural schools. “Hopefully the metrics will be changed so (the hybrid plan) can happen. If it does not work out, then we will start online,” she said.

“He and others are supportive of that idea,” he said. “We hope to have a solution that works for everyone sometime next week.”

Although Wallowa Superintendent Tammy Jones, was not able to attend the meeting, she supports its intent.

“Offering in-school classes is our plan,” she said. “Our blueprint is to provide classroom learning, as well as online classes for those who have health and safety concerns. This new decision took us by surprise.”

Enterprise’s Pinkerton, who participated in the meeting, said that she hoped the Oregon Department of Education and Oregon Health Authority could find a way for rural districts to return to the classroom.

“We’ve had a number of students signal their intention to withdraw from Enterprise and enroll in an online learning academy,” she said. “That would mean a significant loss of state funding for the local Enterprise School District. I think that (the loss of students) could cause some small rural districts to close, if students enrolled in online academies.”

Pinkerton said Rep. Greg Walden, R-Ore., asked for additional data on the effects on school, students, families and community due to the closures in the spring.

“I feel like we are being heard through his office,” she said.

Bobby Levy, the Republican candidate for the Oregon House District 58, also reached out to Pinkerton to provide support and discuss the impact on small communities.

“Here in rural counties, if we have even one case, there’s no way we can ever open our schools,” Pinkerton said. “I think that’s the governor’s intent, without having the courage to just close the state down to classroom learning.”

Pinkerton said that the present mandate might mean that if a school opens, it might have to shut down for three weeks later in the year.

“There’s no consistency for our kids or staff or parents,” she said. “I’m pretty heated about this.”

“I haven’t made any decisions yet,” Pinkerton said. “But we love our students and our families, and we want to keep them in the schools here.”

Witty said Eastern Oregon superintendents were working hand in hand with ODE to address the concern. Witty said he was developing a list of potential ways that the state could consider exceptions in these situations.

“The reality is that the state has to have a metric,” he said. “But if you apply a uniform metric across a state, it can impact various counties with small population sizes in ways that don’t make much rational sense. For example, in Wallowa County, one case puts you out of the classroom. So is there a way that we can look at some exceptions? Everybody has the goal of keeping people safe. But Jordan Valley being tied to Ontario’s metrics may not make rational sense. That’s what we brainstormed.”