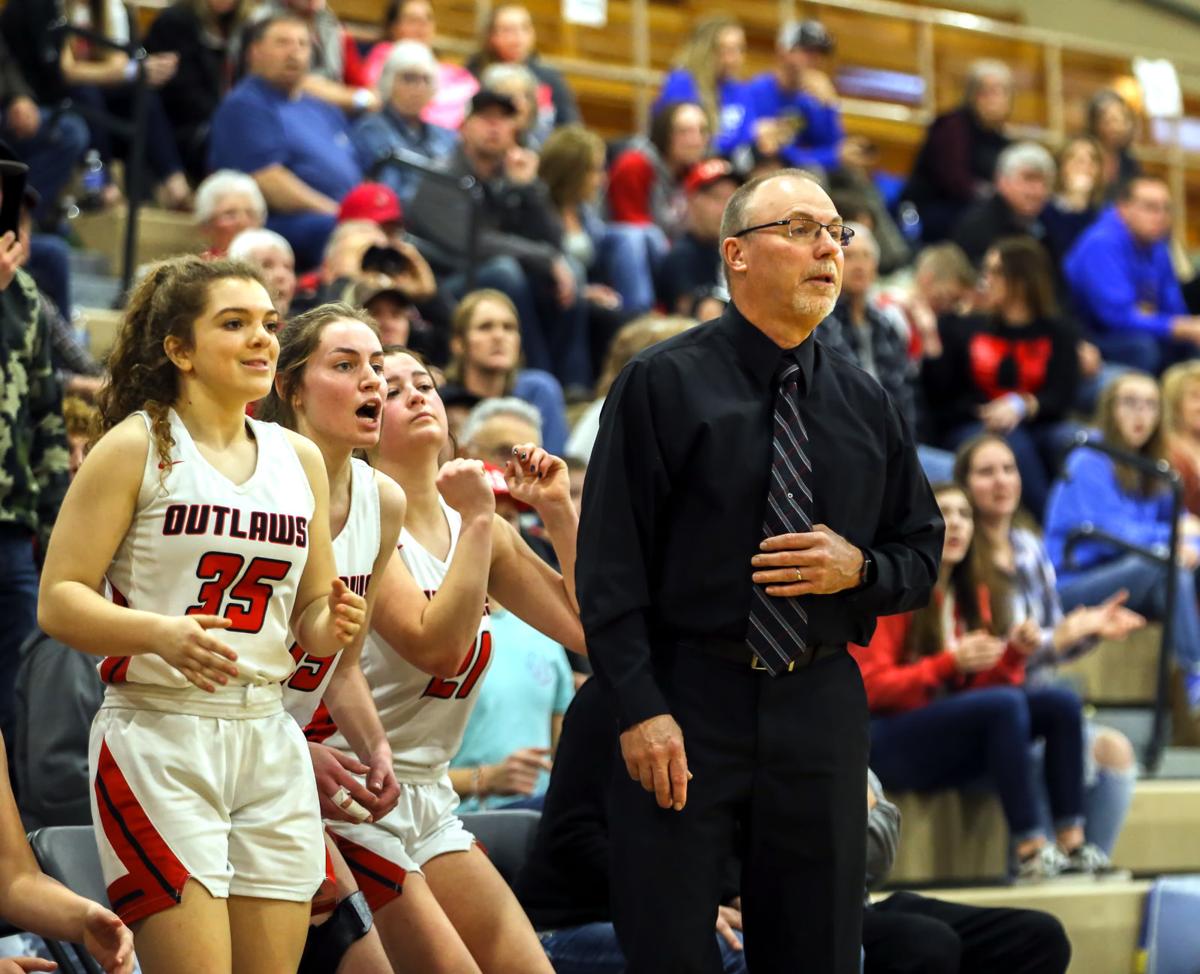 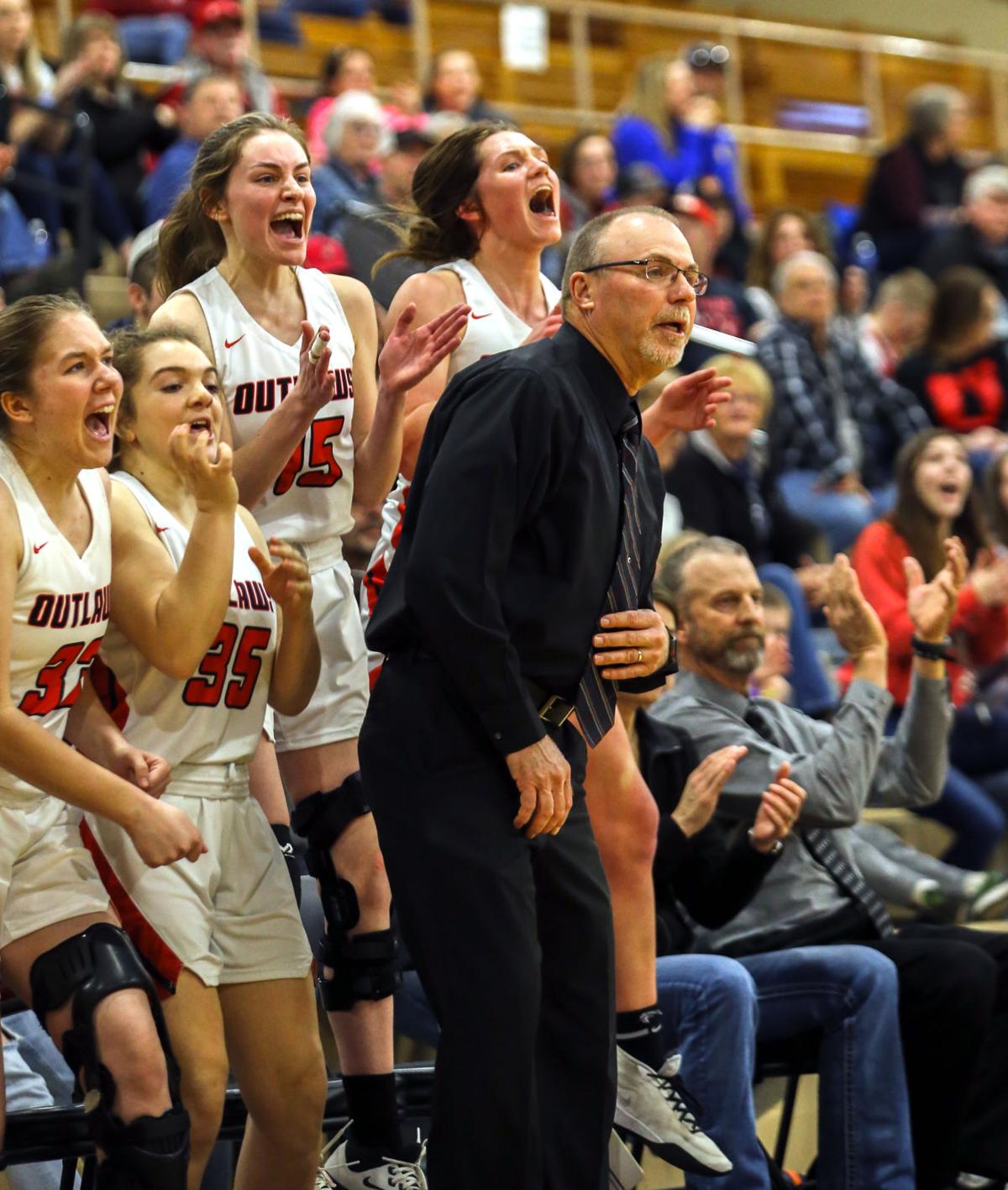 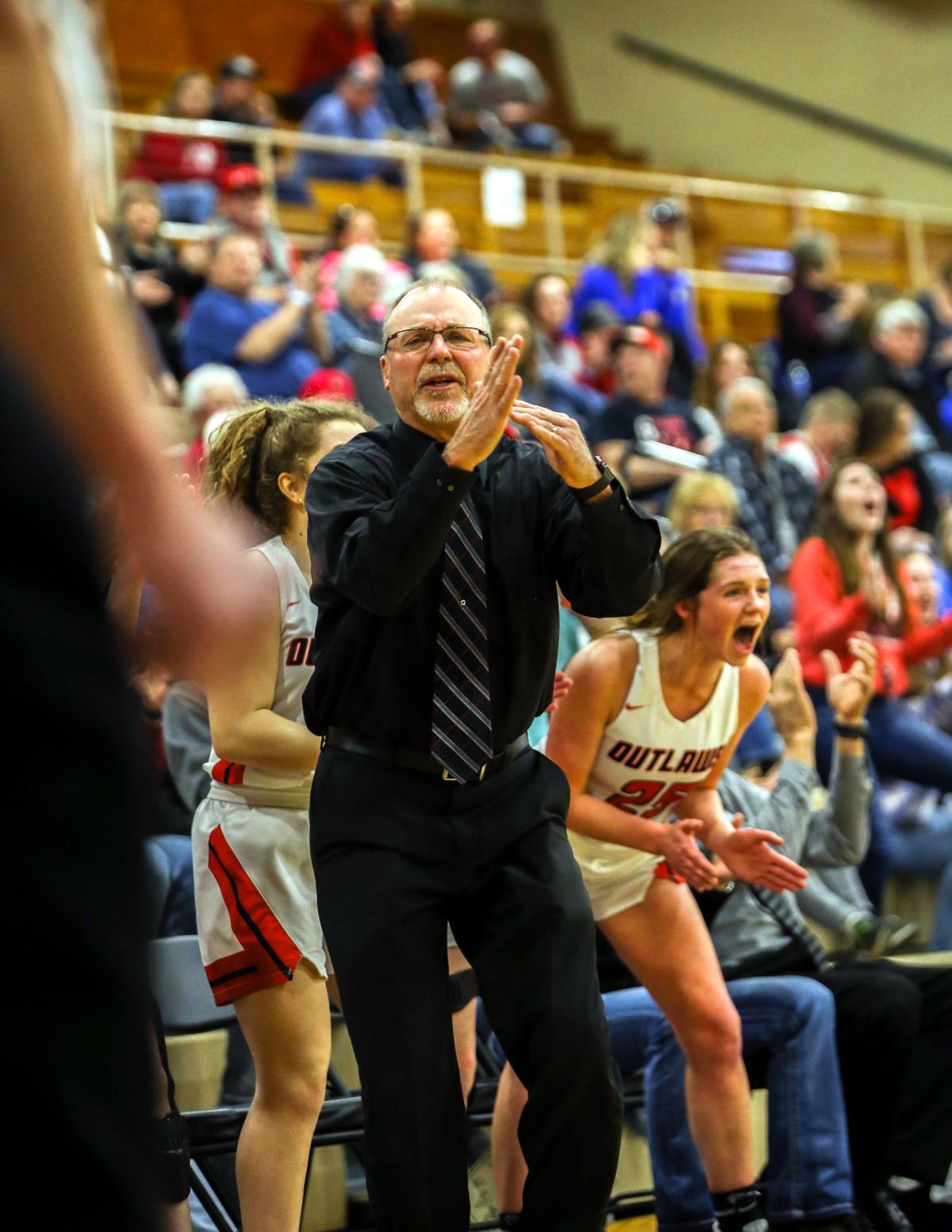 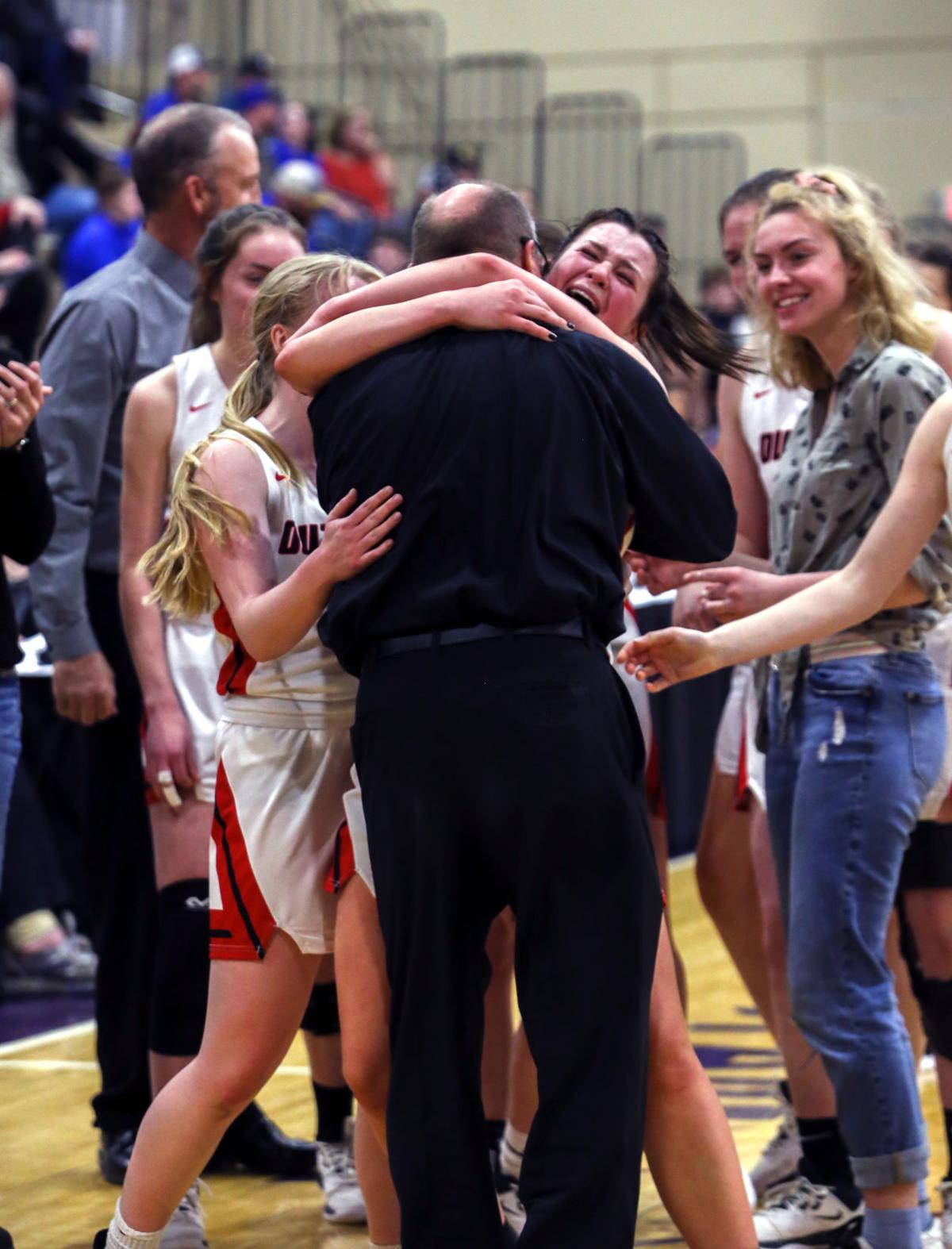 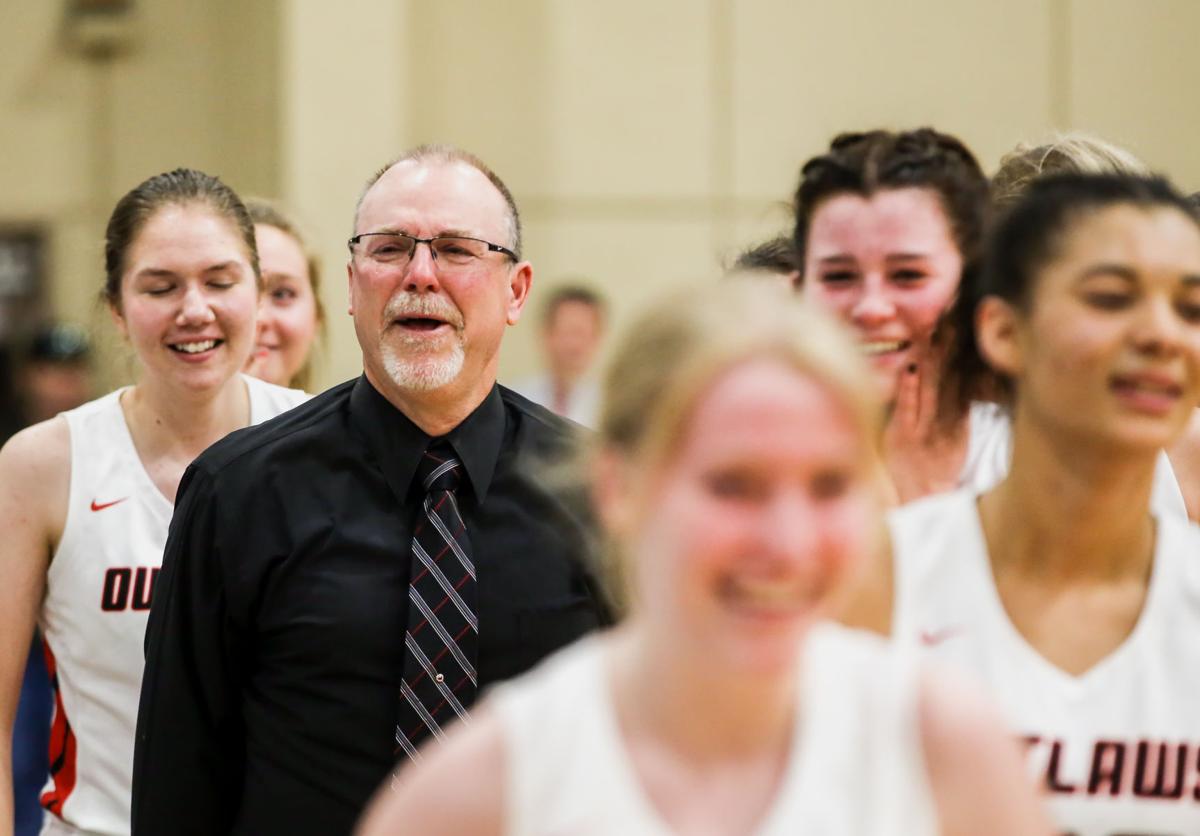 Mike Crawford used the word “blessed” several times in describing his basketball coaching career, one that at Enterprise High School has spanned 31 seasons, 758 games and — after last Saturday’s 40-38 overtime thriller over Heppner at the Blue Mountain Conference tournament — 500 victories.

The blessings, though, stem more from the hundreds of athletes he has worked with since the start of the 1989-90 season, his first leading the EHS girls basketball program.

Crawford, 61, joined an elite group in the state of Oregon with the latest milestone win, as he is just the seventh girls basketball coach in state history to win 500 games, and the fourth to win that many at one school.

Along the way, he’s guided the program to numerous state tournament trophies, including a championship in 1996, had players who now help him on the sidelines as assistant coaches and even has second generations of families who have played for him.

Crawford is actually in his 40th year as a high school coach and has coached much more than just basketball. During student days at  Oregon State University  he helped with the football program at Junction City High School and also  coached baseball for Willamette High School in Eugene.

Crawford  taught in Arlington following graduation from Oregon State, where he coached junior high football, was volunteer coach on the basketball team and was then hired as the head baseball coach, leading Arlington to a state semifinal appearance in 1982. While there, he worked with John Rogers in football and Lee Bittinger on the basketball sidelines, and both programs won state titles during the 1981-82 school year. He later took over as the head football coach when Rogers departed.

When he and his wife, Tammy, moved to Enterprise after she got a teaching job there, he coached football with Chuck Corak, worked with boys basketball coach Dick Quinn, and exchanged notes on philosophy with former Joseph basketball coaching great Gary Sather.

“They all shared the belief — and I believe it, too — that you gotta believe in what you’re teaching. You gotta sell it that ‘This is the way we’re going to do it,’” he said. “If you don’t believe, the kids aren’t gong to believe it.”

Lisa Farwell, Enterprise's volleyball coach, was a junior on the girls basketball team when Crawford took over the program at the beginning of the 1989-90 season.  She said that he sold the team on his ideas for the program from day one.

“I remember he came in with a lot of energy. He was excited to have the job and be a head coach. We bought in 100%,” Farwell said. “He was ready to implement some new things into the program.  That was exciting.”

By the mid-1990s, Enterprise had become a force to reckon with not only in the Wapiti League but in the state. In the 1994-95 season the team won 22 games, and in 1996 EHS won the state championship, taking a thriller over Santiam Christian 58-54.

That game holds a memory that to this day sticks with Aneliese Stein, who was a junior on that team. Enterprise held a two-point lead in the final seconds, and she had an opportunity for two free throws to ice the game.

“He told me right before I went to the line that he knew I could do it,” recalled Stein, who now is an assistant coach alongside Crawford at Enterprise.

Stein indeed hit both to seal the championship.

Under Crawford's direction, Enterprise has won 20 games or more 14 times, been to the state playoffs 17 times and claimed 10 placings at state in the last three decades. Only nine times has EHS had a losing season under Crawford.

Crawford's coaching success at Enterprise is not limited to the hardwood, though, as he coached the boys golf program to four state championships in a five-year span from 1999-2003.

Over and above what his teams have achieved on the hardwood in the last three decades, it’s the relationships he builds with his players that stick with them.

“He’s there for them every way he can be,” Stein said. “He’s there in their career and involved after their career. He doesn’t just care about how you perform on the court. He cares about the individual. He’s one of those people who see the positive in people all the time. If people get down on the program or on a player, he backs them up.”

The same then as now

Many coaches may change over the course of a career, especially one that spans three decades.

Yet athletes who played for Crawford in his early years said they see a lot of the same now as they did then.

“Even back in the fall of ’89, he was similar,” Farwell said. “He’s a student of basketball, loves watching film, has always been that way.”

“One of his greatest attributes is he seems to keep a level head,” said Chelsie Gray, who played for the ’96 title team, and that has played a part in the trust he fosters in his teams. “He’s got a good relationship with the girls. That’s carried through the years. He cares about them. The girls want to play hard.”

The coach said where he is different now than in 1990 is perhaps obvious after 758 games — experience.

Farwell and Gray both have a unique perspective in that they played for Crawford and now have daughters playing for him.

For her, it also goes beyond the basketball court.

“He cares about my girl as a person, as a student, supports her during volleyball (and) softball,” she said. “That’s what I want.”

Gray has two daughters on the team — Ashlyn, a senior, and Jada, a sophomore — and her older daughter, Riley, who graduated in 2018 also played for Crawford.

“Just to play in the same community has been so awesome, (with) the familiarity with the coach. He knew how I played and that's how I encouraged my girls,” Chelsie Gray said. “I appreciate him supporting my kids and bringing out the best in them. He’s had three of my girls and they all love basketball.”

Claire Farwell called it a “blast” to play for the same coach as her mom, and she said the two often joke about the differences in the seasons when they played.

“It’s kinda crazy to think that he coached my mom, and he has mentioned that he does see similarities between the two of us,” she said. “Crawford can remember everything about almost every game since he coached my mom the first time, and hearing those stories have been really encouraging to push us as a team.”

Getting the 500th victory was a challenge. Enterprise was off offensively — the Outlaws scored just eight points in the first half — against a team in Heppner that it had blown a late lead against in the prior meeting.

Ashlyn Gray admitted the team felt pressure, because the players knew the 500th was on the horizon.

“We made a big deal of it,” she said. “That game was super stressful. It was one of those games you feel like you’re not going to be able to pull off.”

The Outlaws rallied in the fourth quarter to force overtime at 33-33, then made the key shots late to earn the victory, which set off tears of joy throughout the Pendleton Convention Center. EHS fans following the win also held up signs commemorating the 500th victory.

“That last game for the 500th they had to fight so hard. It was just an exciting experience,” Chelsie Gray said. “Crawford was emotional. I got emotional."

Crawford himself actually called the victory a relief. He said the players felt pressure to get it despite his attempts to diffuse the stress.

She knew, though, that it meant a lot to Crawford.

“It was important to him. You get to that point in your career, he deserves every one of those wins. I’m proud of what he’s accomplished.”

It’s one he won’t forget anytime soon, either, saying: “This overtime game against Heppner last weekend will stick with me forever.”

How many more wins there will be in Crawford's career remains to be seen. He said he considered at one point wrapping up his coaching career once he got to 500, but he also said he’s received a “new boost of energy” from the fact that his son, Kyle, is now coaching the boys program.

For now, he said, he’ll be on the sidelines again next year “and probably the year after that.”

“I’ve had some incredible experiences (and) I’m sure I got some more coming,” he said.