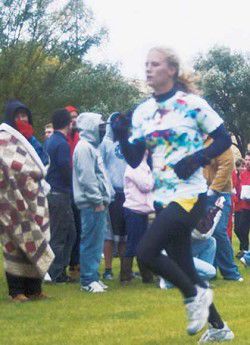 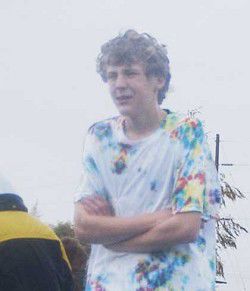 The wind hollering across the Alpine Meadows Golf Course "was like a brick wall," according the Joseph senior runner Lena Moro.

Moro's teammate, Enterprise sophomore Madison Ribich, fought the harsh weather conditions about as much as she contended against the other 13 cross country runners. Ribich won the girls' race at Friday's Enterprise Invitational.

"It feels really good because this was our home meet, and I was really excited for it," Ribich said.

Early on in the girls' race, the front of pack - Ribich, teammates Moro and Colby Patton as well as Cammi Whited of Union and Alaina Thompson of Weston-McEwen - separated from the rest.

At the midway point, however, Ribich left everyone behind. Though it meant she was winning, it also isolated her.

"I liked it when I had Lena next to me," Ribich said. "We pulled for each other. That is part of teamwork. At other meets, Lena and Colby are there to cheer you on. If you fall back, you need that."

Ribich got so far ahead of everyone (she outpaced second-place Whited by 25 seconds) that she never should have worried, but coming down the hill on the west side of the course, she suddenly became terrified.

Going up the hill, Ribich had seen that Whited was a long distance behind her. On her way down, a spectator warned her otherwise.

With Ribich, Moro, Patton, Samantha Hunter and Jessy Osterloh, the Enterprise-Joseph girls ran with a full team - Enterprise had not fielded a complete team in four years; Joseph had no program last season - and they beat Union in team scoring for a meet victory.

Going into the second half of the season, Friday's victory gives the local girls some extra drive, as they will soon start practicing twice a day in preparation for the district meet.

"Some teams emphasize the early meets. They talk about starting strong, and then they stay at that level," Enterprise-Joseph coach Dan Moody said. "We always focus on the (district meet), getting better as the season goes along. We've improved so much."

Nevertheless, running at Alpine Meadows was a nightmare. The temperatures plunged around the freezing mark, constant drizzle soaked the course and strong winds compounded the misery. Moody said the weather for this year's home meet was by far the worst in his experience.

The cross country season extends into late October and early November, but Ribich said that she had never competed through anything colder than Friday. Moody compared it to a blizzard that struck at a meet in Burns when he was in high school.

While the girls ran the 5,000-meter trail around the local golf course, the rain held off but that didn't make it any easier. Moro, who earned third place points for E-J, said that the wind around the course's Hole 7 "was like a brick wall."

In the minute between the end of the girls' race and the start of the boys, the deluge came down.

As a team, the E-J boys came in third place, behind both of Union's squads. Patrick Boyd was the top local finisher, taking sixth place. Teammates Matthew Hurley and Fayira Touray came in No. 11 and 12, respectively.

Get to know the Wisconsin Badgers' 2021 football recruiting class