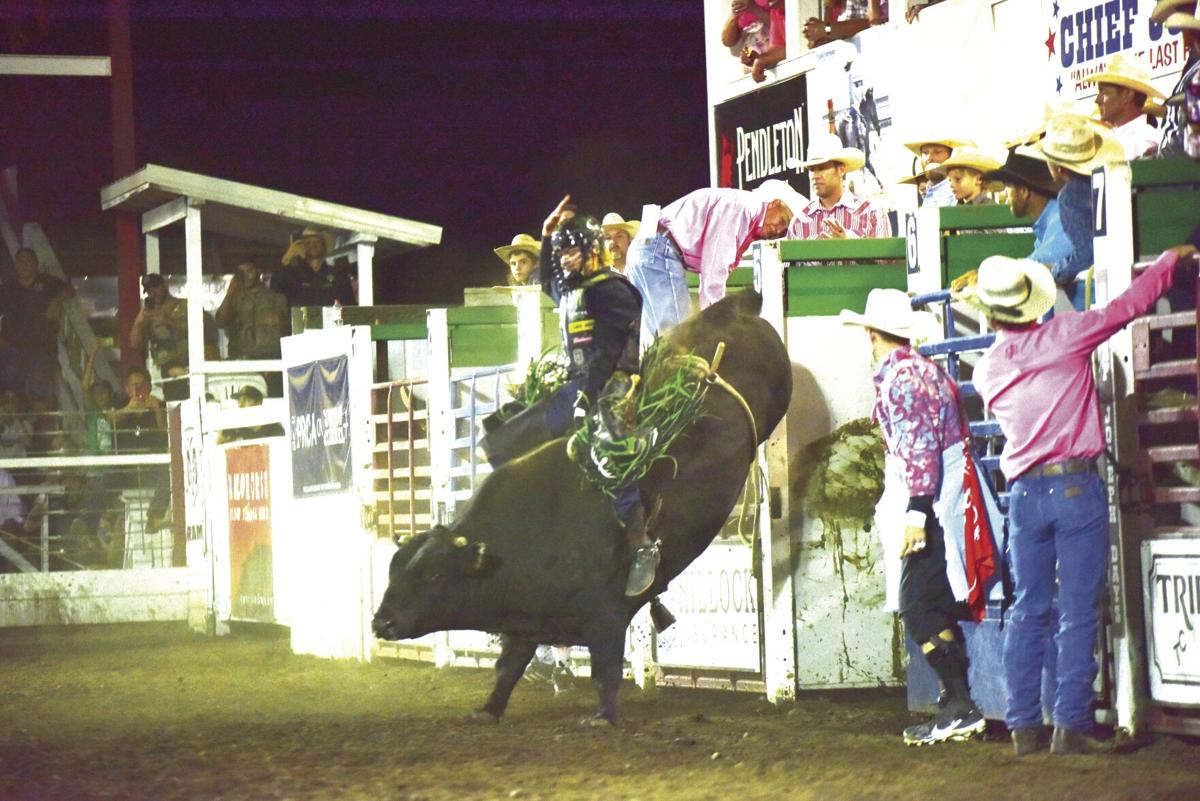 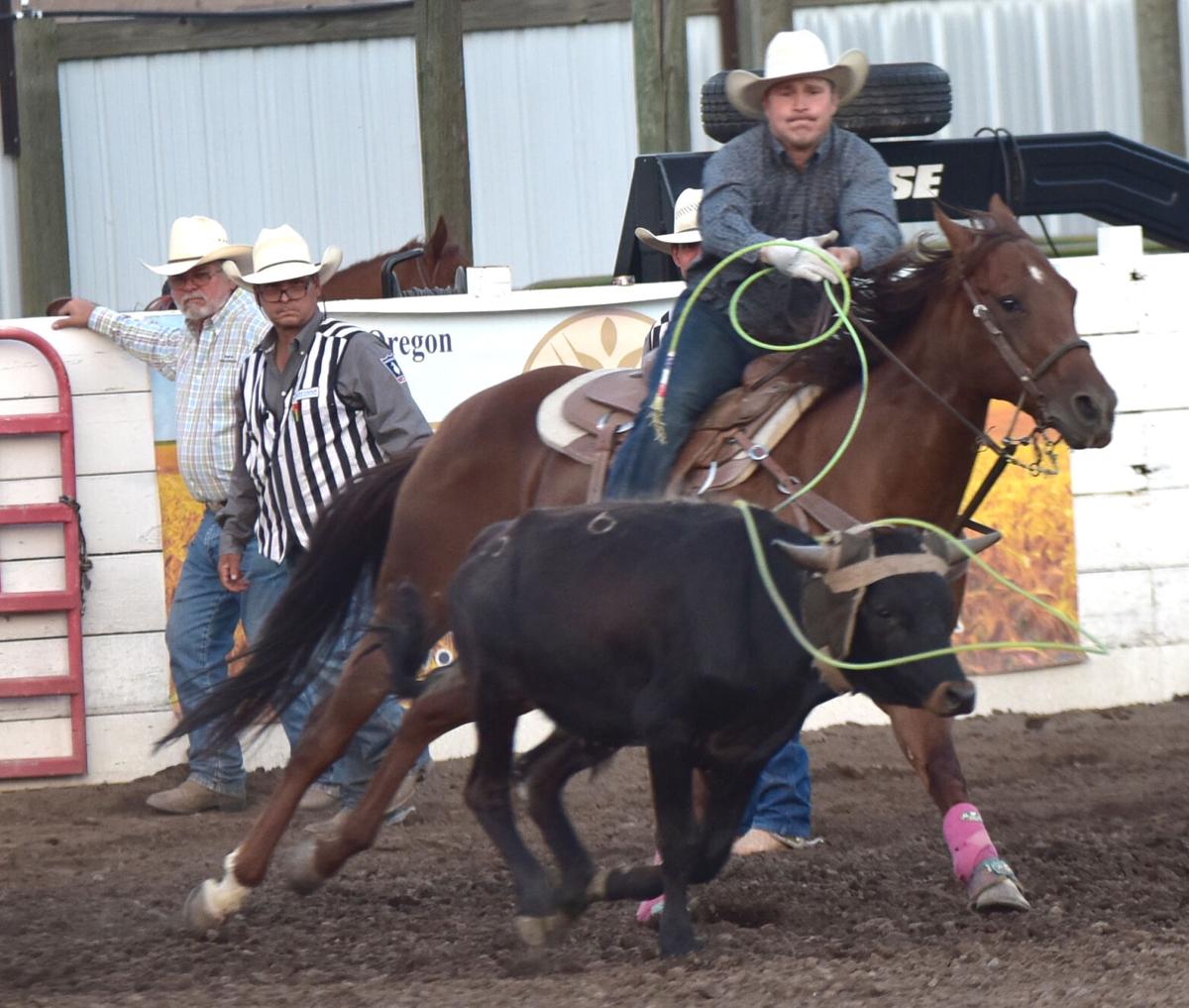 Ryan Powell throws the lasso at a steer during team roping at Chief Joseph Days on Thursday, July 29, 2021. 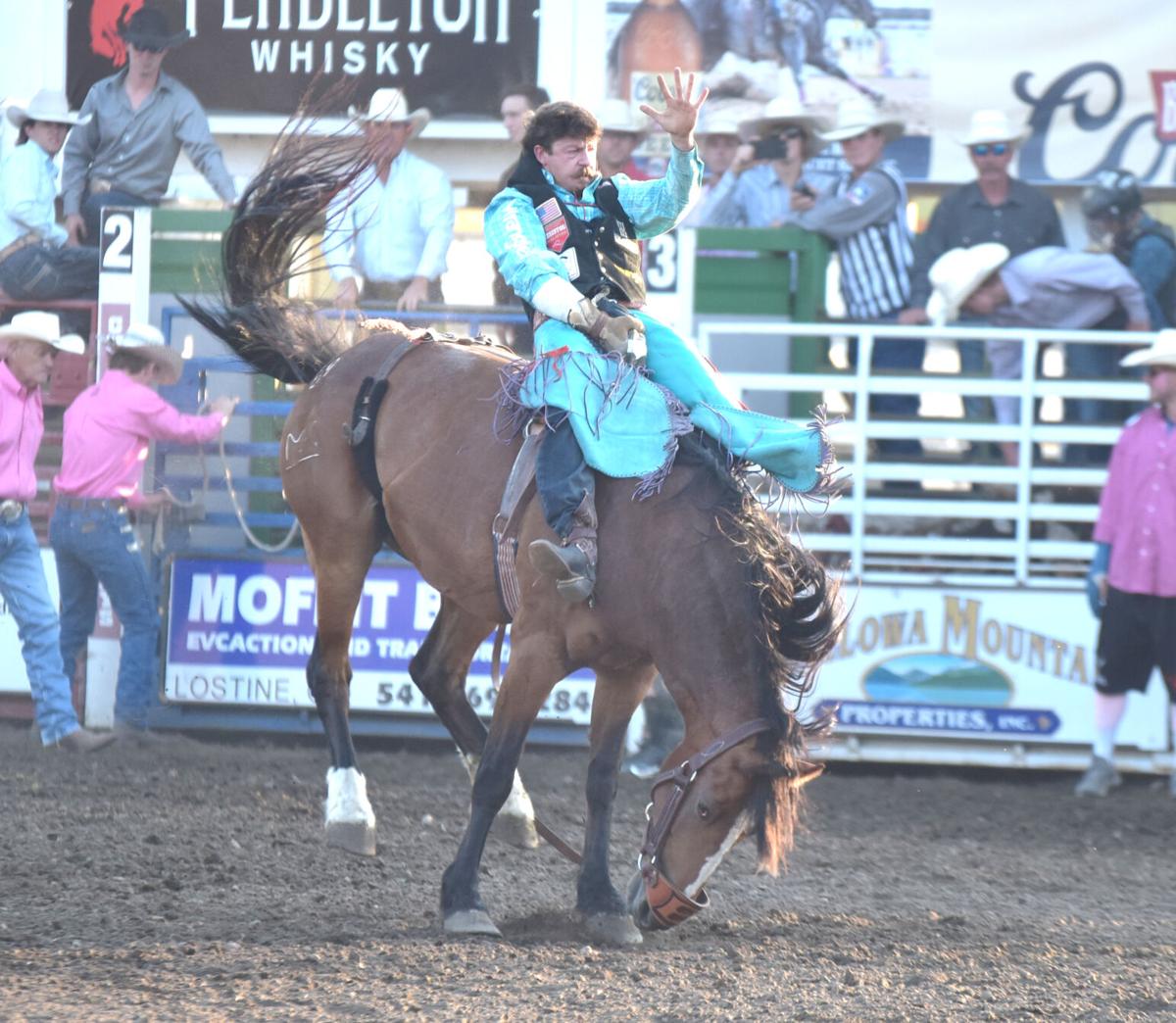 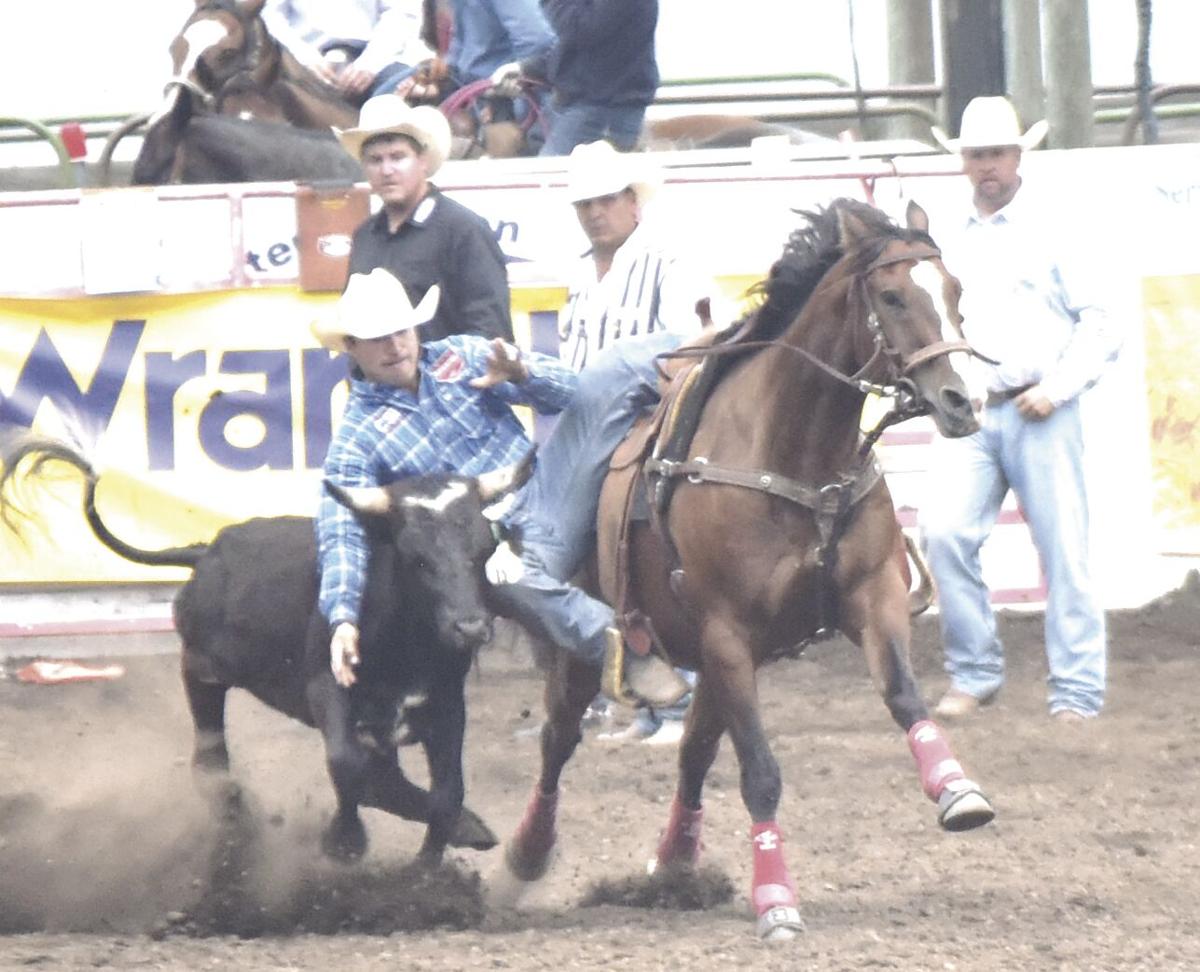 Baker City's Jesse Brown repeated as all-around champion in steer wrestling at Chief Joseph Days with a combined time of 10.1 seconds on two steers. He also had the fastest time of the 2021 rodeo at 4.2 seconds.

Ryan Powell throws the lasso at a steer during team roping at Chief Joseph Days on Thursday, July 29, 2021.

Baker City's Jesse Brown repeated as all-around champion in steer wrestling at Chief Joseph Days with a combined time of 10.1 seconds on two steers. He also had the fastest time of the 2021 rodeo at 4.2 seconds.

He repeated at the all-around steer wrestling champion in 2021, winning in the first round with a time of 4.2 seconds and posting the best time for two takedowns — 10.1 seconds — during the final night of the 75th Chief Joseph Days on Saturday, July 31.

“This evening my steer was a little bit stronger (than his first attempt) and I knew I had some time to work with to win the average. I just had to get him down, I think, quicker than 7 (seconds) or something like that.”

Brown’s time of 4.2 seconds during a slack performance earlier Saturday gave him the top time in the rodeo and put him in a good position to win the all-around. His time of 5.9 seconds was seventh in the second round — and out of the money — but he finished more than one second ahead of Justin Kimsey for the all-around title, and pocketed $2,375 between the Round 1 win and the overall title.

In 2019, Brown, a product of nearby Baker City who is ranked third in the world in steer wrestling in 2021, tied for first in both rounds and took home the honor of all-around.

“Joseph is one of my favorite small rodeos, one of my favorite rodeos period, honestly,” Brown said. “Being kind of close to home, a Columbia River Circuit rodeo, the atmosphere, and the view, it’s great. I love Joseph. That’s pretty cool to go back-to-back.”

A second-round win was claimed during Saturday night’s final performance in team roping, with Hayes Smith and Justin Davis recording the top time of the rodeo in 4.7 seconds and taking home more than $1,600.

The team of Jason Stewart and Jason Duby won the all-around team-roping championship, netting a time of 12.2 seconds on two animals — including 5.7 seconds in the second round for their best time. They won $2,488 as the all-around champions, and more than $1,200 for their placing in the two rounds.

The championship in bull riding — and several other events — ended up being claimed on the first night, as an 86-point ride by Wyatt Covington on Wednesday night held up as the top performance of the weekend and won him a check of nearly $2,500. Only two other riders held on the entire eight seconds — Jordan Spears, who also rode Wednesday and finished with an 85, and Paul Coppini, who finished with an 83.5 on Friday night. Interestingly, both Spears and Coppini scored their rides on board the same bull, Spike the Punch.

Local fan favorite and great-grandson of Harley Tucker, Derek Kolbaba, just missed a ride Thursday that likely would have catapulted him to his third CJD title, as he turned in a time of 7.26 seconds in his ride on Side Hustle, though it was easily the top performance of Thursday night with the other four riders getting dismounted quickly.

Also won on opening night was saddle bronc riding. Spencer Wright edged his nephew, Rusty, to not only win family bragging rights and the first night, but eventually, the whole rodeo with a score of 85.5. Rusty Wright took second with a score of 83, Kade Bruno placed third with an 82.5, and Mitch Pollock was the only other rider above 80, turning in an 82.

Bruno’s win earned him the Harley Tucker Rodeo Series Award, which is given to the contestant who scored the most points and had entered in the Eastern Oregon Livestock Show, the St. Paul Rodeo, the Elgin Stampede and Chief Joseph Days.

Rachelle Riggers was the barrel racing champion, taking the win with a run of 17.51 seconds on Friday night. She won more than $2,500 against a field of more than 50 riders and was among six contestants who ran the cloverleaf pattern in 17.60 seconds or faster. Jessie Telford placed second with a time of 17.53, Bailey Cline was third in 17.55, Cheyenne Allan placed fourth in 17.59, and both Jordan Minor and Emily McKinnies tied for fifth in 17.60.

Three different Soreys won the three rounds of steer roping: Tom Sorey the first round in 15.2 seconds, Pake Sorey the second round in 13.7, and Trent Sorey the third in 14.2.

It was Roger Nonella, though, who won the all-around in steer roping as the only contestant to post a time in all three rounds, with time on three steers of 51.6 seconds.

Westyn Hughes won the all-around tie-down roping championship, turning in a time of 18.3 on two calves. He turned in times of 9.8 seconds and later of 8.5 seconds to also place in both rounds, and between the round placings and the all-around title won more than $5,400 on the weekend.

The all-around cowboy was Cully Stafford, who competed over the weekend in tie-down roping and team roping. His best effort in the first round of tie-down roping placed him in fifth in the round, and he ended up eighth overall on two calves. He and team-roping teammate T.C. Hammack also ended tied for second in the first round of the event in 5.8 seconds, and the duo took eighth overall in 17.2 seconds on two. Stafford took home $1,810.

Editor's note: This story has been updated.