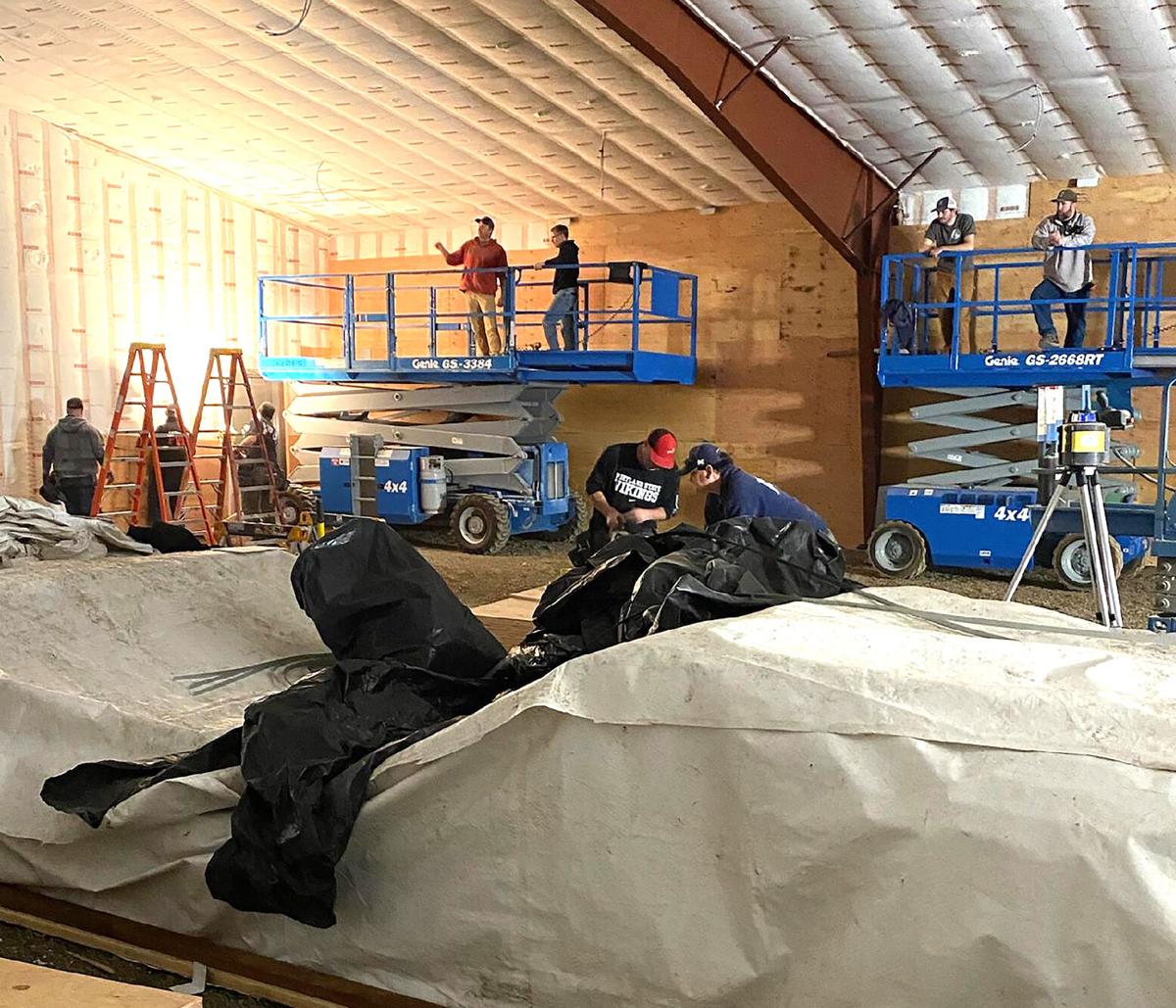 Volunteers gathered Saturday, Jan. 16, 2021, to continue work on the indoor city recreation center near the baseball fields in Enterprise. The center is expected to be ready for use by March 1.

The new recreation center near the baseball fields in Enterprise is about 90% complete and expected to be fully functional by March 1, 2021, thanks to a grant, donations and volunteer labor by locals.

Volunteers gathered Saturday, Jan. 16, 2021, to continue work on the indoor city recreation center near the baseball fields in Enterprise. The center is expected to be ready for use by March 1.

The new recreation center near the baseball fields in Enterprise is about 90% complete and expected to be fully functional by March 1, 2021, thanks to a grant, donations and volunteer labor by locals.

ENTERPRISE — The new recreation center near the Jensen Ball Fields in Enterprise is 90% complete and expected to be fully functional by March 1, according to Kate Fent, a spokeswoman for the Wallowa County Athletic Network that has been behind the project.

The project will provide an indoor facility for young people to practice sports during inclement weather. Anyone in the community will be able to use it, Fent said. She said the network and the city are working to create a use agreement and schedule.

County Commissioner John Hillock, who also has been involved in the project, said it will include indoor batting cages, places to practice soccer skills and more. The floor will be covered with artificial turf, he said.

“It’s just a really positive effort by local persons, including some who stepped up and volunteered the cash needed to finish the project, which was a sizeable amount,” he said.

He noted that the Enterprise Volunteer Fire Department turned out Saturday, Jan. 16, to install plywood on the walls.

“It’s always a good thing … we got asked to back in September,” he said. “We thought it would be earlier, but it worked out.”

Karvoski said this isn’t the first time the firefighters have helped on a community project.

“We’ve helped out on other projects over the years, but this is the first time we’ve helped on this one,” he said. “We can’t wait for it to get done.”

Built on city property and owned by the city, the project was largely funded by a $250,000 grant the city received from the Oregon Department of Parks and Recreation. Another $130,000 in donations also were received, Fent said. She added that in-kind labor and other types of donations total close to $75,000, including multiple discounts from contractors and volunteer labor.

Everyone involved has been amazed at the volunteer effort that have made the rec center happen.

“This project wouldn’t have happened without the whole community being involved,” Karvoski said.

“I just thought it was a really positive thing when we’re in an environment with so many negative things,” he said.

“I cannot begin to described how thankful I am to the community’s generosity and investment in this facility,” Fent said. “I am left speechless.”

She went on to describe the volunteer efforts involved.

“This project began with a group of volunteers who met multiple nights a week designing, budgeting and formulating a plan,” she said. “The city of Enterprise’s willingness to take on the project and apply for the grant, the county commissioners help with the Oregon Parks Presentation, the countless hours of time put in by the Enterprise Public Works Department and the generous time put forth by Troy Farwell, Jim Nave and John Hillock to manage the actual construction.”

Many others also were involved, she said.

“Court Fent drove to Pendleton on a moment’s notice to pick up critical parts to finish the installation of the donated heating systems, not to mention a sweet deal found by a parent on used turf and a local family donating a truck and driver to haul it in the middle of winter,” she said. “The community stepping up in a matter of hours to pledge cash donations to pay for the turf. Special cash donors. The countless Saturdays spent finishing the inside of the building. A quick call to Ace Hardware on a Saturday afternoon to get 60 gallons of paint shaken and delivered in less than an hour. One day of hard work from the Enterprise Fire Department to cover the insulation with plywood.”

Fent said the volunteerism has left her amazed.

“Wow! I live in the most amazing place in the world. In the midst of COVID, and hard economic times, this community still goes above and beyond,” she said. “I am grateful to be part of this amazing community.”