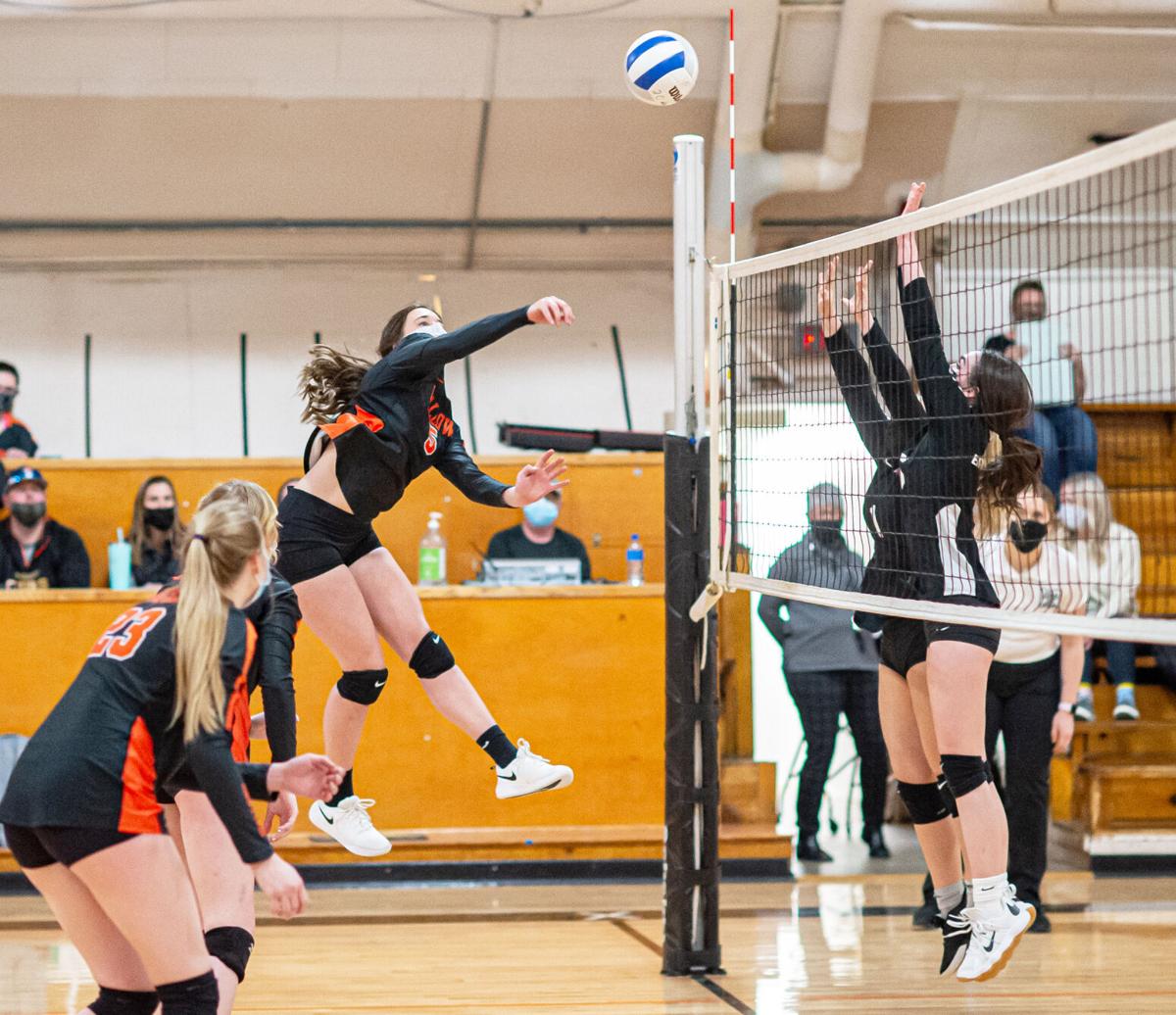 Wallowa’s Haley Brockamp puts a kill attempts past the outstretched arms of two Enterprise defenders during a match Tuesday, March 9, 2021. The Cougars swept the Outlaws in the home matchup.

Zac Knapp was the winner in the dual meet with McLoughlin Saturday in Milton-Freewater.

Wallowa’s Haley Brockamp puts a kill attempts past the outstretched arms of two Enterprise defenders during a match Tuesday, March 9, 2021. The Cougars swept the Outlaws in the home matchup.

Zac Knapp was the winner in the dual meet with McLoughlin Saturday in Milton-Freewater.

“I keep seeing improvement from these girls each game,” Wallowa head coach Janea Hulse said. “The unforced errors are getting less and less. I am seeing the girls come together and working more as a team as each day passes.”

Shanna Rae Tillery led the offense with 13 kills, and the team was strong on the service line, Hulse said.

“Our middle blockers are coming on strong and making a huge difference in our offense,” Hulse said. “I am very happy with their progress.”

Jada Gray had nine kills and four aces to lead the Outlaws, and Claire Farwell recorded 11 digs on defense.

Liz Rowley led the offense with four kills. Claire Farwell had a big day from the service line with five aces, and Rosie Movich-Fields had six digs.

Sabrina Albee had eight kills and a pair of blocks, and Cooper Nave had five kills. Joseph also saw an impressive serving run during the match as Aimee Meyers recorded 24 straight service points.

“The girls played together this weekend and are beginning to click,” head coach Jill Hite said. Sabrina Albee and Annabelle Russell showed great leadership on the floor both days. It’s exciting to see a group of girls begin to click and play together.”

“We are improving with every set,” head coach Lisa Farwell said. “My girls are gaining confidence as they gain experience and the lineup is starting to gel. Every one of the seven players who played in these three matches are contributing to the team effort, and their attitude as a team is one of not focusing on the last mistake, but looking forward to the next play, the next serve, the next set. I have to single out Asiya Salim, who’s playing a new role this season as our full time setter and killing it. Her hustle and work ethic are inspiring.”

Jada Gray led the offense with 13 kills. Savannah Vaughn had 13 digs and served up two aces, and Claire Farwell also had two aces.

Shanna Rae Tillery had a balanced match with seven kills, six aces and five blocks. Libby Fisher had eight kills and five aces, and Haley Brockamp had another solid defensive match with 10 blocks.

Wallowa Valley coasted to victory in the Pioneer Run — a dual race against McLoughlin — on Saturday, March 13, in Milton-Freewater.

Wallowa Valley returns to the course Thursday, March 18, at the Mustang Invite in Heppner.