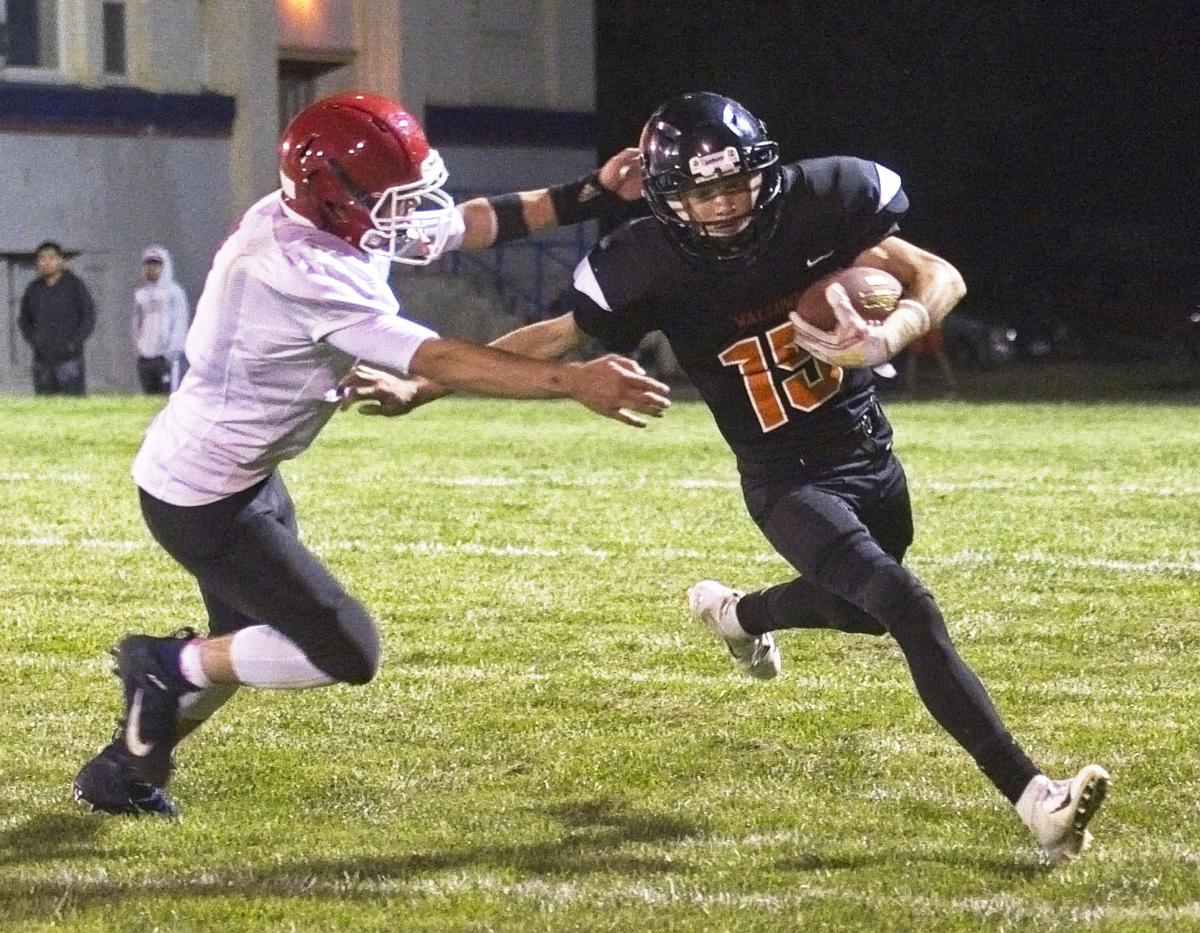 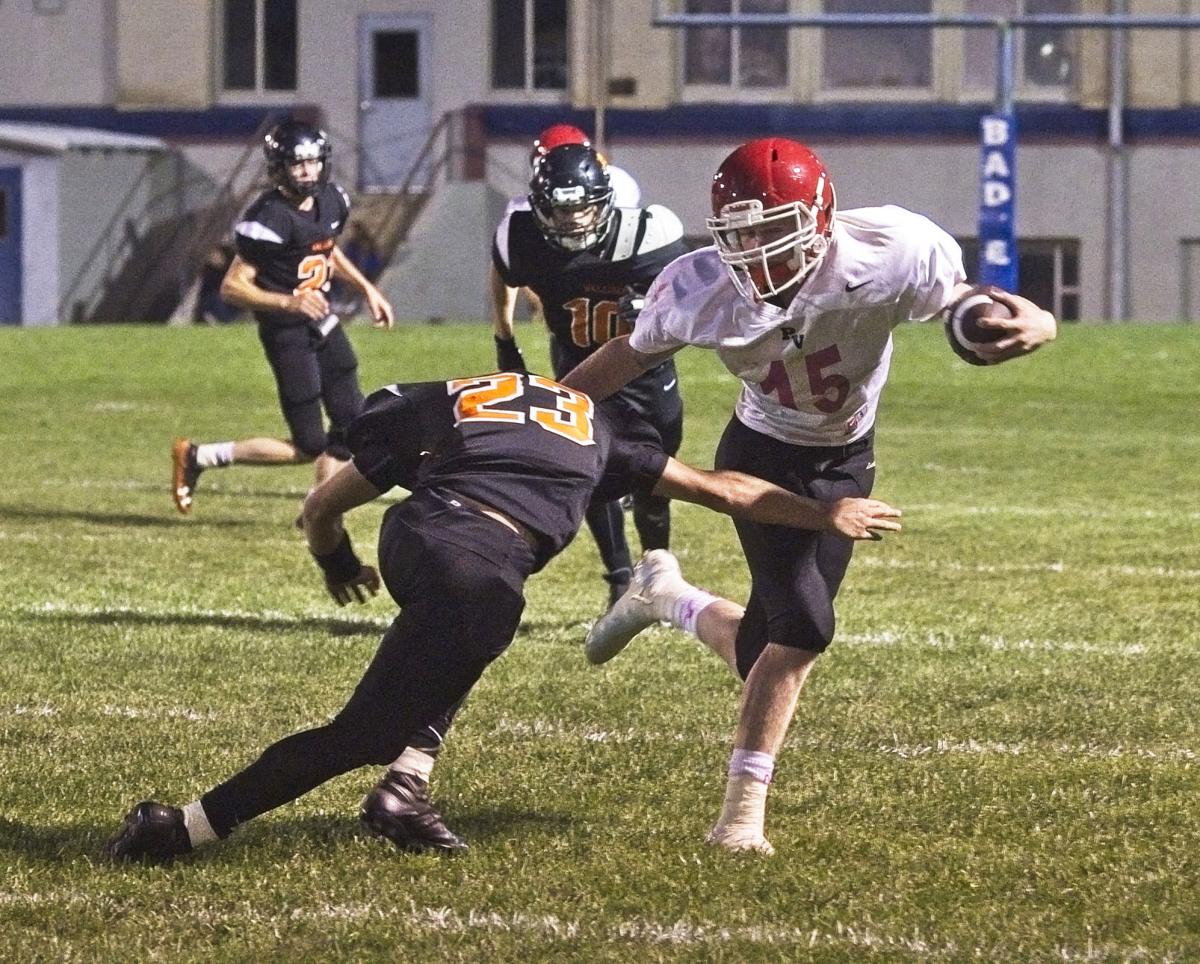 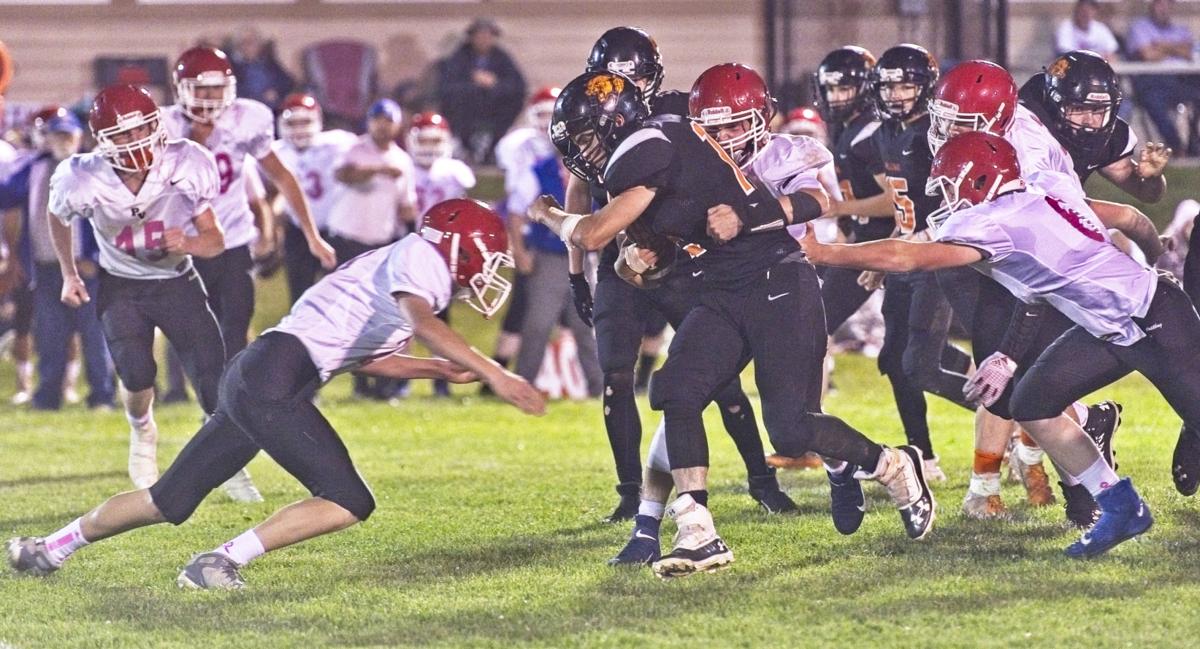 Cougar running back Tristin Bales carries the ball for a 6 yard gain in the second quarter. 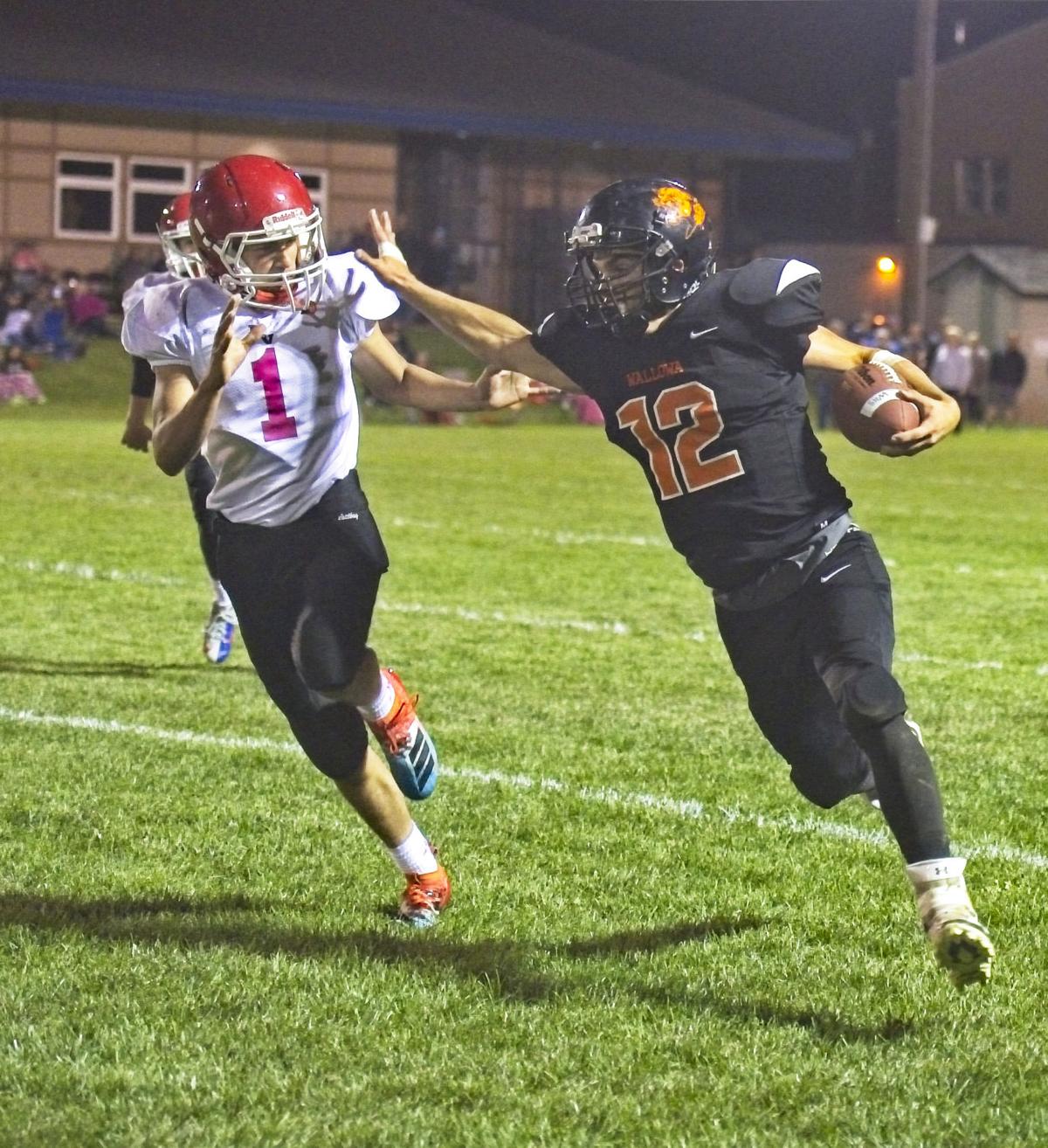 Running back Tristin Bales turns the corner for a big gain in the second quarter. 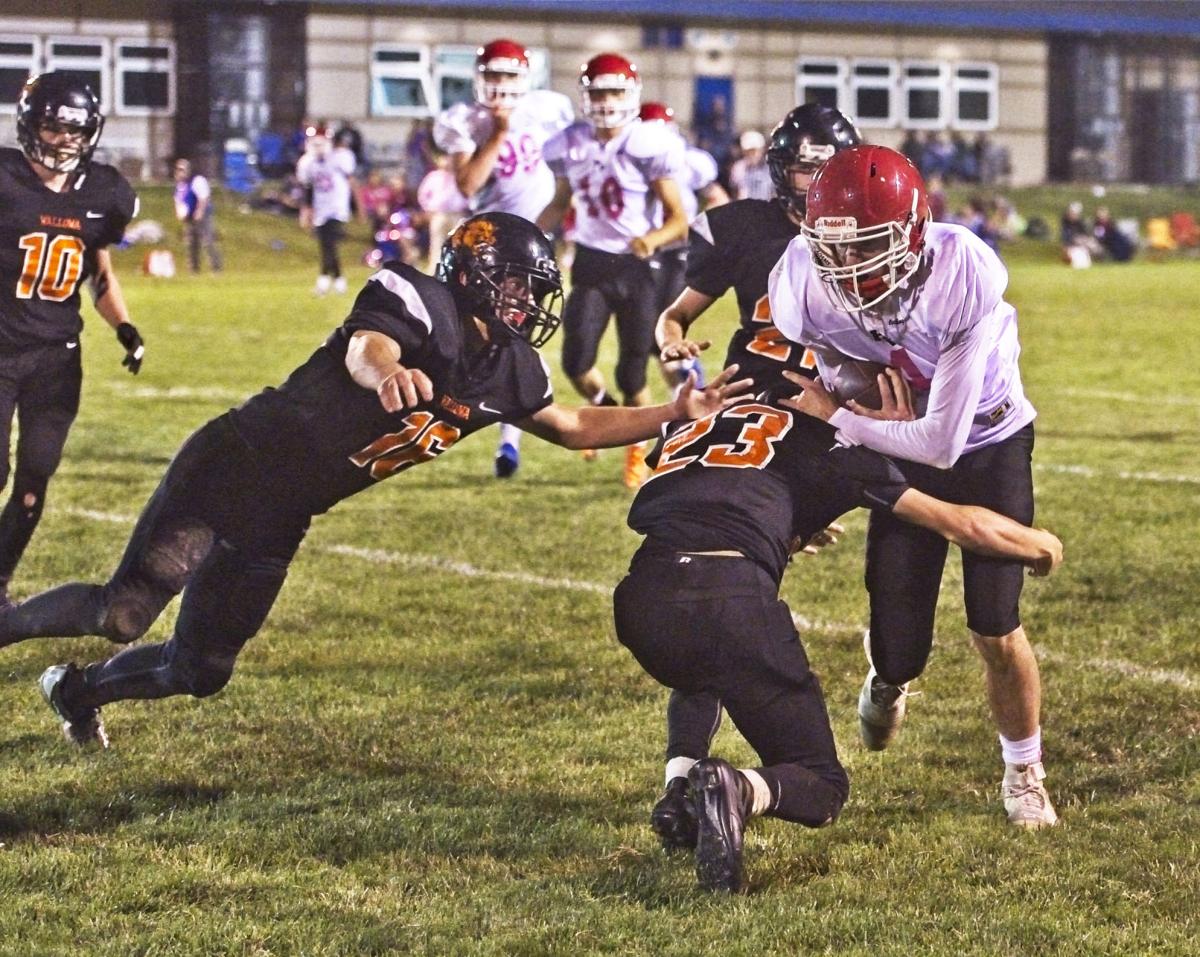 Justin Bales (#16) and Mason Moore stop the Badger's ball carrier in his tracks. 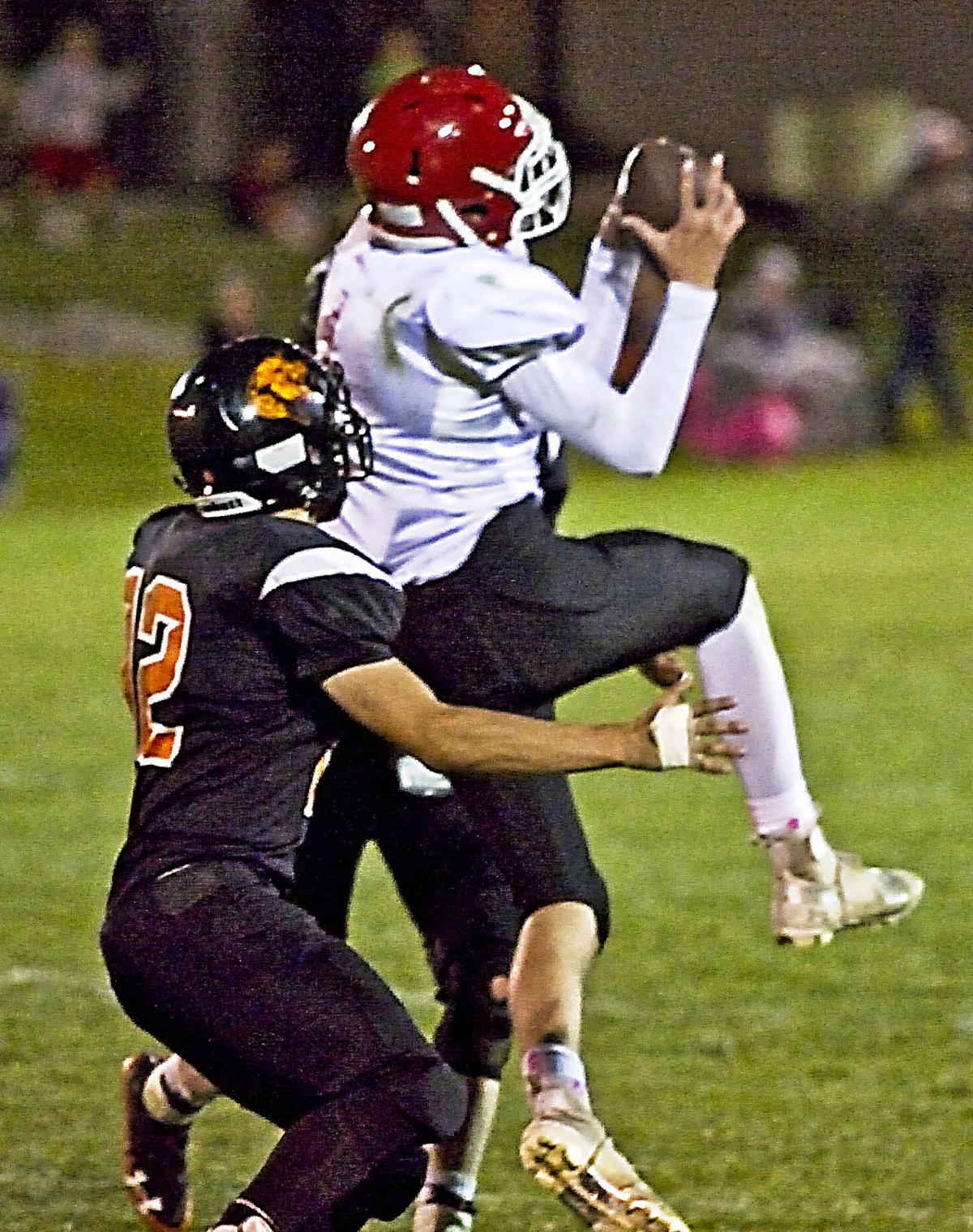 Linebacker Tristin Bales times his tackle of a Badger receiver. 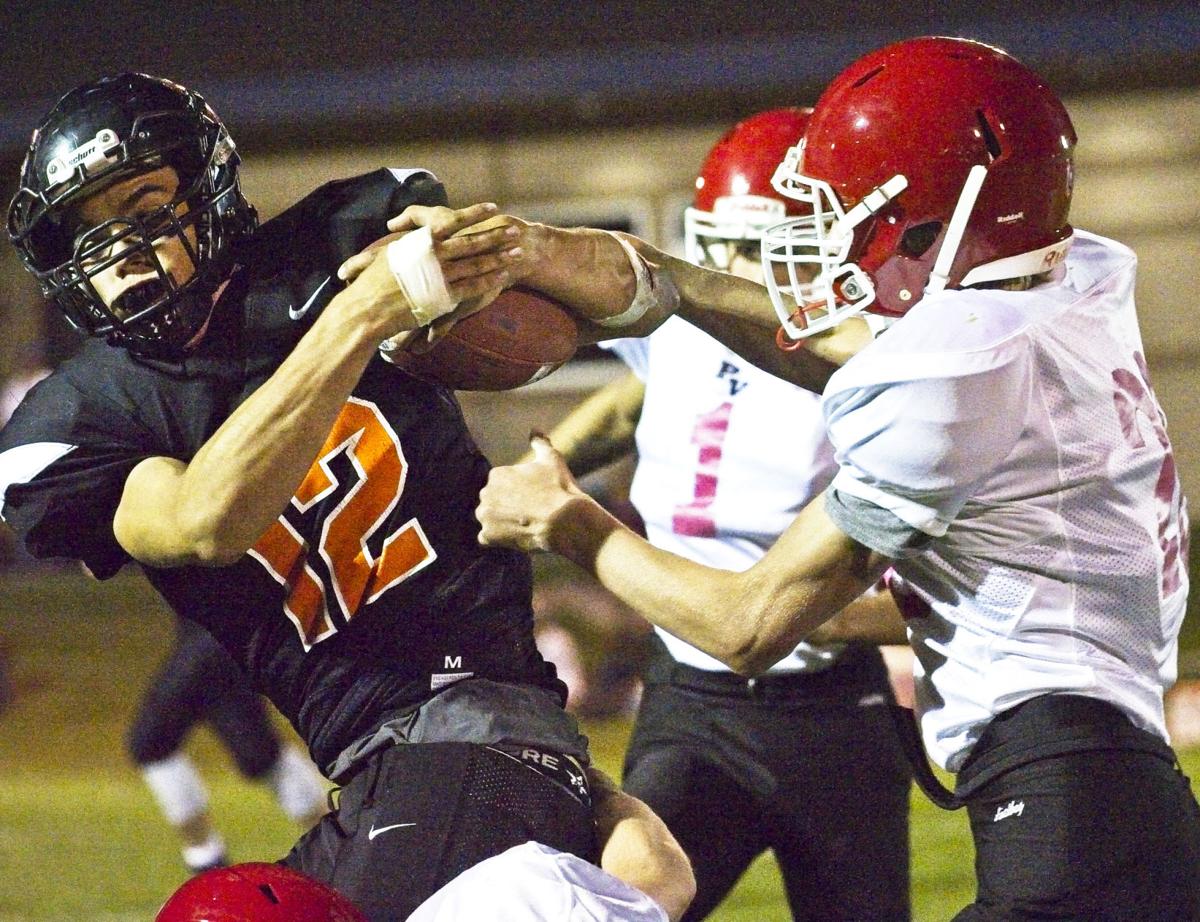 Running back Tristan Bales hangs onto the ball as a Badger player tries to strip the ball during a tackle.

Cougar running back Tristin Bales carries the ball for a 6 yard gain in the second quarter.

Running back Tristin Bales turns the corner for a big gain in the second quarter.

Justin Bales (#16) and Mason Moore stop the Badger's ball carrier in his tracks.

Linebacker Tristin Bales times his tackle of a Badger receiver.

Running back Tristan Bales hangs onto the ball as a Badger player tries to strip the ball during a tackle.

In a difficult loss, the Wallowa Cougars dropped their league opener to arch-rival North Powder Badgers 26-38 in an away game on Friday night. In a hard-fought matchup, both teams were slapped with numerous penalties. However, Wallowa had two touchdowns called back by penalties, and senior lineman Ricky Prince was ejected from the game late in the third quarter for a face-mask call that included additional unsportsmanlike conduct.

“We have a lot to work on,” said Cougars coach Matt Brockamp. “It’s a team of young kids. They played hard.”

Tristin Bales scored three of the Cougar's touchdowns (four if you count the call-backs) on pass receptions and runs, and Mason Moore chalked up the other two.

The Badgers scored early in the first quarter to lead 8-zip, and then scored again on a long run, but the Cougars thwarted their 2-point conversion. On the next possession, Wallowa’s march up the field appeared successful, but was called back due to an off-sides penalty. A 25 yard pass from Lute Ramsden to Tristin Bales and sprint into the end zone put Wallowa on the scoreboard 8 to 14. Wallowa held North Powder to small gains, and another long pass to Bales boosted the score to 14-14. Late in the first half, Wallowa took the lead with a touchdown pass to sophomore tight end Ryder Goller, ending the half on the top end of a 20-14 score

"We ran the football well in the second quarter and got things rolling a bit," Coach Matt Brockamp said. "I thought we were going to be all right. It's a football game we should have won."

However, the Cougars could not hold onto the lead in the second half. Badger quarterback Reece Dixon proved an accurate passer, with tight end Kaden Krieger, his favorite target. Badger running back Dominick Grende was successful in running the sidelines and slipping through Cougar defense even when he seemed to be stopped.

Coach Brockamp noted that an event early in the third quarter contributed to the Cougars' downfall: Lineman and senior Ricky Prince was ejected from the game after a facemask penalty and unsportsmanlike conduct.

"It shocked our young kids, and it shocked us as coaches," Brockamp said. "It was a very poor choice by a kid, and he's dealing with the consequences of that, moving forward." The coach related that he held a team meeting to address the situation when they returned to the school at midnight. In the end, the player was removed from the roster.

Penalties, especially illegal motion and off-sides exacted a heavy toll on the Cougars.

Brockamp praised the young squad for their performance and noted the 19 of 40 aerial performance of freshman quarterback, Lute Ramsden.

"He's been right in there close to 50 percent in both his games; he's going to be a phenomenal quarterback," the coach said. "We did miss a few throws, and we've got a few things to cleanup."

Bales led the team in rushing with 83 yards on nine carries while wait for it ... 144 yards receiving on five catches. Lute Ramsden stacked up 28 yards on six carries and brother, Zeb, snatched four passes for 59 yards while Zeb Hermens had two touches for 20 yards.

Brockamp said the team will work hard on improving their game before the Cougar's league home opener versus Elgin on Friday, Sept. 20.

The loss left the Cougars 0-1 in league play and 0-2 overall.