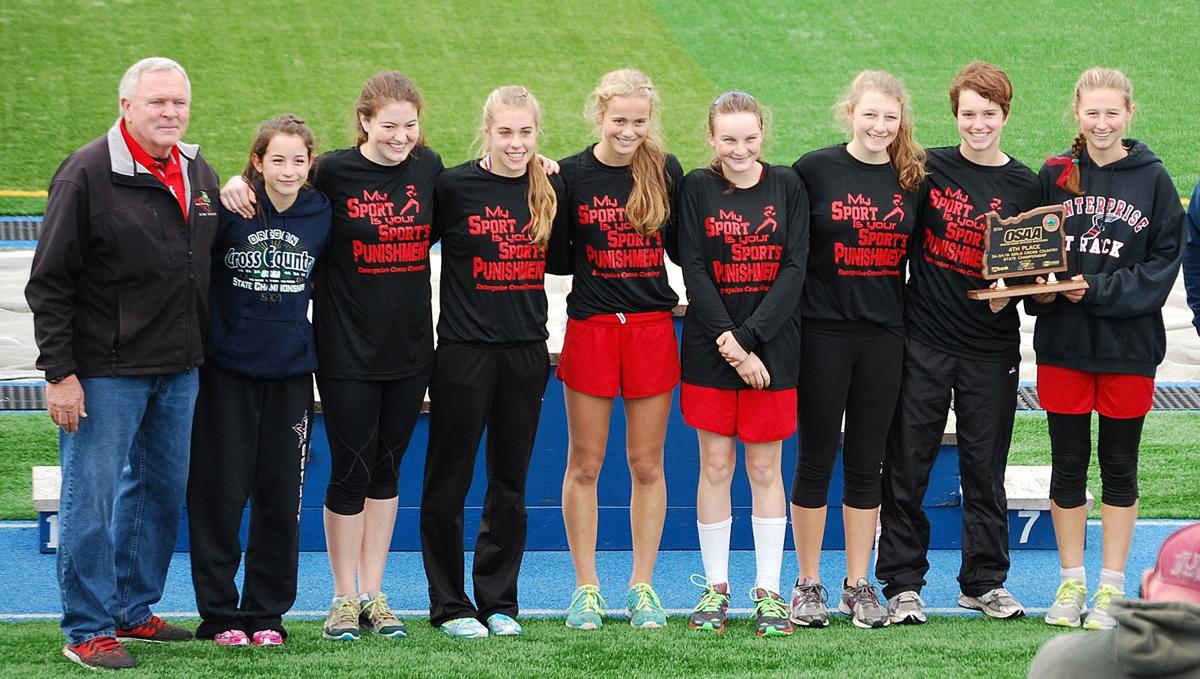 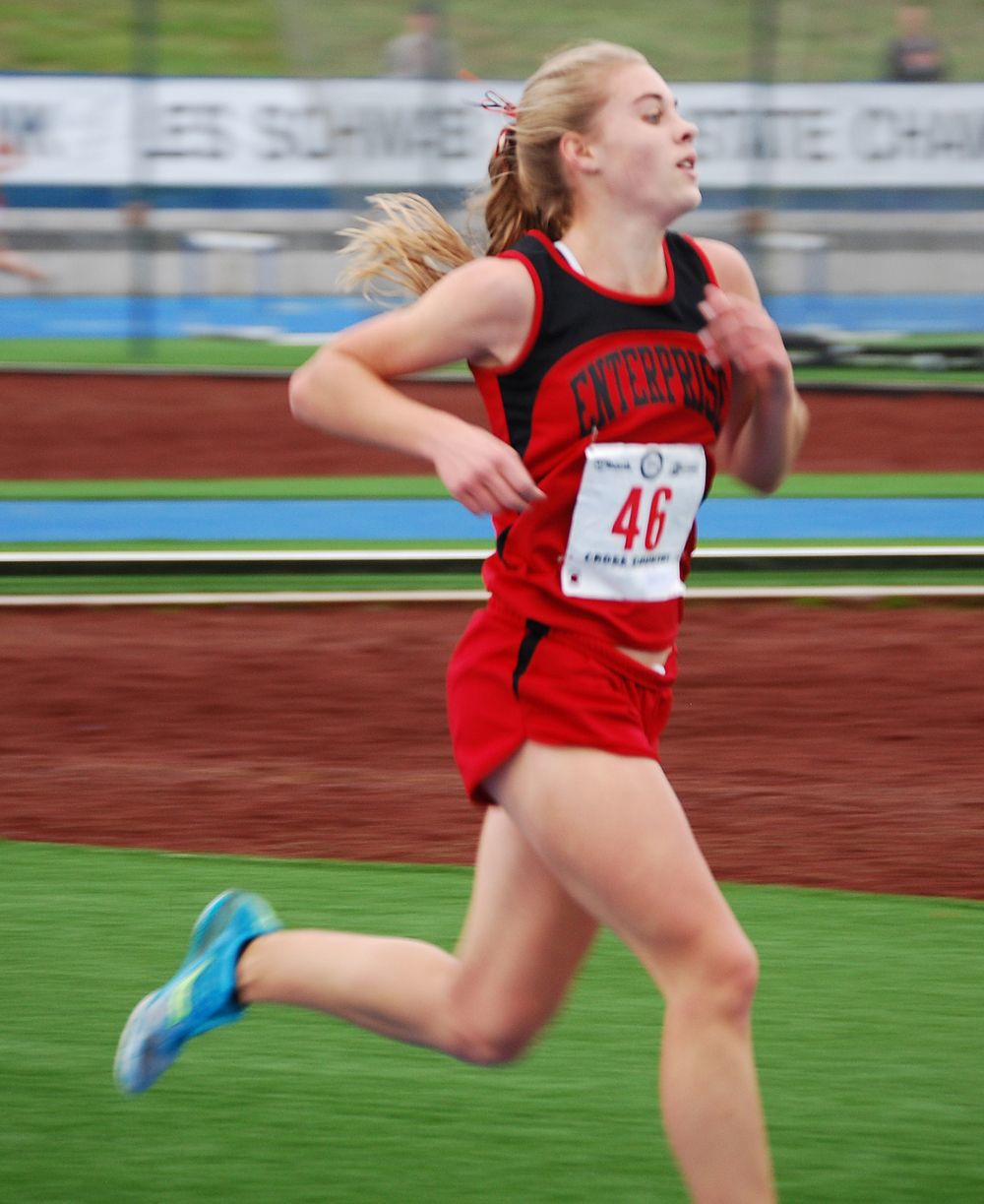 photo/Kim Tingelstad Isabelle Tingelstad gives it a burst of extra speed as she runs the last 75 meters of the race and finishes fourth at the state meet. 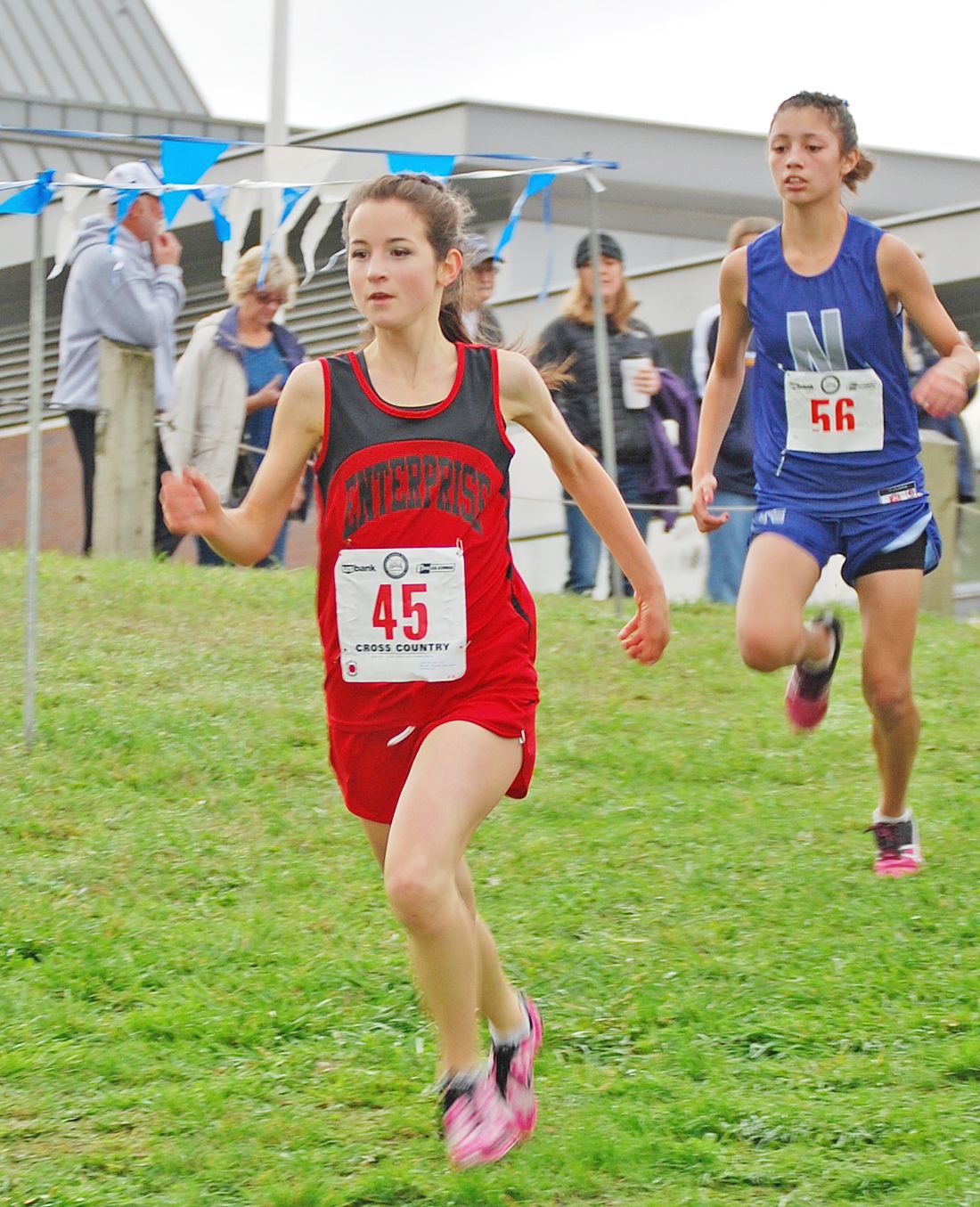 photo/Kim Tingelstad Isabelle Tingelstad gives it a burst of extra speed as she runs the last 75 meters of the race and finishes fourth at the state meet.

The Enterprise/Joseph girls’ cross country team tied with Bandon for third place in last week’s OSAA State Championships, Nov. 1 at Lane Community College in Eugene. The trophy the team brought home was for fourth place, however, after Ent/Jos and Bandon each added their sixth runner to the score as the tie-breaking formula.

Coach Moody explained, “You only add up the times of the five best runners. In the case of a tie, your sixth-place runner competes against the sixth-place runner of the team you are tied with.” Bandon took home the third place trophy.

Moody added, “It really was a fantastic weekend. One or two girls would have liked to run better, but they did everything they could and it was a great team effort.”

The day of the race Coach Moody said the girls seemed pretty relaxed, considering they were vying for a state title. Moody credited sophomore Isabelle Tingelstad, who ran at last year’s state meet, for helping keep the girls calm. Moody said, “Isabelle had the experience, Dawn Mist Movich-Fields and Eliza Irish came down for the meet last year to watch, so they also had an idea what to expect.”

Out of 92 runners from 12 schools, Tingelstad came in fourth, besting her own personal time by an amazing 20 seconds. She ran the 5,000 meters in 19:43. Movich-Fields came in sixth, only three seconds behind Tingelstad at 19:46. Ellie Van Doozer posted a time of 21:30, with Eliza Irish finishing the race at 21:39. Fifth-place runner for the team, Sarah Madsen, finished with a time of 23:12. Morgan Anderson made the fourth place trophy possible with a time of 24:46. Foreign exchange student from Iceland, Emma Soffia Emilsdottir, ran her personal best time, 25:57.

The Union Bobcats came in first at the state meet and Moody said it was nice to see that because in divisional racing, if your team doesn’t win, you root for the team in your league. Moody also gave credit to Bandon’s first-place runner Sailor Hutton who finished the race with a time of 18:36.

A highlight and inspiration for the team came Friday evening when former state champion and alumni David Ribich brought three of his friends from Western Oregon University to dinner with the team. Alex Tyler, one of David’s old teammates from Enterprise, also came to the dinner. “Everybody had fun talking about the differences in girls’ teams and boys’ teams.” Moody said.

Enterprise High school will add another trophy to its display case, and Coach Moody said it was a fantastic conclusion to the year.

Will the Wisconsin-Nebraska football game be played Saturday? Here’s what the Big Ten COVID-19 protocols say