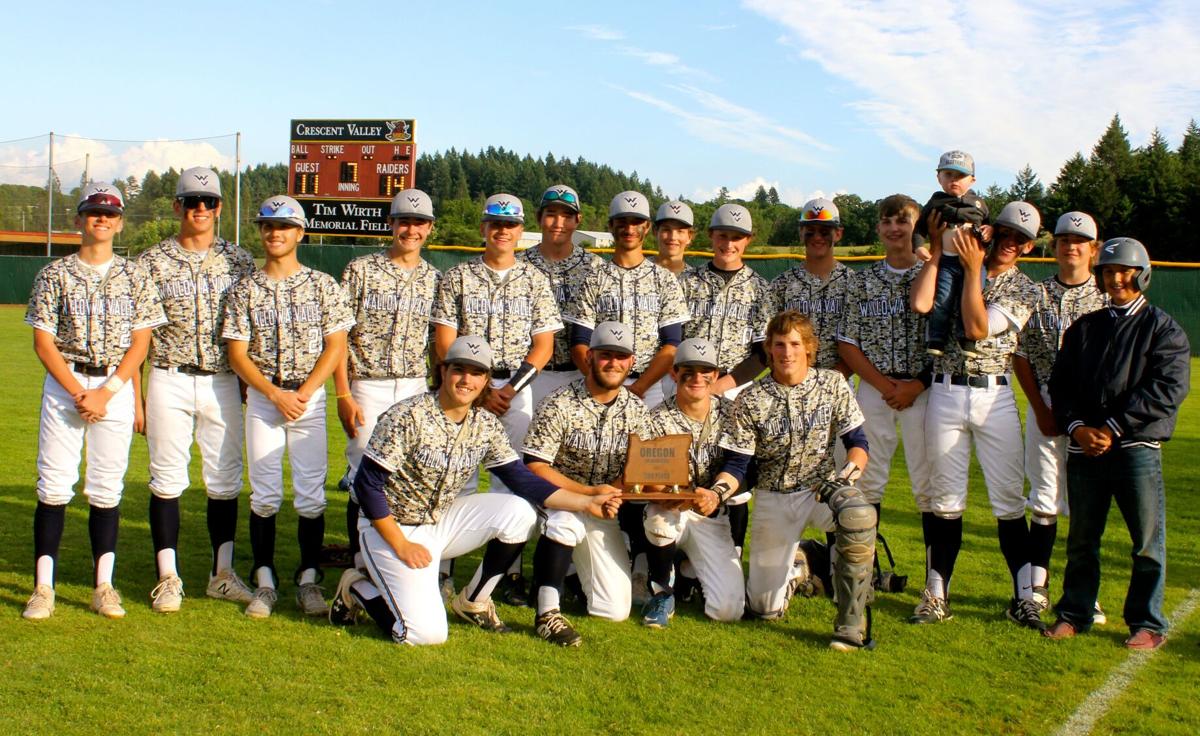 The Wallowa Valley baseball team poses with the third-place state trophy after defeating Rainier 14-11 on Saturday, May 22, 2021, in Corvallis. 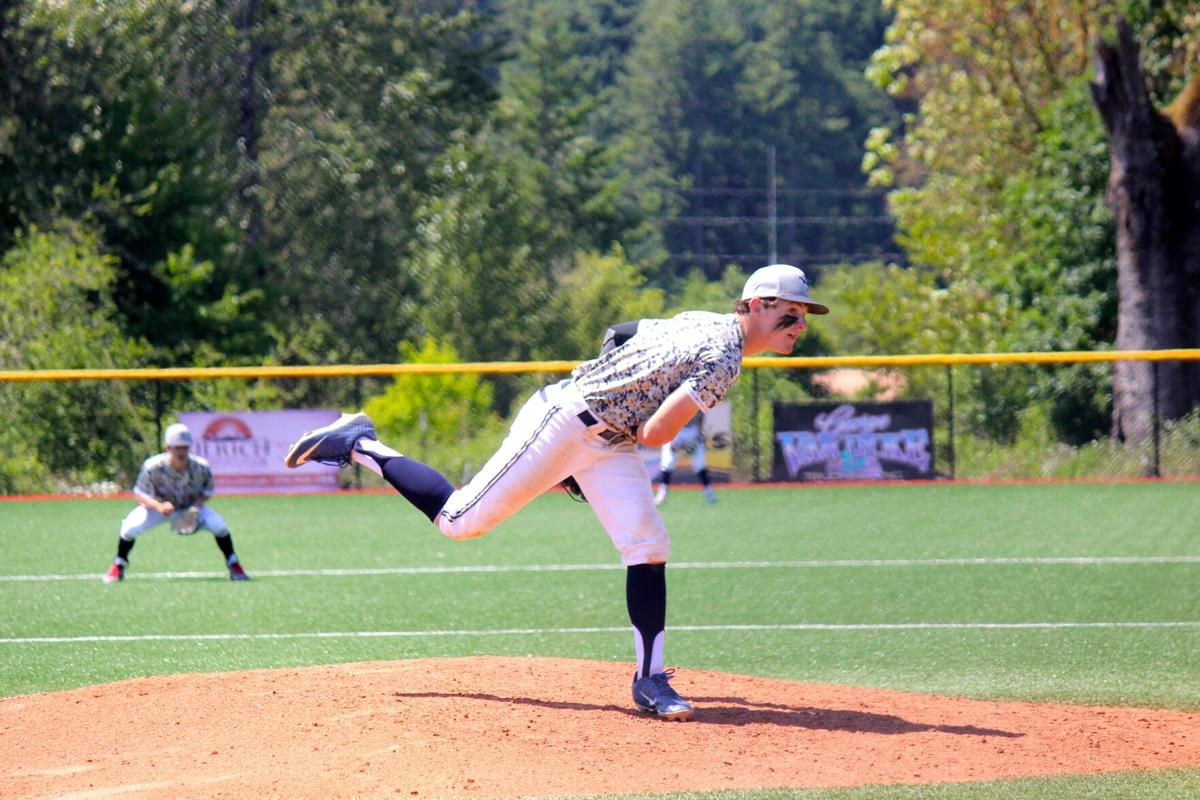 Trace Evans delivers a pitch for Wallowa Valley during a semifinal game against Brookings-Harbor on Saturday, May 22, 2021, at Adair Village. The Eagles fell to Brookings, 3-0, but later defeated Rainier 14-11 to take third in Class 3A.

The Wallowa Valley baseball team poses with the third-place state trophy after defeating Rainier 14-11 on Saturday, May 22, 2021, in Corvallis.

Trace Evans delivers a pitch for Wallowa Valley during a semifinal game against Brookings-Harbor on Saturday, May 22, 2021, at Adair Village. The Eagles fell to Brookings, 3-0, but later defeated Rainier 14-11 to take third in Class 3A.

CORVALLIS — In one unforgettable inning, the Wallowa Valley offense woke up and the Eagles baseball team was catapulted from the cusp of a run-rule defeat to a wild victory and a third-place finish.

The Eagles scored 13 runs in the fifth inning to turn what was on the verge of being a Rainier rout into a 14-11 victory Saturday, May 22, in the third-place game of the 3A culminating week championship series at Crescent Valley High School in Corvallis.

The Eagles (13-3 overall) were on the ropes when they came to bat in the fifth, already trailing 11-0, and needed two runs just to extend the game past the fifth inning.

Instead, they completely flipped the game around, recording numerous hits, sending 18 batters to the plate and taking advantage of at least four Rainier errors.

“They just kept scoring every inning, and we weren’t, so morale got down,” head coach Mark Ramsden said. “A dropped fly ball kept us alive with two outs.”

Ramsden credited the bench for helping turn morale around.

“I think what turned things around really was our bench was always encouraging. The guys on the bench never gave up,” he said. “The bench has always been loud and encouraging, and this is the game that it paid off.”

An error and walk opened the bottom of the fifth, and Evans followed with a two-run double to get the Eagles on the board. Chase Homan’s first hit drove in Evans to make it 11-3. After another error, Nave doubled in two to make it 11-5, then scored on a David Salim squeeze bunt. A walk, error and an out later, Maclane Melville’s RBI single chiseled the lead even smaller. It was now just 11-7.

Evans struck again, knocking in two more runs with a single, then scoring on an error to cut the margin to a single run. Homan, who had singled, scored on a double steal to tie the score. Nave and Salim followed with RBI single — Nave’s for a 12-11 lead and Salim’s for a two-run margin — to complete the stunning turnaround. The Eagles batted around twice in the inning.

Nave started and completed the game on the mound, tossing the first 1⅓ innings then pitching the final inning for the save. He finished with four hits, two walks, three strikeouts and six runs in 2⅓ innings.

It was a different story earlier Saturday, as Wallowa Valley’s run for a title ended when its offense was shut down by Brookings-Harbor pitcher Jason Deshon in a 3-0 loss at Santiam Christian High School in Adair Village.

But all Wallowa Valley was able to muster offensively was a double by Flynn Nave and a single by Jaxon Grover. Brookings, which went onto win the title game later Saturday night, 11-2, over Yamhill-Carlton, went a perfect 16-0, shut out half of its opponents and outscored teams 168-22.

Nave, in addition to having one of the two hits, pitched 1⅔ innings of hitless relief, striking out three batters in the process.

Evans scores late to send Eagles to the final site

Wallowa Valley wouldn’t have even reached the final site of the 3A state baseball playoffs had it not been for a moment of redemption for Evans on Tuesday, May 18.

Evans threw out the potential winning run in the bottom of the seventh inning to force extra innings — one batter after dropping the would-be final out — then scored the eventual winning run in the top of the eighth as the Eagles held on for a wild 9-8 victory over Warrenton in a quarterfinal game at the Dalles.

In the bottom of the seventh inning, Nathan Streibeck scored to tie the game at 8-8 when Evans dropped a Ryan Hoagland fly ball that would have been the third out.

As baseball is wont to do, Evans was given another chance. The next batter, Josh Earls, singled to Evans in center field. This time, Evans made the play, and threw out Hoagland at home to save Wallowa Valley’s season.

In the eighth, Evans walked to open the frame, moved over on a Homan single, and scored the eventual winning run on an RBI groundout by Ramsden.

Nave then struck out three batters in the bottom of the eighth to preserve the win.

Nave pitched the final four innings in relief, allowing one run on two hits with three walks and eight strikeouts. He also went 2-for-4 and scored a run. Salim and Grover both had three hits, while Salim scored twice. Ramsden also scored two runs.