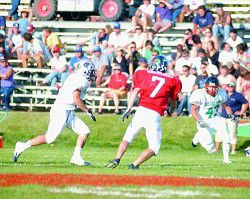 Former Jospeph defensive back Jake Vanderzanden stays close to his man at the 54th East-West Shrine game on Saturday in Baker City. The East triumphed over the West 19-7. Blair J. Parker/Chieftain 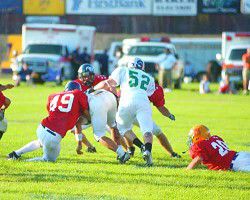 Tristan Patton (49) joins his East teammates in a tackle on Saturday at the East-West Shrine game. This game, run by volunteers, raises money for the Shrine Hospital for Children.

Former Jospeph defensive back Jake Vanderzanden stays close to his man at the 54th East-West Shrine game on Saturday in Baker City. The East triumphed over the West 19-7. Blair J. Parker/Chieftain

Tristan Patton (49) joins his East teammates in a tackle on Saturday at the East-West Shrine game. This game, run by volunteers, raises money for the Shrine Hospital for Children.

The 54th Annual East West Shrine game belonged to the boys from the east side of the state Saturday afternoon. Both teams came out of the gates with strong defense, but by the time the fourth quarter rolled around the East had gained control and dominated play downing the Westsiders 19-7 at Bulldog Memorial Stadium in Baker City.

"It was a great honor to be invited to play in the game, and obviously, it feels better when you win," said Joseph linebacker Tristan Patton. "But what really makes it great is that it was all for the Shriners and the kids, so everyone won today."

Neither squad was able to put any points on the scoreboard in the third, but the East flirted with the end zone several times in that quarter. Both teams played it safe to start the fourth, running the ball on almost every possession, but with a little over seven minutes remaining, the East started taking some chances by putting the ball in the air. All off the passes were incomplete, but it made the West pay attention to the receivers.

After trying to get its air attack going, the East went back to its bread and butter - running the ball - and it worked. Quarterback Brady Lovell of Vale ran the ball four times on the East's drive and the final time he had the ball in his hands, he faked a handoff to Dollarhide and then took the ball up the middle of West's defense, ran for 32 yards and made the score to give the East a 13-7 lead.

West tried to respond two possessions later, but as East's defense started to put pressure on quarterback Luke Gilgan of Sherwood, he threw an errant pass right into the arms of Heppner defensive end Rory Kilkenny, who returned the interception 42 yards for the touchdown and a 19-7 cushion for the East with 1:49 left in the game.

"For me, it felt like it was a long time coming (the win)," said Joseph linebacker tristan Patton. "The two interceptions near the end was definitely a good thing and couldn't have been better timing."

East struck first in the opening quarter at the hands of Sam Dollarhide. Heppner's Matthew Kenny got the ball moving for the East with a 17-yard scamper down the right sideline. Six plays and 42 yards later, Dollarhide pounded the ball in from the one-yard line for the first score of the game.

Neither team was able to gather much momentum in the first two quarters, punting the ball a combined seven times. But with 1:52 reaming in the half, West found its rhythm. Staring the drive on its own 35-yard line, the West strung together three solid runs by Colton's Eric Norton, including a 12-yard gain. After five consecutive plays on the ground, Norton capped off the drive with a rushing touchdown from the four-yard line, tying the score at 7-7.

Jordan Nelson of Mazama put the final nail in the West's coffin after picking off Gilgan for the second consecutive time in as many series.

Both had several key tackles on defense and special teams, helping their squad keep the West's offense under wraps. Next year, Patton is headed to college, while Vanderzanden will travel to Kenya, Africa for nine months on a mission trip.

"All of the guys that I played with were so much fun and it was great getting a chance to meet so many different guys from all over," Vanderzanden said.

"Being with all of the guys during the down time and getting to know the other guys was the best part of the whole week," Patton said.