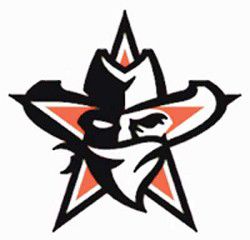 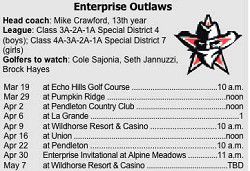 Cole Sajonia returned to lead the boys' varsity after spending last year in Arizona. A freshman at Enterprise in 2008, Sajonia stood out as one of this district's best golfers. At state championship meet, a two-day event, he shot 15 over par. That was good enough for fourth place.

"I think we'll be reasonably good before we're done," coach Mike Crawford said. "The guys who played last year have improved. We should contend."

As for the girls' team, Enterprise has assembled a batch of newcomers. Junior Tess Nicholls tried her hand at a couple of last season's tournaments, and junior Ariel Widener did the same as a freshman. They will play with sophomore Hannah McCarthy, sophomore Karlee Riggs and freshman Jill Morton.

This season begins March 19, with the Heppner Invitational at Echo Hills.