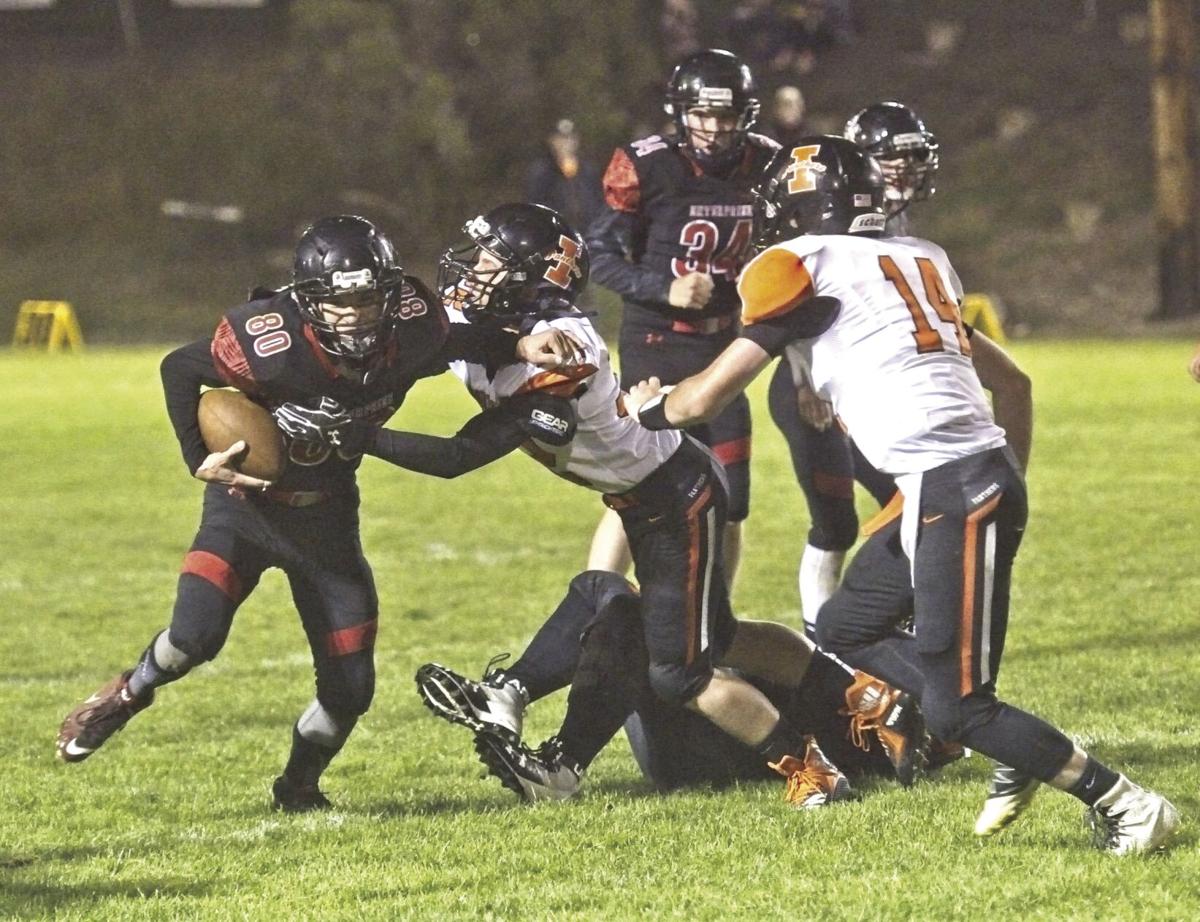 Enterprise’s Jericho Peters carries the ball during a game against Imbler in 2019. The football season gets underway next week for the Outlaws. 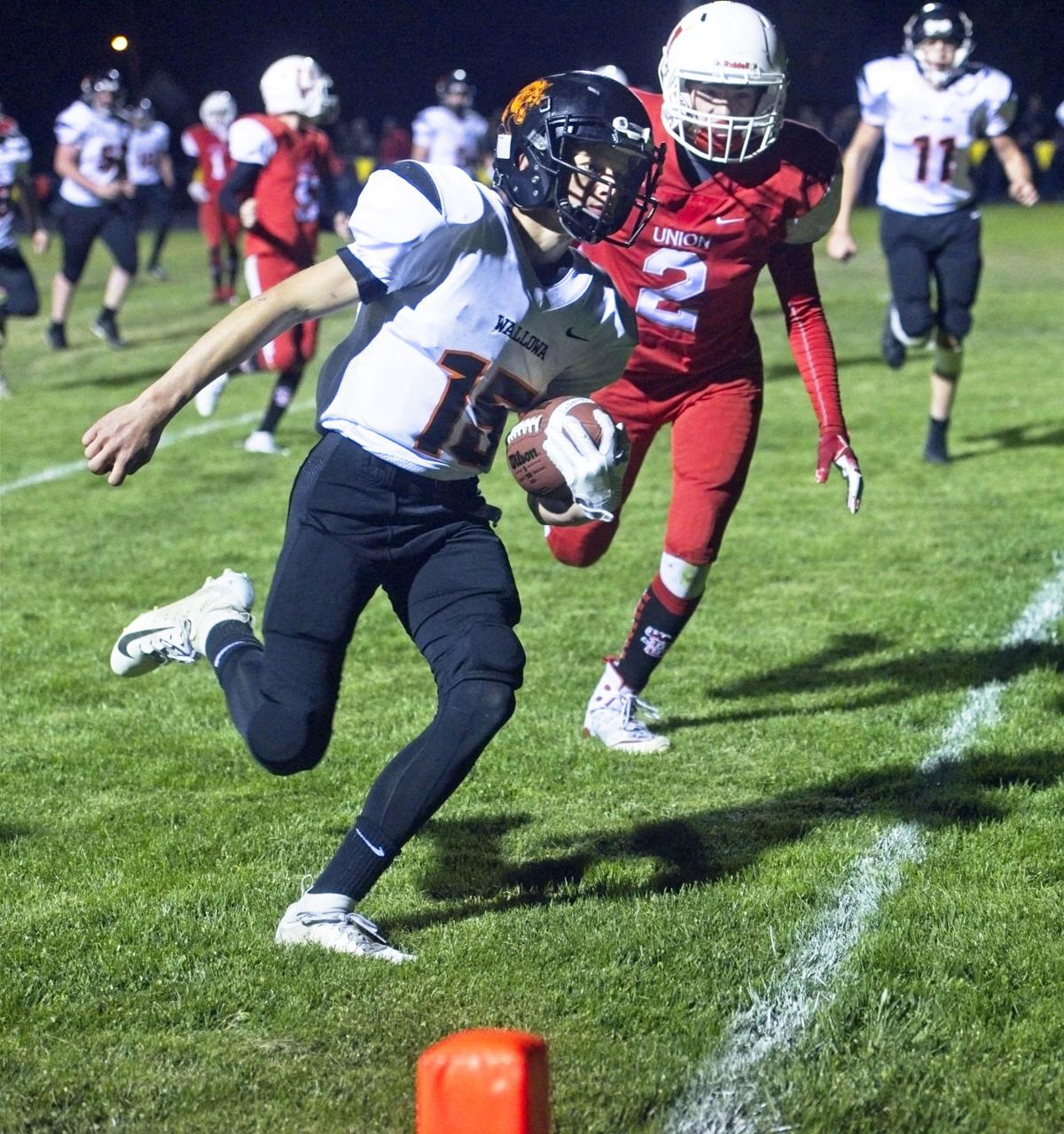 Lute Ramsden scores a touchdown in a game against Union in 2019. The Cougars begin the 'Season 2' slate Saturday, March 6, 2021. 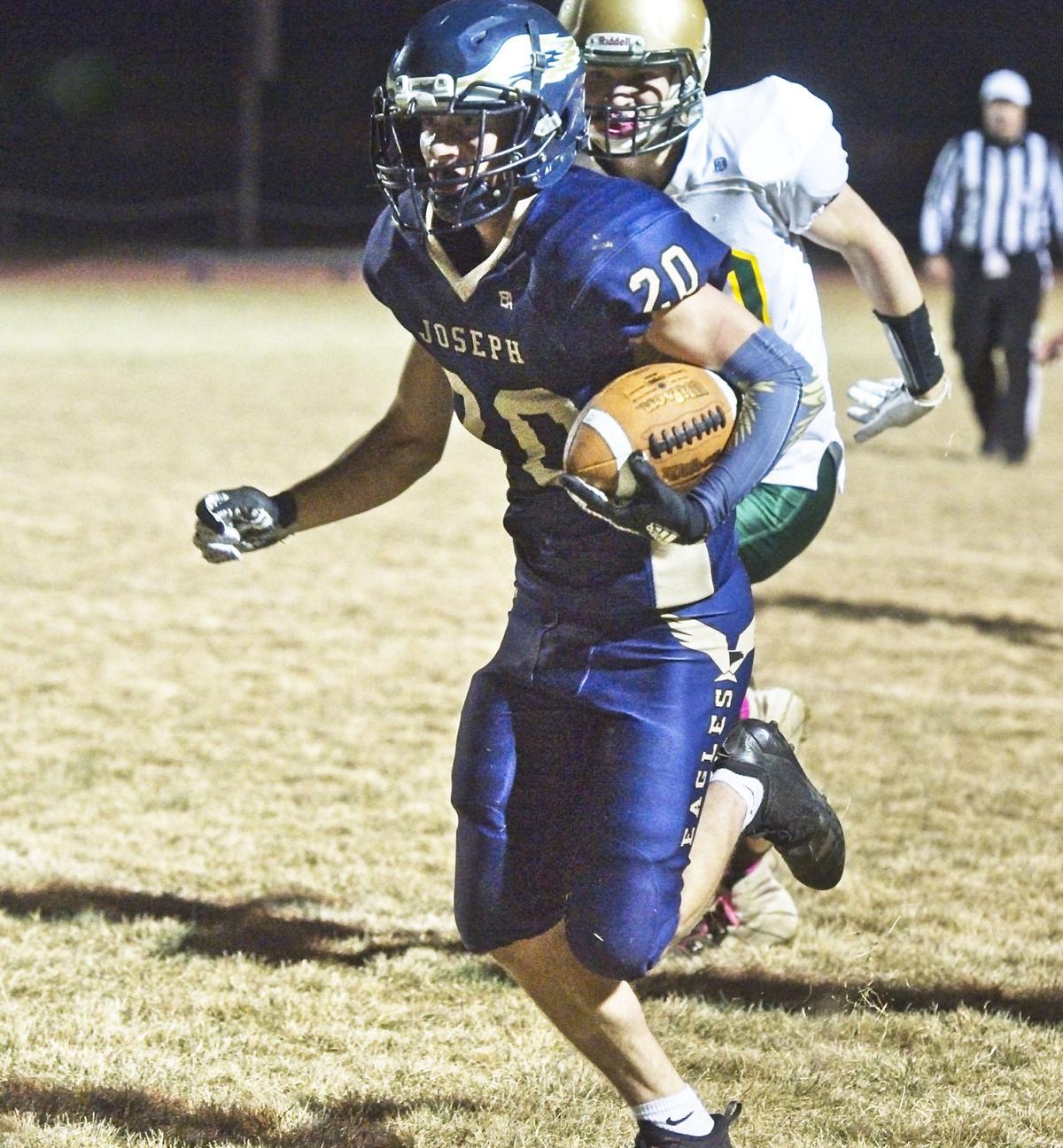 Enterprise’s Jericho Peters carries the ball during a game against Imbler in 2019. The football season gets underway next week for the Outlaws.

Lute Ramsden scores a touchdown in a game against Union in 2019. The Cougars begin the 'Season 2' slate Saturday, March 6, 2021.

Defense a focal point for Eagles again in 2021

JOSEPH — Defense has been the name of the game for the Joseph football team during its two years in six-man football — and will be again this spring when it opens Season 2 play on Friday, March 5, at Harper.

“We spend a lot of time working on defense,” Eagles head coach Duncan Christman said. “Defense is really what sets the tone for us. It’ll be a little different than it was with passing league defense.”

In two seasons of six-man, Joseph has given up a total of 100 points over 14 games — 7.14 points per game. The Eagles, who are 13-1 in that stretch, have recorded six shutouts and held four additional opponents to fewer than 10 points.

The offense, which itself has been no slough at 55 points per game the last two years, should gain a boost from the 5-on-5 passing league that area schools took part in in the fall.

“It was a blessing to get that extra time to work on everyone with rout running, getting our receivers and QBs on the same page — and we’re looking to build on that,” Christman said.

Juston Rogers and Jonah Staigle are two returning seniors Christman expects to play a big role yet again. Rogers has been a key factor in the Eagles’ running game the last two years, while Staigle has helped shore up the Joseph line.

Hayden Hite, Harley Miller and Trace Collier, who will be at quarterback, also are important players among the returners.

Among the newcomers Christman is excited about are Kale Ferguson and Kane Johnson.

He’s a sophomore who is going to do some really great things for us,” Christman said of Ferguson.

One concern, the coach said, has been dealing with the snow. The team has slowly acclimated to practicing outside, but future storms could potentially impact game play.

“That’s the main challenge right now. The weather is good now, but if it snows again (and) it gets really nasty, it limits what we can do,” he said.

And though it’s a different season — being played in the spring in a pandemic — Christman said the approach will be the same.

“We’re all looking forward to it, we’re gonna treat it like any season even though it’s shorter than we’re used to,” he said.

The highlight game may be the finale on April 2 at South Wasco County. The Redsides are the only team to hang with Joseph the past two years, and handed the Eagles a 19-6 defeat in the 2019 six-man de-facto title game.

Cougars look to build of strides made at end of 2019

WALLOWA — Head coach Matt Brockamp said he has a highly motivated group of players — led by four seniors he coached when they were in fourth grade — that he’ll take the field with this spring when game play starts.

“They really are a lot of fun to coach, a great group to coach,” he said. “We made a lot of improvements late in the year (in 2019) and got, really, better and better each week … We did a lot of good things with those guys.”

He said the Cougars were a much better team than their 2-6 record indicated, and the growth was evidenced in that late in the season, Wallowa hung with eventual state semifinalist Crane before losing 56-40.

“I’m excited for these seniors to have the opportunity to compete again,” Brockamp said. “Hopefully things will come together on Saturday.”

Wallowa didn’t lose any players to graduation, brings back the four seniors in Zeb Hermens, Zeb Ramsden, Tristin Bales and Freddy DeVore, and returns its quarterback in sophomore Lute Ramsden. The younger Ramsden — and the offense — benefitted from the 5-on-5 passing league in the fall that helped nail down the Cougars’ passing attack.

“(He’s) a good, accurate quarterback,” Brockamp said of Lute Ramsden. “It’ll be fun to watch … The fall did help with our passing game, and adding that into some of the other stuff we’re doing is going to be a lot of fun.”

“They’re bigger than we have ever been up front,” the coach said.

Brockamp also has two lengthy defensive ends in Ryder Goller and Kolby Mandal, juniors who are 6-3 and 6-5, respectively.

The team will implement tempo as it did in 2019, but may take its foot off the gas pedal at times.

“We learned a little bit, too, about tempo,” Brockamp said. “There were some instances we hurt ourselves. To vary it and know how to use it is a good thing. We won’t always be going fast as possible.”

Outlaws have bulk of key offensive elements back this spring

ENTERPRISE — The Enterprise football team only lost one senior to graduation from 2019, and brings back the bulk of its main offensive threats as it gets ready for the COVID-shortened and rescheduled ‘Season 2.’

The Outlaws will take the field a week later than the rest of the area teams, kicking off at home March 11 against Wallowa, which may serve a bit of a benefit given Enterprise lost two days of practice last week because of a confirmed COVID-19 case in the school.

Head coach Rusty Eschler said he has about 16 players out, but said he’s heard numbers are low throughout the region.

“It’s a different time. There’s other things kids are doing now,” he said. “Trying to make a fun experience for them and hope the word spreads.”

Enterprise will have at least one change on the offensive side of the ball this spring. Trace Evans and Jericho Peters still will play a primary role rotating in at tailback for the Outlaws, but Jacob Amaro, who took the snaps at quarterback in 2019, will move over to tight end, while Jackson Decker is slated to take the ball under center.

“He probably has the best hands on our team. He’s got some decent size,” Eschler said of Amaro.

Flynn Nave also has come out for football for the first time since middle school, Eschler said, and will add some bulk to the backfield as a fullback.

“Great having him out. He’s a really good athlete. He adds to the team,” Eschler said. “First time I’ve been at Enterprise (as) a head coach where I have a true fullback. It’s too bad we didn’t have a regular season.”

Enterprise will largely stick with its traditional offensive sets, but Eschler is looking to add a couple wrinkles to the mix.

The Outlaws went 2-5 in 2019, and there won’t be a statewide postseason event for teams to play toward as the Oregon School Activities Association culminating week will be local. But Eschler is hopeful the team will compete, even with no regular postseason to play for.

“We have five seniors, and they’re competitive, they’re good boys and stuff. There’s nothing at the end of the rainbow — it’s go out there, try to be competitive and execute.”

Editor's note: This story has been updated to reflect the cancelation of Wallowa's opener.

*all times, locations and dates subject to change