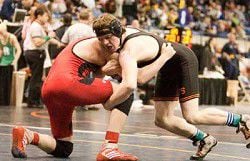 Alex Courtney (left) of Enterprise-Wallowa locks up in a takedown attempt with Phillip Sigle of Nestucca during action in the first round. 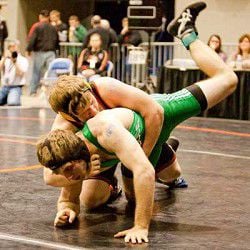 Alex Courtney (left) of Enterprise-Wallowa locks up in a takedown attempt with Phillip Sigle of Nestucca during action in the first round.

The team of boys from Enterprise and Wallowa sent four to the Feb. 26 and 27 event at the Memorial Coliseum.

David Badillo of Culver, the eventual state champ, thew Hayes off-course. A week after Hayes won the first-place medal at District 4's tournament in Union, he set off in pursuit of state gold. He started by defeating Ross Farthing of Santiam.

But a semifinal against Badillo stood in the way. Hayes battled for three periods, until the Culver boy pinned him with just 13 seconds remaining.

Hayes bounced back the following day. He outscored Gus Titus of Crane, 18-7, in a consolation semi. It was Hayes' second victory over Titus in a week. He also won in their Feb. 20 showdown in Union for the district's title.

After eliminating Titus, Hayes finished in the consolation final for third place. Wayne Vinton, a senior from Scio, took the medal by scoring a pin. Later that day, Badillo defeated his teammate, Mitch Nelson, for first place.

Cameron Princena, a senior heavyweight from Wallowa, also earned a victory. The first day of the tournament, he pinned Trent Walker of Glendale in less than a minute. But in a semifinal, Siletz Valley's Loy Marthaller pinned Princena as just 15 seconds remained in the final period. Consolations set up a rematch. Daniel Minarich of Pine Eagle, who had beaten Princena at the district tourney, did it again.

Later, Minarich lost the match for third place to Walker, Princena's victim the previous day in their quarterfinal.

Meanwhile, Enterprise-Wallowa had two representatives in the 189 but they ran into tough obstacles. Senior Jake Schaeffer, District 4's champ, started by challenging Austin Edwards of Riddle who would eventually take fourth place. Falling to the consolation bracket, Schaeffer then lost to Scio senior Cody Hancock.

Enterprise junior Alex Courtney began the tournament with a quarterfinal against Phillip Sigle of Nestucca, who ended as the state's runner up. After Sigle pinned him, he lost to Kody Worthington of North Lake.