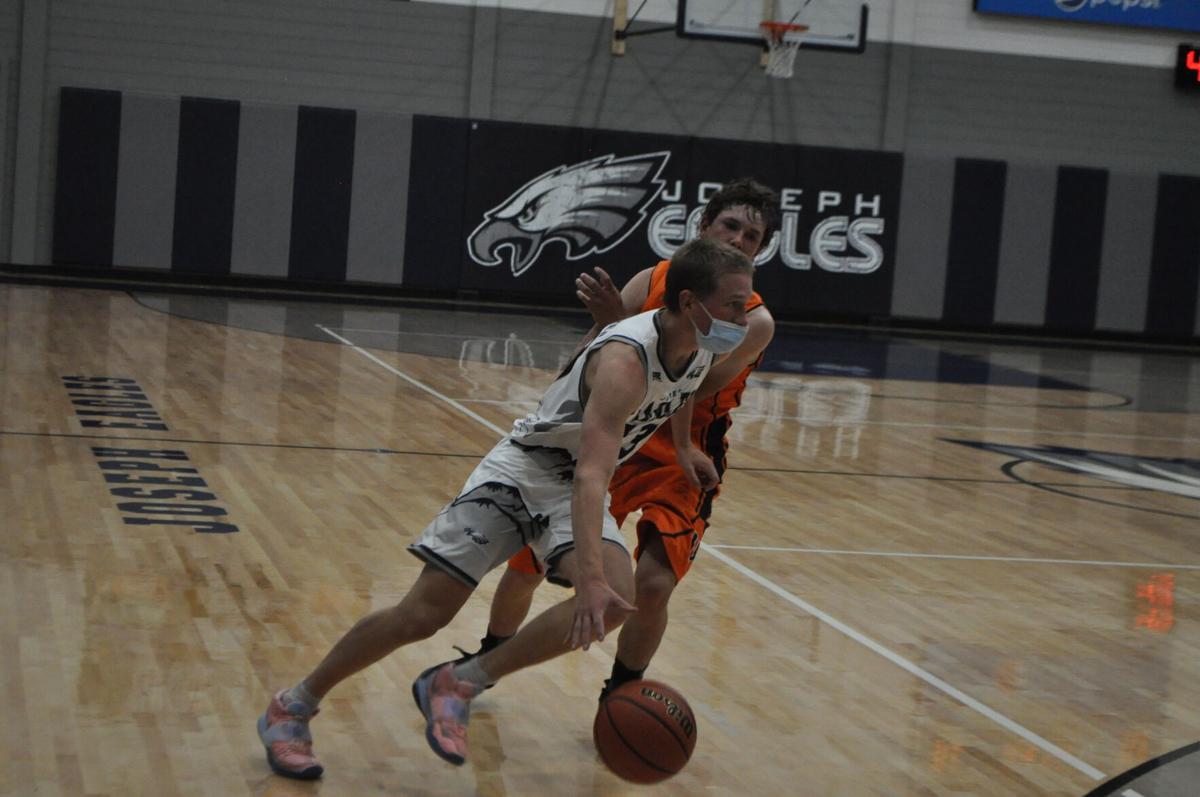 Mason Ferré, who led Joseph with 15 points Tuesday, May 25, 2021, drives past Wallowa’s Zeb Hermens. The Joseph Eagles defeated Wallowa in the Season 4 contest, 55-29. 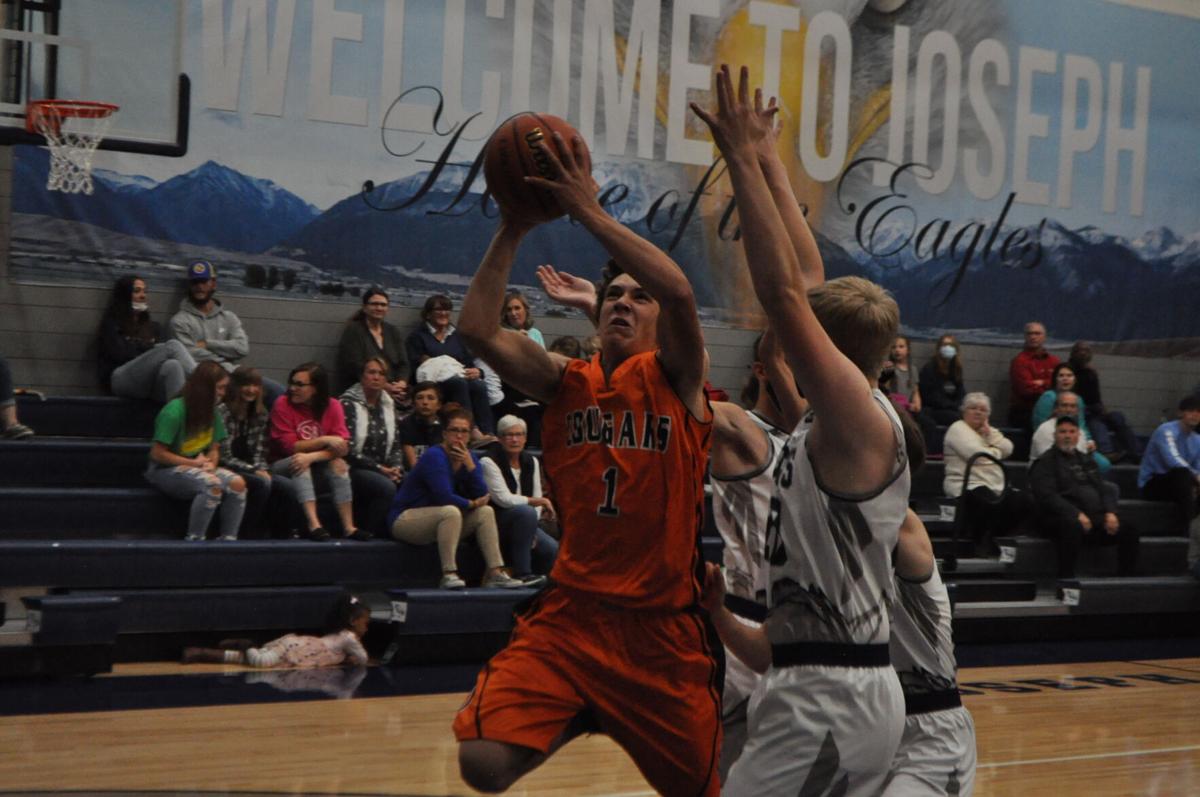 Wallowa’s Zeb Hermens, left, drives to the hoop against Joseph’s defense Tuesday, May 25, 2021. Hermens scored 12 points to lead Wallowa, but the Cougars fell, 55-29.

Mason Ferré, who led Joseph with 15 points Tuesday, May 25, 2021, drives past Wallowa’s Zeb Hermens. The Joseph Eagles defeated Wallowa in the Season 4 contest, 55-29.

Wallowa’s Zeb Hermens, left, drives to the hoop against Joseph’s defense Tuesday, May 25, 2021. Hermens scored 12 points to lead Wallowa, but the Cougars fell, 55-29.

JOSEPH — An extended run that started midway through the first quarter and rolled early into the third quarter gave the Joseph boys basketball team a win in its home opener.

The Eagles held Wallowa without a point for more than nine minutes during a 25-4 run, and moved to 3-0 in Season 4 with a 55-29 win over the Cougars on Tuesday, May 25, at Sather Court.

“I was definitely proud of those guys. (They were) playing hard throughout the whole game,” Joseph head coach Olan Fulfer said. “I gotta give it to Wallowa, too. They played incredibly hard, and they played us tough the whole time.”

The teams were close early, but the tables quickly turned after Tristin Bales’ layup tied the game for Wallowa at 7-7 with 4:30 to go in the first quarter.

Mason Ferré, who had had a game-high 15 points, scored five straight to start the run, and Javon Brown had a late layup to send the Eagles into the second ahead 17-7.

Wallowa never got back within double digits.

A second quarter dominated by Brad Wilcox, who scored eight in the period and 14 in the contest, ended with the Eagles ahead 30-11. In the quarter, Wilcox had a hot stretch late with a putback, a short field goal and a layup that helped Joseph quickly build the margin.

Fulfer said the goal was for his team to open up the inside game with outside shooting, which was what the Eagles ultimately did.

“We missed a lot of shots that we’re hoping to later on make,” he said. “I still wanted them to take those shots. Some of them were kind of out of the offense, but the main thing is I want them attacking and feeding the post, and that’s what we started doing finally after our timeout. Brad ended up with (several points) just off those drives and dishes.”

Zeb Hermens, who led Wallowa with 12 points, did hit a 3-pointer with 3:20 to go in the second that ended a nine-minute drought and pulled the Cougars to 22-10, but Wallowa got no closer the rest of the night.

The margin touched 24 in the third when Chase Homan’s trey made it 41-17. The Cougars trimmed the deficit to 17 to start the fourth on a putback by Jace Fisher, but Joseph scored eight of the next 10 points, going up 49-26 on another layup by Wilcox.

The Cougars (0-1 overall) struggled with turnovers and played rushed on the night, but Fulfer chalked a lot of that up to his opponents being in their opener, and expects they’ll improve quickly.

“Joseph played really well,” Wallowa head coach Cody Lathrop said. “It was a great atmosphere for Joseph. It was a pretty intimidating atmosphere for us. Being the first game, when we showed up, we wanted to win bad, and we were a better team than we showed.”

Brown added six points for Joseph, while Mason Moore chipped in seven for the Cougars.