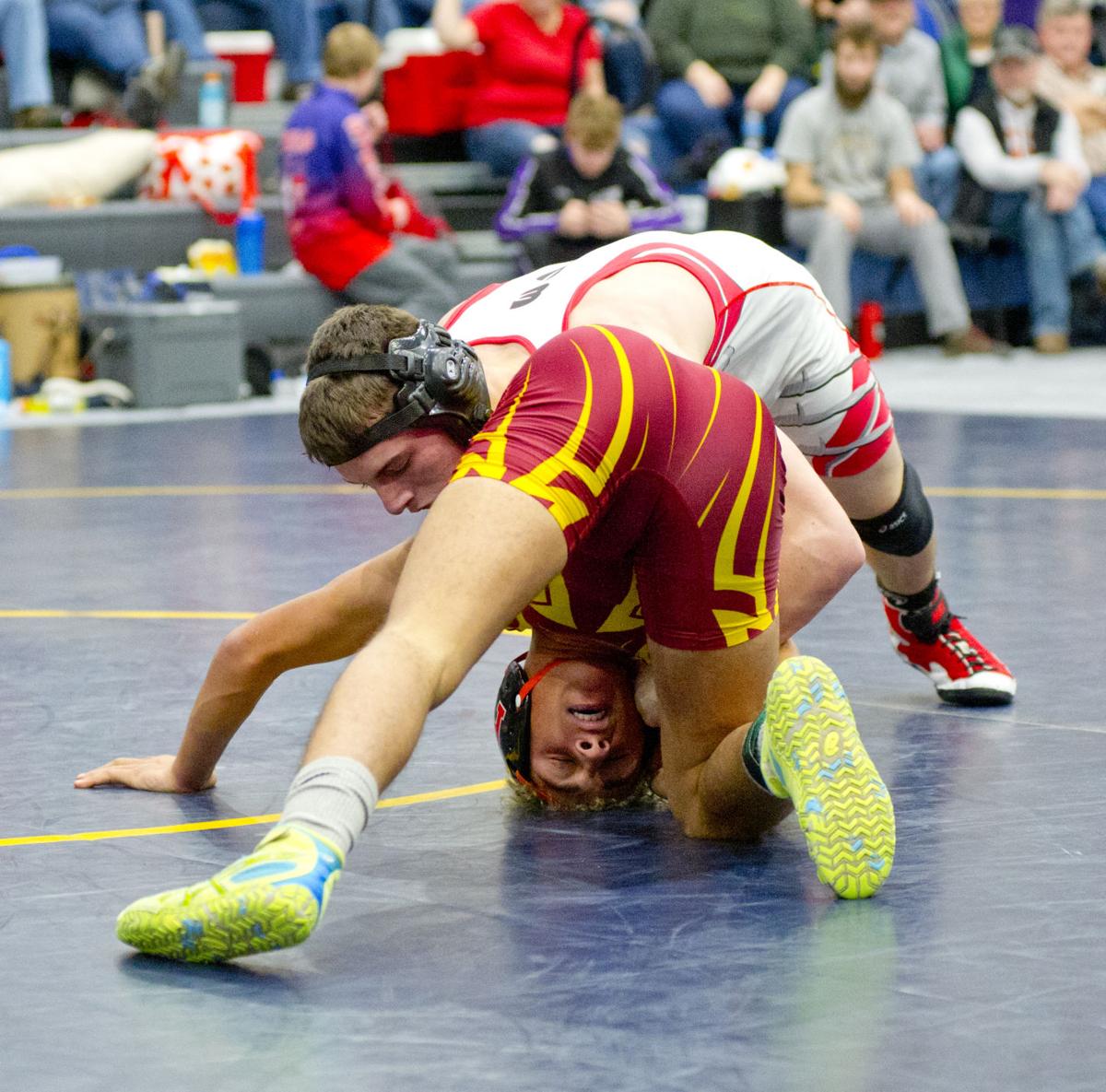 Steve Tool/Chieftain Headache -- Enterprise Outlaws wrestler, Trace Evans (upper wrestler), puts his opponent's head to the mat for a quick chiropractic lesson during the 138 pounds wrestling championship at the Jo-Hi Invitational on Jan. 3-4. Evans won the match by technical fall, 17-2. 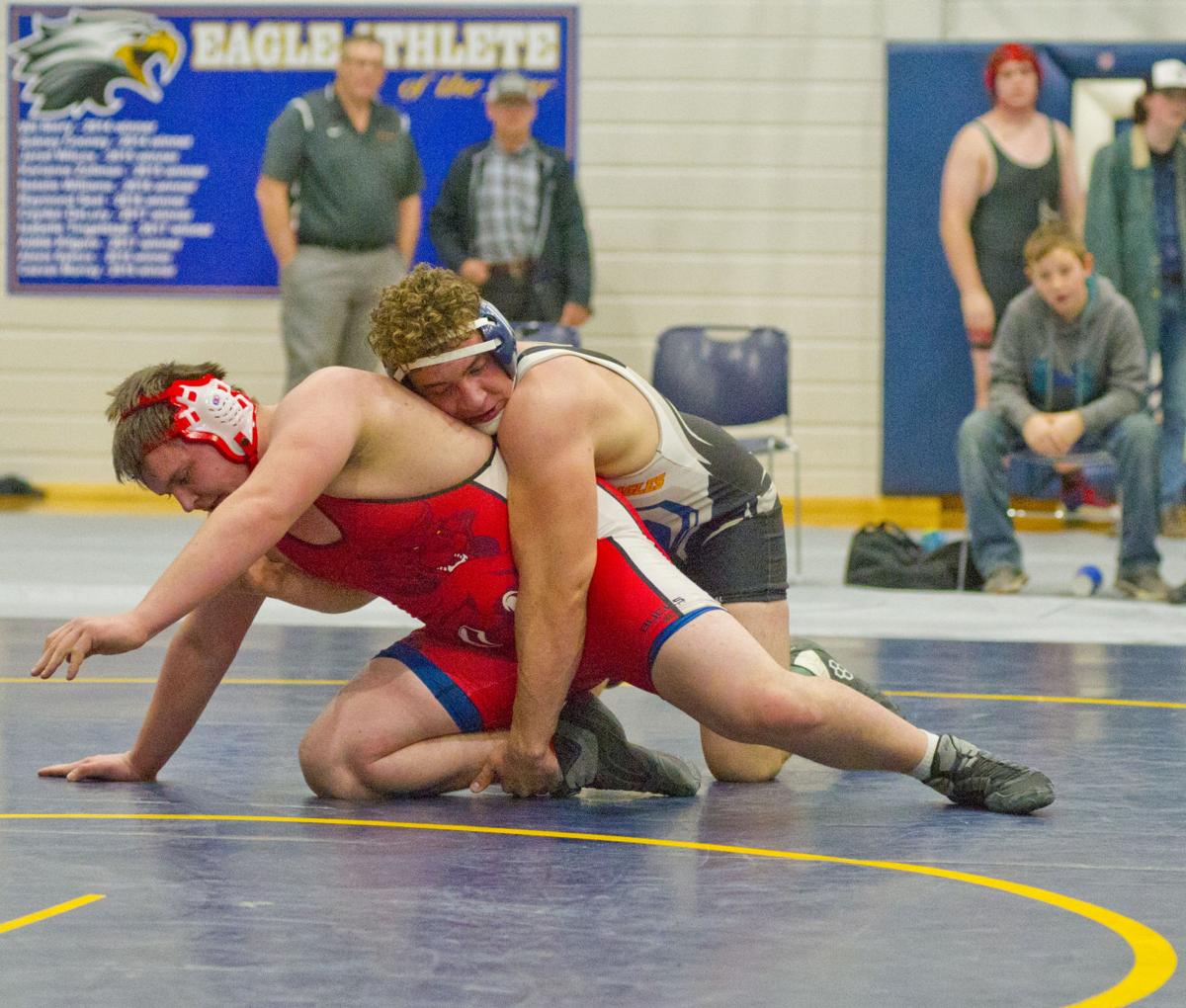 No escape -- Union Bobcats wrestler, Michael Day (red singlet), discovered no escape from the iron grip of Joseph wrestler, Jonah Staigle in the 220 pounds championship match at the Jo-Hi Invitational. Staigle easily won the match, 14-6, for the championship.

Steve Tool/Chieftain Headache -- Enterprise Outlaws wrestler, Trace Evans (upper wrestler), puts his opponent's head to the mat for a quick chiropractic lesson during the 138 pounds wrestling championship at the Jo-Hi Invitational on Jan. 3-4. Evans won the match by technical fall, 17-2.

No escape -- Union Bobcats wrestler, Michael Day (red singlet), discovered no escape from the iron grip of Joseph wrestler, Jonah Staigle in the 220 pounds championship match at the Jo-Hi Invitational. Staigle easily won the match, 14-6, for the championship.

No one says to a friend, “Hey, let’s play wrestling.” You don’t “play” wrestling. The sport has little of the essence of frolic. It is downright, full-on battle between two warriors.

About 112 warriors showed up at Joseph on Friday, Jan. 4 and the following day for the right to be crowned king of the mat. Altogether, 14 schools made the journey to Joseph, with teams such as Santiam Christian and Neah-Kah-nie trekking several hundred miles for the opportunity to pit themselves against some of the finest wrestlers in the state.

Joseph/Wallowa placed fourth with 100.5 points for the 14-team tournament while Enterprise placed seventh with 65.5 points. Culver won the meet going away with 264 points.

Locally, both Joseph/Wallowa and Enterprise are in the midst of rebuilding years. Regardless of that, each team boasted a member who vanquished all comers for the honor of placing the gold medal around their necks.

At 220 pounds, Jonah Staigle tore his opponents to shreds. He easily won his first match by fall 2:24 into the first round. The finals saw his opponent, Michael Day of Union, probably wishing that Staigle had pinned him early on.

Staigle, as the predator stalking prey, quickly turned Day into knots. The outcome seemed obvious 30 seconds into the match. Although thoroughly controlled by Staigle, Day refused to let both of his shoulders touch the mat.

This eventually resulted in an infuriated Staigle getting penalized for a body slam and later, for applying a full nelson. Other than a rollover that went one roll too far, Day accrued all his points by penalty.

It seemed a mercy when the buzzer sounded and a thoroughly defeated Day staggered off the mat at the bottom end of a 14-6 drubbing.

Staigle later said that it was his toughest match of the tournament. Although happy with the win, he also had regrets.

“I made some mistakes,” he said. “I shouldn’t have him (Day) that hard, and I shouldn’t have done the full nelson.” Asked about his plans for the end of the tournament he replied, “I’m going to take a nap — and eat!”

Jo/Wa coach Tim Kiesecker, said he wished he had about 60 more wrestlers, but the meet still offered plenty of competition with a number of state champs competing as well as other talented wrestlers.

The coach said he thought his team wrestled well, especially 145-pounder, Zeb Ramsden, who wrestled while being seriously down with the flu and still took third in a crowded category.

Although several expected teams didn’t show for the meet, Kiesecker is optimistic about its future.

“I’m really hoping we can keep the tournament growing,” he said.

For the Outlaws, Trace Evans easily defeated all opponents at 138 pounds (he plays football at 160 pounds). His final opponent, Carlos Norris, of Dayton, Wash., found himself in a similar predicament to Staigle’s opponent: Norris was unable to give the champ anything like a run for his money.

Evans seemed to toy with his opponent, never quite pinning him, but keeping him in a virtual tangle nearly every second of the match. The Outlaw was almost smiling at times and obviously enjoying himself before winning by technical fall, 17-2, for the gold.

“I could have ended it,” he said. “I could have pinned him anytime I wanted, but I like wrestling, and while I’m here, I might as well get my money’s worth,” he said, grinning.

“I was real happy with the intensity that the kids wrestled with over the weekend,” he said. He added he was also pleased that his wrestlers worked hard trying to hone skills worked on in practice.

Fent also noted Evans’ performance and said that Cody Fent and Charlie Evans, who placed fourth and third at 132 pounds and 170 pounds respectively, also exemplified the fruition of techniques learned in practice.

In addition to the performances noted above, Drew Widener placed third in the heavyweight bracket, winning by fall over Wylie Johnson, of Culver, a mere 36 seconds into the match.

The Outlaws travel to Orofino, Idaho, over the Jan. 10-11 weekend.