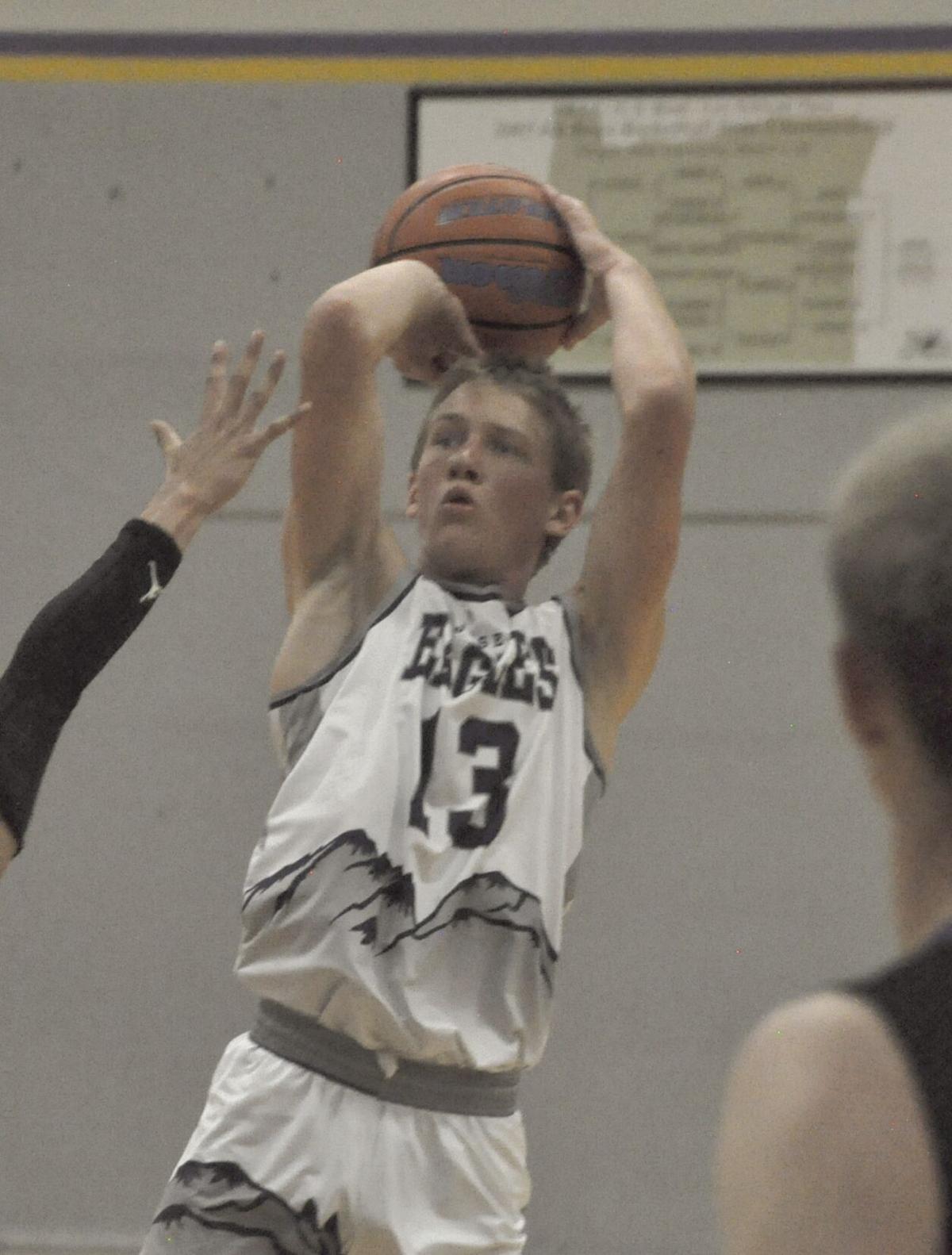 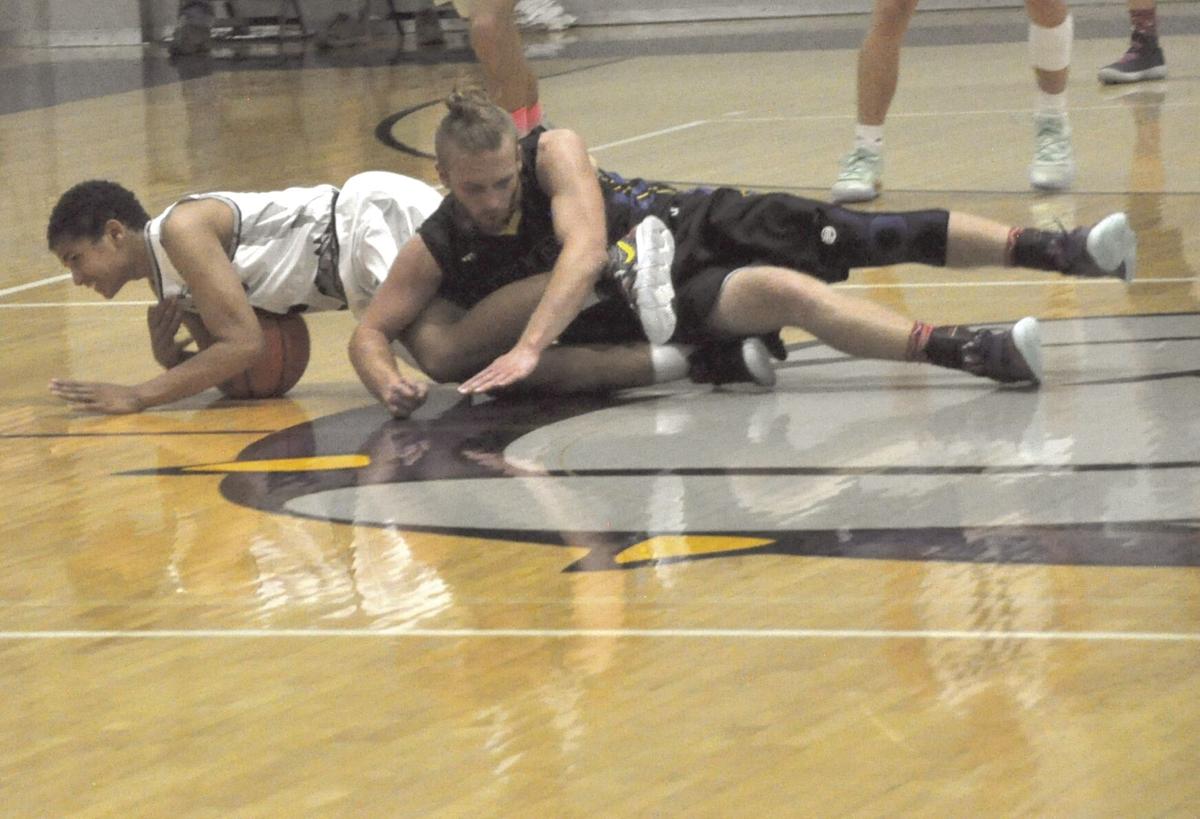 BAKER CITY — The effort was there all week for the Joseph boys basketball team.

And even though the shots didn’t fall in the second half Thursday, June 24, during a 54-41 loss to North Clackamas Christian during the fourth-place game of the 1A state basketball tournament at Baker City, head coach Olan Fulfer still felt that was the case.

“It definitely looked like we lost by a bunch more (than we really did). That was classic basketball,” Fulfer said. “My kids were trying hard. We couldn’t hit shots. They (NCCS) were hitting shots. That was a great-shooting team.”

Joseph (12-4 overall) never led Thursday, and appeared it would be sunk by an early barrage of 3-pointers by North Clackamas. The Saints hit five straight 3-pointers during one stretch in the first quarter, and were ahead 20-11 in the second when Luke Nelson hit a trey after two Saints’ offensive rebounds.

But the never-say-die attitude that carried the Eagles — one that brought them back from a 14-point deficit to defeat Siletz Valley in the tournament opener, that helped them battle Nixyaawii despite being down double digits most of the game in the quarterfinals, and that helped them stave off a massive comeback by Hosanna-Triad on Wednesday — helped them hang around Thursday. Hayden Hite’s 3-pointer and layup trimmed the margin to four. Then Mason Ferre — who seemingly carried Joseph all week and was the team’s leading scorer all four games — found his touch. After struggling much of the first half, Ferre, who scored a team-high 19 points, hit two free throws and followed with two 3-pointers, the second of which tied the score at 24-24 with 27 seconds to play in the half. That was the score at the break.

Joseph went cold in the third, not scoring for the first 6:40 while the Saints tried to pull away. But Ferre struck again, ending the scoring drought with a 3-pointer to make it 32-27, then draining another triple 19 seconds later for a 36-30 game after three quarters. At one point, he scored 14 straight points for the Eagles to keep them around.

A James Burney 3-pointer early in the fourth got Joseph within five, but the next nine points went to NCCS, and the lead grew to 16 points in the closing minutes as Joseph ran out of gas, not only due to the fourth game in four days, but playing a lot of that that stretch — and Thursday’s game — shorthanded.

“The games and heavy minutes caught up in the second half,” Fulfer said. “They hit tough shots and we didn’t.”

“Every shot he took it felt like it was going to go in,” Fulfer said. “He definitely had himself a tournament. He only made second team, and I felt he should have been first team. I felt he was one of the top players in the state.”

Joseph reached the fourth-place game by topping Hosanna-Triad 68-61 on Wednesday, June 23, bouncing back from a loss to Nixyaawii in the quarterfinals.

In the matchup against Hosanna-Triad, the Eagles hit three first-quarter 3s and built a 15-point lead at 21-6. Hosanna-Triad whittled away at the lead in a comeback attempt, and got within two points in the final minute, but the Eagles held on at the free throw line.

Three Eagles scored in double figures, with Ferre leading the way with 18 points, including seven in the first quarter to help Joseph to the quick lead. Chase Murray added 16 points — 10 in the second quarter — and Chase Homan netted 13 points. Nine players scored for the Eagles, who led 38-27 at the half and 54-45 after three quarters.

On Tuesday at North Powder, Joseph ran into a buzzsaw in Nixyaawii, which went on to win the state title. The Eagles fell behind by 14 points in the first quarter and never recovered as they lost, 67-39.

Tyasin Burns, who scored 21 points for Nixyaawii, had 11 of them in the first quarter as the Golden Eagles jumped to a 23-9 lead after one. The lead grew to 18 by halftime, then an insurmountable 32 points after three quarters, 61-29.

Ferre was Joseph’s leading scorer, finishing with 11 points. Burney and Blade Suto each added nine points in the loss.