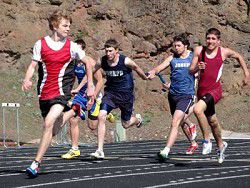 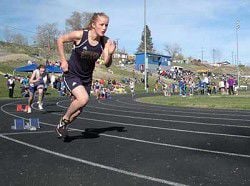 The boys took turns and completed their four laps in four minutes, 10.08 seconds. Stenkamp, also a sprinter in 100- and 200-meter races, ran the first leg. "I think we did all right, considering we hadn't had much practice," he said. "Our handoffs weren't very good. It takes a while to get in shape."

The Icebreaker was Joseph's second competition in as many days. The previous afternoon, at the Buck Classic in Pendleton, local boys and girls began this season by challenging athletes from bigger schools. They included the home team in Class 5A and Hermiston (Class 5A), four out of Class 4A (La Grande, Baker, McLoughlin and Ontario), as well as Washington's Walla Walla.

Over the two days, Joseph logged a number of strong performances.

Staigle also was one of the boys who set personal records in field events. Pole vaulting at Pendleton, he cleared the bar 10 feet high. He matched that the following day in Umatilla. Sophomore Anthony Smallen hurled his best discus, 109 feet and nine inches, good enough for sixth place. He also launched the shot put over 31-6. Sophomore Cole Warnock threw the javelin 129-6 at Pendleton. Next day, same event, sophomore Tyrel Warnock scored his farthest distance: 99-4.

Meanwhile, Joseph's girls got off to positive starts in Pendleton. There, sophomore Jade DeLury sprinted the 100 in her fastest time: 14.6 seconds. Sophomore Rebecca Cummins threw the javelin 67-9. Sofia Jerneld ran the 1,500-meter marathon and came back the next day for the 3,000.

This season now underway, Joseph is using this week to prepare for the next competition: the Carnival of Speed, April 2 at McLoughlin High in Milton-Freewater.