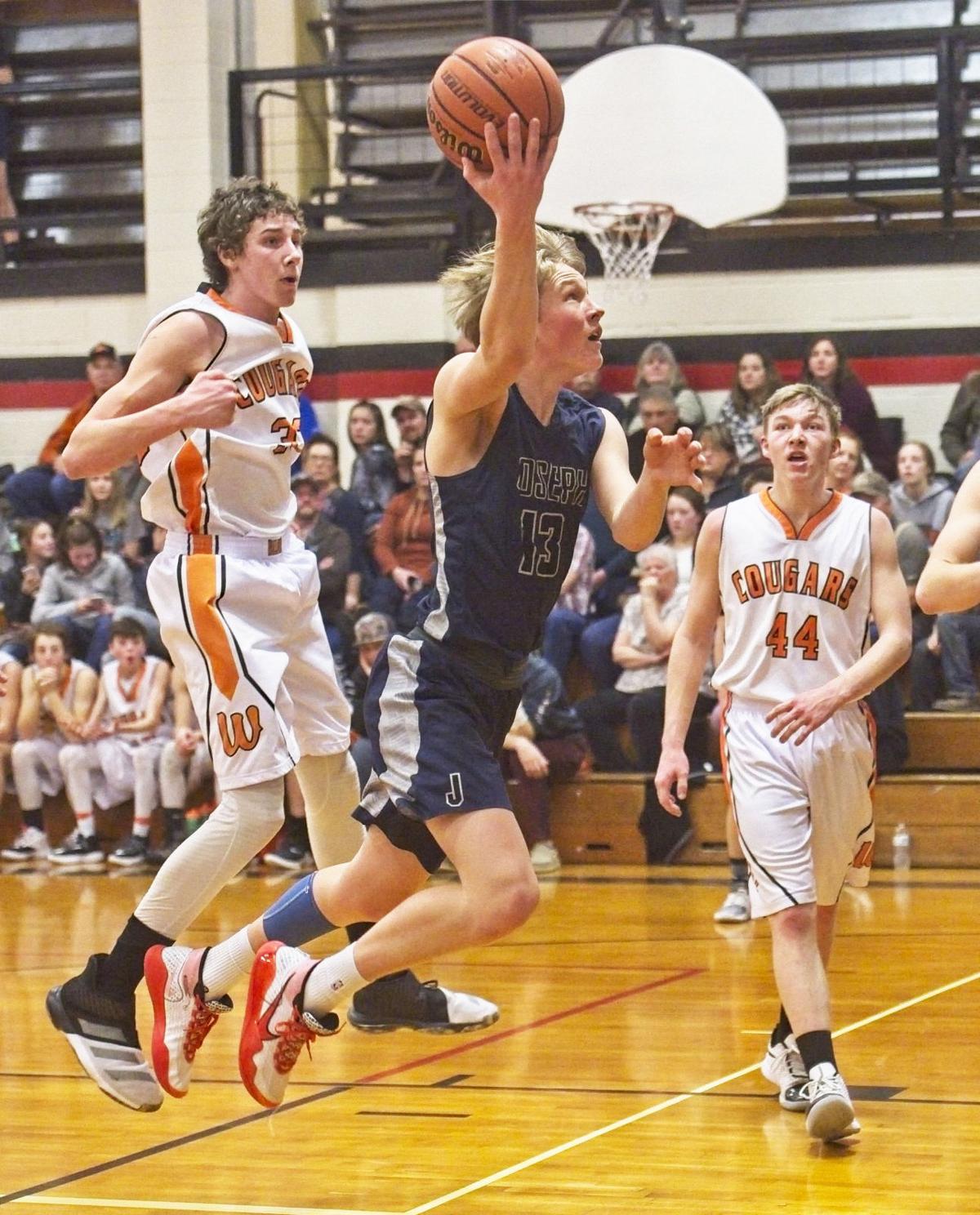 Mason Ferre takes the ball to the basket. 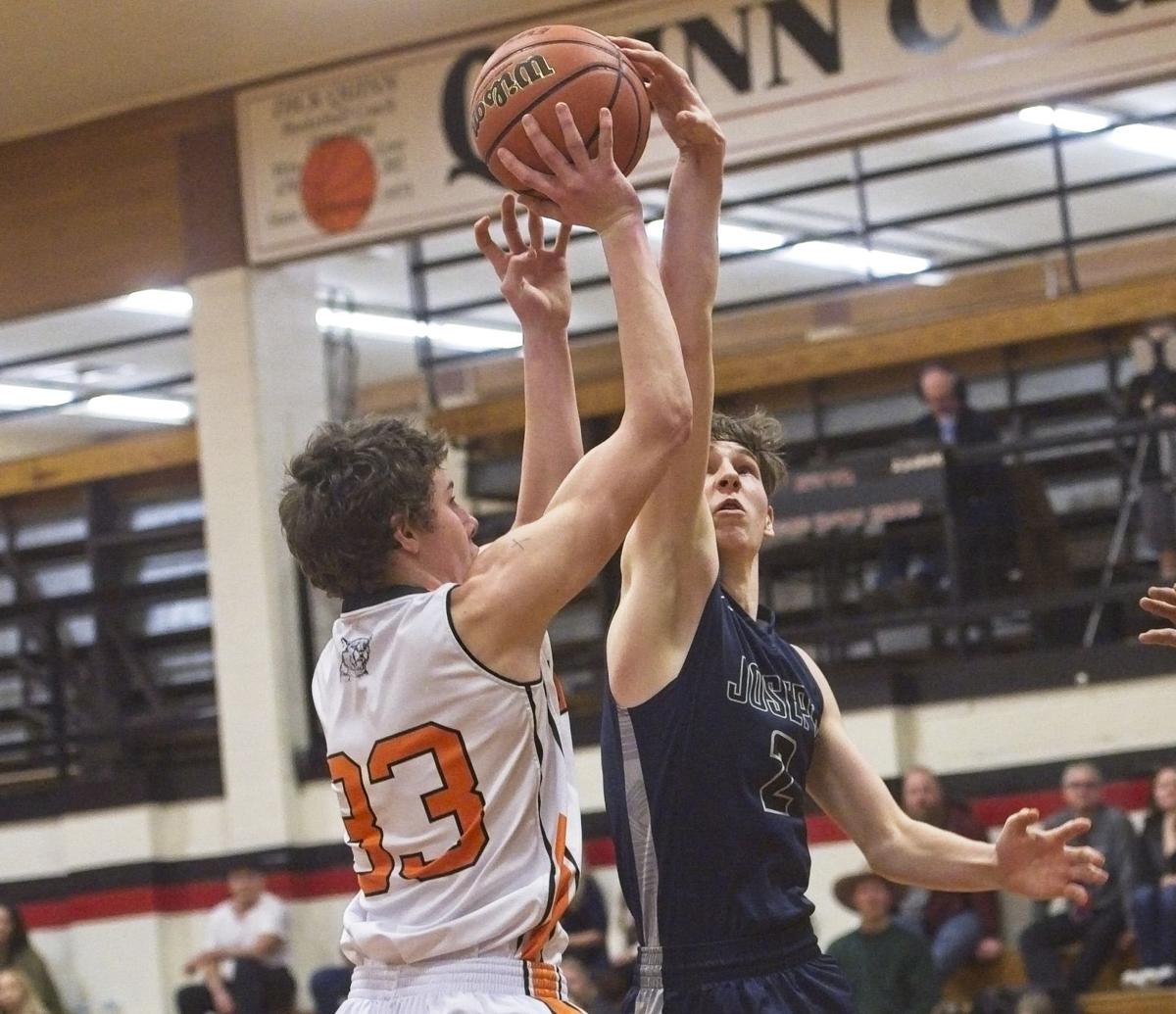 Chase Murray gets a hand on Kolby Mandal’s shot 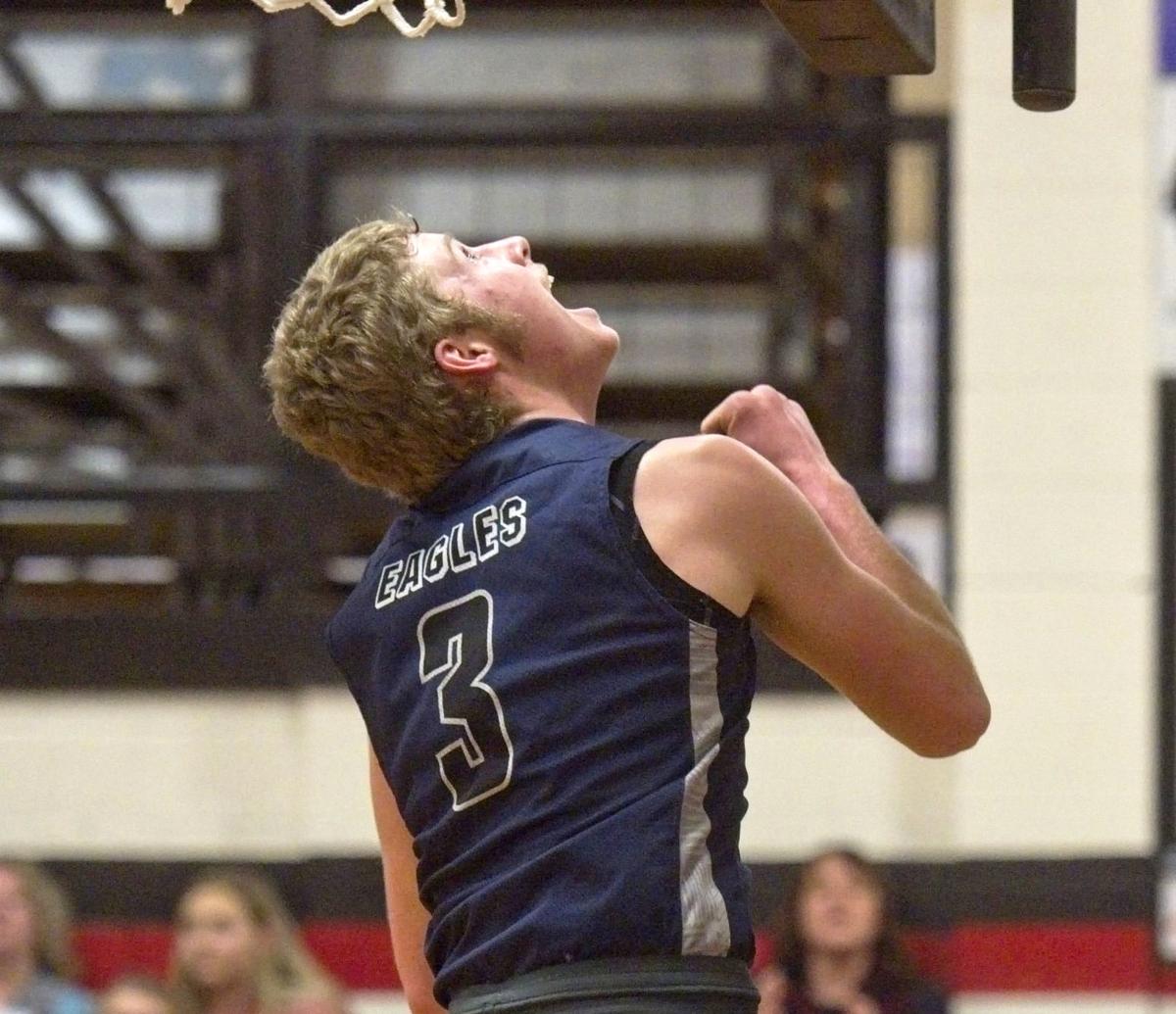 Hadley Miller celebrates as his lay-in falls through the hoop. 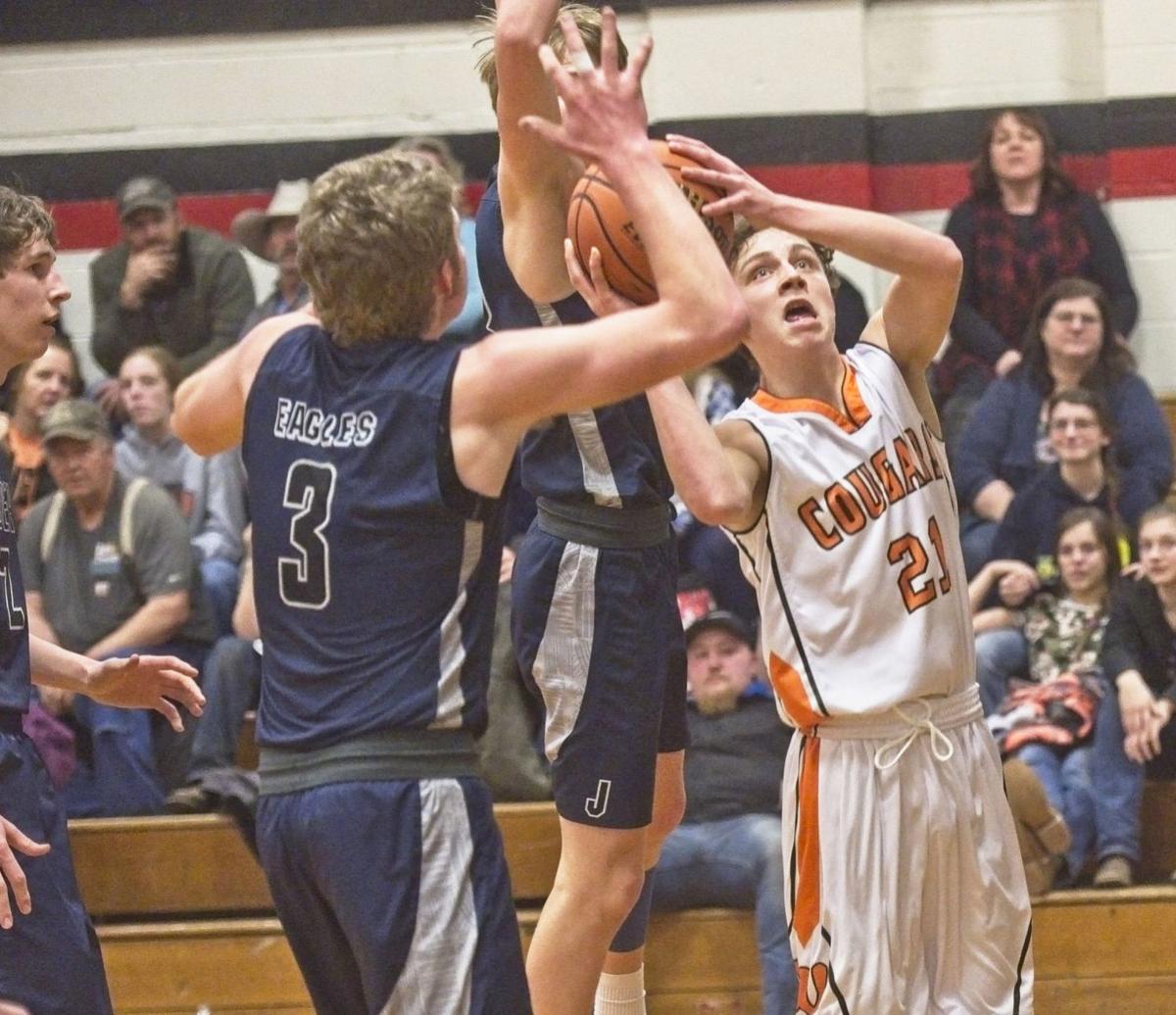 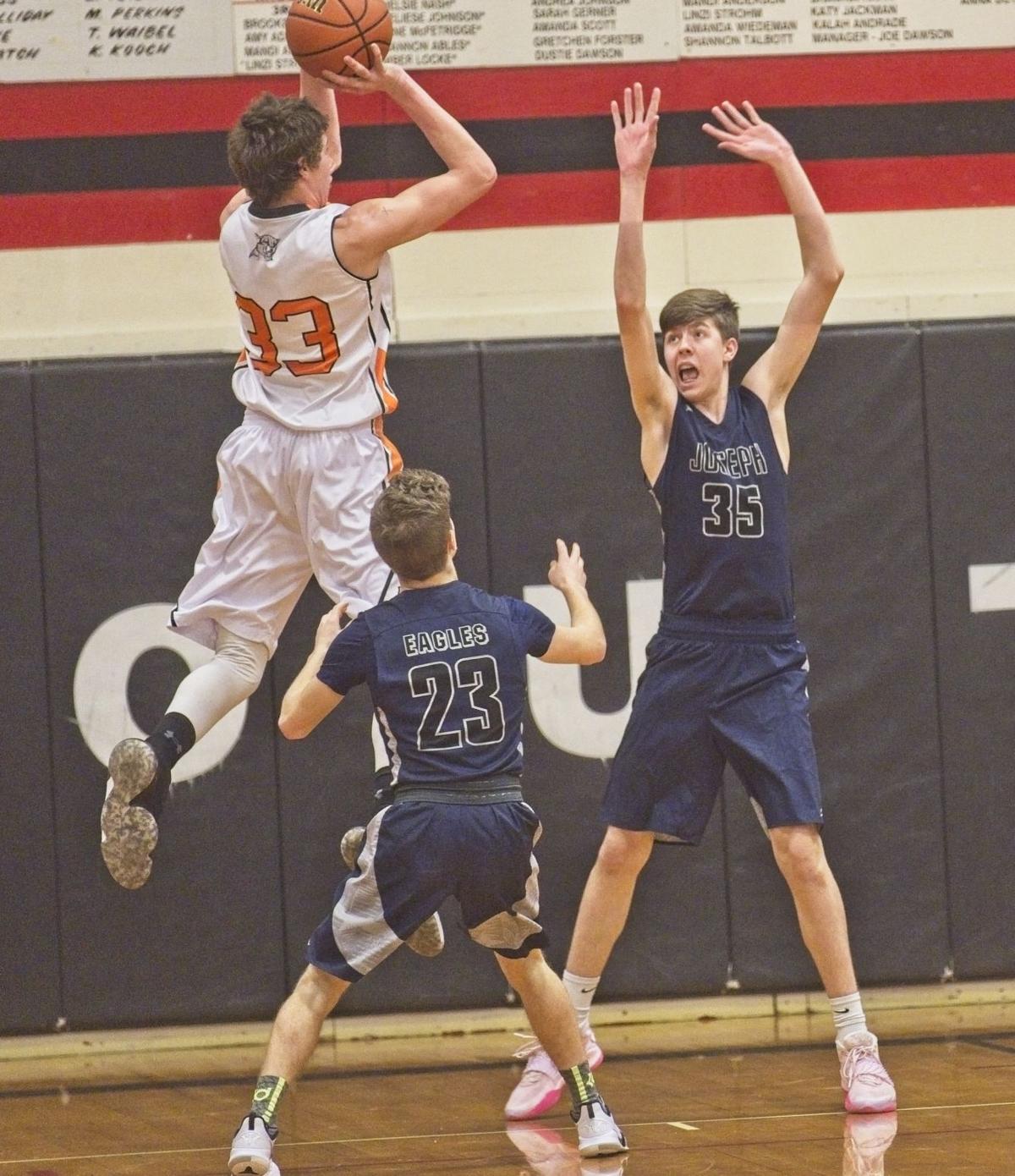 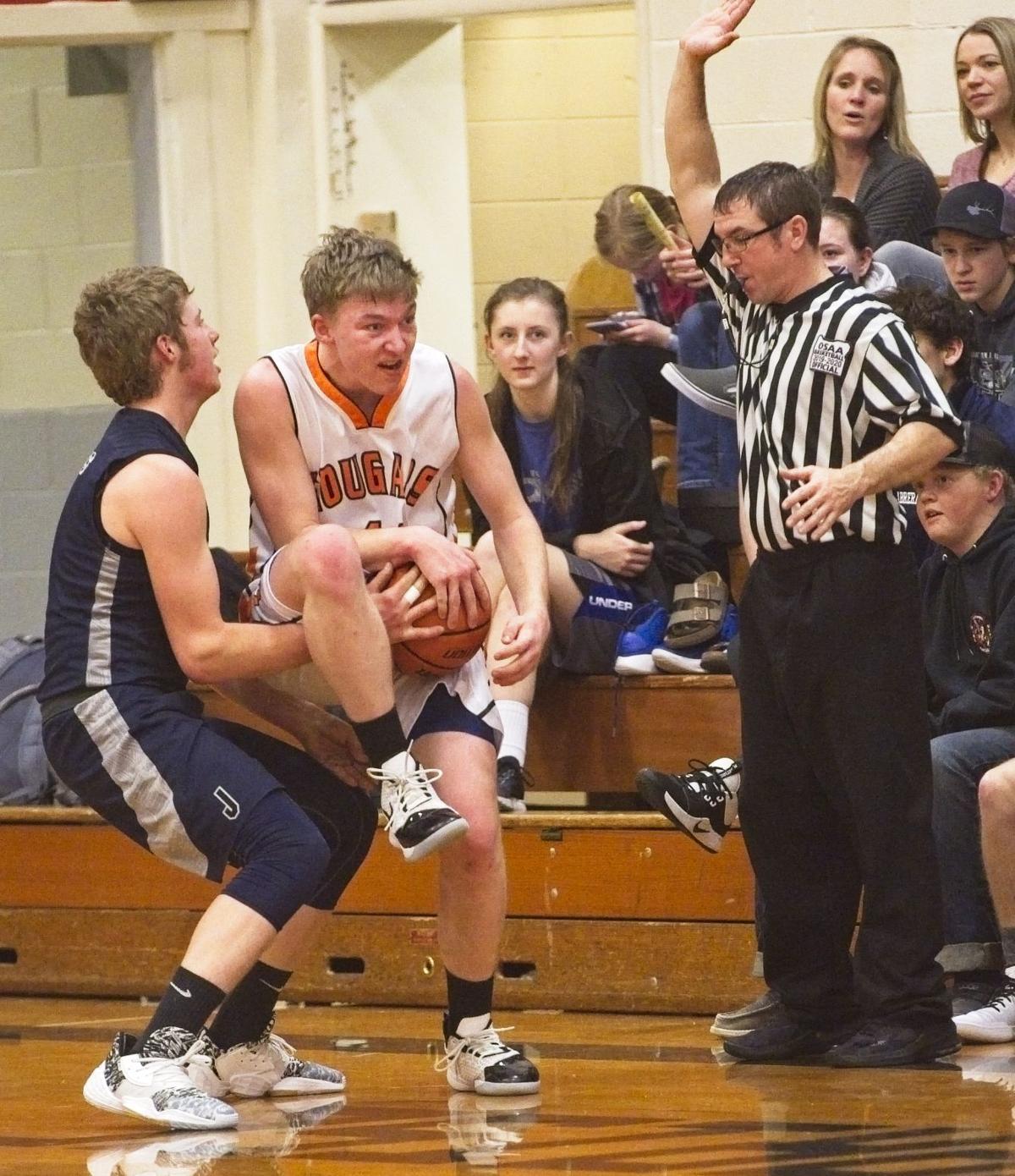 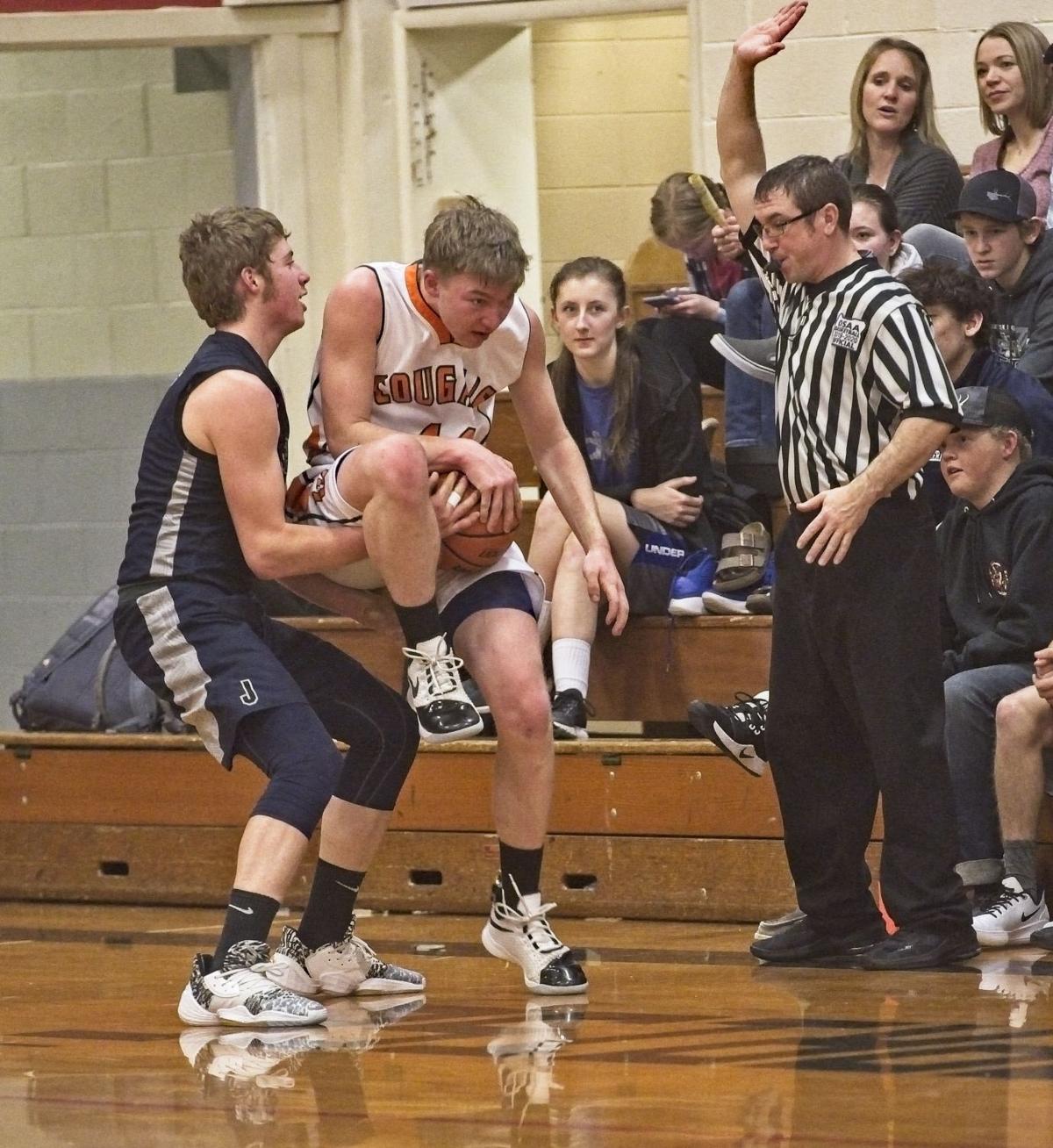 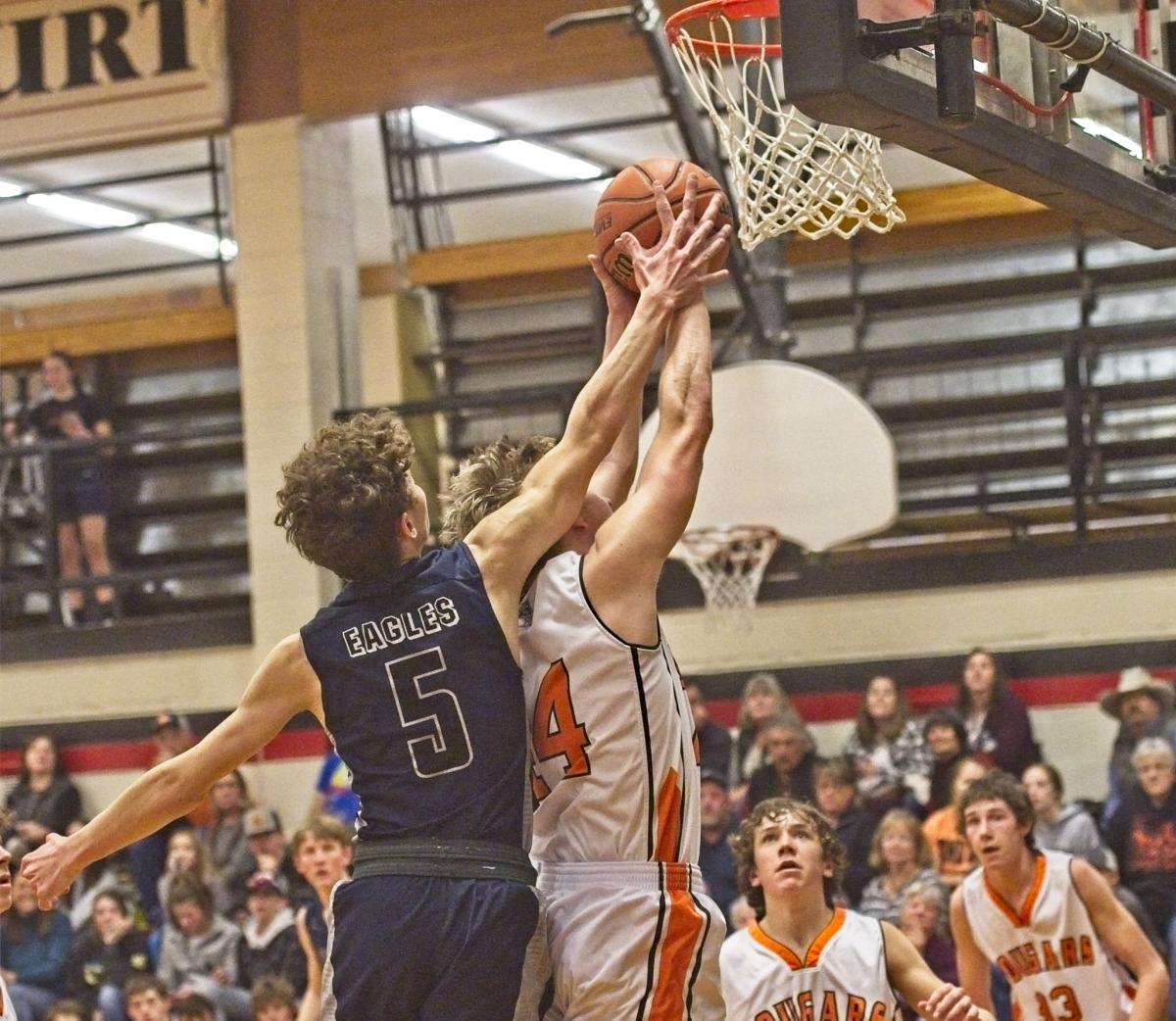 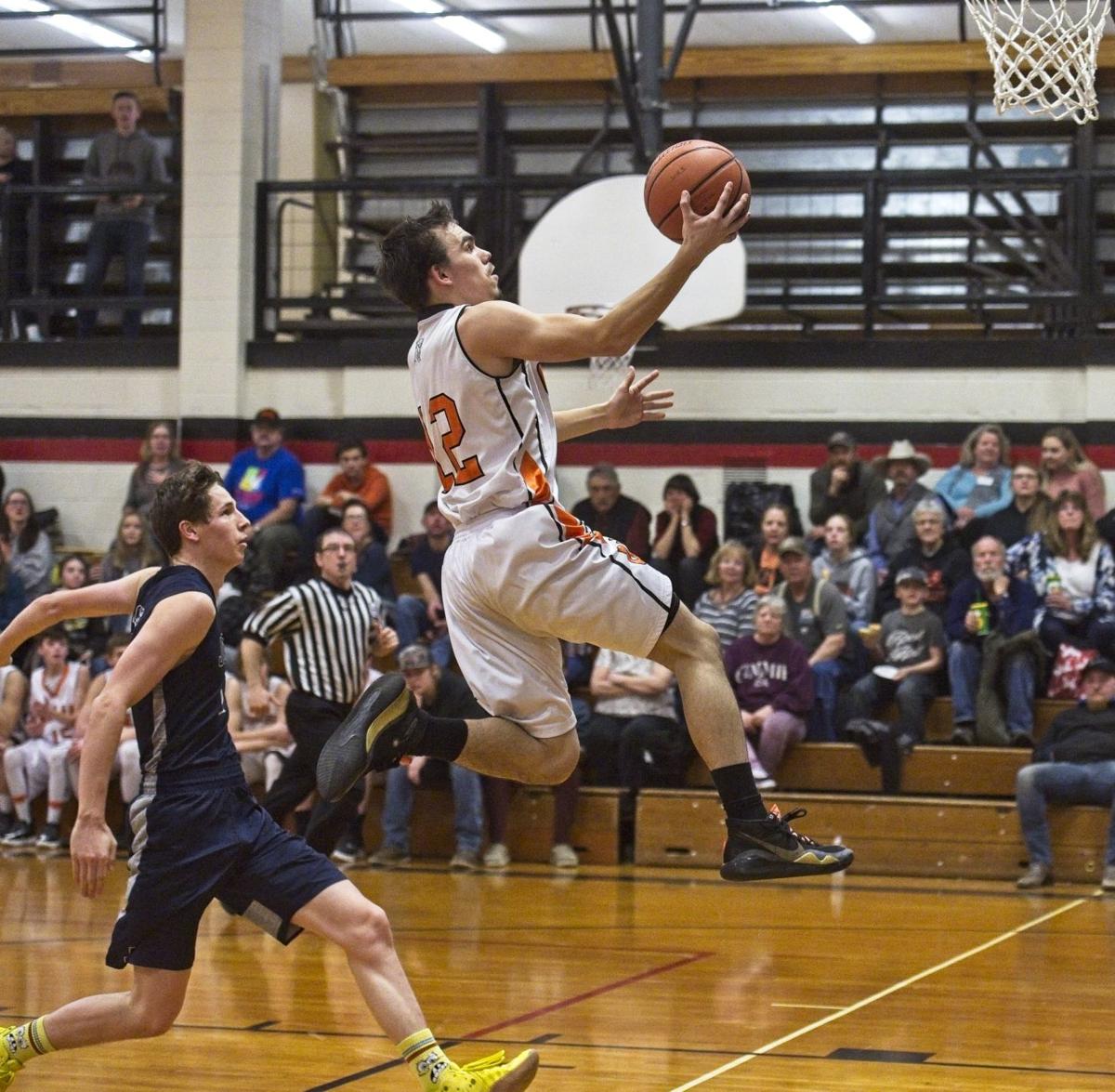 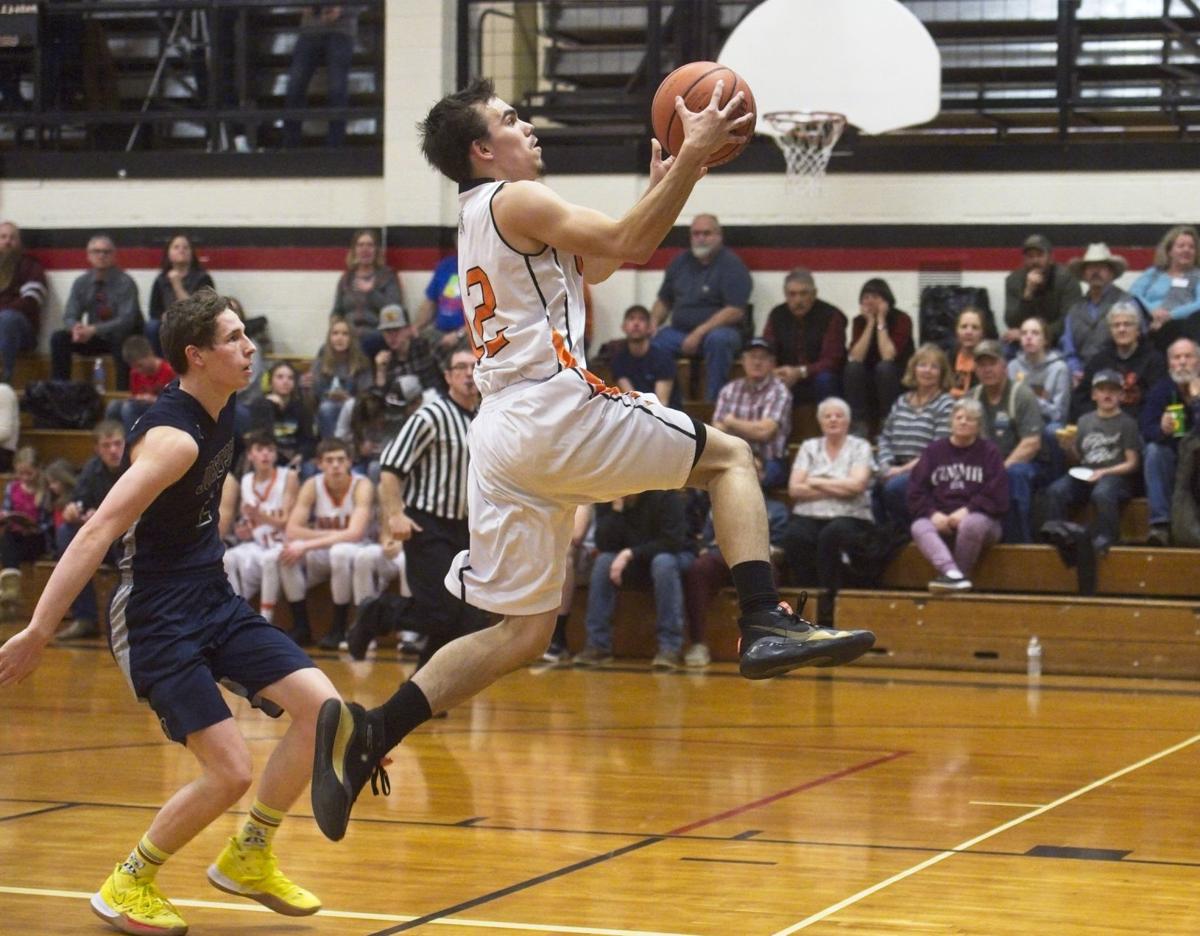 Tristin Bales drives to the hoop for a breakaway lay-in. 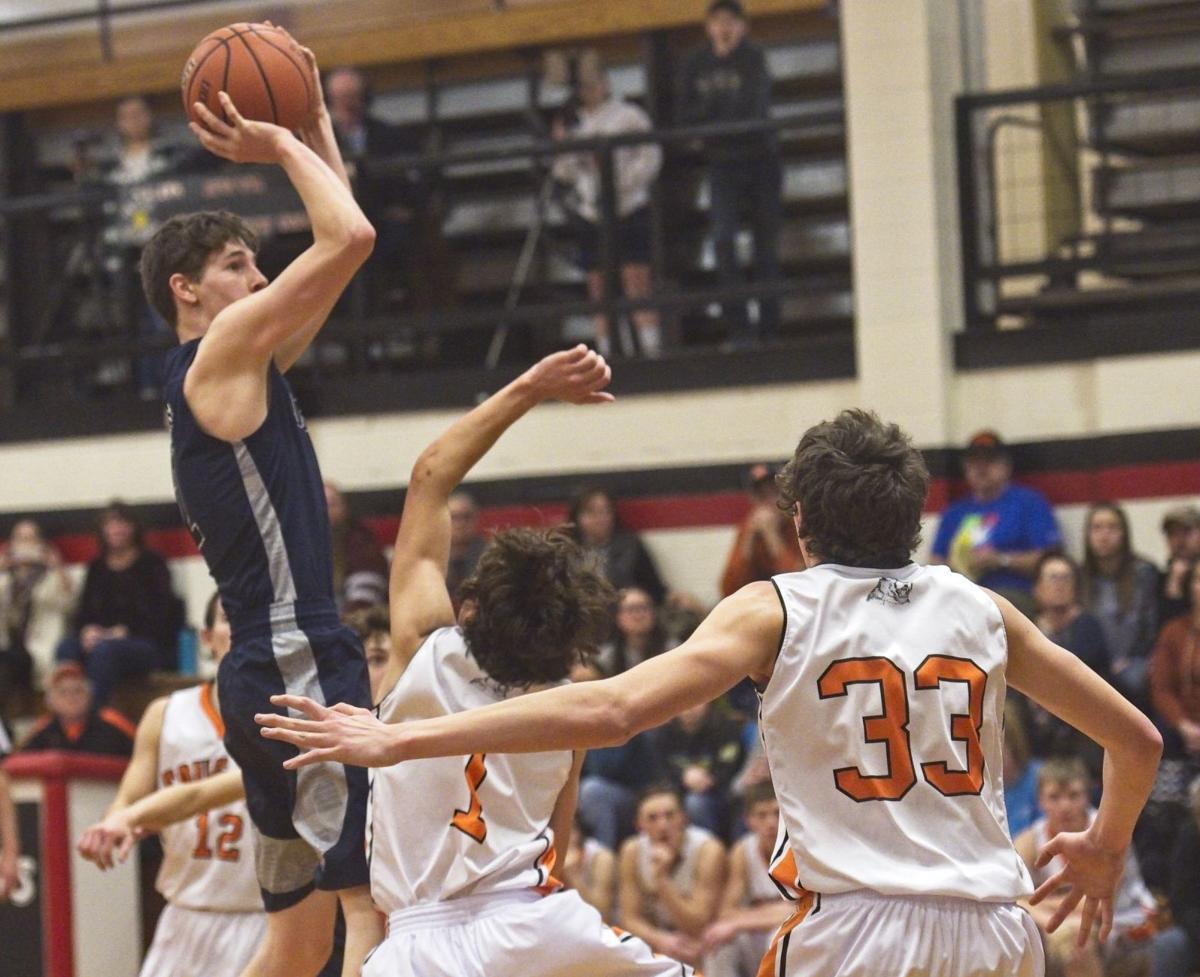 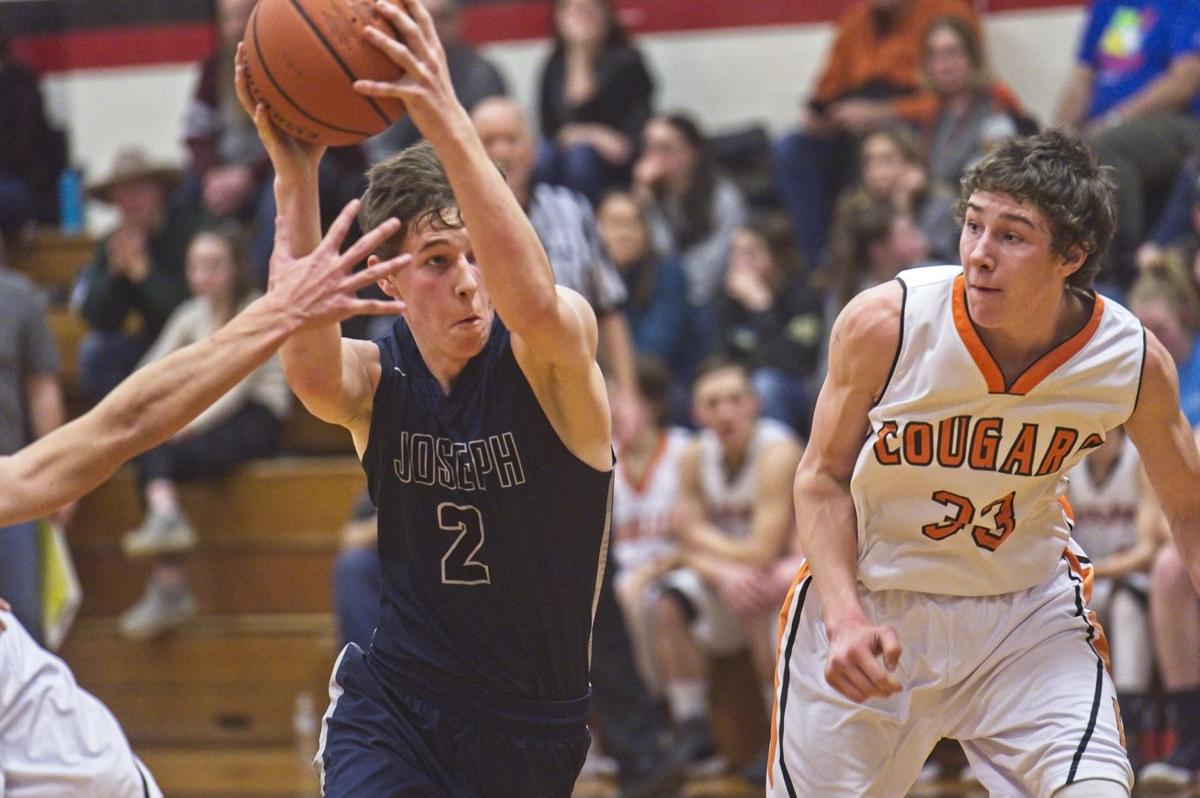 Chase Curry drive to the hoop. 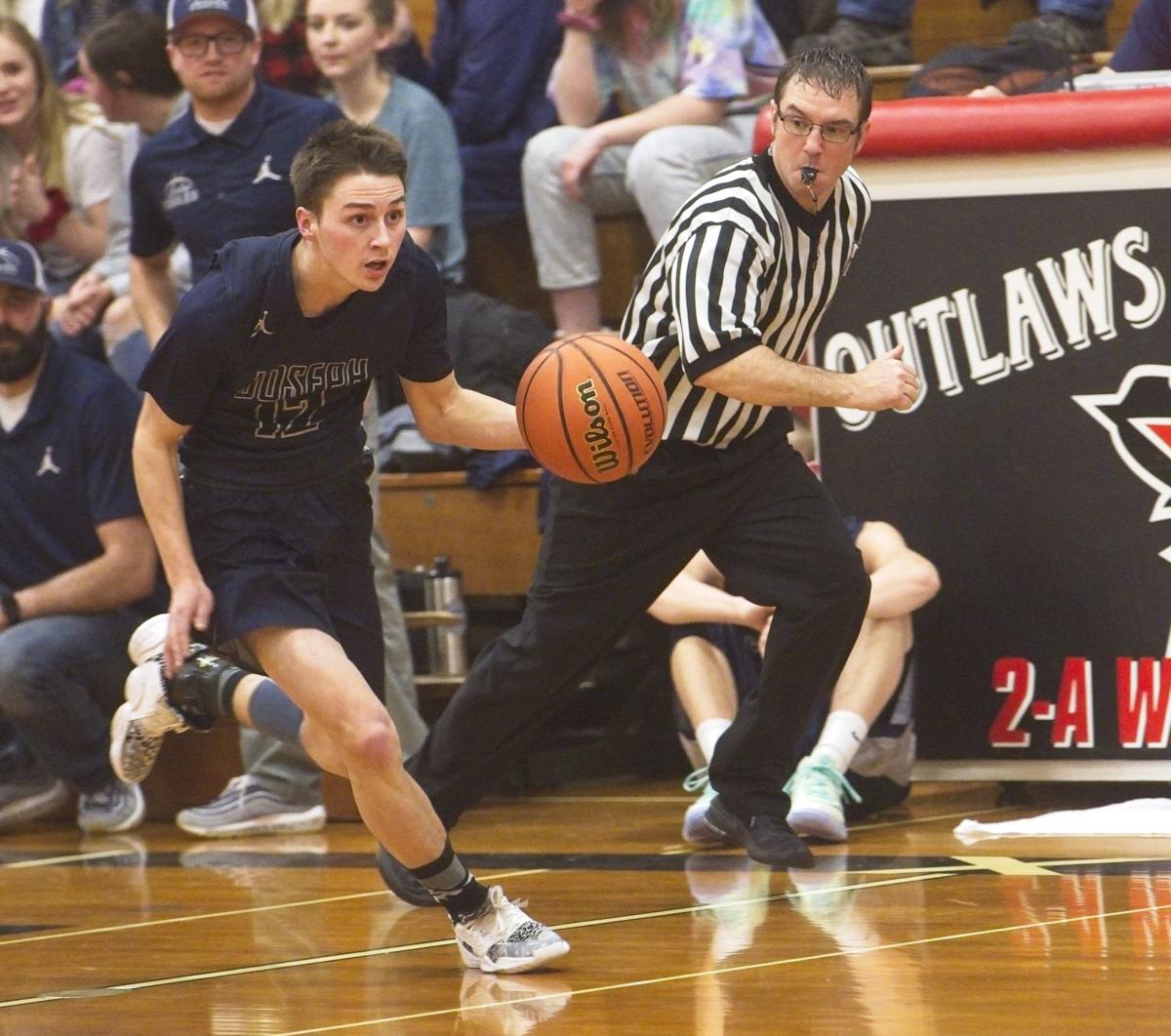 Carson Littlepage and a ref race down court.

Mason Ferre takes the ball to the basket.

Chase Murray gets a hand on Kolby Mandal’s shot

Hadley Miller celebrates as his lay-in falls through the hoop.

Tristin Bales drives to the hoop for a breakaway lay-in.

Chase Curry drive to the hoop.

Carson Littlepage and a ref race down court.

Joseph Eagles boys defeated a determined Wallowa Cougars basketball team Wednesday night at Enterprise 67-37. The victory was not as easy as the score might indicate. “Wallowa played with sheer heart through the whole game,” said Eagles coach Olan Fulfer. “They are a well-coached team. They made us a better team in that game, and I loved it.”

The first half of the game was dominated by Joseph. At the end of the first quarter the score was 23-7, and it seemed as though the Eagles were on track to reach the century mark. But Joseph’s momentum slowed in the second quarter and in the third quarter, Wallowa played tough. Joseph could muster only 8 points and the lead narrowed. The Eagles rallied in the 4th quarter but still could not muster their first quarter momentum. “The Cougar’s second half energy made the game seem much closer than the score indicated,” Fulfer said.

Wallowa’s top scorer, Tristin Bales, dropped in a total of 11 points, but went 3 for eight attempts. Kolby Mandal and Zeb Hermens contributed 7 points each. “We have been struggling with our efforts on offense,” said coach Cody Lathrop. “But we are learning to use a system, and to be more efficient in the way we play. We are doing less freelancing and working more as a team. We are building for the rest of the year, and we are getting better at it.”

For Joseph, Hadley Miller was one of two high scorers dropping in 9 two-point buckets for a total of 18 points, mostly on drives to the hoop and second chance rebounds. Chase Murray scored six two-pointers and two three-pointers that never even touched the rim for an equal total of 18 points. Carson Littlepage, Mason Ferre and Grahm Barber led free-throw scoring.

Lathrop admitted that in the first half, “Joseph beat us up down low near the basket. They were great in going from inside to outside,” he said. “They were rebounding well.”

But overall, Lathrop was pleased with his team’s progress. “Overall, we shot the ball better, and importantly, we had more balanced scoring, with more players getting hoops. As we learn how to execute plays and have a consistent system, those individual numbers will go up, and we’ll have more players scoring.”

“We’re learning how to work with one another, and to trust one another,” he said. “My job is not to win State every year, but to teach these players how to become men who are responsible and respectful, and can accomplish their goals in life.”

The Joseph Eagles boys’ team is now ranked fouth in the boys’ Old Oregon League (1A) behind North Powder, Nixyaawii, and Elgin --all with slightly better records in league play. With their overall 13-5 record, the eagles are ranked 7th overall in state 1A. They played Cove on Feb. 4th, and will meet Pine Eagle at Imbler High School Feb. 7